Everywhere I go these days the hot topic is Michael Schumacher. Will he or won’t he? Everyone wants to know. And this got me thinking back to 1984.

I can hardly believe that more than a quarter of a century has passed since I stood at Paddock Bend watching Niki Lauda win the British Grand Prix at Brands Hatch. It was late July, a hot day, with a huge crowd and the start of an extraordinary domination by the McLaren MP4/2 TAG Porsche. Between that weekend and late October, every GP was won by either Lauda or Alain Prost. 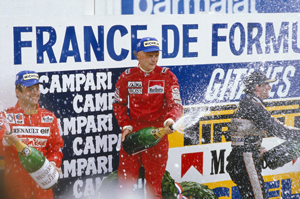 Lauda was two years into his Formula 1 comeback. In 1982 he’d won his third race, so we all knew he’d lost none of his skill. Now only Prost stood between him and another world title. The other thing about that ’84 season was fuel stops had been banned and tank capacity reduced. This posed no problems for the crafty Austrian. But he was 35 years old, not 41 as Schumacher will be this year. And, by mid-season, he had the best car. 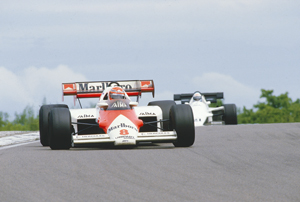 Lauda’s victory at Brands was typically measured, the former champion looking after his fuel and tyres while Prost and Nelson Piquet stormed away from the front row of the grid. Lauda was happy to watch and wait. But on lap 12 Jonathan Palmer crashed at Clearways and the race was stopped. After Palmer’s stricken RAM had been removed to safety the race resumed over 60 laps. Prost went into the lead but retired with a broken gearbox, leaving Lauda to fend off Piquet. But the Brazilian fell away with a broken turbocharger on the Brabham-BMW and Lauda cruised home ahead of Derek Warwick in the Renault RE50. Job done. And no points for Prost.

A young Brazilian named Ayrton Senna was on the podium that day, having finished a determined third in the Toleman-Hart. But that’s another story.

What we learnt at Brands was that a ‘senior citizen’ can come back, win races and claim another championship, even if it was by only half a point. But he had a strong team-mate in Prost, a man six years his junior – and a man on a mission after quitting Renault to join McLaren. 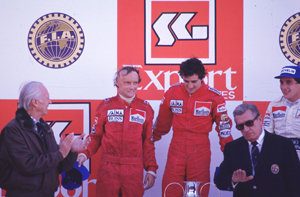 I’m not suggesting that all this has any bearing on the return of Schumacher. But it is fascinating to look at seasons past, especially a year in which it appeared that at least three drivers were in with a strong chance of winning. Schuey will need the best car, and he’ll need some luck. We know about his racecraft and his – and Brawn’s – ability to make the best of the rules…

Tomorrow Schumacher starts testing at Valencia in the new 2010 GP2 car, by special permission of the FIA and rival teams. It is a sign of his intent.