This weekend’s F1 championship decider could come down to a strategic fight rather than a wheel-to-wheel duel in Abu Dhabi after Friday’s FP2 session showed Red Bull taking a split approach.

Max Verstappen’s strong long-run pace on soft tyres suggests that the compound could be an option for the race, even if an extra pit stop is required.

But neither team has revealed its full hand yet, with setup differences and unknown engine modes in play for the FP2 session – the only practice that takes place at the same time of day as the race.

Project F1’s data analysis from the session above shows Verstappen was fastest of drivers from the top two teams on a six lap soft-tyres run. A medium to hard compound strategy was thought most likely going in to the weekend.

The range of times he set was tight, increasing confidence that the pace is representative, and his average lap was around 0.7sec faster than that of Hamilton’s eight lap medium stint. 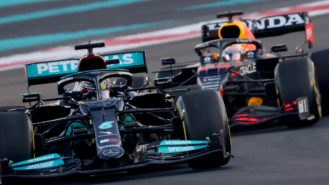 Lewis Hamilton laid down his marker against title rival Max Verstappen, fastest in FP3 by two-tenths of a second

It’s an indicator that Red Bull has good race pace at this stage of the weekend, with Pirelli estimating that there’s a 0.6sec difference between the compounds.

Perez’s six-lap medium run was slightly quicker on average than Hamilton’s. If this did translate to race pace, he would be a thorn in Mercedes’ side, able to slow them down from in front, or bounce them into a compromised strategy by pitting early and threatening the undercut.

The latter looks more likely at the moment, with Mercedes dominant on single-lap pace: Hamilton’s fastest lap of the session was 0.6sec faster than Verstappen’s.

There are still adjustments to be made, with Red Bull collecting plenty of data after running different setups yesterday.

As ever, teams will have until Q2 to decide on the tyres they use to start the race. Red Bull could gamble that the soft tyre will give Verstappen the extra grip he needs to take the lead needed for a soft tyre strategy, even if he starts on the second row of the grid. He may elect to start on the medium with a flexible strategy dependant on track position.

But with just a handful of FP2 laps to go on and the simulators for both teams undoubtedly running throughout the night, there’s no telling what will actually play out on Sunday.