The wraps are off one of Formula 1’s worst kept secrets, after Williams Martini Racing was officially launched in London.

The Mercedes-powered Williams FW36 might not have the angular elegance of a Brabham BT44B, but it shares a similar livery – including the familiar pinstripes that have also adorned F1 cars from Lotus and Tecno, Le Mans Porsches, DTM Alfa Romeos, many a rallying Lancia and others besides.

The marketing types insist this is a marriage of like-minded institutions, but that’s a sizeable slice of PR fantasy. Both might be traditional, family-run companies, but there is a considerable gulf between Williams’s no-nonsense work ethic and the frivolous decadence Martini likes to attach to its vermouth.

Martini is already making a fuss about its motorhome’s rooftop terrazza that will, it says, be the place to be seen in F1. It’s hard to imagine anybody in the pit garage giving a hoot, so long as the car is quick – but that’s where the association might just work, as the team regains some of its bygone financial clout.

With 10 days to go before the opening race, there is a genuine sense of momentum around Williams. Felipe Massa set fastest time during the most recent pre-season test in Bahrain, when the FW36 proved to be durable and swift in equal measure. Between them, Massa and team-mate Valtteri Bottas accumulated 439 laps over four days, 88 more than pre-season favourite Mercedes-Benz.

Last summer the Brazilian wasn’t certain he had any kind of F1 future, yet he enters 2014 in what might just be the best car – leastways at the campaign’s dawn.

Click on the images below to view a gallery of Martini Racing’s history: 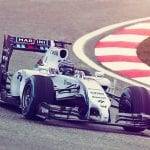