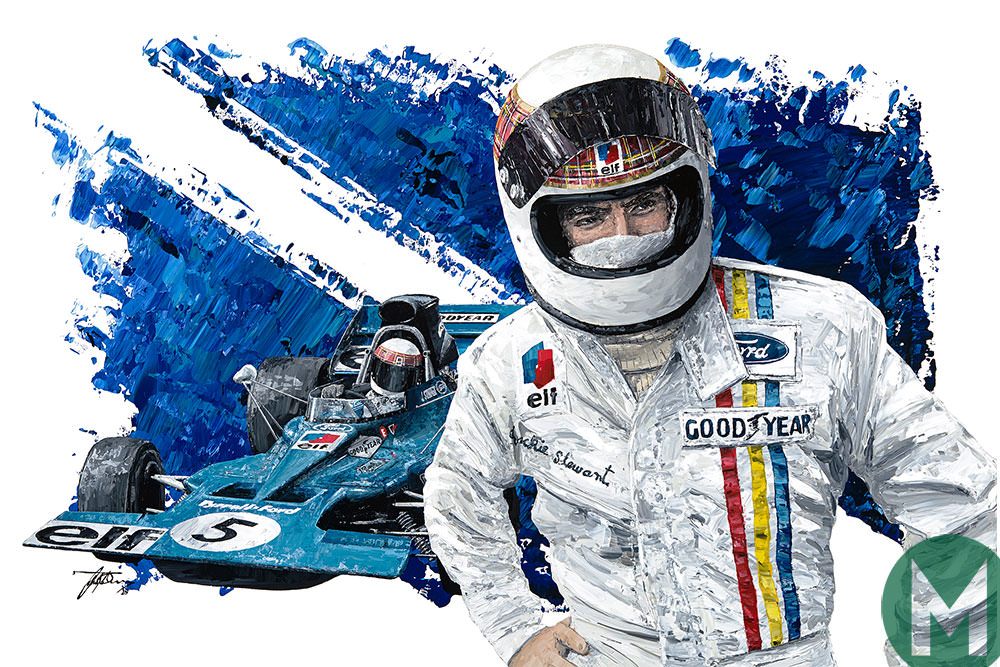 Three-time Formula 1 world champion Sir Jackie Stewart has signed a very limited run of prints and one of them could be yours. Just download the app and enter the competition crossword.

The print depicts Stewart with the Saltire draped behind him and his Tyrrell 003 in the background and measures 23×31 inches.

It’s been produced by Formula Art, which features the art of David Johnson. He’s created high-quality prints signed by the likes of Nigel Mansell, Sir Stirling Moss and Jody Scheckter.

The Tyrrell 003 propelled Sir Jackie to his second Formula 1 championship win of three in 1971, plus it took Tyrrell’s only constructors’ championship.

Tyrrell and Stewart had taken their first titles in 1969 with a Matra chassis. The French concern then for 1970 wished to pair its own V12 engine with its chassis rather than let Tyrrell continue with the class-leading Cosworth DFV. Tyrrell and Stewart were not impressed by Matra’s V12, so instead ran the new but utilitarian March 701 chassis in 1970 with mixed success. 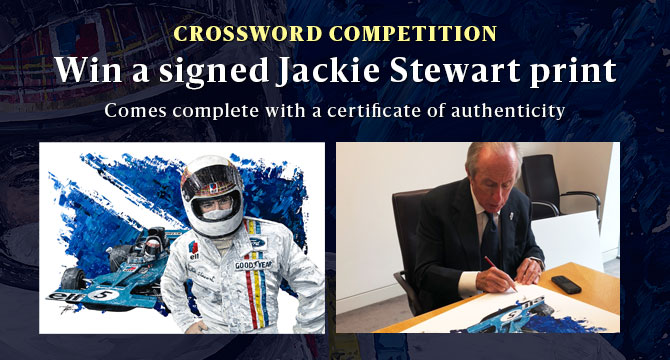 Tyrrell therefore quickly started work on a car of its own design, the 001 from the pen of Derek Gardner, which still in French national colours and with ELF sponsorship made its debut late in the 1970 season.

It was first seen in the Oulton Park Gold Cup non-championship race, then in the final three championship rounds of the year in North America.

It certainly had pace as Stewart first pulverised the Oulton Park lap record then put the car on pole for its championship debut at Mont Tremblant. He also started second at Watkins Glen and Mexico City. However, it didn’t finish any of the races.

The 003 introduced for 1971 was very similar to the 001, and with it Stewart dominated the year, winning six of the 11 races and sealing the drivers’ title with three rounds remaining.

Stewart was backed up by his team-mate and friend François Cevert, who drove a 002 which was essentially a 001 with detail changes, and Cevert took what sadly was to be his only Grand Prix win, in the Watkins Glen season-closer. It all meant Tyrrell dominated the constructors’ race too, finishing with more than double the points of its closest challenger, BRM.

The Tyrrell 003 also is on display at the National Museum of Scotland in Edinburgh.

And now you can own a print of it signed by Sir Jackie Stewart himself.

Want to win the print? Enter the competition on our app