The final shortlist for the next female Ferrari Academy Driver (FDA) has been decided after a day of scouting during a training camp at Paul Ricard.

Under the watchful gaze of a six-member jury including Formula 2 and Sauber junior driver Théo Pourchaire, the shortlist of 14 was whittled down to a final four.

The four contenders will battle to follow Maya Weug, the initiative’s first winner, into the FDA and for the chance of earning a season in Formula 4 with the Iron Dames team. 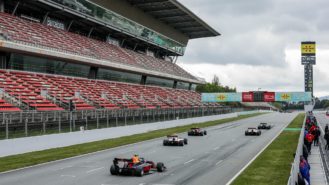 Each of the finalists will undergo a final stage of evaluation over the course of another four-day training camp. Assessments aimed around single-seater and Formula 4 racing at Maranello will then determine the next FDA driver.

“It is always a pleasure to see such commitment and determination from our young racers, and to witness how much they have absorbed and developed over such an intense period,” President of the FIA Women in Motorsport Commission Michèle Mouton said.

“Congratulations to all the drivers who attended and to the eight heading to their final Scouting Camps; it is an incredible once-in-a-lifetime opportunity for them to impress the Ferrari Driver Academy.”

Pourchaire, who was present at Paul Ricard throughout the assessments said that the opportunity provided is crucial to the development of female racing drivers in the youngest categories.

The Frenchman has plenty of experience with academy support in the junior categories himself. He remains part of the FFSA Academy and was snapped up by Sauber’s junior driver programme in 2019.

“It is really important because first of all, motor sport is really expensive. It is important to have support from an academy or Girls on Track and the FIA,” he said. ”

“So you have help financially but it can also help the drivers technically, for many, many things. An academy can help you develop how to set up a car and talking with your engineers which is super important.”

The final F4 scouting camp will take place between November 9-13 at Ferrari’s base in Maranello.