More than half of the current Formula E season will be run at the same location, after organisers announced that Berlin Tempelhof Airport would host the final six races.

Three different track layouts will be used for the August races, which offer a way for the series to beat Covid-19 restrictions by basing teams and drivers in one location for the nine-day event.

A midweek race, on Wednesday 5 August will open proceedings, with a second race taking place the next day. Another pair of races will be held on the weekend of 8-9 August, with the final two running on 12 and 13 August.

The revised calendar makes up to 180 points available to drivers, opening up a championship where 29 points currently separate the top six.

António Felix Da Costa currently leads the series with 67 points after five races – the first of which was in Saudi Arabia in November last year. He’s followed by Mitch Evans on 56 points and Alexander Sims with 46.

Each ePrix will be held behind closed doors, and there will be a maximum of 1,000 people on site at any time, with teams limited to 20 staff each.

All individuals will be tested for coronavirus before the start of the event, and there will also be daily screening, the mandatory use of face masks, and restrictions on movement around the venue. 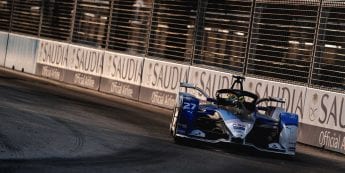 Formula E's first race of the season introduced a new name to the winner's list and there may be more than meets the eye too... Alexander Sims dominated the opening…

“We’re heading to Berlin Tempelhof, a venue that our teams, drivers and fans love, to stage a nine-day festival of racing with three back-to-back double-headers,” said Jamie Reigle, CEO of Formula E.

“The festival will feature three track layouts, presenting a new challenge and creating the conditions for an unpredictable and drama-filled climax to our season.

“The team at Formula E has been working incredibly hard over the past weeks to enable us to go racing again in Berlin. I’d like to thank the FIA, our manufacturers, teams and partners for their continued support, the city of Berlin for their cooperation and flexibility and our fans for their patience.”

Before the coronavirus outbreak, Formula E had been due to end its season in July with a New York race, followed by a double-header in London at the Excel Centre – which became a Nightingale Hospital.