A blue plaque in commemoration of Sir Stirling Moss has been unveiled at Shelsley Walsh as a permanent memorial to ‘Mr Motor Racing’, paying tribute to the numerous achievements from his career.

Moss began his career competing in hill climb events and competed at Shelsley on several occasions. He finished first in his class on September 25, 1948 and set the fastest un-supercharged car record on June 11, 1949. He also set the fastest time of the day on his visit on September 24, 1949.

“Stirling never won a world championship but he captured the imagination of motor racing fans across the world,” said Motor Sport Editor, Joe Dunn, who unveiled the tribute this afternoon. “This plaque is a fitting tribute to Britain’s greatest racing driver.”

The memorial was been created by the Worcester Civic Society, which promotes the heritage of the city and county.

Moss joins several other eminent figures who are commemorated with a blue plaque for their achievements in the region. These include another great sporting all-rounder, Tip Foster, the only man to have captained England in cricket and football, as well as Edward Elgar. 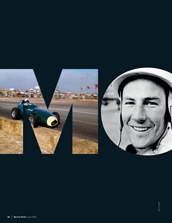 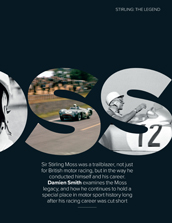 "Motion is tranquility" That was the motto by which Stirling Moss always lived. But for most of 1962 everything came to an abrupt halt for the-then 32-year-old, when he hit…

Also taking part in the ceremony was Moss’s biographer, Philip Porter. “He was the English crusader who went to foreign lands and, against the odds, conquered,” he said.

“That he became known as ‘Mr Motor Racing’ says it all. His victory in the 1955 Mille Miglia is remembered as one of the greatest sporting achievements of all time.”

On display at the unveiling of the plaque was Moss’s own Jaguar XK 120. The vehicle in question was used by Moss to drive all over Europe between the numerous racing events he competed in from Formula 1 grand prix to rallying specials.

Moss’s first International Tourist Trophy victory came at the wheel of an XK 120 just ahead of his 21st birthday in 1950. He went on to add a further six victories in the event throughout his career.

The car will be among those on show at this weekend’s E-type 60 event at Shelsley Walsh.