On the road in June: Simon Arron explores a British racing summer’s boundless options, including history in Hampshire, America in England and the unbridled joy of a day at Shelsley Walsh

Flame academy: the 560bhp Sierra RS500 of Paul Mensley and Matthew Ellis torched the chicane kerbs on almost every lap of Thruxton All images: Simon Arron

Time was that race meetings would be scattered around the land as an occasional treat, but no more. Casting aside speed events, rallies, sporting trials and other automotive delicacies, there were several simultaneous race meetings on the opening weekend of June – and more yet on the second, shortly before a significant chunk of the nation set sail for the north-western French pilgrimage that is Le Mans. Too much of a good thing? Perhaps so, not least because science has yet to devise a way of being in several locations at once…

The BBC weather app forecast 25 degrees and blazing sunshine, but technology is wont to be mendacious. En route, the sky remained defiantly blue until about 15 miles east of Thruxton, whereupon an impenetrable fog blanketed much of Hampshire. It wasn’t just that you couldn’t see one side of the paddock from the other, more that it was impossible to view both ends of a Ford Falcon at the same time.

But the haze eventually lifted and Thruxton came alive, not just through the delicious rasp of internal combustion but thanks also in part to skylarks overhead and linnet flocks that add a vibrant soundtrack to the hedgerows bordering the circuit’s far perimeter. 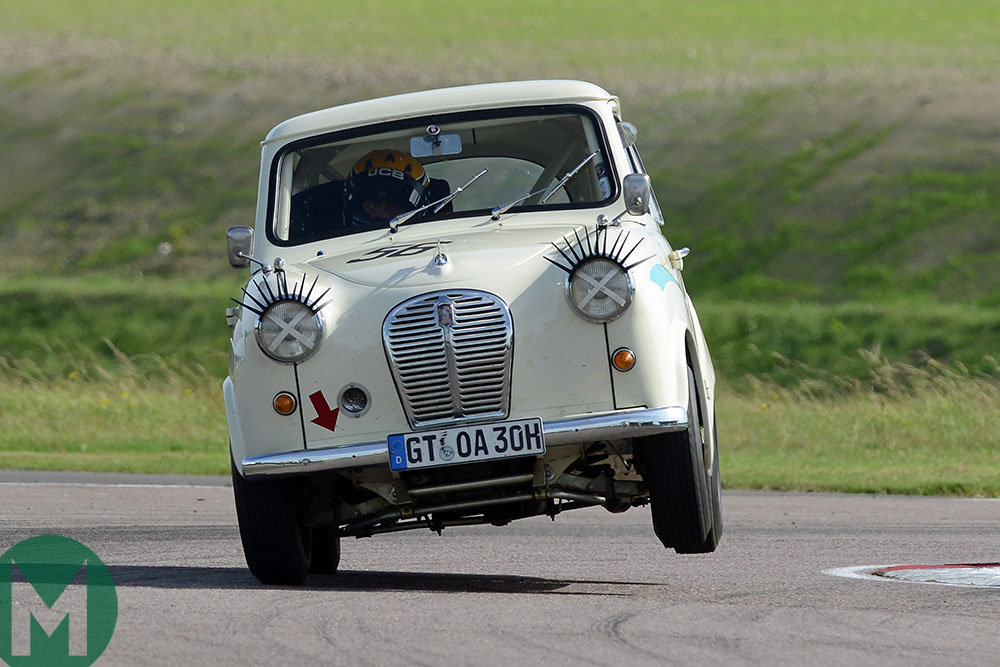 High hopes, high hops: Andy Newall was spectacular in the extreme aboard the Austin A35 he shared with Rhea Sauter

New this year, and allocated two of the venue’s 12 licensed racing days per annum, the Thruxton Motorsport Celebration is a BARC initiative intended as an annual feature and was designed to build on the popularity of last season’s 50th anniversary celebrations. The good news? As with Goodwood (and bits of Lydden Hill, come to that), the circuit’s brisk sweeps are perfectly tailored to cars with quaint features such as suspension travel. The bad? There simply weren’t enough of them in certain races – a 40-minute contest featuring just 10 cars was never likely to be much of a draw, even if seven of them were Lotus Cortinas.

There were some very good bits, mind – Andy Newall’s handling of an Austin A35 (often on three wheels, occasionally apparently on one), flame-spitting Sierras and Mustangs, a healthy assembly of Ford Capris, a strong Sports 2000 entry and a Spitfire flypast – so solid foundations are present and correct.

Many of those present showed ample commitment on track; those absent need to show similar zeal when it comes to filling in entry forms (though it probably didn’t help that there was a clashing Historic Sports Car Club fixture at Snetterton)… 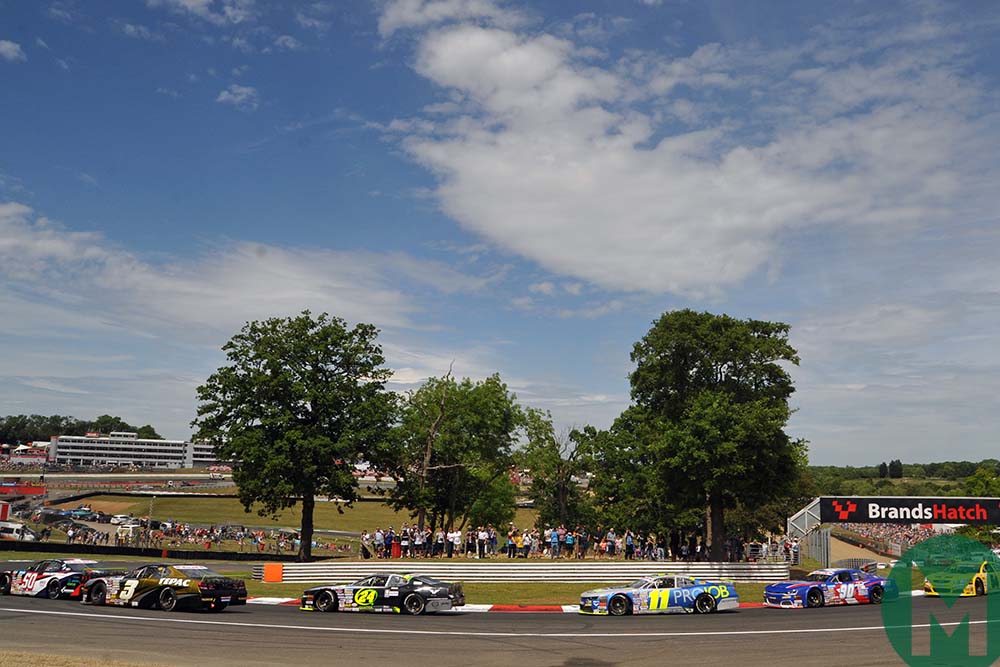 How to cram 232 cylinders into 1.2 miles: the Elite 1 field steams into Druids at the dawn of Sunday’s race

There’s an immediate clue that this is much more than a mere race meeting – not least a queue of Ford Mustangs extending some way beyond the entrance gate. The quickest way in is to find a space at the car park’s fringe and stroll past about 176 cylinders of Americana…

Racing is obviously a fundamental element of the American SpeedFest, of which this was the seventh, but the odds are that families would be able to have an engaging day out if they focused solely on the sideshows – live music, monster truck rides, classic car displays, wall of death and an American football demonstration featuring local team the Maidstone Pumas, to name but a selection.

On track, the NASCAR Whelen Euro Series takes star billing – partly because it features some well-known racing names (Jacques Villeneuve foremost among them, while fellow former grand prix star Alex Caffi runs a team), but mostly because the cars are an exuberant delight: lots of noise, not much grip, even less technology, terminal proximity. During qualifying for the Elite 1 division, for the (ever so slightly) quicker competitors, the top 23 (of 29) drivers were separated by less than a second. There is no recipe that will ever guarantee close racing, but this has more chance than most. 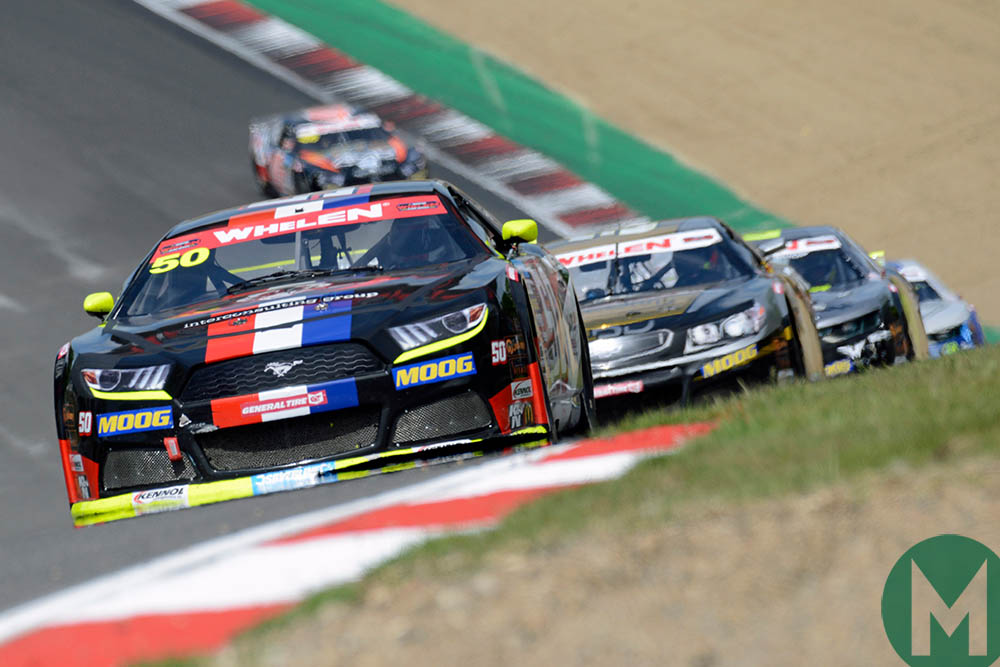 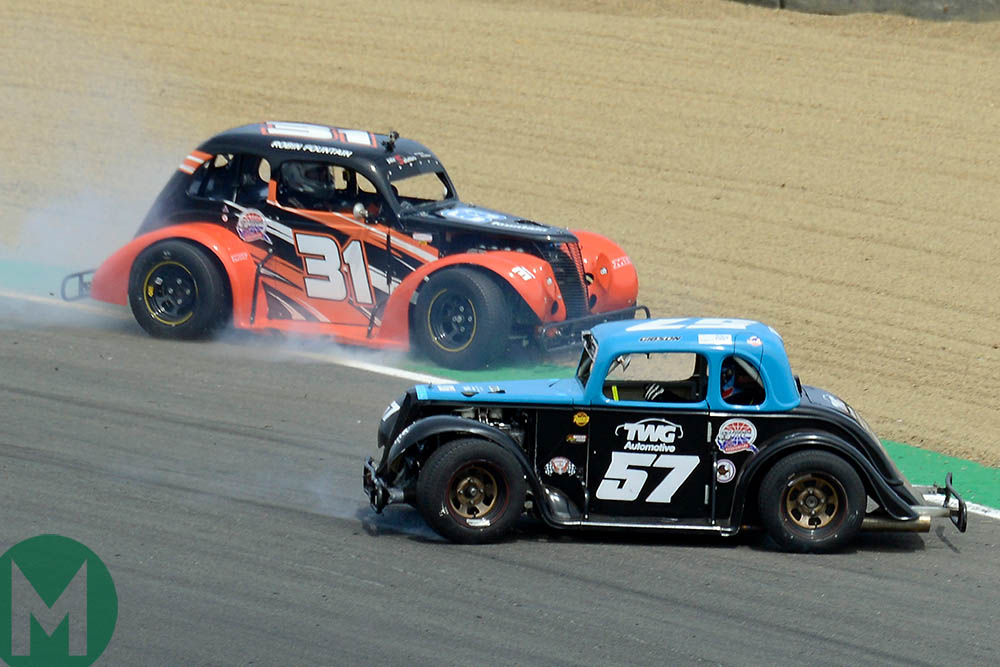 Left: The son of 1970s touring car star Toine, Loris Hezemans leads a gaggle of cars on the rise from Paddock to Druids.
Right: The last waltz: Will Gibson and Robin Fountain engage in directional confrontation during one of the weekend’s six Legends races.

The support cast wasn’t too shabby, either: Legends are always engaging in terms of body language and competitive zest, while the Bernie’s V8 concept is ever a paragon of diversity. The rules are fairly straightforward: mandatory V8, almost any wheel/tyre combo you like (bar slicks), free choice on brakes and transmission… About the only things not allowed are whingers and post-race protests. At Brands, the field of 35 included a clutch of South African visitors whose presence added such as a Chevy Nova and Plymouth Fury to the usual blend of TVR Tuscans, Camaros, Corvettes, MGB GTs and extravagantly modified Mk1 Ford Escorts.

When the meeting began on Friday, with NASCAR practice accommodated within a general test session, Brands had been equipped with its customary plastic poles, located just behind apex clipping points to reduce the likelihood of corner-cutting – but not that effective a deterrent for anybody with an 1150kg stock car.

By Sunday morning these had been removed, presumably because buying a couple of packets of fresh grass seed was likely to be cheaper than conjuring a full set of replacements every five laps.

This is unlike any other motor sport event in modern Britain; if you haven’t yet attended, make a date for 2020. 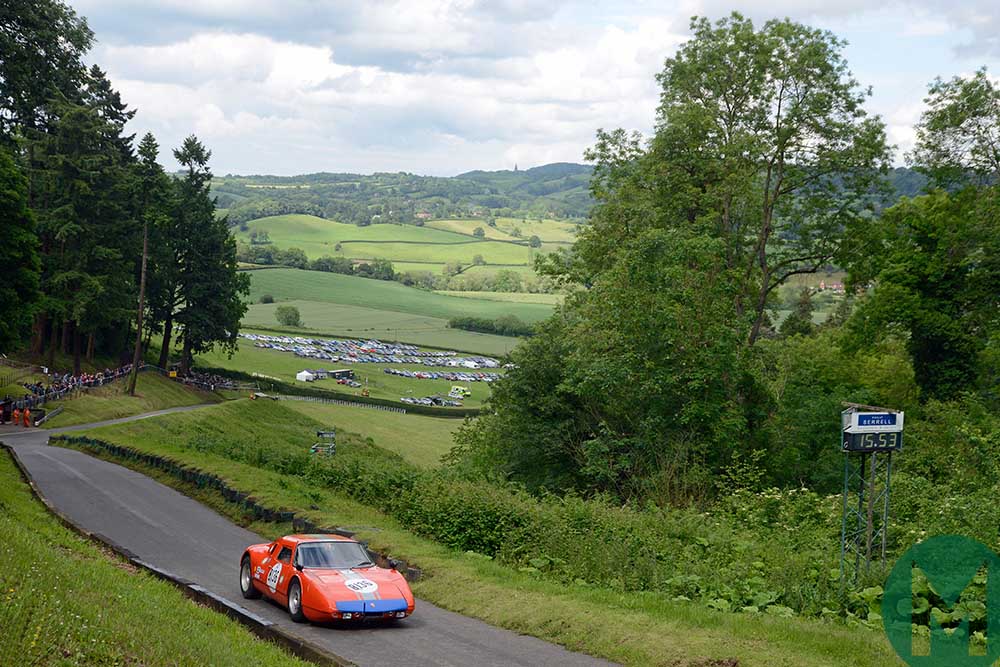 The northward drive through Oxfordshire had been a thing of splendour – clear skies, kestrels beautifully detailed by sunlight as they hovered low above the M40’s verge – but Worcestershire’s B-roads provided something of an anti-climactic sequel, persistent drizzle masking their customary charms.

But it mattered not. You can’t help but feel your spirits rise as you stroll past the quaint hut that marks the Shelsley Walsh paddock boundary – especially when one of the first cars you see is an original Alpine A110, bordered – among other things – by a brace of Hillman Imps and a Ford Anglia. There are no kestrels to be seen, but a raven’s call is audible above the clatter of cars being peeled from their trailers and multiple swallows dart around overhead, either chasing insects or else simply engaging in a spot of aerodynamic indulgence. Because they can.

Described by organiser the Midland Automobile Club as “one of the main events on the west of England’s social calendar”, the Classic Nostalgia weekend catered for machinery built before 1980 (although newer stuff competed in the Ralli 22 class for bygone stage warriors) and attracted everything from Austin 7s to a Triumph TR7 V8 via Ewan Cameron’s Formula 5000 McLaren M18, which sounded glorious tearing up a course that seemed barely wide enough to accommodate it.

In a slightly more pedestrian world, The Italian Job’s 50th anniversary was among the weekend’s themes and a commemorative parade featured three Minis (replicas, all) plus the very Bedford coach that appeared in the film – its passage accompanied by widespread hillside whistling of The Self Preservation Society.

Not quite as tuneful as a Chevrolet V8, but a nice touch nonetheless. 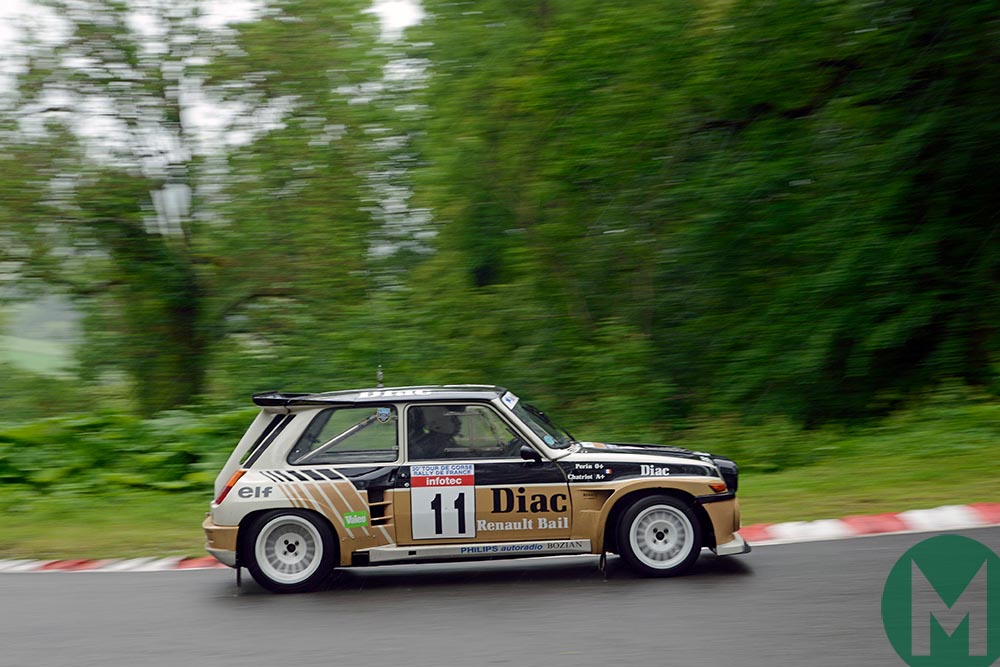 Not everything at Classic Nostalgia was built before 1980: Neil Brighton negotiates the Bottom Ess in his Renault 5 Maxi Turbo 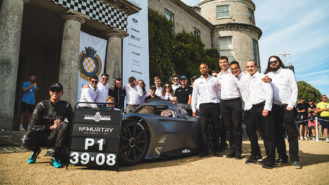