Nobody’s going to confuse Betim Berisha with Roger Penske. But this past weekend, as a privateer, he undertook the Penske-size task of entering three cars in three classes at the Pikes Peak International Hill Climb.

“It was a logistical nightmare,” Berisha admits. “I bit off more than I could chew. There was one stretch where we were working for 48 hours straight. I never want to run three cars again, I’ll tell you that.”

Of course, without great ambition there are no great accomplishments. A little bit of serendipity doesn’t hurt, either.

Berisha was bitten by the Pikes Peak bug as a young man sweeping the floor in a shop that had a poster on the wall of Jeff Zwart sliding up the mountain in a Porsche 911. Fast forward about a decade. Berisha is now running BBi Autosport, a Porsche tuning shop of his own in Southern California, when who should walk in but … Jeff Zwart.

“I’ve raced at Le Mans, Daytona and Sebring, but nothing I’ve done has ever compared to Pikes Peak.”

“I like what you’re doing with these crazy high-horsepower 911s,” Zwart said. “I have an idea for Pikes Peak I would like to run past you.”

The result was a Porsche 911 GT3 Cup car fitted with a Turbo motor. In 2013, Zwart finished third in the almost-anything-goes Time Attack 1 class in the BBi-modified Porsche. The next year, he was second. In 2015, Zwart drove the so-called Turbo Cup car to a class victory.

Berisha spent the next three years working on other projects. But he never lost the urge to return to Pikes Peak and put his stamp on the world’s most prestigious and, arguably, most challenging hill climb. 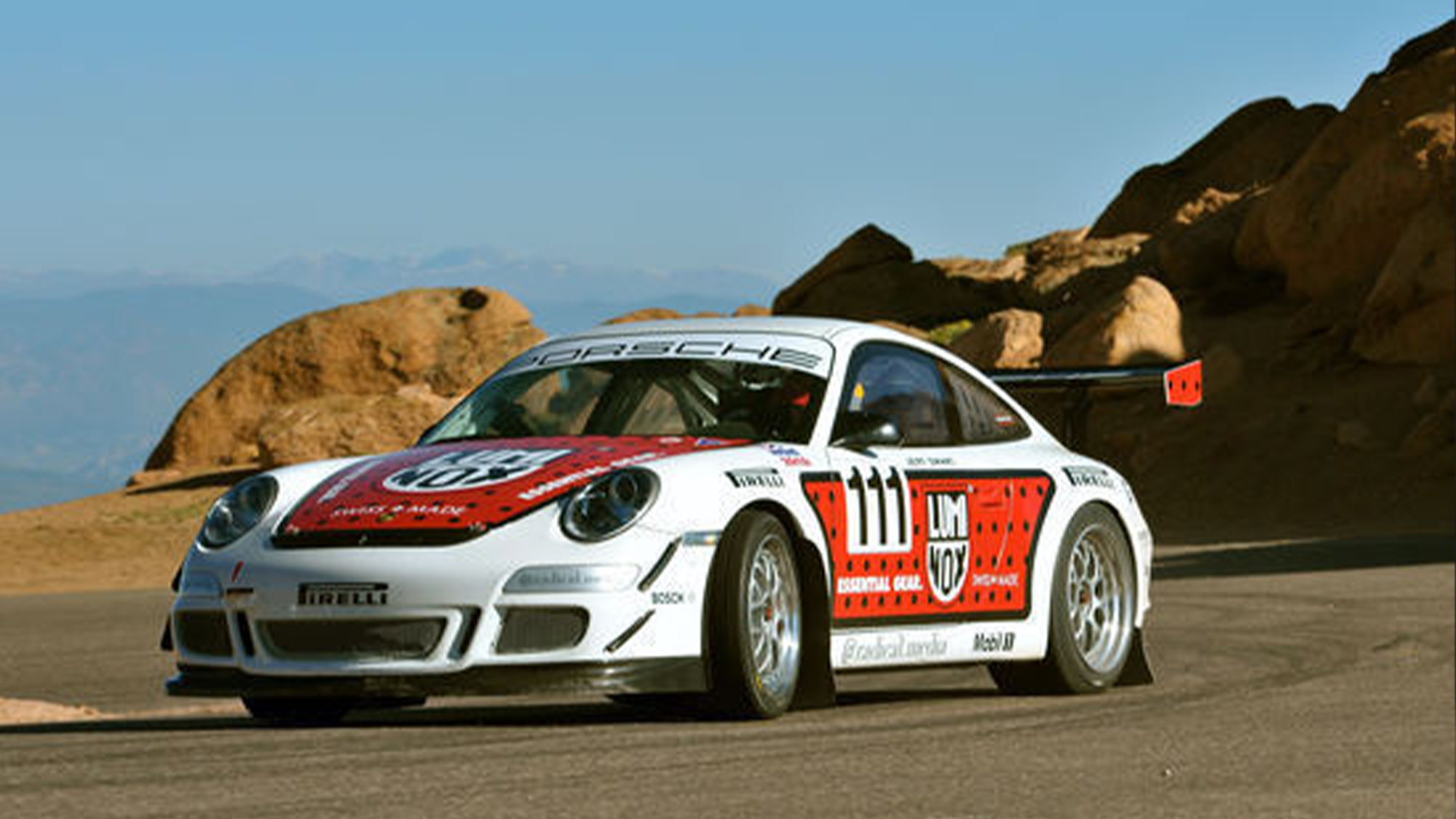 “There’s something about the vastness of the mountain and how much you have to do, not only as a driver but as a crew,” he explains. “I’ve raced at Le Mans, Daytona and Sebring, but nothing I’ve done has ever compared to Pikes Peak.”

Located in the Rocky Mountains of Colorado, Pikes Peak is named after an American explorer who never actually reached the 14,115-foot summit. By the turn of the 20th century, a carriage road had been carved out of the mountain. The inaugural Pikes Peak Hill Climb was staged in 1916. The winning time was a few ticks under 21 hours. Yes, hours. Hey, it was a long time ago.

Then, as now, competitors faced not merely a serpentine race course but also an oxygen-thin environment and wildly variable weather that can veer from sunshine at the start to snow at the finish, with sleet and God-only-knows-what in between. Once dirt and gravel, the road was fully paved in 2011. It now features 12.42 miles of asphalt that traverses 156 turns while ascending nearly one mile with an average uphill grade of 7.2%. 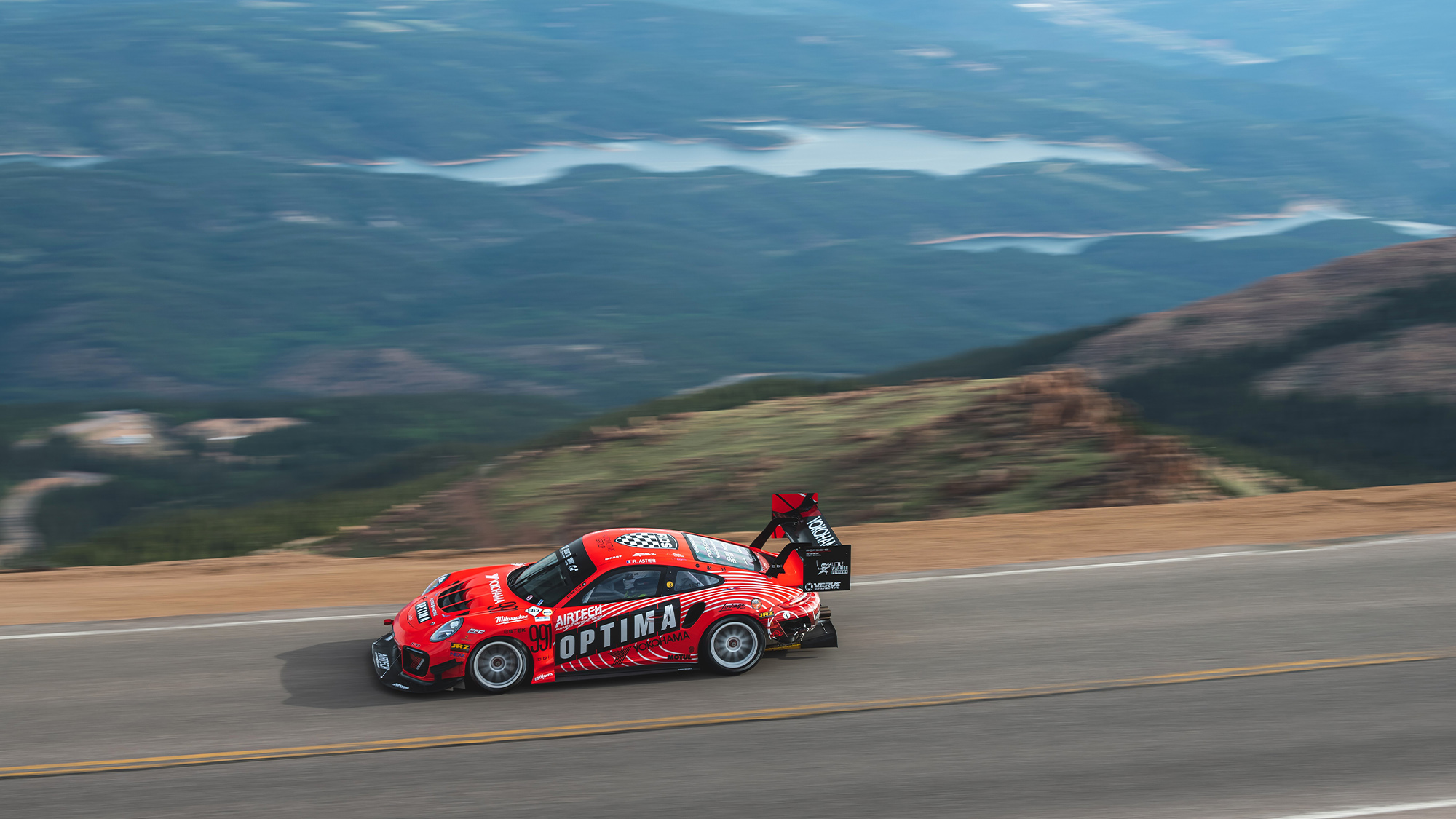 Raphael Astier heads up the mountain

For many years, Pikes Peak seemed to be the private playground of the Unser clan. With 10 overall wins, Bobby was the undisputed King of the Mountain, while other family members claimed 15 additional titles. In the 1980s, the race started to attract international rally stars, and records were set by Michèle Mouton, Walter Rörhl and Ari Vatanen.

As it happens, Dumas was the driver Berisha wanted when he plotted his return to Pikes Peak in 2019 with a wild car he dubbed Lucy – a 2015 Porsche 911 GT3 Cup car with an even-more-powerful Turbo motor. Berisha and Dumas were friends from their stints at Porsche Motorsport. But Dumas wasn’t available, so he recommended French rally ace Raphael Astier. Sure enough, Astier blitzed the Time Attack 1 field and finished second overall.

For 2021, Berisha stepped up to a three-car effort. Astier was back with Lucy, though the car had been reclassified in the Open category. In Time Attack 1, Berisha had Pikes Peak (and road race) veteran David Donohue – yet another second-gen driver – in a 2020 Porsche 911 GT2 RS Clubsport nicknamed Sunny. And drift/rallycross stud Tanner Foust was driving a Porsche 718 Cayman GT4 Clubsport racing in a spec class of its own.

Setting up cars for Pikes Peak is tricky because they need both mechanical grip for the many hairpins and serious downforce for the high-speed sweepers. “We approach it as a cross between a softly sprung canyon car and a stiff road race car,” Berisha says.

But logistics proved to be an even bigger challenge. Berisha’s three cars were competing in three different classes, which practised at different times on different parts of the mountain. So instead of his usual four-man crew, Berisha showed up with 19 people, and he ended up spending nearly an entire “month of madness” in Colorado. 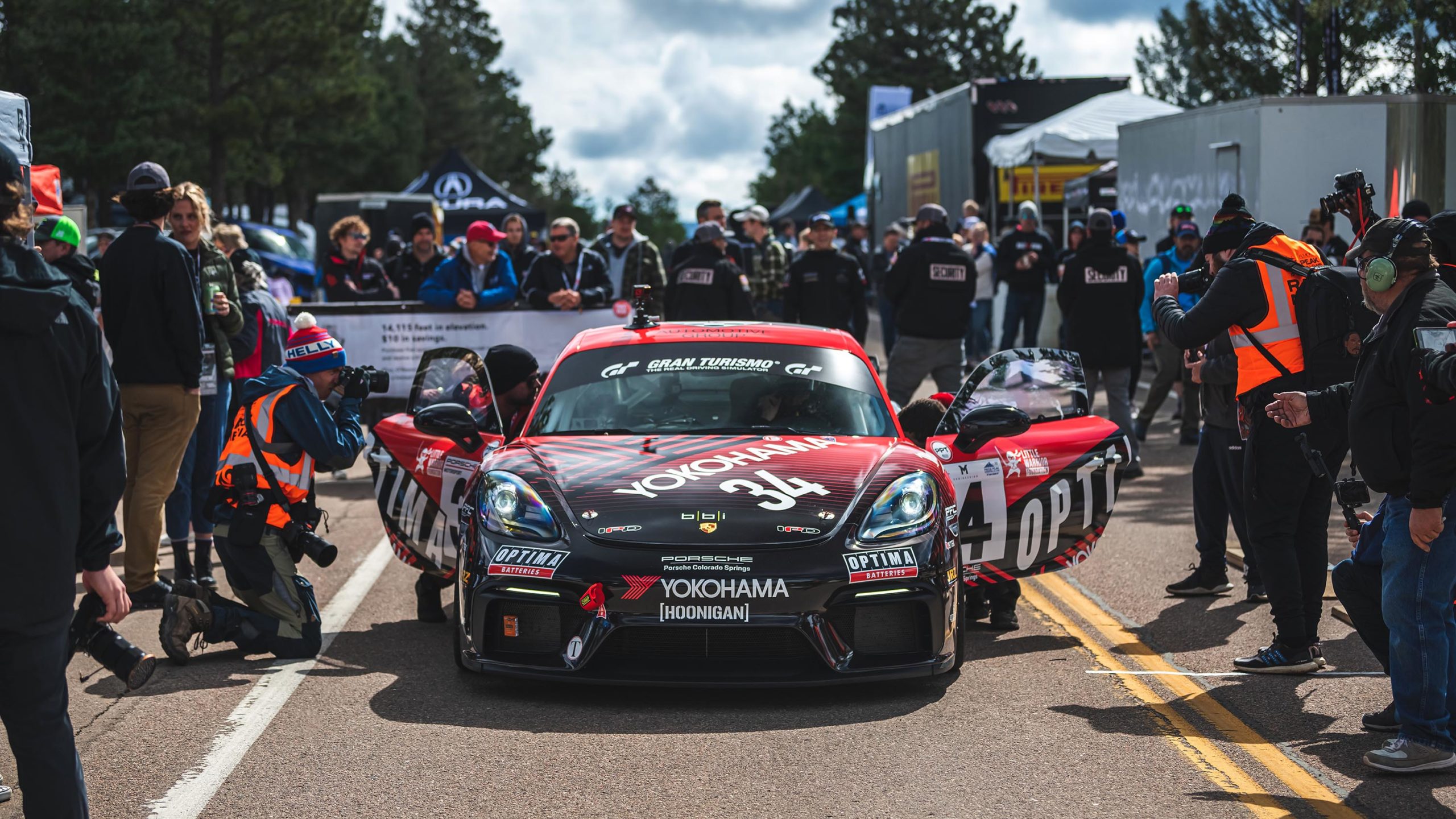 It didn’t help that the cars experienced unexpected problems, some small, some major, like an idler pulley that failed, necessitating an engine rebuild. Various maladies prevented Donohue from getting enough practice time. Come race day, when bad weather forced the organizers to shorten the course to roughly nine miles, he was limited to third in class behind Dumas in another GT2 RS Clubsport and Rhys Millen in a Bentley Continental GT3 that lost turbo boost during its run.

On the other hand, Astier drove like a total bad-ass, earning top Open Class honours. And Foust was in a different time zone from the other Porsche Pikes Peak Trophy by Yokohama entrants. “He didn’t show much mercy,” Berisha says. 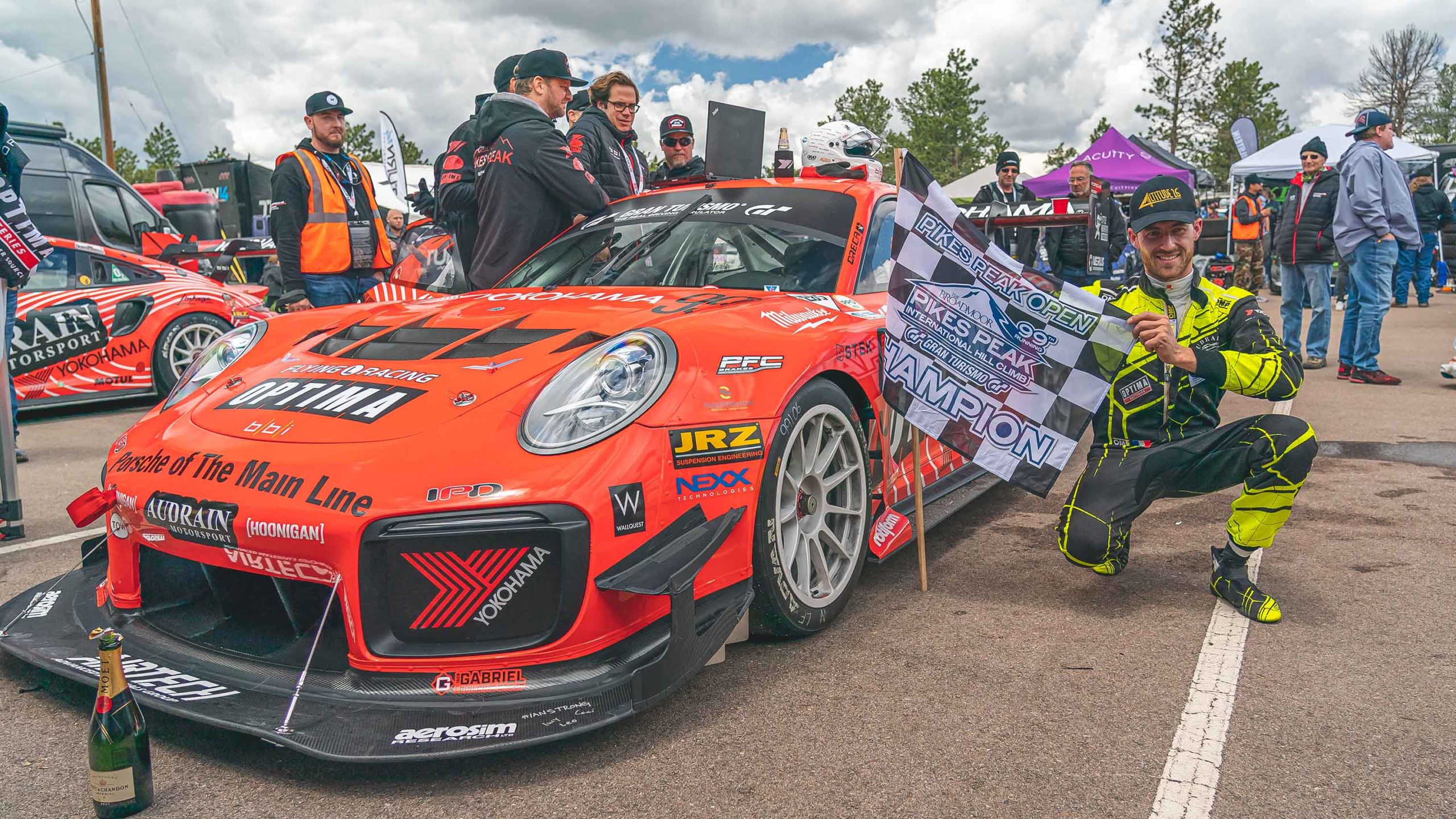 Three cars, three classes, three podiums – a feat never before achieved by a private entrant. But the results merely whetted Berisha’s appetite for more. Eventually, he dreams of using a production-based Porsche to take overall honors – a tall order considering that a purpose-built race car is usually fastest up the mountain. (This year’s race went to Norwich native Robin Shute in a highly modified semi-open-wheel Wolf GB08 single-seater.)