“So, I’m actually wearing a travel sickness band to see if that helps.”

The Motor Sport editorial team is not known for its karting abilities at the best of times, but this was a new low: the reason for art editor Damon Cogman’s comment yesterday was that he felt so sick after five laps in the 2014 Henry Surtees Foundation Team Karting Challenge that he had to get out and throw up.

Features editor Simon Arron had arrived 10 minutes earlier and was complaining of a sore foot while I had a bad back. Incidentally, we worked out that our four-man karting Super Team weighed a total of 350kg. Four-man? Yes, we had roped in 2013 Radical SR3 Challenge Champion and BRDC Rising Star Bradley Smith. Which, when you think about how much young racing drivers weigh, makes the 350kg figure even more embarrassing.

Not to worry – we had a team talk and decided that anything in the top 20 was a good effort. There might have only been 32 teams, but many of those consisted of proper karters and even the likes of 2012 McLaren BRDC Autosport Award winner Jake Dennis. Some of the professional karters were so small I could have sworn they were only five years old.

Despite a black flag (which turned out to be for another kart – thanks number 133) and a couple of slow stops (Arron’s agility getting in and out of a kart needs to be seen to be believed) we finished a very respectable eighth. I’d like to say it was a great team effort and the result of much hard work, dedication and set-up choices, but it wasn’t – it was mostly down to Bradley and us having the foresight to put him in kart for 45 of the 120 minutes.

Aside from the karters and young drivers Derek Bell was there to start the race. “I was here last year,” he said before the race started, “and someone asked whether I’d like to compete in it. My first thought was that I’d love to, but then I saw how seriously some people were taking it…” Thankfully the driving standards were much better this year.

Damon Hill was also in attendance to wave the chequered flag and during the lunch break he joined the parade in the ex-Clark 1965 Tasman Lotus 32B to commemorate the 50th anniversary of Clark’s second title. Bell was behind the wheel as well, reunited with the Surtees TS7 that he finished sixth with in the 1970 United States Grand Prix, as was 2012 Formula Renault BARC Champion Scott Malvern – in the Surtees TS10 F2 – and Oliver Rowland in the ex-Alan Jones TS19.

We all agreed it was the best Karting Challenge yet thanks to improved driving standards and fewer ‘win or crash’ mentalities on track. The overriding memory, though, is that of John Surtees’ continuing enthusiasm for the Henry Surtees Foundation and racing in general. Incidentally, he wasn’t doing the parade this year after a telling off in 2014 for going flat out… The HSF has done astounding work helping people with brain and physical injuries as well as providing education and training via motor sport-related programmes.

Just one of the many things the foundation has funded is blood transfusion equipment for two helicopters in Kent, Surrey and Sussex’s Air Ambulance fleet. This year the Karting Challenge raised £59,500, including £18,580 at a post-race auction hosted by Malcolm Barber of Bonhams.

Hats off to Il Grande John and his team at HSF. 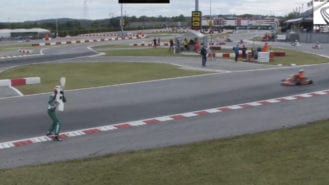