‘Iconic’ is a much overused word these days, and it’s a particular bugbear for one of my team here at Motor Sport. But sometimes it’s a word that’s hard to avoid. Sometimes it’s the first thing that springs to mind when presented with a certain image. And if anything deserves this hallowed status it has to be the Gulf Porsche 917 on the cover of the August issue, perhaps the greatest racing car ever built – depending on your point of view.

Like everything of the ‘greatest ever’ nature, it is purely subjective, of course. It’ll depend on your age, your bias towards sports cars or Formula 1, and so on. And the same came be said for our assertion that 1970, a year of thrills and turmoil in equal measure, is ‘Year Zero for the Modern Age’.

We thought long and hard about such a tag when we decided to theme an issue around a single season, 40 long years ago. It seemed to fit. Rampant commercialism and concerns about safety really took hold in the final years of the 1960s, but certainly on the point of safety this was the year when people finally started to listen to Jackie Stewart. After 1970, the sport had to change.

As Nigel Roebuck writes in his introduction to our special section, this was the year when F1 drivers managed to change the venue of the German Grand Prix from the Nürburgring to Hockenheim at less than six weeks’ notice – all in the name of safety. The deaths of Bruce McLaren, Piers Courage and, later in the season, Jochen Rindt focused the drivers like never before on their attitudes to the sport. Rindt’s own mixed feelings on racing are captured in this issue with an extract from David Tremayne’s new biography. The Austrian would become F1’s only posthumous World Champion. But had he lived, the dangers and loss of close friends appear to suggest he would have retired anyway.

It went beyond safety. 1970 was the start of a new decade where the whole world changed dramatically – in some respects for the better and in others for the worse. The 1960s are often depicted, rightly or wrongly, as the end of the age of innocence. In a decade that featured the assassination of a US president and the futile war in Vietnam that’s perhaps too trite. Nevertheless, it’s a fact that nostalgia for the ’60s remains stronger than for any other decade. Nostalgia for the ’70s is popular, but it’s also remembered as a tougher, more cynical decade. The colour and extravagances of the world today can be traced back 40 years, to a time when the old values, fashions and expectations were being overtaken by new attitudes – with a harder edge. As usual, motor racing ran in parallel to the world at large. Life would never be the same again.

We chose the Gulf 917 as the image most linked to the year even though the monster was actually born a year earlier. It didn’t even win Le Mans in the blue and orange colours. But it’s so familiar, so of the time and – aided by Steve McQueen – so of that specific year.

Perhaps you might disagree with our ‘Year Zero’ premise. If there were such a thing, maybe you’d care to argue it was 1968, or ’69 or ’71… We’ll be awaiting your comments. But in the meantime, whatever your feelings, I hope you enjoy a group of features that will surely entertain you. Just check out this line-up: Rindt, Stewart, Amon, Rodríguez, March, BRM, Porsche 917s – and of course that man McQueen. With that lot, you can’t go wrong! 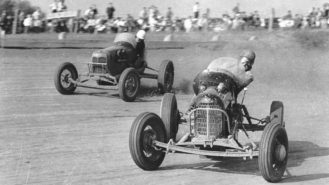