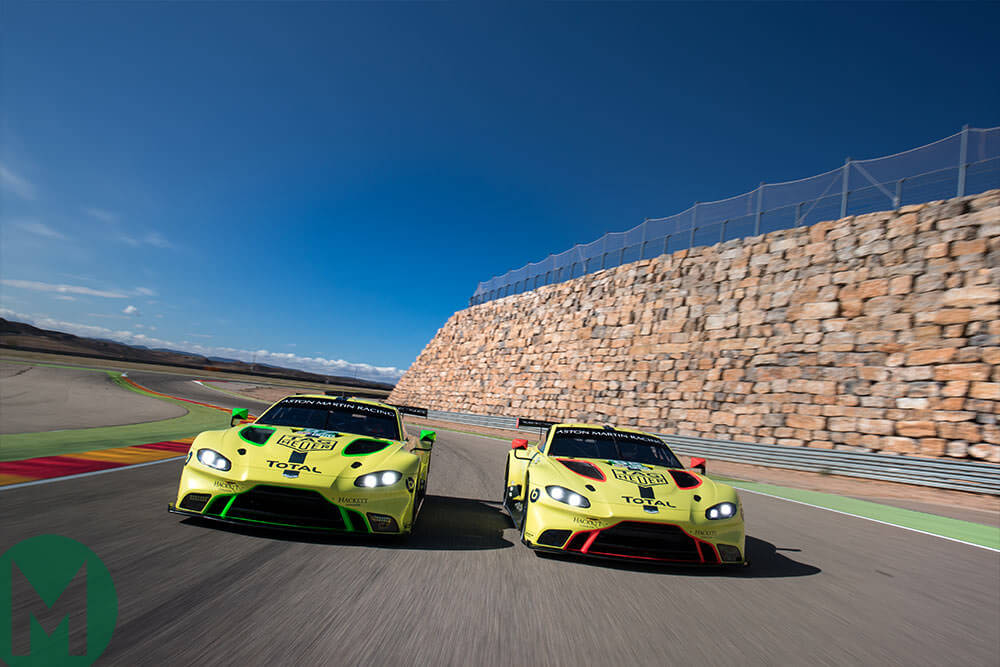 There appears to be no question that the new Aston Martin Vantage GTE is going to hit the ground running.

More than 20,000km of testing has already been clocked up around the world, making full use of its new driver line-up putting in the shift work. The signs are that this is as chiselled and optimised as it could be with still a few weeks to run until the official preseason test, the Prologue. And there’s still six weeks until things get competitive in Spa’s opener.

There are tricks to be found in the new car, as Darren Turner points to the makeshift aperture for its new onboard rearward-facing radar as he wanders around it in Prodrive’s expansive Banbury facility. Races can often be won or lost in traffic, and this will only make life easier for Turner and his team-mates Nicki Thiim, Marco Sørensen, Jonny Adam, Alex Lynn and Maxime Martin.

The pedal box moves now, too, rather than the need for the cumbersome seat inserts for Turner to drive the same car as the bigger Danes. Now, courtesy of a makeshift mechanism comprising little more than a bicycle brake lever, the pedals do the hard work and perfect comfort. Fears of those pedals inadvertently disappearing from reach have been quelled, not helped by alarming stories from others…

The hydraulics have gone from the steering and it’s now electronic, much else is too. It’s a digital car to the analogue war horse that was the departing 12-year-old Vantage.

Everything has been optimised, it’s more compact – the engine bay is tightly packed, the powerplant bolted in 100mm lower than the old car to optimise the centre of gravity. The cooling of Mercedes’ turbo-charged four-litre V8 has been the biggest challenge, one that’s been overcome.

For Paul Howarth, team principal of Aston Martin, the key to having such a well-prepared brand-new car has been time. “And good people,” he adds. “And a good relationship with AMR and Aston; there are a lot up at Gaydon who were involved in that package, foresight and the ideas.

“Put those people together, give them time and you’ll get a good outcome. When you don’t get time you don’t, so we approach motor sport with a lot more time to consider what is required.”

Time is something the team has a bit more of with the introduction of the World Endurance Championship’s ‘superseason’. “That’s been more a blessing than not,” admits Howarth. “You just want to keep replaying, replaying, replaying to get the best out of the car.

Such has been the success of the plucky band of Brits at Banbury – world titles in GTE Pro and Am, and finally, a Le Mans win last year after Jonny Adam’s last-lap pass – that Aston and Prodrive have been able to reshape the way it works with its suppliers. Alcon has produced bespoke brakes – bigger, stronger and more responsive than the old Brembos. And Alcon’s made that pedal box. Xtrac has repackaged the gearbox to be a compact light and efficient block, Ohlins has optimised the suspension. Aston Martin’s designers on the road car side have been working in tandem with those at Prodrive on the race car side.

Arguably the most obvious supplier and partner change is beneath the car. Dunlop, so proud to have played a large part in last year’s Le Mans success, has been shelved for Michelin.

“We needed something,” Turner says, “to give us something different after so long against the competition. Dunlop gave us that and it worked at Le Mans last year. Now we need to be sure we’re matching them, which is everyone being on Michelin.”

That’s the party line being quoted by Turner, it transpires, as so many others repeat it.

There’s no risk to the switch, though, according to Howarth. “We wouldn’t have done it if there was. It’s an evolution in performance. You need the best of everything, whether that’s the best brakes, dampers; everything. The window to win is very narrow, so you’re looking for every percentage of performance we can get from a controlled formula. You have to leave no stone unturned, that goes right across the team.”

Back to back tyre testing wasn’t undertaken, the decision was clear and calculatedly made.

The testing work since, those tens of thousands of kilometres, has been steady and successful. Speaking to the drivers on the car’s launch in late 2017 there was a unanimous feeling of quiet confidence. Three months down the line and the positivity has only grown.

Howarth: “We’ve done a lot of work to get here. It’s been a long process, working with Aston Martin and a large team split into chassis group, aero group and engine group. It’s been positive from the first wheel turn and delivered against its objectives.

“When you design a car you set your parameters you want to achieve, of course like any car you want robust reliability over a period of time. But we’ve made changes, we’ve learnt and continue to learn. The championship will always throw up race where you’ll learn more, but it’s been a positive and interesting start.”

When the car finally hits the track with its rivals Ferrari, Porsche and series newcomers BMW, Howarth will be casting only mild interest over its competitors: focus is solely on what Aston Martin is managing.

“I’ll think ‘that’s interesting’ but that’s it. It’s interesting to watch the teams and how they work, the driver performance and them in the middle of the night. You see where they are on long runs, how much fuel they’re running and can build a bit of data but the real measure will be when we’re at Spa in qualifying and the first two hours of the race.

“The timing screens aren’t irrelevant at Paul Ricard. It’s interesting to watch, you’ll think ‘they’re on a quali sim.’ But below that word interesting is a load of questions: what tyre? Who’s driving? How much fuel?”

Aston Martin appears to have been keen to keep expectations in check and out of the press. There’s been little fanfare, little bluster. Yet Howarth’s wry smile hints at a confidence. “You have an ambition to win. GT racing is at the highest level it’s ever been and we want to be there to win, whether that’s in the final laps with a chance to win or just being in the mix. That’s how you approach any form of motor sport.

“We’re ahead of the curve.”

He’s confident of the Balance of Performance working for all involved, fans and teams. “If we’re bumper to bumper, I’m happy because we’re fighting to the last 100 metres. I’m fine with that. Some people aren’t, especially drivers. Win by 30 seconds and it’s not very interesting. Win by two metres and it is,” he added, speaking for everyone.