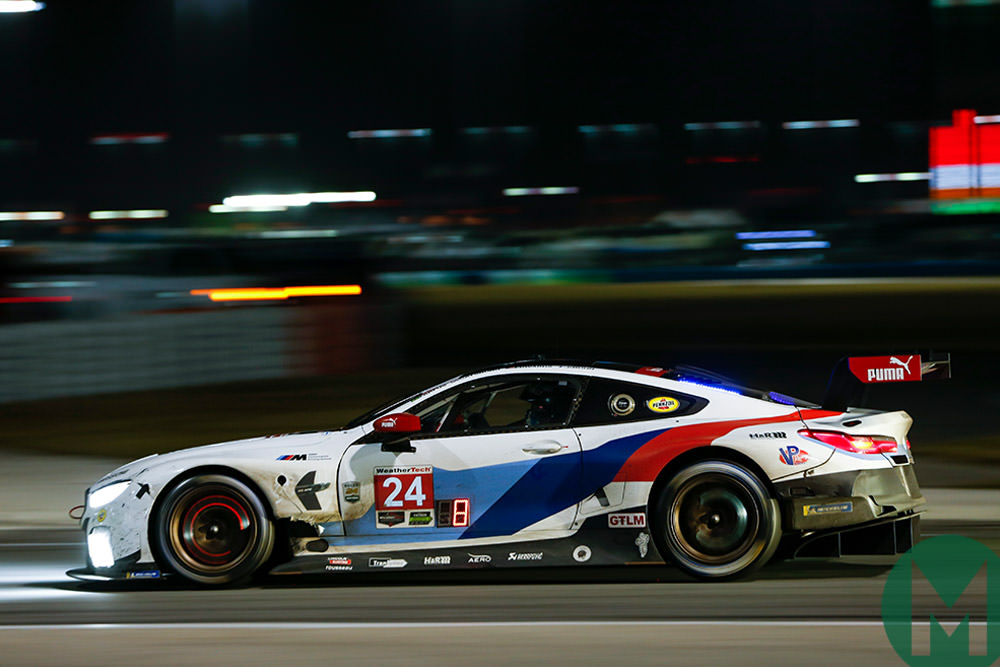 The BMW M8 GTE will run a higher amount of turbo boost, increasing top-end power, as IMSA released its latest Balance of Performance changes before the Sebring test on February 20-23. The move comes after the German manufacturer complained about being stifled by BoP regulations at the Daytona 24 Hours.

In a statement released during the Daytona season-opener, BMW’s spokesperson said: “Considering the given Balance of Performance, it was obvious, even before the start of the race, that the two BMW M8 GTE cars would be out of contention for top positions.

“BMW and IMSA have been working together for years in a very positive and constructive manner. The BoP system is an integral part of global sports car racing including the IMSA WeatherTech SportsCar Championship. BMW and IMSA will continue productive, open talks and have agreed to find an appropriate BoP assessment for the upcoming events starting with Sebring, allowing the BMW M8 GTE to show its performance for the benefit of the series, BMW and the fans.”

BMW Motorsport director Jens Marquardt added: “The car couldn’t show its true potential yet. That’s why BMW and IMSA will continue their productive and open talks and have agreed to find an appropriate BoP assessment for the upcoming events starting with Sebring”

IMSA has now issued revised BoP regulations for the BMW M8. Its four-litre, twin-turbo engine gets an increase in boost above 5000 rpm – and a decrease in boost at low-revs. Its fuel tank capacity has also been increased as IMSA aims to bring the BMW into a level playing field.

Prior to the Daytona 24 Hours, works driver Alexander Sims explained that the M8 wouldn’t provide a significantly higher step in performance over its predecessor, the M6.

“If BMW develops a car that can go five seconds a lap quicker than the others, the organiser will add ballast and decrease the power, and make it race in the same manner that the M6 did with its competitors,” said Sims to Motor Sport. “Its actual outright performance has more potential than the M6; it has been developed with more time and effort, especially considering the electronic and mechanical systems on board.

“With the M6, the weight distribution was one weakness. We just struggled at low-speed corners with the rear of the car because weight distribution was a little bit too forward and we didn’t have enough weight on the rear wheels. In medium and high-speed corners, the downforce would overcome that and take over and become a strength of the car. The low-speed rear end was the problem.

“Obviously, a factor of it being long and the engine being at the front, you’d probably always face that problem to an extent. But having driven the M8, while its still a big car, those problems have been improved significantly. BMW seems to have done a very good job on that.”

The BMW was also hindered by limited running in free practice at Daytona. Above all, Sims cited the BoP regulations as the biggest obstacle to the BMW’s success, before the BMW M8 pair finished seventh and ninth in class at the Daytona 24 Hours – 10 laps down on the GTLM class-winning Ford GTs.

“It’s really difficult to rate our chances,” explained Sims. “But with the M8, and the BoP regulations that will slow it down, we’re probably not quite in the position to win races on pure performance – but things can change.”

Ford will lose two-litres in fuel tank capacity, while Porsche will receive two-litres, at the Sebring test.