Fast forward to autumn 2020, and Revolution will be hauling around 20 A-Ones to the Algarve to hold a race on the undercard of the Portuguese Grand Prix for what will be just its seventh official event. That’s some turnaround. Especially in an industry that has largely been halted for months due to a global pandemic. But oddly, the outbreak of Covid-19 created some opportunities for those ready to gamble. And Revolution was raring to roll the dice.

Firstly, Covid-19 essentially created the Portuguese Grand Prix in the first place. Portimao was nowhere near the grand prix calendar before Formula 1 faced a wave of fly-away cancellations as both the Far East and America understandably put racing on hold to fight back the virus. It threw the entire international racing calendar into flux, forcing Formula 1 Management to find new solutions and new venues in order to stage a championship at all.

But that had wider implications, too. Two of F1’s traditional support artists – Formula 3 and the Porsche Supercup – couldn’t make Portugal work for their schedules, so the grand prix had some support slots going, just as Revolution was attempting to rebuild its own schedule. And that led to a big chance to spin the wheel.

“It’s been an extraordinary year, for many reasons,” says Sports Prototype Cup and Revolution UK Trophy promoter, James Bailey. “We started off with a calendar with five UK rounds and two overseas rounds, one of which was a World Endurance Championship support at Spa-Francorchamps [shared with the Britcar grid] and our season finale at Paul Ricard. Then we lost most of it due to the COVID outbreak as most of our races were in the first half of the year, so we had to phone everybody from TOCA to the 750 Motor Club and historic organisers to see what, if any, dates we could round up run something in the second half of the year.

“Then we heard that Formula 3 and the Porsche Supercup weren’t going to Portimao, and we have a good relationship with Paulo Pinheiro the CEO there as we did a lot of our shakedown work and pre-season testing there, so we put a call into F1 Management and pitched for a spot on the undercard and they loved it, so we got the green light. Suddenly we’d gone from being offered 20 minutes at Pembrey and a race slot at Anglesey to getting a chance to race alongside Formula 1. As much as we love Pembrey and Anglesey, it was a quick call to make…” 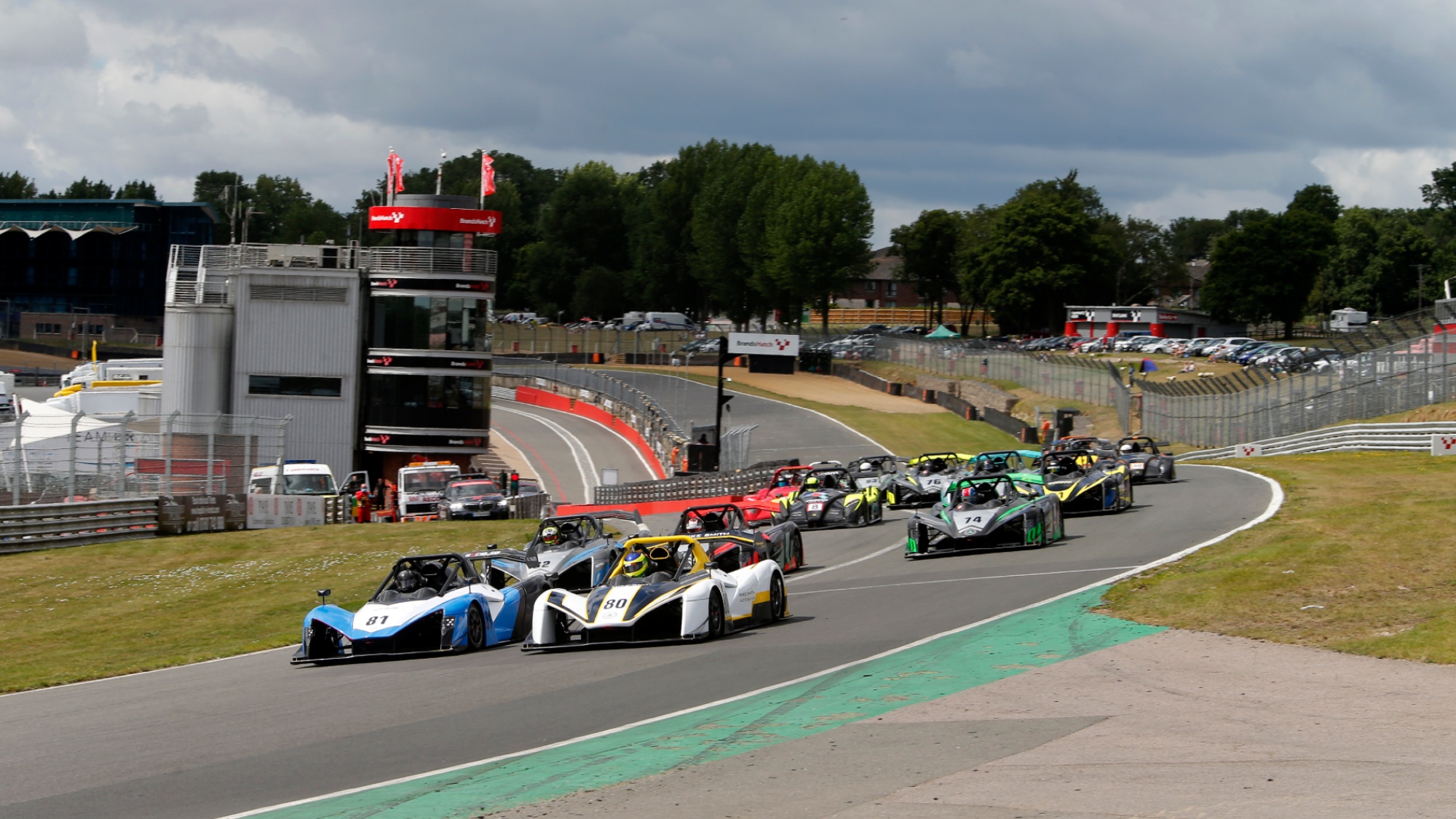 And just like that, Revolution Race Cars has been catapulted onto the international stage to build on what has already been some solid progress in the UK marketplace. Founded by former Radical Sportscars boss and ex-Ligier consultant Phil Abbott, Revolution’s grids have risen steadily since that small-batch opening event at Silverstone last year. Eleven cars contested the opening Revolution UK Trophy race at Brands Hatch in August, and 10 made the trip to Spa for the WEC event. Now, with an F1 support slot on the schedule, interest has increased even further.

“Since we added the F1 support race, our customer enquiries have gone up four-fold,” says Abbott. “Everybody who has ever bought a sports-racing car in America seems to have contacted us in the last few weeks, which is great. But the interest has gone global because we’ve put ourselves on the right stage.”

So, what, and who, is Revolution?

You have to stand out in this market, and having a car where it’s been shaped by science rather than designed – doesn’t help

First off, it’s a prototype sports racer designed to fill the gap between traditional spaceframe chassied production cars such as Radicals, Gunns or MCRs, and costly full-blooded LMP machinery. The A-One features a full carbon tub, carbon floor, weighs just 795kg and boasts a 380bhp 3.7-litre Ford V8 and a six-speed paddleshift gearbox at its heart. The result is 440bhp per tonne, putting it only marginally down on LMP3 figures.

But, where an LMP3 would cost you around 240,000 euro for a chassis and engine package, a Revolution comes in at £139,000. While it’s perhaps unfair to compare two different prototype breeds and their usage, the contrast serves to show that you get a lot of performance for the money, whichever way you spin it.

“Instead of trying to make a more advanced Radical or something similar, we’ve gone for an LMP car at half the price approach,” explains Abbott. “Whether you’re Radical or Gunn or any of the other brands building spaceframe cars, it’s a huge step to move up to something like an LMP chassis, and there are always customers that want to make that step into something faster, safer, more progressive.

“I remember 10 years ago when I was at Radical somebody said to me ‘Why would anybody try to build a new sports racer, because they surely can’t beat that’. And it’s stuck with me ever since because statements like that make me think ‘Well, why not?’ and that sets a thought in motion. Because one day Radical SR3s and the like will stop selling, and you have huge staffing and business costs so you have to be prepared for the next shift in the market. We basically invented the production racing car when we founded Radical, and we flooded grids around the world to create a market for those types of cars, but what’s the next step? Somebody always has to pop their head over the parapet and find a new way of doing things.” 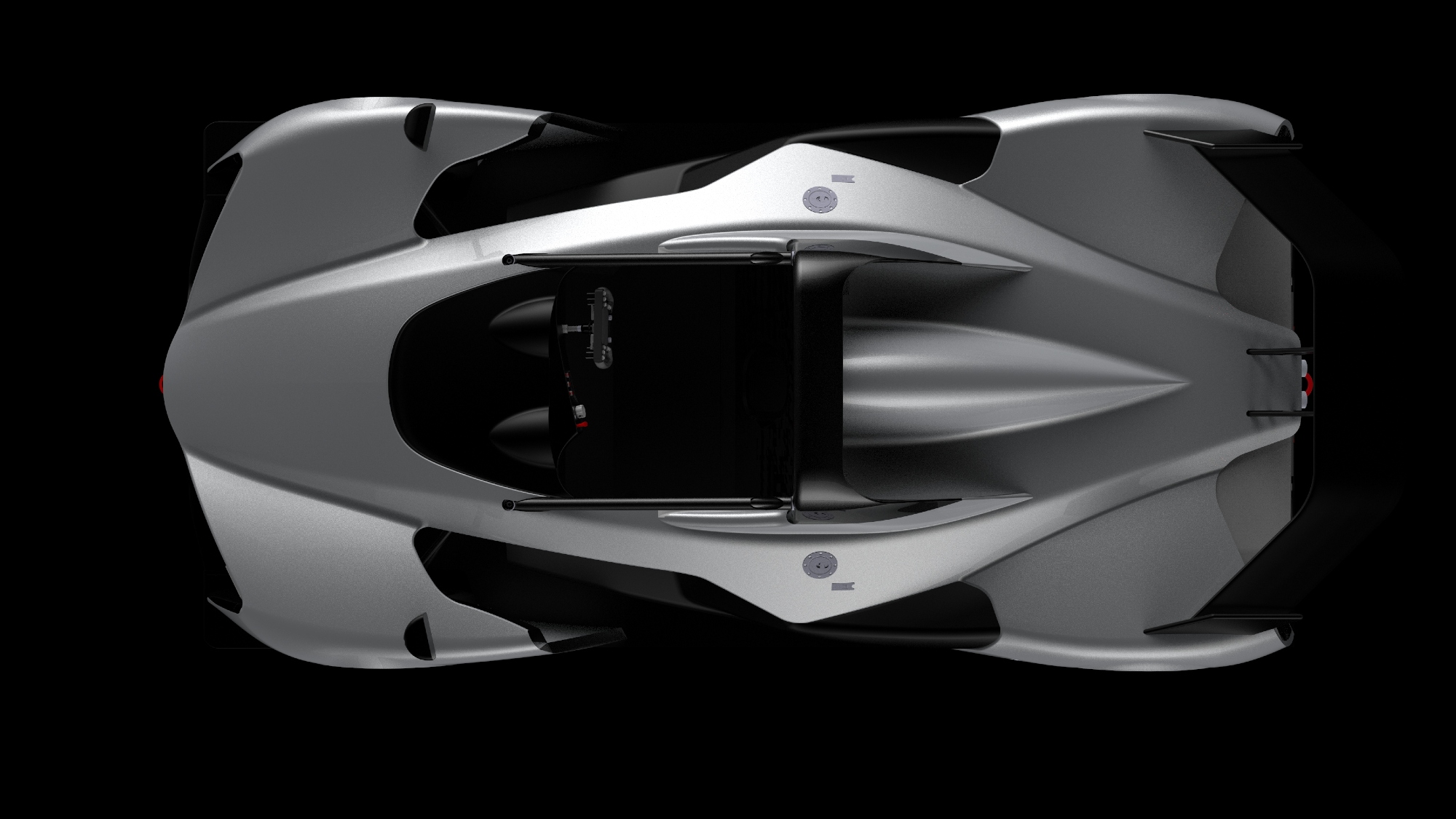 Revolution is undoubtedly founded on Abbott’s vast knowledge gained from his two decades at Radical and subsequent work with Onroak Automotive – Ligier’s parent company. It also has some big-hitters on its board, with seasoned historics racer and businessman Michel Frey and Marcello Marateotto both being counted as Revolution investors.

The eagle-eyed amongst us will make the connection that the A-One does share a resemblance to Ligier’s JSP4 track day toy, but obviously shorn of its roof. Abbott explains that while the two are very different machines, they share a common designer.

“The experience of working with Ligier was fantastic, with superb facilities and after doing things one set way for 20 years it was so refreshing to be introduced to new ways of working, but we went another new route with the Revolution,” says Abbott. “The A-One and JSP4 are very different cars. They both have a carbon tub and a carbon floor, and some of the skin shapes and concepts may be similar, but they’re both built and engineered in very different ways.

“For example, all of our carbon componentry is about 80 per cent more energy efficient than a standard pre-preg carbon construction [where carbon sheets are pre-soaked in hardener resin and then stored at very low temperatures to avoid them setting before being worked with]. We use a different process [called carbon infusion, developed by DDComposites in Germany] and by doing so we can create a very strong carbon chassis very efficiently. For example, our tubs visit an oven once during their build cycle to be treated at 60degrees, whereas with pre-preg carbon you’d be doing that five or six times at 160degrees, and then have the energy for the storage freezers running 24/7. 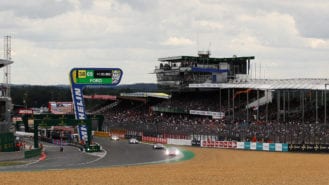 “The Revolution is also perhaps one of the first sports racers to be styled before it was actually engineered. You have to stand out in this market, and having a car that I’d call ‘aero ugly’ – where it’s been shaped by science rather than designed – doesn’t help. There’s no getting away from the fact that pretty cars sell. Cars like Ferraris, Lamborghinis, Porsches all sell because they look great and then they go fast. We took the same approach and worked with Simon Cox [former chief designer for Infiniti], and a group from Coventry University for the A-One. Simon previously designed the Corvette C7 and Cadillac Sixteen. We gave him our core needs and got some pretty outrageous initial drawings back, which were fantastic. Then we went to the University and made them into clays and made them fit into a framework, and only once we had the base design did we then begin to tune it aerodynamically with [British CFD specialist] TotalSim. Then when that was done we had to engineer it, so it’s a rare thing for a race car to be styled first and made to work properly later.”

Then there’s Revolution’s construction model, which is rather unique. Instead of selling either a whole car or one in pure kit form, the A-One comes as a partially assembled kit designed to be fully assembled by the team running it. It allows Revolution to easily scale up production if needed, which could be a real advantage ahead of that F1 support race.

“I spent years trying to make the perfect turn-key race car, and teams always disassemble it the minute they get it anyway to work it out, so we figured it was better to be supplied that way in the first place,” adds Abbott. “It also means we don’t have to have 150 people on an assembly line.

“We supply a pre-packaged complete assembly of parts. Every last nut and bolt is pre-packaged in its own sectors, so in one drawer you have your full front suspension parts, and then your entire rears suspension is in another drawer, etc. Having that sort of pre-preparation greatly speeds up the construction process. 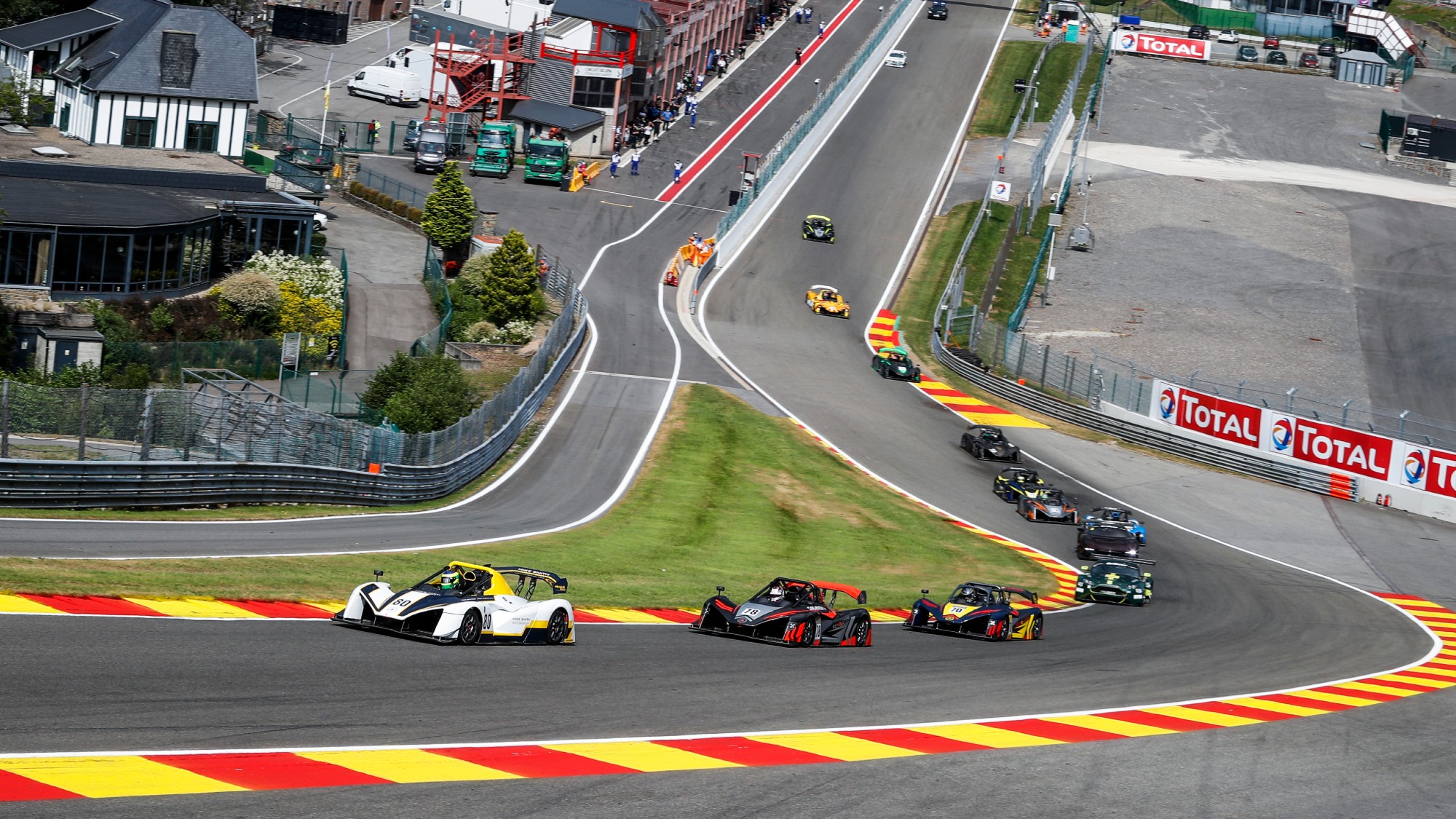 Revolution has already supported an FIA world championship, featuring ahead of the WEC Spa round last month

“Each component is also laser-etched with its part number and issue number so we could even look at a part on an iPhone in five years and instantly know where it’s come from and when. With all of the little bits of technology, packaging and information we can tap into we’ve been able to get ahead of the curve as there’s nobody doing what we’re doing at the moment.”

And having that sort of business model allows Revolution to really push the boat out to meet demand. Abbott estimates a full race-ready build from scratch to take between 40-50 hours and even less if you use Revolution’s in-house team.

So, could we be seeing more of the brand on the grand prix stage?

“The aim for Portugal is 20 cars,” adds Bailey. “There are currently 16 built and ready to go, but the level of interest from having an F1 race means we could look to increase the production and build schedule and go for more than 20.

“We absolutely want to keep this type of momentum going. With many national brands the growth comes from having championships and distributors across different countries. Rather than just having distributors in each country Revolution could also have build centres, which is a way of growing the global market.

“The goal is to still have a championship with its roots in the UK, and we run with Britcar a lot and share a tyre supplier and we can share hospitality, TV coverage and all sorts, which is sensible. But we do want international races, too. Whether that’s F1 in the future, we have to take it a step at a time. But the F1 slot isn’t our first world championship race, and it also won’t be our last.”