Admired by James Dean, campaigned by playboy Porfirio Rubirosa, racers Phil Hill and Richie Ginther and more, this Ferrari is the cream of the crop 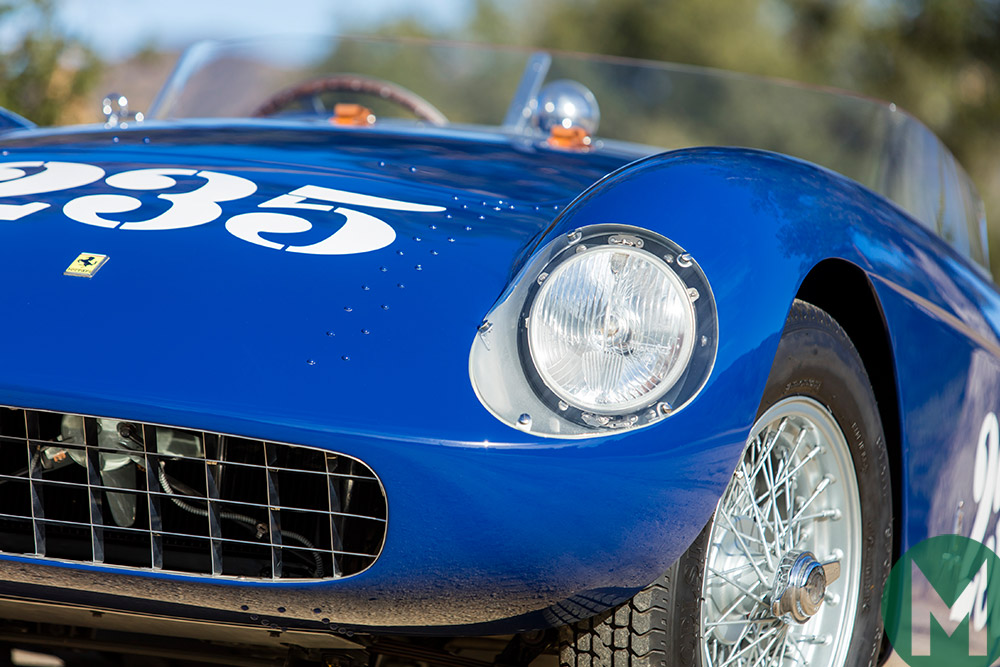 This Ferrari 500 Mondial Series I Spider swapped hands between some of the most famous racers and celebrities of the 1950s. It was raced by the likes of Phil Hill and Richie Ginther, and graced by the likes of James Dean, Zsa Zsa Gabor and Dominican playboy Porfirio Rubirosa.

Given that roll call of prominent names, it’s no wonder that it could fetch up to $6 million at Bonhams’ Scottsdale Auction on January 19, 2019.

Rubirosa, born in the Dominican Republic, was a charming personality who was raised in Paris and nicknamed Toujours Prêt (always ready…). He was once reported to have said: “Most men’s ambition is to save money. Mine is to spend it,” which explains his attitude to life succinctly.

He was an ambassador for the Dominican Republic and married American Tobacco Company heiress Doris Duke, and then Woolworth’s heiress Barbara Hutton – the richest woman in America. His passion for cars led him to compete in the 24 Hours of Le Mans and at Sebring, Reims and the Carrera Panamericana, often tearing across Sunset Boulevard at 100mph in his ‘spare’ time.

Mondials were taking the world by storm in that era. At the time, Ferraris sported V12 engines designed by Aurelio Lampredi and those engines would find their way onto the road too, with privateer racers interested in the torquey engine and flowing curves of the new sports cars. But the Mondials were powered by four-cylinder units.

Coachbuilders Scaglietti and Pinin Farina combined their knowledge to construct 27 Mondial Ferraris, two coupés and a few open sports racing cars, and the earliest Mondials were built in March 1954 to race in the 1955 Mille Miglia. Vittorio Marzotto finished second in a works Mondial behind Alberto Ascari, who was in a Lancia D24.

So in July 1954, Rubirosa purchased the 11th of 12 Mondial Spiders that was equipped with Bologna plates then shipped it to California. It stood out in deep blue as his girlfriend at the time, Gabor, did so too in a sky blue dress at the races on Labor Day.

He finished second in class and seventh overall and sold the car swiftly to John von Neumann.

Von Neumann was one of the founders of the California Sports Car Club and brought Porsches and Volkswagens to California for the Hollywood elite. The influential racer was said to have influenced Porsche heads to build the Speedster.

He employed the likes of Phil Hill to drive for Ferrari and campaigned this Mondial – repainted in red – at Palm Springs, Torrey Pines and elsewhere. Another famous Hollywood personality ogled the car at Santa Barbara: that would be actor, rebel and racer James Dean. But Dean was synonymous with Porsche throughout his life; a relationship that ended in tragic circumstances.

Richie Ginther and Phil Hill shared the Mondial, still under the ownership of von Neumann, up to the end of 1956. They drove it at Torrey Pines in January, a six-hour race that broke the engine. It was eventually switched out for a Monza three-litre power unit.

Lew Yates then bought the car and owned it up until 1959, equipping it with a Chevrolet V8 for the sake of his own wallet.

It passed through numerous owners including British aficionados, and it raced in the 2006 Mille Miglia before being restored to its 1954 condition and returned to Italy.

Ferrari put in an identical engine to the one that blew up at the hands of Phil Hill at Torrey Pines, an original gearbox, suspension and brakes at a cost of €475,000. Concours wins followed, expectedly, and now the car is estimated to fetch $5,000,000-6,000,000 at auction.