In the July 2020 edition of Motor Sport, a collection of Lancia’s Martini-liveried racers are front and centre. Martini’s involvement in motor sport has produced some of the most striking, memorable and gorgeous liveries to date. 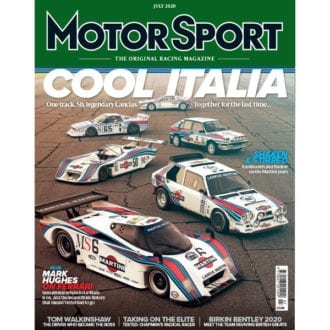 While a beautiful livery is by no means essential to winning, it certainly doesn’t hurt when the cars doing it are as striking as some of the entries in this list to bear the famous Martini Racing stripes.

Porsche victories at Le Mans in the 1970s associated the red and blue lines with success on the race track, while ongoing victories and Martini’s appearance on rally stages with Lancia turned an advertising campaign into an iconic racing combination.

A recent tie-up with Williams produced one of the most attractive F1 designs of recent years, and the return of the stripes to the podium.

In this gallery, we’ll look at some of the most successful and memorable entries in motor racing, from Lancia’s rally icons to Porsche’s Le Mans racers as well as how the design came about.

Martini’s involvement in motor sport had grown over the years prior, but overall victory for the Porsche 917K in 1971 at Le Mans put the Italian company in the racing spotlight.

Helmut Marko and Gijs van Lennep survived a race of attrition to win two laps clear of their closest competitors in a sister 917K belonging to Richard Atwood and Herbert Müller, and their win was the first of three for the Porsche-Martini combination at the famous race.

With racing stripes in blue and red along the curves of the 917, it was a livery design that became synonymous with Porsche, and the German manufacturer wouldn’t be the only marque to taste success with the brand on board.

Lancia’s affiliation with Martini might be better remembered for its rallying connection but two World Sportscar titles for Makes to begin the 1980s was one of the Italian manufacturer’s many accolades with Martini stripes on its cars.

Based on the road-going version, senior Lancia engineer Gianni Tonti worked with the car turning it into a race-winning machine off the back of the marque’s success with the Stratos in the years prior.

The Beta Montecarlo Turbo had shown promise in 1979 and the following year, a major effort was made to turn promise into performance. Riccardo Patrese, who’d been heavily involved in the Montecarlo’s development, and Walter Röhrl took three race wins during the 1980 season and another victory the next year to begin a decade of stylish success for Lancia.

Built by Lancia in a bid to reassert itself at the top end of World Endurance Championship racing, the LC1 had a difficult life as the FIA made plans to phase out Group 6 competition and instead replace it with the Group C class.

The LC1 was the first car built by Lancia with ground effect in mind and did see success on the race track despite its limited lifespan. The car managed three pole positions, three race victories and kept Riccardo Patrese in with a shot of the 1982 championship which he’d only narrowly miss out on to Jacky Ickx.

The Porsche 935 was near enough unstoppable in the World Sportscar Championship when it arrived in the mid-1970s. The marque claimed every title between 1976 and 1980 in the series and a customer-run 935 took overall victory at Le Mans in 1979.

The car was built to be light, agile and it certainly lived up to expectation on-track, achieving over 150 race victories including the Le Mans 24 Hours, Daytona 24 Hours and Sebring 12-Hours.

Built entirely around conquering Le Mans following a gasket failure during the 1977 installment of the race, the Moby Dick 935 certainly stood out based on body shape alone. Paired with the Martini stripes though, the car looked as quick as it went.

In its first competitive outing, it was taken to pole and victory by Jacky Ickx and Jochen Mass at the 6 Hours of Silverstone. Their pole and fastest lap times were just 4sec slower than those of James Hunt in his Formula 1 McLaren M26 at the corresponding 1977 British Grand Prix that year.

Despite the alterations made to the car, the Moby Dick missed out on Le Mans victory, succumbing to an oil leak mid-way through the race.

Designing the stripes: how the Martini livery is transferred to the cars

For two years in a row, Miki Biasion piloted the Lancia HF Integrale to World Rally Championship glory. The Italian piloted the car to a debut victory at the 1988 Rally Portugal and took another four victories that year on the way to the WRC crown. All told, the car won eight races that year and looked good in Martini dress doing it.

It followed on from the HF 4WD that Juha Kankkunen had won the ’86 championship in the year prior, and a year on in ’89, Biasion equalled his tally of five victories to go back-to-back, winning the world championship once more.

To this day, the HF Integrale remains as one of the most successful rally cars of all time.

Henri Toivonen took victory in a Delta S4 in its competitive debut at the RAC Rally in 1985 but testing had been far from straightforward for Lancia.

The car was uncooperative when it came to directing it with minimal feedback provided through the steering wheel and poor front traction combined for early headaches.

The S4 was eventually worked to be better, though after its first outing and victory, rivals in Audi and Peugeot got their acts together and restricted it to just three more wins that year as Kankkunen won the title in a Peugeot.

Rallying icons don’t get much better than this. As the final two-wheel-drive car to win the World Rally Championship for manufacturers, the Lancia 037 Rally Evo 2 will live on in the history books.

Five wins in the 1983 season against Audi’s Quattro A2 was good enough to overcome the German manufacturer in a tight championship by two points and Dario Cerrato piloted a 037 to the 1985 European Rally Championship title.

But its success is just part of the allure of the car. Bodywork complimented by the Martini stripes, it is one of the most recognisable rally cars to have ever been built.

Campaigned during the 1974 World Sportscar Championship against pure prototypes in preparation for its entry into the 1975 manufacturer’s championship the following year, the Porsche RSR was put through its paces and definitely earned its stripes in competition.

The car was the first turbocharged 911 Porsche built and its appearance at Le Mans in 1974 was a hugely significant moment in the history of the marque.

The car was taken to a second-place finish by Herbert Müller and Gijs van Lennep and prompted Porsche to focus on turbocharging with the car becoming a benchmark for the brand in its sports car racing endeavors.

While Martini branding has appeared on Lotus’ and Brabham’s before it, the Williams-Martini affiliation is the most recent in Formula 1.

The FW40 was the penultimate Williams car to feature Martini Racing stripes in the final F1 season before the introduction of the Halo.

The partnership between Martini and Williams gave F1 some of the more simplistic livery designs in recent years, but the stripes over the white car certainly turned heads on the track.