Le Mans’ GT category will switch to GT3-based cars in 2024, organisers have confirmed, as they plan for a cheaper generation of machines.

The current GTE cars will continue racing until the end of 2023, when the World Endurance Championship will adopt the new format.

It will enable manufacturers to race the same — or modified — versions of the machinery used in most worldwide sports car championships, potentially opening up the grid to more manufacturers, including McLaren, Bentley, Honda, Mercedes and Lamborghini, which already have GT3 cars.

The news from the Automobile Club de l’Ouest (ACO), which organises Le Mans and WEC, follows an announcement by IMSA that its WeatherTech SportsCar Championship will introduce a GT3 category next year.

Richard Mille, president of the FIA Endurance Commission, which will draw up the new set of regulations, said that they were designed to ensure amateurs could still compete. 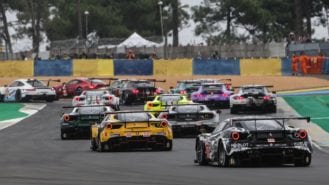 “As you know GT was always an important parameter for ACO and FIA,” he said at a pre-Le Mans 24 Hours press conference. “It’s important for us that many amateurs can race.

“The current situation is that until 2023 we will keep the current categories but from 2024 on we will have a new GT category which will be based on the current GT3 platform and our goal is to work on this topic during the second half of the year.

“We want all this to be finalised at the FIA World Motorsport Council at the end of the year.”

The number of WEC entrants in the expensive GTE Pro class has reduced in recent years, with factory teams from Aston Martin, Ford and BMW pulling out, although numbers in the amateur class have remained healthy.

The new GT3-based category will come into force in 2024 at the same time as revised LMP2 regulations.