Thanks to Radical Sportscars, our staff photographer Lyndon McNeil fulfilling his dream of going racing, and charting each step along the way. With his licence gained, it’s time for his first taste of the novice-friendly SR1 Cup with a test day at Donington Park 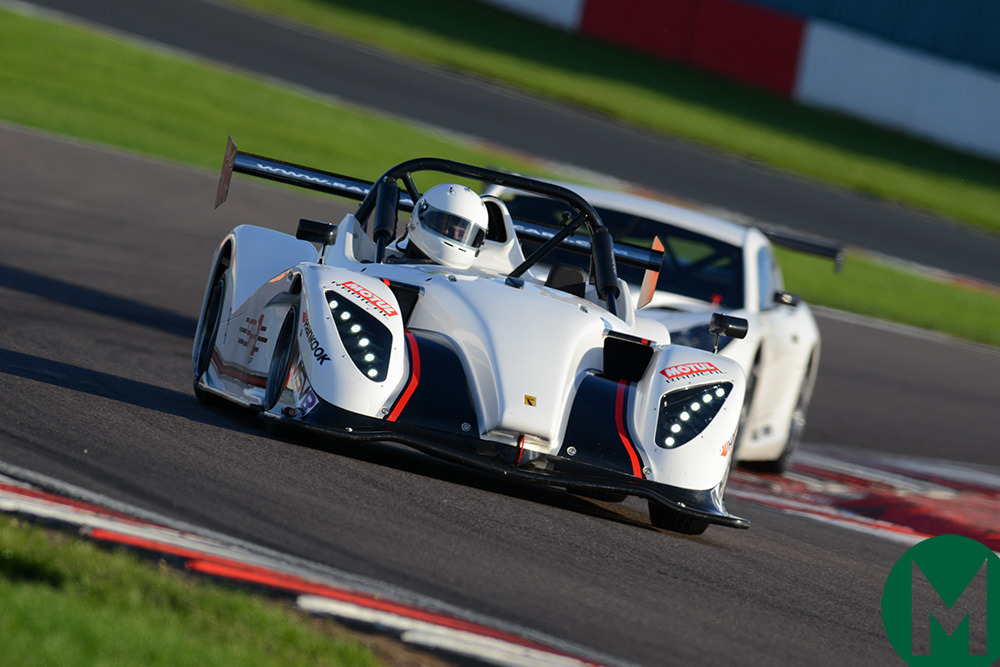 This is a feeling I’ve never had before.

I’ve been going to circuits since I was two – so 39 years now – but it suddenly hit me driving to Donington Park on a crisp autumn morning that I was about to drive. This time it would be me in a racing car. That’s when the fear strikes.

For anybody who hasn’t raced before, the feeling is a strange mixture of extreme excitement and trepidation, all bundled into the pit of your stomach. For anybody who has raced, I’m sure they remember it well. It’s something that clears with time and a healthy dose of engine revs.

Seeing the SR1 for the first time is quite intimidating. While it’s a squat, short and rather pretty looking thing, it’s also a purebred racing car. The team puts me in the car as soon as I set foot in the garage – both to calm my nerves and to ensure that I’m comfortable.

Looking after me for the day is professional driver coach and seasoned racer Stuart Moseley. He knows his way around Radicals, having raced them himself professionally for years, so I’m in safe hands.

Prior to the first test, my track driving experience was limited to a track day in a mate’s Ford XR3i and my ARDS test – not to mention a fair few years driving the Red Rocket Recovery truck during my marshalling days at Snetterton, but that was hardly ever on the racing line…

It’s clear that I have a lot to learn, and those first few laps are eye-opening.

Part one – How to go racing: Getting your licence

The SR1 may be short, squat and pretty, but dear lord is it quick. You may only have a 1300cc Suzuki Hayabusa behind you, but when you and the car weigh in at just over 500kg, it feels like a rocket ship. You can bang through the gearbox with the paddle shift sequential system in seconds, and the car happily revs all day as it throws you towards the horizon.

The presence of cars around me is jarring and I always feel like an obstacle to other drivers. Pretty soon I manage to find a rhythm and some decent laps. Or so I think.

After a 20-minute run that feels like just five, I’m back in the pits and out of the car, jabbering as the adrenaline surge hits. First, we take the memory car out and it’s back into the truck with Stuart for a debrief.

I’m about 10 seconds off the pace.

The video makes everything look so slow, it’s almost embarrassing. But I have Stuart to look over the data with me.

He talks me through things like my brake pressures, racing lines, steering angles and throttle applications. There are no excuses and everything you do is tracked and recorded, either by GPS data or mechanical measurement.

After a 30-minute session with Stuart, I know where I’m going wrong. I’m being too gentle on the brakes, lightly touching them instead of applying any meaningful pressure, and I’m too hesitant with the accelerator.

Time for run two. I head out, this time with a clue as to where the circuit really goes, rather than staring at every apex backwards from a snapper’s angle. I know how I should attack it, with Stuart’s advice fresh in my mind. Suddenly, five seconds are knocked off the lap timer.

More: How data made me a faster driver…

Further debriefs reveal that braking is definitely my weak point. I’m not lacking in commitment through the quick stuff, but it’s the controlled deceleration that I’m finding it hard to get my head around.

Knowing this, I head out for another run and I pressure the pedal a bit too hastily coming over the brow down the straight into the club chicane. I feel the rear lock, but forget to release the pressure to return the grip and the car swaps ends on me. Luckily it’s a harmless spin, but enough to completely knock my confidence just as I was building to a high. A perfect example of how the sport can build you up, and then knock you straight back down.

Straight back into the truck, and Stuart fully explains my mistake. Just understanding what made the car do that begins to build a positive mentality again, just in time for a final run.

I’m told the worst thing you can do is get out of a car with a bad memory, because it then lingers. It’s easy to forget the great times and only remember the bad, so I head out for a final run determined to form a good memory.

The result: my best time of the day. I find more than seven seconds from my first run, and get out of the car absolutely buzzing.

My first day as a racing driver, and how much I’ve learnt is immeasurable. Next stop is when it gets real at Brands Hatch.