Thanks to Radical Sportscars, our staff photographer Lyndon McNeil is getting to fulfil his dream of going racing and charting each step along the way. Now it’s crunch time, as race day arrives 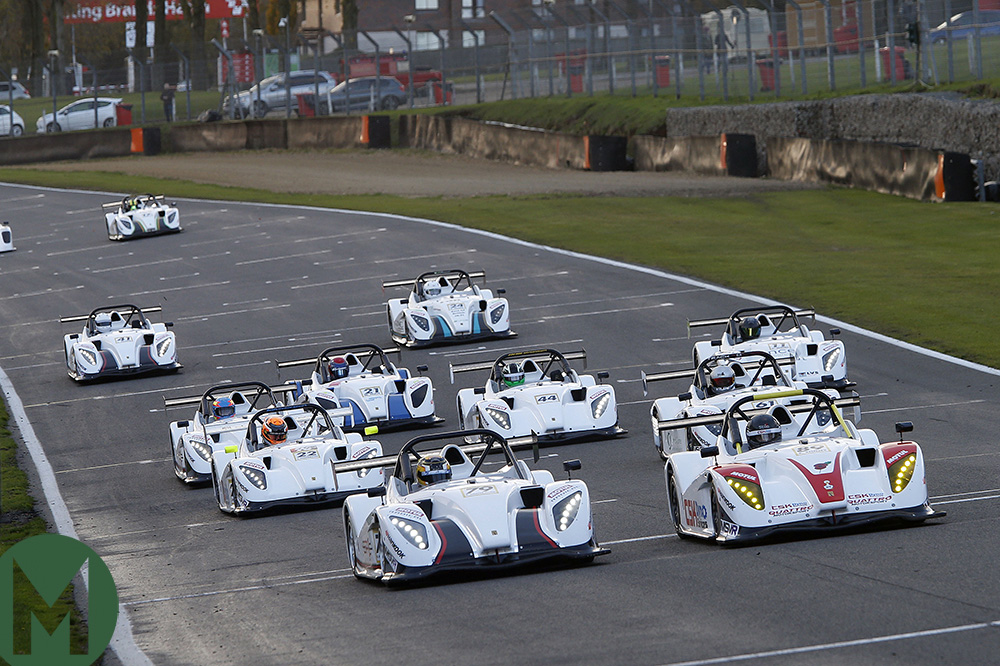 Contrary to every expectation I had, I actually sleep well. I’ve heard multiple horror stories of fellow racing rookies enduring sleepless nights on the eve of their competition debut. I half-expect to join them, but in truth, I feel pretty comfortable after all of the preparation I’d put in.

Everything I learnt, from the first test, to the simulator session, to the tricky Friday test day in every condition imaginable, helps me feel calmer.

Saturday morning dawns just as Friday left off – cold and wet. I get a coffee from Radical’s hospitality tent and then sign on. Signing on is satisfying. I feel that swell of pride at finally getting to compete, and my dad is there to support me too.

Next up it’s the driver briefing. The SR1 Cup clerk of the course, Gary Tanner, gathers everybody together for a quick talk through how the day will run and the basic rules and regulations.

We’ll have 20 minutes of qualifying and two 20-minute races. This is the first time I’ve seen all of my fellow competitors together and, even though we’re due to go wheel-to-wheel in a matter of hours, there is plenty of handshaking and advice being exchanged between the guys at the front and the rest of the field. Everybody seems genuinely pleased to have me racing with them, too.

Before I know it, I hear my SR1’s engine roar into life in the garage behind me to signal the countdown to qualifying. With my engineer taking charge of all things mechanical, the only tweak in my control is the brake bias.

Throughout Friday I’d been playing with the bias balance, turning it further toward the rear the wetter the track got to avoid locking the fronts and sliding off.

“Remember where you left the bias from yesterday?” my engineer asks, “because you’ll probably want it forward a bit more as it’s getting a bit drier now.”

More: How to go racing: the pre-race test

A quick half-turn to the front and my car is wheeled up to the assembly area ahead of qualifying – my first-ever competitive session. Assembly areas can be strange places, with the atmosphere a mixture of nerves and excitement.

Many drivers opt to get strapped into their cars and stay in them for the wait until the off, but I decide to get into my car as late as possible, to avoid sitting still for too long.

Safe to say, the adrenaline is pumping as I watch the final laps of the qualifying session before us drawing to a close. Then the marshal’s whistle: time to get ready.

Getting buckled in feels different. More real. ‘Don’t panic now,’ I tell myself, ‘just do what you’ve always been doing. It’s just another test session’.

I’ll never forget pressing that starter button, and feeling the 1340cc Hayabusa fire up behind me. There’s something therapeutic about the vibrations. All of the nerves and tension just melt away, and suddenly it’s just you, the car, and the track.

I take the first few laps slowly, to build up my confidence and assess which parts of the track hold the most grip in the greasy conditions. My engineer asked if I wanted my times and position held out to me on my pitboard. I declined then, but halfway through qualifying I regret that choice. Where was I in the order? Was I quick or slow?

I chip away at the times until the track has developed a nice, dry line and I decide to go for it, trust in the car and my own abilities and see what happens. The lap already feels good as I pile into Paddock Hill, late on the brakes and hard on the throttle on exit as the SR1 carries me up towards Druids.

I hold my nerve and nail Graham Hill Bend before carrying as much speed as I dare through the final two turns, and across the finish line to take the chequered flag.

It’s my first sub-60sec lap, a 59.586sec, and is good enough to put me ninth on the grid. I’m delighted! There are already tears welling in my eyes as I pull back into the pits, well before I see my dad reduced to tears by seeing his son place inside the top-10 on a race debut neither of us thought would ever happen just a few months ago.

But now another lesson. Downtime is a killer! After qualifying my adrenaline is sky-high, I’m alert, bouncing off the walls and shaking. I’m ready to go again, but the only problem being that I now have no driving to do until after lunch.

Fortunately, the mid-November date means it’s a nice compact meeting run by MotorSport Vision Racing, so it’s only about two hours of downtime, but it’s still enough for the adrenaline to subside and the nerves to begin creeping in again.

I while away a good hour sat in the Radical truck looking at data. And not just mine. I see championship challenger Ryan Harper-Ellam’s pole lap, as well as those from my other team-mates Mackenzie Walker, Chris Short and Mark Williams, the last of whom will start alongside me.

The open data analysis is great because you get to see where your deficiencies or strengths are against everyone else. Everybody has identical SR1s, so if one driver is pushing the envelope and getting away with it then there’s no reason another driver can’t also.

It’s an eye-opener how much more Ryan is on the throttle for his lap than I am, that’s where my 2.7sec qualifying deficit comes from. But it’s reassuring to see how much abuse the SR1 can take without letting go.

Out of the truck, and it’s almost immediately back to the assembly area to be ready for race one, just after midday. I feel more confident than ever, but there’s a new challenge waiting – a rolling start!

When my colleague Robert Ladbrook raced an SR1 last year he stalled it on the line when the series ran standing starts. Because it’s basically a bike clutch, it can be tricky to get moving under pressure. This year the series opted to use rolling starts instead, to remove that pressure.

As I form up at the end of my green flag lap, I’m convinced I’m almost pushing the guy in front, just as everybody had told me to do beforehand. Turns out I’m a good 20 feet back. Still yet to work out this racing perspective of how close you can actually get to another car…

I lose a place at the start and with the track still being wet off-line. It’s very much single file and damage limitation for the first few until I get my head into it. I’m closing on the car in front, and try to make a dive up the inside at Druids, only to get on the wet and feel the rear start to step out. I hold it, but the loss of momentum costs me another spot.

Determined to fight back, and angry at my own mistake, I pile the pressure on the guy in front. I’m all over him through the fast stuff but struggling to get the power down out of the slower turns.

However, I make a few lunges around the outside at Clearways and looking inside at Druids and eventually get my reward as he loses it on the exit of the hairpin. I’m hard on the brakes in avoidance, but get the place. I’m counting that as my first overtake…

I take the flag in 11th after what seemed like the fastest 20 minutes of my life. And once again, I’m buzzing.

More: How to go racing: Using a simulator

My confidence is up for race two, and I’m determined to be more aggressive, this time on a dry Brands Hatch for the first time, which probably did me no favours. Regardless, I know what this racing lark’s all about now and I’m starting to really relax into it. Let’s get the start right this time. Right?

Wrong. There’s still a lot of room for improvement here – about 15 feet of it to the bloke in front when the lights go out. Never mind, I hold my line and my place into Paddock Hill. The dipping sun makes it tough to see into corner like Surtees, but I stay in touch with the pack in front before Gavin McAlpine starts to attack me and I have to learn a new skill: defending!

My lines start to get more shallow, which costs me on corner exits, but I’m holding track position. I fend him off until lap 10, when I see his nose cone just sneaking up the inside on the run into Surtees and think better of trying to match him around the outside of the turn.

It’s P9 at the flag and also mission accomplished. I return to the garage without a scratch on the SR1, now not quite as gleaming as when it started the day, and with a huge smile on my face and a giant sense of self-satisfaction. Cue much hugging with my family and even employees of Radical. I can’t thank them enough for the last few weeks.

From complete novice to fully-fledged sports car driver. And it only took a matter of weeks. I’d recommend the process to anyone and will be doing so for the foreseeable future. Just a few months ago, starting racing seemed complicated, difficult and inaccessible.

But, if you get the chance to get help from a firm like Radical, just take it. You’ll soon discover that getting started with the right people around you isn’t as complex as it once seemed.