Hurley Haywood was handed his second victor’s trophy at Sebring forty years ago this weekend.

After 12 gruelling hours, his Porsche 935 had crossed the line three laps ahead of its closest challenger, but amid the celebration there was sadness for Haywood.

The Sebring win was the first since the death of his longtime boss, team-mate and close friend, Peter Gregg.

Although it’s Hurley’s name that is up there with the greats — thanks to five Daytona wins, three at Le Mans, and those two at Sebring — it was Gregg who was instrumental in Hurley’s rise, and who shared his early success.

Lining up on the grid was self-preservation for Hurley, who had seen his friend hours before his death by suicide.

Speaking to Motor Sport about competing with the loss of his racing soulmate on his mind, Haywood described it as “a really weird, weird feeling. Racing is a wonderful mask for things that are going on inside you.”

Haywood had first got started racing his Corvette down at local Florida events, which is how he initially encountered the mercurial Gregg.

“I did an event laid out in a supermarket parking lot and the guy who owned Brumos, the Jacksonville Porsche dealership, turned up,” Haywood told Motor Sport in 2016. “He was a well-established endurance racer with 904s and Carrera Sixes, and he’d brought an immaculately prepared 911 and a whole race team to support him.

“Well, we tied, so there was a run-off, and I beat him. He came up to me afterwards and said, ‘You must be pretty good to beat me. Why don’t you come back to my place, my wife’s cooking a barbecue.’ That was how I met Peter Gregg.” 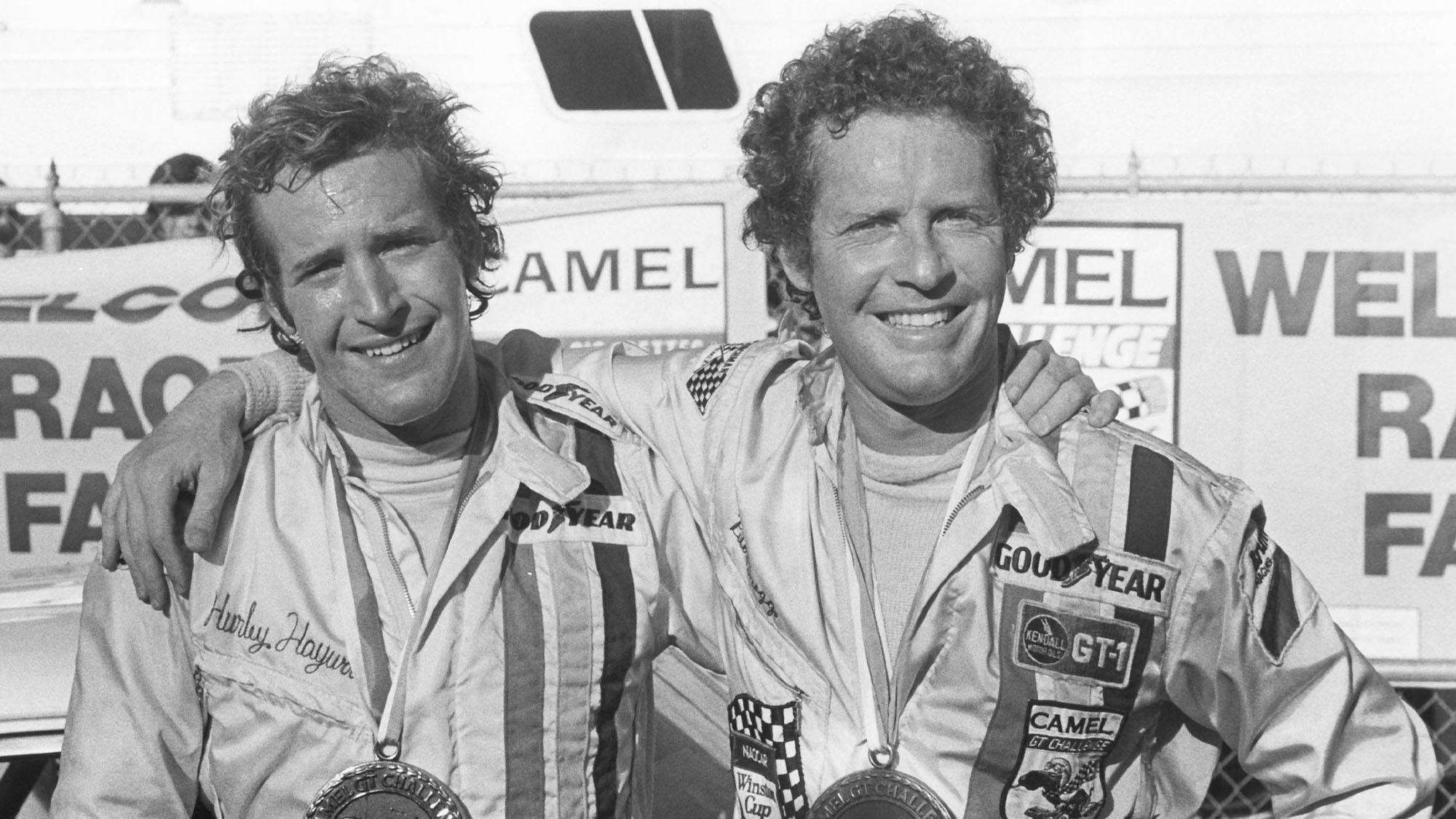 The two immediately paired up under the Brumos banner and won their class at the 1969 Watkins Glen 6 Hours, racing against the likes of Siffert, Elford, Attwood, Redman and Rodriguez.

From there they would claim multiple IMSA championships before taking both the Daytona 24 Hours and Sebring in 1973, beating the works teams in their Brumos 911.

Further North American success came together, whilst Haywood also won Le Mans on his debut in ‘77. Unfortunately, their relationship soured in 1980 when Gregg blamed Haywood for the former not being picked for a works Porsche Le Mans drive.

Though the two had been so close as to have been racing brothers, and even once been rumoured to have been romantically involved, the relationship was not without its difficulties.

Gregg’s personality might have been described as ‘difficult’ – associates have described him as one day acting like your best friend, the next your enemy. 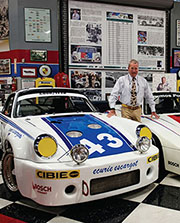 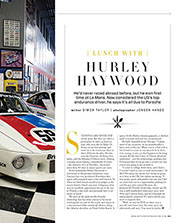 He’d never raced abroad before, but he won first time at Le Mans. Now considered the US’s top endurance driver, he says it’s all due to Porsche   Writer Simon…

“I don’t think anybody really understood mental health at that time, the issues that he was going through,” says Haywood.

“We all knew that something was wrong. He was taking medication, but Peter always thought that he was smarter than medication. So in a lot of cases, he didn’t take it.”

After a period of estrangement, the two finally met up again in late 1980.

“Peter called me up as though nothing had happened,” said Haywood. “He’d met a girl called Deborah and had married her very quickly, a few days before. He said she was cooking lunch and why didn’t I come over?”

“It was a total surprise. I went over, everything was totally cordial, and we had a really nice lunch. Peter was full of plans for the future. He was planning to go Indy racing with me as the driver, he had it all mapped out. Next morning he went to a shop, bought a gun, walked onto the beach and shot himself.”

Looking back upon the event, Haywood feels that even without the widespread lack of mental health awareness, there isn’t a huge amount he could have done to intervene.

“We didn’t really understand what the signs were that say: ‘This guy needs some help.’ And even if we did, I seriously doubt whether Peter would have taken that advice,” he says.

“Peter always thought he was smart enough to deal with it on his own, in his own way. But we now know that that was not the case.”

Loyal to his friend, Haywood helped Gregg’s family the best he could after his passing, but in terms of his own self-preservation, the endurance legend turned to what he knew best for therapy: racing. 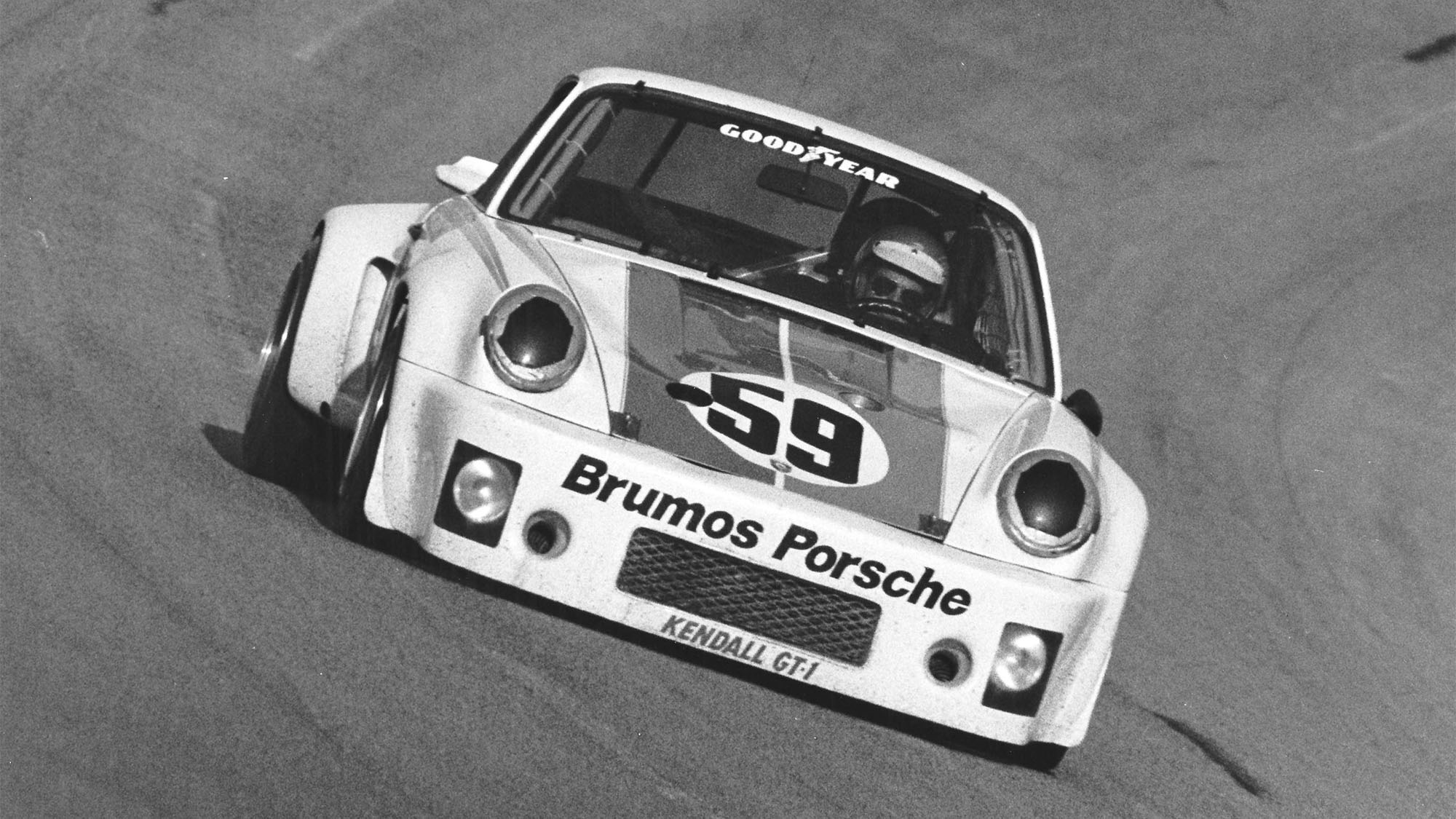 First after Gregg’s death was 1981 Daytona 24 Hours, which ended in a DNF. Next up was Sebring. His friend’s loss was still very much at the forefront of his mind as the visor came down.

“It was difficult, because we had lost Peter and everybody felt it. He was a pretty significant reason why I got some early success and so not having him there was kind of a really weird, weird feeling,” says Haywood.

“But we pressed on – everybody deals with those kind of losses in their own way.

“Racing is a wonderful mask for things that are going on.”

Haywood was entered at Sebring in ‘81 with an associate of Gregg’s, team owner Bruce Leven. Leven was also driving as an amateur, with three-time Le Mans winner and IMSA legend Al Holbert making up the trio, entered in a Porsche 935/80.

“Al was a dream to drive with,” Haywood remembers. “He always did a monumental job, he was always good to the car, he understood the mechanics behind them. He would be one of my top picks to drive with.

“Bruce was very adequate, he didn’t make mistakes but he was an amateur driver. So, in a race like Sebring, all the owners had their own agreement where they would do one or two middle stints, and then that usually was enough for them – they were competitive with each other. 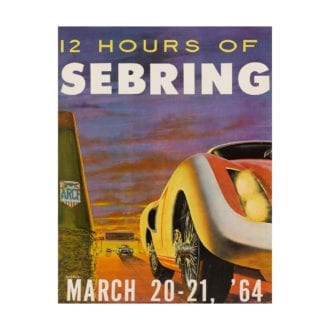 “Then the pros took over, and they’re there for the major part of the race.”

Despite absence of Gregg, Haywood says his presence was still very much felt.

“Bruce Leven’s team and Brumos were very closely linked,” says Haywood. “If you look at the race car we had in ‘81, it had Brumos written on the car.

“Peter [Gregg] and Bruce sort of had this agreement that we would run the Brumos name on all his cars.

“So even though Bruce hired me away from Peter, the two of them still had a good relationship and shared the name.

“Bruce was really affected by Peter’s death. He ran the Brumos name at Sebring in ‘81 as a way to extend that friendship.”

Now Hurley had carry the Brumos name to victory – a challenge not lessened by having a team with winning pedigree.

“Most drivers would agree that Sebring is the most brutal racetrack in the world,” he remarks.

“Cars are airborne all the time over the bumps, especially when you’re talking about modern cars and the stiffness of their suspension.

“They’ve made improvements over the years, but it still [even now] takes a big toll on equipment and drivers.

“It’s at a time of the year where the weather is hot, humid, and so 12 hours at Sebring is every bit as tough as 24 hours at Daytona.” 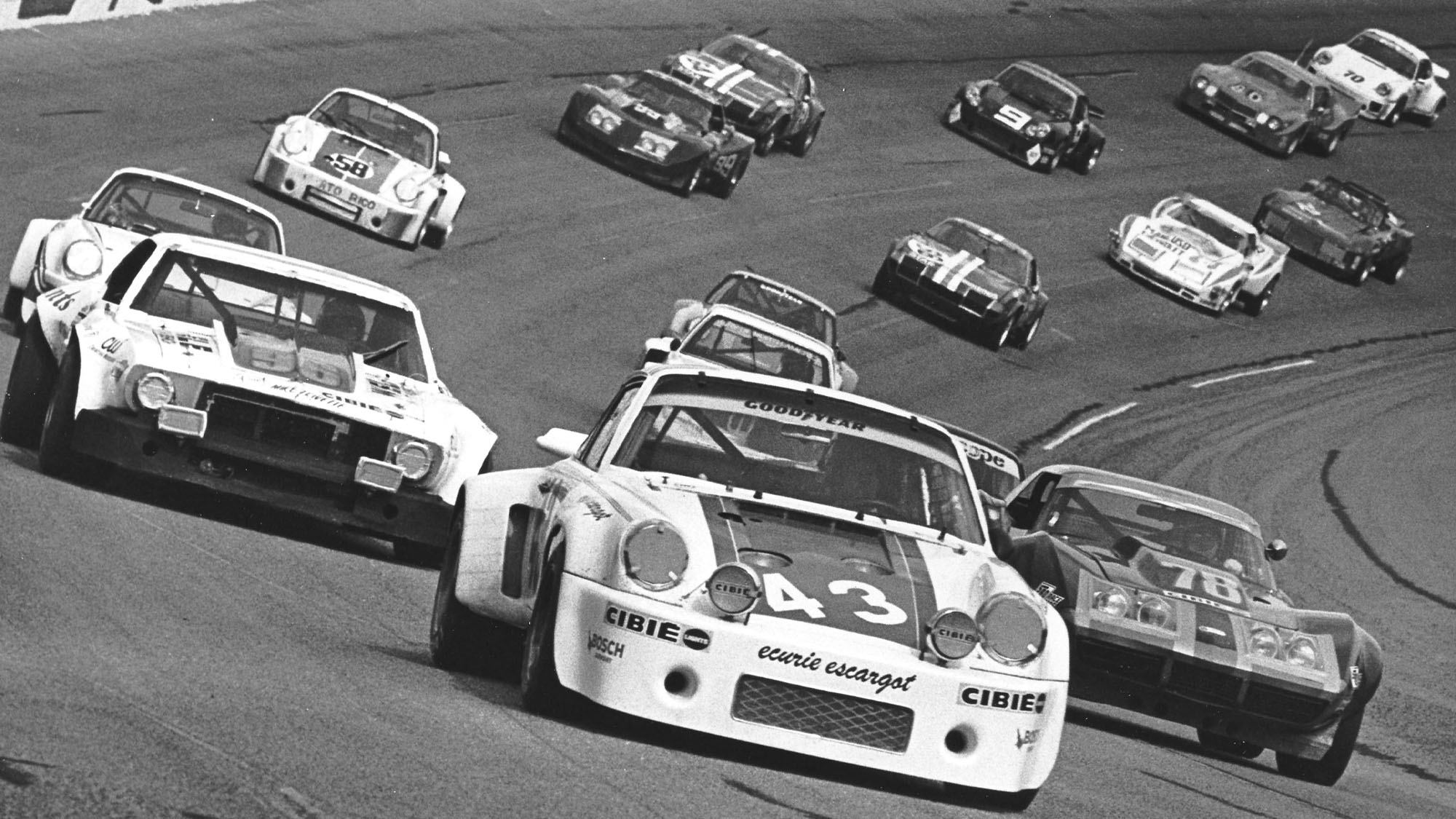 Something that marks out Sebring from Daytona is the light – or lack of it.

“Unlike Daytona, which is fairly well lit, once you clear the Sebring pits here you’re in dark darkness, so you need headlights,” says Haywood.

“You’ve got so many cars on the infield that are driving around that is somewhat distracting, seeing the headlights of cars.

“If you miss the pole which marks the corner on the back straight, you’re off in the boondocks. 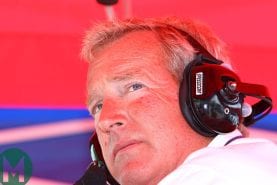 “This happened to me once, when I was leading a group of five 956s. We all missed the turn and everybody ended up in knee-high grass!

“It was amazing that nobody hit each other, but we had to sit there for a minute or two and figure out where the racetrack was. That was a shot of adrenaline – a real eye-opener!”

Haywood’s rise and entering into endurance legend has been synonymous with Porsche, and the 935/80 the Leven team was driving at Sebring was particularly to his liking.

“It was a beast, but it was fun to drive. Every driver I think had his own style of coping with a 991 car which had a lot of horsepower.

“The engine was in the rear, and it was somewhat tricky to drive. It was always a challenge to get the setup right, but once the setup was good, and you had a good crew chief that understood all that kind of stuff, the cars were really, really fast and very fun to drive.”

Once the race got underway, Haywood said it became clear their car was well suited to Sebring.

“Bruce’s cars were always pretty radical on the body work,” he says. “The body style worked at Sebring, had a lot of downforce but was still very fast on the straightaways.”

Despite the pace advantage, Haywood comments that you were always reminded of which racetrack you were on.

“The surface was brutal on the car and the suspension – every point on the car was stressed” he tells us.

“It was a pretty tough and intense race. We went back and forth from first, to third or fourth and then caught up again.

“Al and myself did most of the driving. We just kept the pedal to the metal, survived and won.

“It was a good race. When you’re in a race like that, even if you’re not on the podium, just finishing is an accomplishment.”

After victory at Sebring, Haywood would go on to make more endurance history. Two more wins at Le Mans were added to an eventual joint-record five Daytona wins.

However, he says the pain of losing his friend with his friend Gregg stayed with him, dealing it in the same way as other difficulties he encountered in his life – compartmentalising it, as so many drivers of the era did

“When I broke my leg at Mosport in 1983, the race car was the only place that I could go and not think about the pain that I was in, because you were so focused on what you were doing,” says Haywood.

“It’s the same thing with a loss of a friend or somebody that’s important. After the race is over, it’s a different story.” 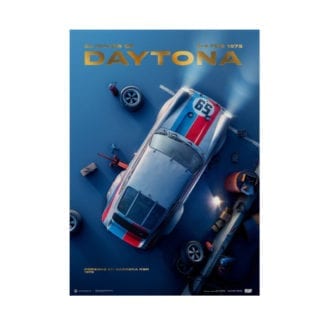