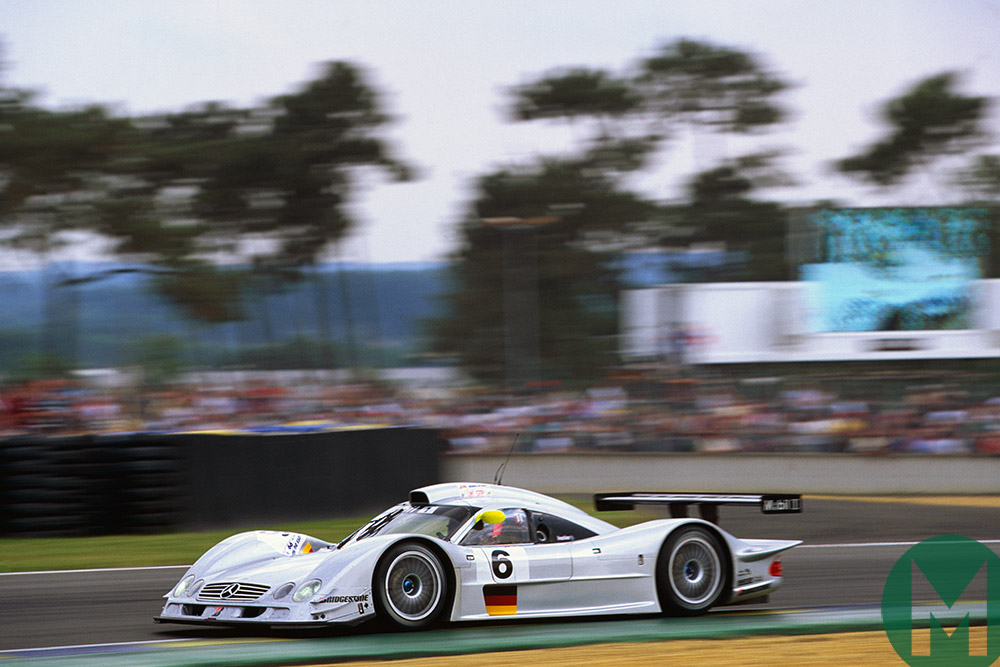 “Can you imagine what a shocker that would have been? Your first-ever lap of Le Mans and it ends 30 feet in the air, or in the woods?

“That probably would’ve also been my last lap of the place.”

You don’t hear many racing drivers admit that they were glad to miss their chance to enter the big stage. But in the summer of 1999, Darren Turner had that exact thought as he sat in the Mercedes garage at Le Mans. Just as Mark Webber flipped in the CLR for the second time, in front of the world’s cameras.

It was probably the only time that being a reserve had been the favourable option.

Turner had finished runner-up in Formula Palmer Audi the year before and had taken on a test driver role with the McLaren Formula 1 team for 1999. He concentrated solely on the mountains of test work required during those unrestricted years of Grand Prix racing, but that deal also opened the door to Mercedes’ Le Mans programme. After a test at Dijon aboard a 1998 CLK model, the Stuttgart firm offered the then-25-year-old a reserve role.

The cancellation of the GT1 category of the FIA GT Championship left Mercedes with Le Mans as its sole focus. Its three CLR LMGTP entries were to be crewed by Webber, Jean-Marc Gounon and Marcel Tiemann, Peter Dumbreck, Nick Heidfeld and Christophe Bouchut, and Bernd Schneider, Franck Lagorce and Pedro Lamy.

“It was a huge programme to be involved with,” recalls Turner. “The infrastructure, the funding, everything was simply massive and Mercedes wanted to win. I only actually got to drive the CLR once, when I stood in for Peter to do a 36-hour test at Paul Ricard. I probably drove it for about eight to nine hours and at that point it felt unbelievable compared to anything I’d driven before.

“I was only really doing donkey work in the F1 test programme: a lot of straight-line stuff for aero mapping and simulator work, the stuff the race drivers didn’t need to be doing. So when I got in the CLR it was amazing, but about the only realistic reference I had was the Formula Palmer Audi! We ran the car in low-downforce for the whole test and there was never an inkling of a problem… until we got to Le Mans.

“I’d never been to Le Mans before, so I was massively excited for it, and we knew everything with the cars felt solid and reliable beforehand.”

But when the race weekend actually began, it soon became clear that all was not well with the trio of CLRs, and Webber’s was worst affected. The first airborne accident happened on Thursday evening, which was initially written off as a freak accident. But Webber’s second, on his out-lap for the Saturday morning warm-up, signalled a much more serious issue.

“On Wednesday night everything seemed OK,” says Turner. “I went trackside at Indianapolis and the front of the car was visibly bouncing up, down, up, down in the high-speed stuff. There was no braking, so it wasn’t down to pitch. It didn’t look right to me, but when we discussed it with the engineers they said ‘that’s how it should be’, so who were we to question it? But it would have been so simple to spot on the telemetry and surely would have been the first indication that the front of the car was doing something unusual.

“Then Mark had his big accident on Thursday night and the team set about repairing the car. I was taken aside and told I’d probably be needed in the car for the race, so I started poring over the data as I knew I’d only have the best part of warm-up on Saturday to get my head into the thing. As far as I was aware, I was due to be first out in that car on Saturday, not Mark…”

As it turned out, Webber recovered sufficiently to inform the team on Friday night that he was fit to race and get back into the CLR.

“When Mark said he was going out for warm-up, I said I wouldn’t be driving at all that weekend, because you can’t go into the race at Le Mans having never done a lap,” continues Turner.

“The fact that Mark then went out and the car went up on the out-lap… that would have been my first-ever lap. That’s just a scary thought. I don’t know if the rebuild was rushed and the set-up was wrong or whatever it was, but something really wasn’t right.

“The engineers immediately got on the phone to the McLaren technical team, who were all off at the Canadian Grand Prix that weekend, and the plan was made to run the cars with more downforce. The thinking was that would be okay with people saying ‘we might be crap in a straight line now but at least we won’t fly!”

The engineers added additional dive planes to the front of the CLRs in an attempt to better anchor them to the track, but when Dumbreck was sent skyward on Saturday evening, enough was enough.

“I was in the commentary box when Peter’s car went up, and I instantly knew it was Peter in it,” says Turner. “I dropped everything and ran to the garage to try and understand in real-time what was happening. The fact the trees along the section of track down to Indianapolis were cut down earlier in the year probably played a huge part in him emerging unscathed. If they’d still been there it could have been a completely different outcome that I don’t want to think about.

“But it was also testament to Mercedes for building such a strong car, even if it had a major flaw.”

Shortly afterwards Mercedes ordered the withdrawal of the sole remaining car of Schneider, Lagorce and Lamy. “I felt sorry for the other guys, as their car had no problems all week,” adds Turner. “But I’m sure they were starting to think ‘So, when is this going to happen to us?’ Knowing you’ve got a car underneath you that could bite at any time… that’s not nice to drive.

“The mood afterwards was so sombre. Everyone cared about Peter’s wellbeing first and foremost, but when those shutters come down it’s always very hard to accept that that’s it and the chance has gone.”

Dumbreck himself openly admitted that he never considered not racing that weekend, but what were Turner’s thoughts?

“If Mark hadn’t been up to it and I was told to get in that car on Saturday morning, 100 per cent I’d be in it. Why would you not?” he says. “All the hard work to get there and then to get a chance at that level… as a driver you always play the odds. You think that if something has happened once then it simply cannot happen again. You have to think that way. But that weekend definitely showed that lightning can strike more than once.”

The current issue of Motor Sport features never-before-seen photos from inside Mercedes during the 1999 Le Mans 24 Hours. Order your copy here