Stirling Moss preferred the C- to the D-type.

The latter was tauter and faster – at Le Mans at least – but the former was more adaptable and kinder to a burgeoning career.

The pride he felt as Jaguar’s secret weapon was pushed into scrutineering prior to the 24 Hours of 1951 was perhaps equalled only by his British Grand Prix victory for Vanwall at Aintree six years later.

“We really did feel as if we were showing the flag, and that counted for a lot,” said Britain’s most famous and popular racing driver.

‘The Boy’ had signed to drive for the ‘Leaping Cat’ on the eve of his 21st birthday in 1950, having proved that he could handle a ‘man’s car’ – an alloy-bodied XK120 – in the tipping Tourist Trophy rain of Dundrod.

He arrived unencumbered by the pre-war baggage that wearied some of his peers and thus he saw no reason why Britain could not succeed on the wider stage.

The C-type confirmed that. 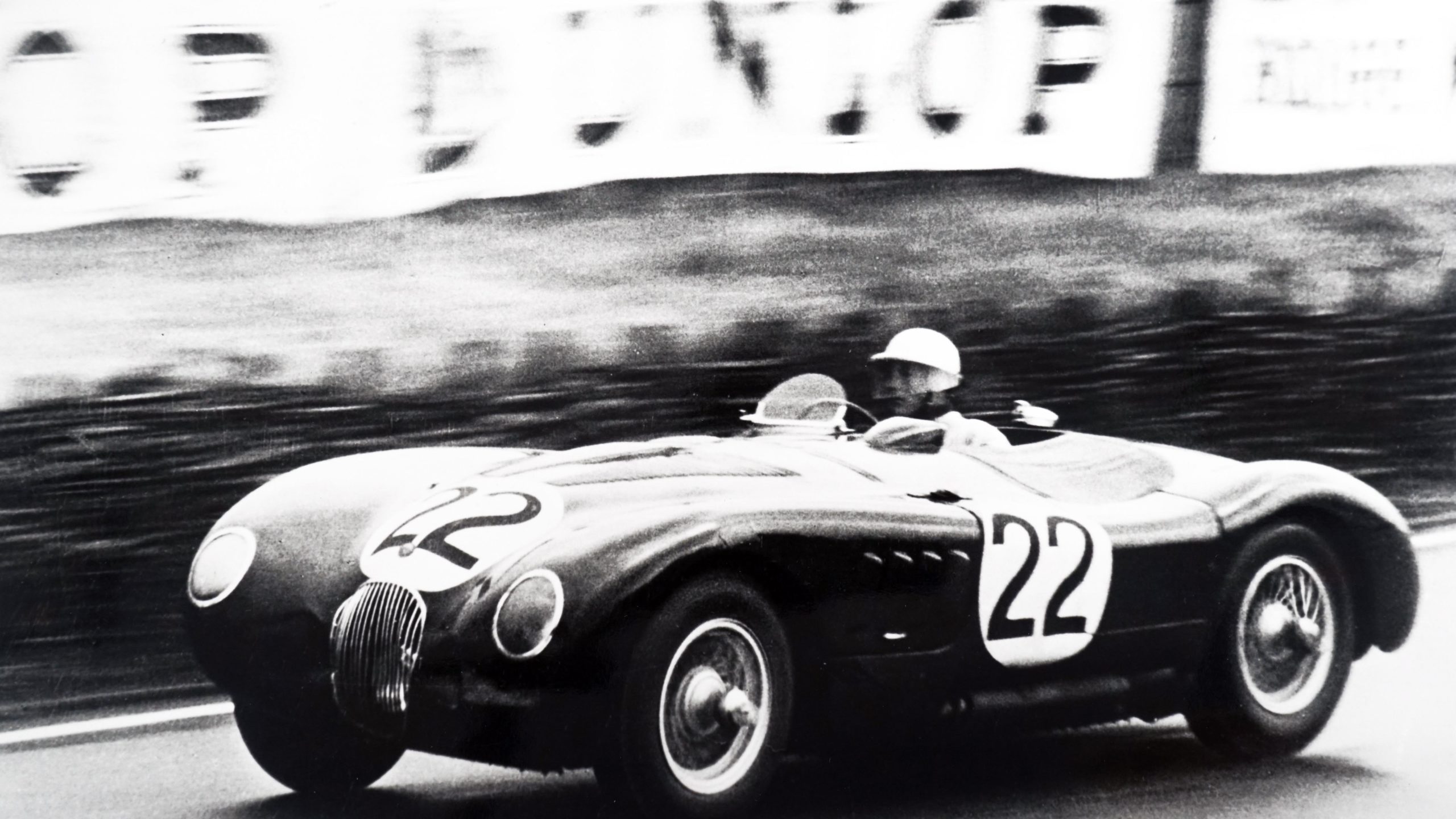 Moss’s run at Le Mans in ’51 was searing, if short-lived

Then he drove BRM’s V16 Grand Prix challenger and began to wonder; it would remain forever the worst car he drove.

In contrast to that magnificent, hugely hyped flop, Jaguar aimed lower and with greater accuracy and perspicacity.

Its XK120C was an out-and-out spaceframe racer – albeit underpinned by that sculptural, proven in-line ‘six’ – which, unlike the BRM – a pre-war design in a post-war world – looked to the future of speed.

Aerodynamicist Malcolm Sayer had combined a mathematical mind with an artistic bent – slide rule, seven-figure log table and pencils of varying hardness – to create an enveloping shape as beautiful as it was efficient.

Suddenly Britain found itself ahead of the French curve. 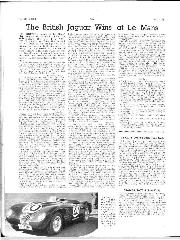 A British victory at Le Mans! Thanks to William Lyons for building the new Type “C” XK 120 Jaguar, to Peter Walker and Peter Whitehead for driving one to a…

When Moss, on a measured half-throttle yet still pulling 150mph-plus along the Mulsanne Straight, breezed past the Talbot-Lago – a GP car in two-seater, cycle-winged disguise – of José Froilán González on the opening lap, the template of that groundbreaking Le Mans was set.

The beefy Argentine promptly scrabbled back past under braking – the Jag was still on drums, too, in 1951 – only for Moss, grinning inwardly, to breeze by once again on the run to Arnage.

Five laps of this taunting and the Talbot’s goose and much else were pretty much cooked.

Moss led by a lap after two hours and headed a Jaguar 1-2-3 after four.

It was too good to be true.

A copper oil pipe in the sump succumbed to vibration and bearings ran dry after eight hours. The same problem had sidelined the sister car of Clemente Biondetti/Leslie Johnson four hours earlier. 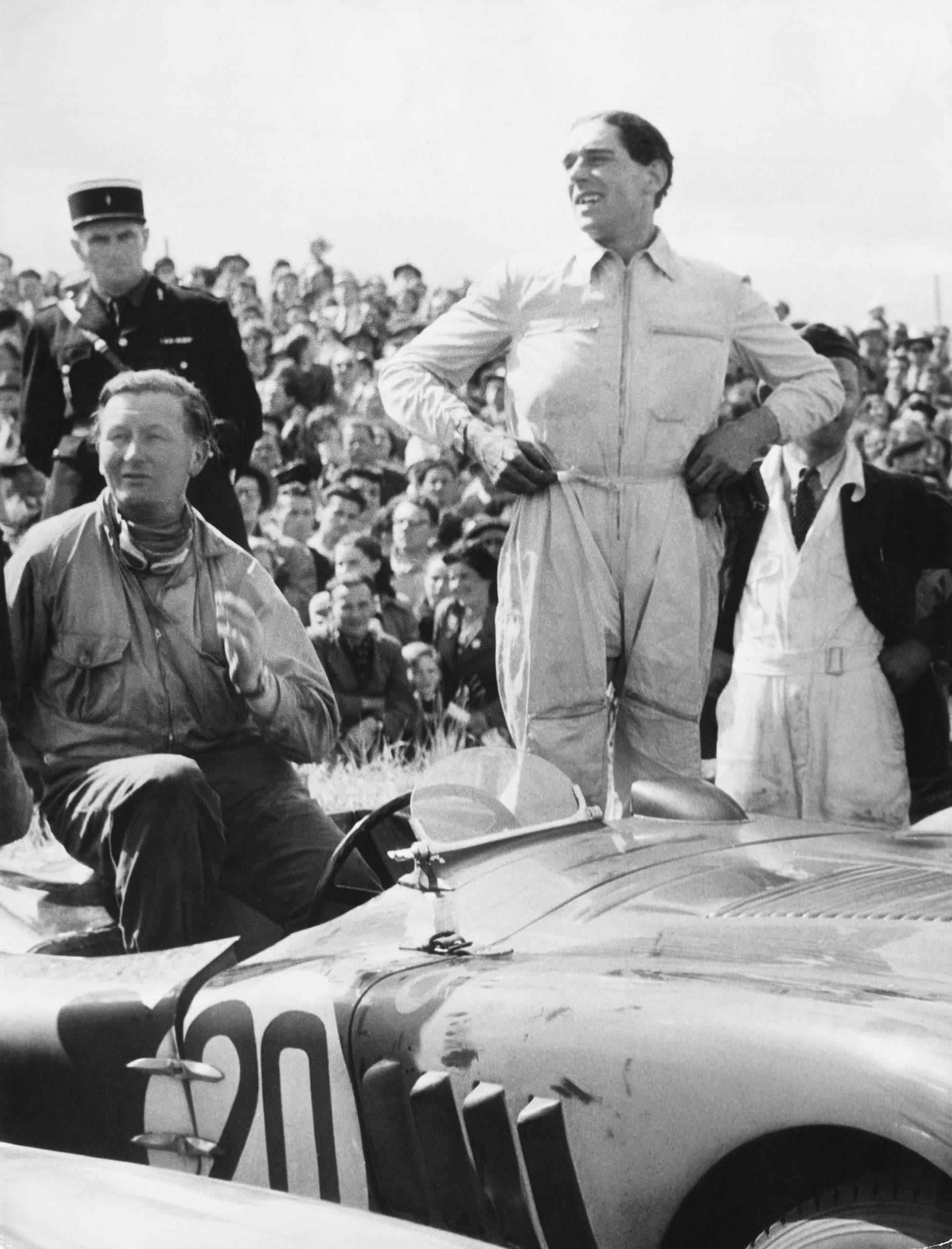 That night was wet and miserable – and the Jaguar’s headlights were one of its lowlights – yet the remaining C-type greeted the dawn with an eight-lap lead.

Peters Whitehead and Walker – Yorkshiremen born fewer than 10 miles apart, in Menston and Huby respectively – had continued to wear down opposition that included a Talbot co-driven by Juan Manuel Fangio and heroic 1950 winner Louis Rosier – plus nine Ferraris and a fleet of Chrysler V8-engined Cunninghams.

The latter’s prodigiously well-stocked transatlantic operation had served to emphasise the necessary Austerity of Jaguar’s – and should highlight the difficulties facing over-reaching, underfunded British Racing Motors in its bespoke endeavours elsewhere.

Raymond Mays – surely the prototypical sponsorship-finder – had worked wonders to persuade a ruminative British industry that his GP car was worth investing in.

Oddly he showed simultaneously that it could be done and how not to do it. Valuable lessons both.

He had also spotted Moss’s potential – honed in svelte Jaguars, spindly Formula 3 Kiefts and up-and-at-’em Formula 2 HWMs – and invited him to a test.

Mays got more than he bargained for. 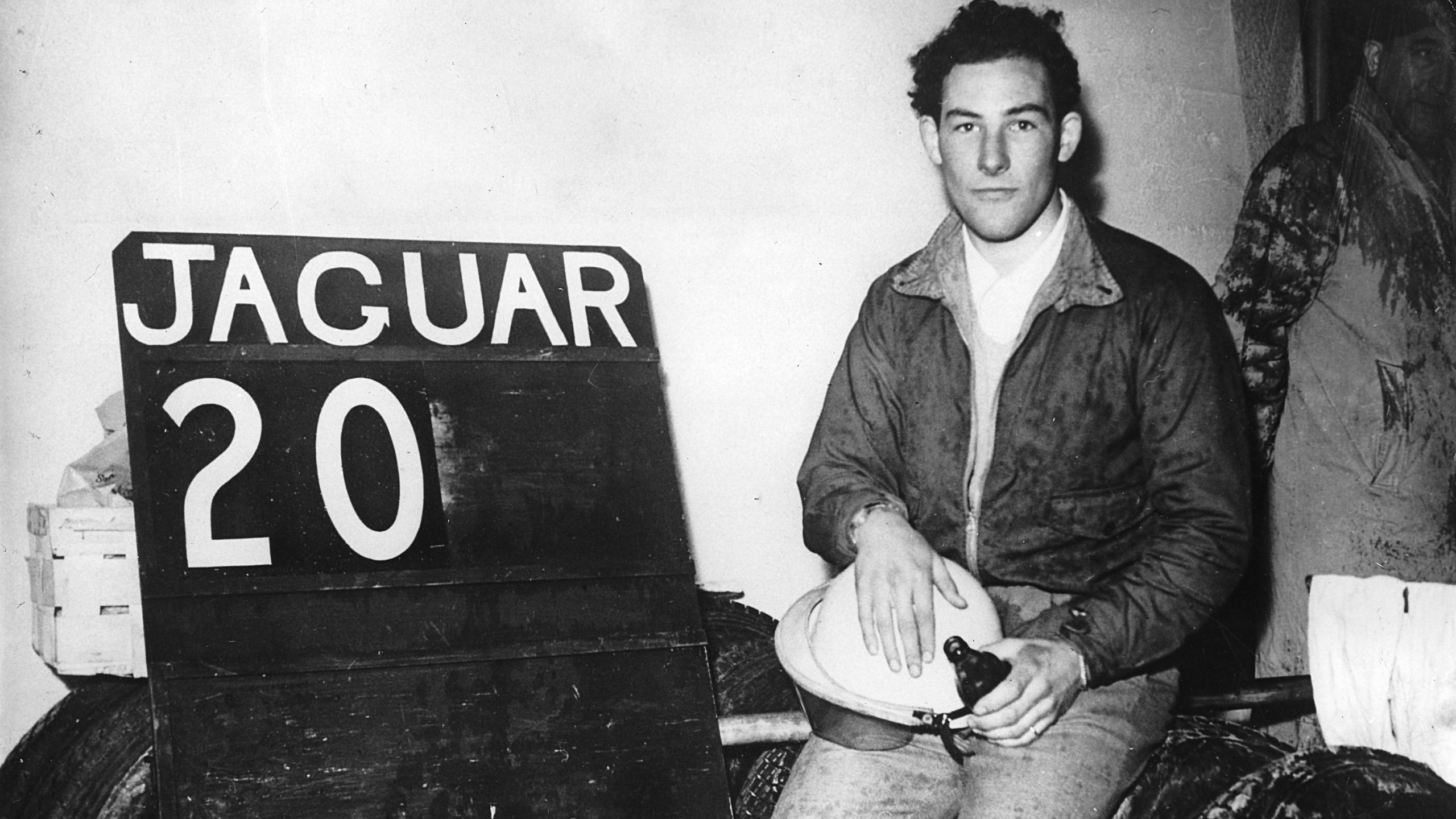 The youthful Moss, here at Le Mans in ’51, immediately identified the BRM’s flaws

Moss, though of course drawn to the V16’s siren’s song, was not blind to the car’s shortcomings. Sadly his complaints – peaky power, spooky steering, cramped cockpit – fell on deaf ears.

Invited to commit them to paper after a long and frustrating test at Monza – BRM’s withdrawal from the Italian GP had been yet another embarrassment – it was too detailed for some to stomach; few suggestions were acted upon.

He was still just ‘The Boy’ in some eyes.

Walker, 17 years Moss’s senior and reckoned by Jaguar team manager ‘Lofty’ England to be Moss’s equal in terms of speed if not application, was rather more sanguine.

Three weeks after winning at Le Mans by nine laps – ahead of the nearest Talbot – Walker was selected alongside Reg Parnell to give the BRM its GP debut at Silverstone.

He finished seventh to Parnell’s fifth, six laps in arrears and in pain, covered by oil and cooked by exhausts. 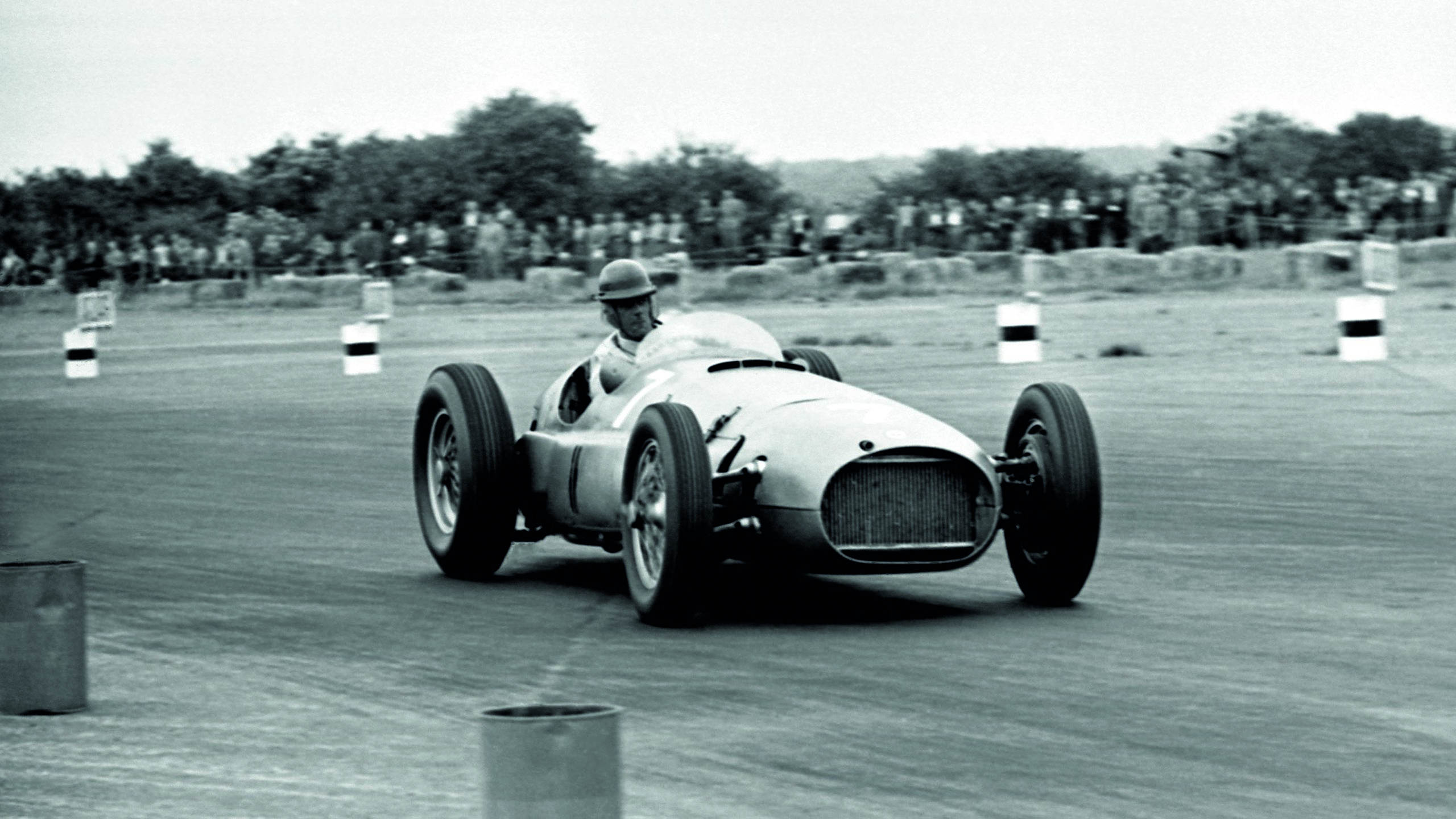 Prior to the GP he had helped Whitehead demonstrate their Le Mans winner, with Moss – still without an F1 drive but a comfortable winner of a support race in the futuristic Kieft – perched perkily on its tail.

He again put pen to paper, this time to say, ‘Thanks, but no thanks.’ 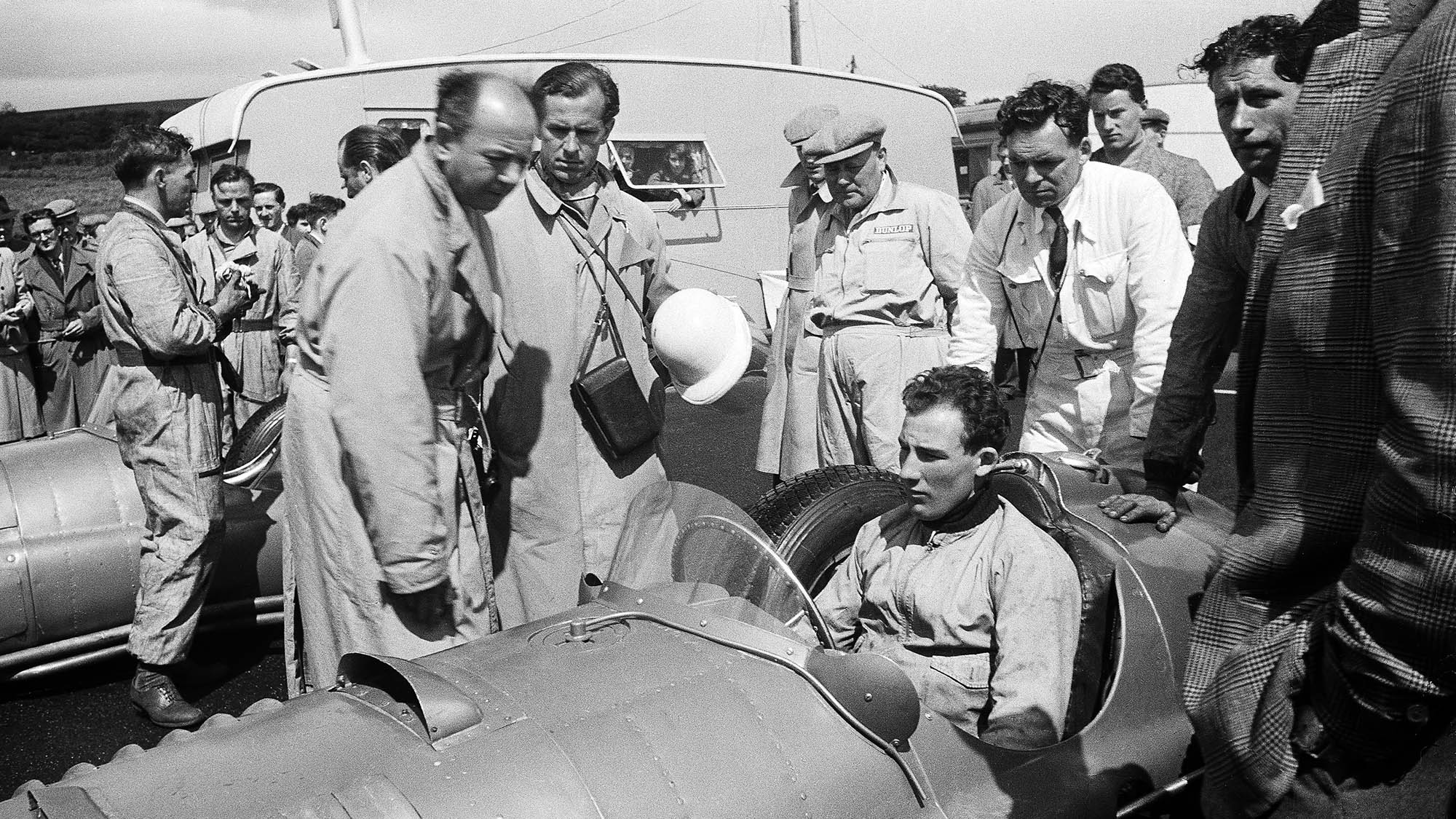 Dundrod drive in the BRM was enough for Moss

He would spend the rest of that season and the whole of the next on a fruitless quest to find a British-made GP winner.

Being ahead of your time can be a double-edged sword. 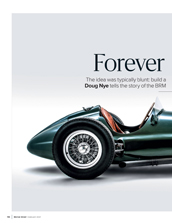 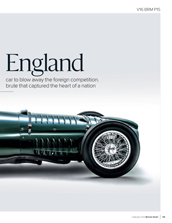 This is far more than just another Grand Prix car. Back in period, ‘The BRM’ was as much part of British national awareness as today’s news of a Covid vaccine.…

But he was surer than ever that that time was coming.

For three weeks after the Ulster Trophy, back behind the wheel of his beloved C-type at Reims, he had scored the first international victory for a car fitted with disc brakes.

Jaguar was pointing the way.

Success in F1 was several levels more difficult – Jaguar wisely steered clear of it (until the ‘green Ferrari’ of 2000-2004) – but the foundations were no different.

British racing motors (sic) now had something to build on at least.