Jenson Button is back in the motor racing spotlight. After a few years of punditry, the 2009 Formula 1 World Champion has his own Extreme E team, as well as big plans for his GT outfit, Jenson Team Rocket RJN

In the latest March 2021 issue of Motor Sport, he describes how the team was formed, his hopes for endurance racing success and the meaning behind the name.

Far from a commercial hotchpotch, it’s a recognition of two key figures in British motor racing.

The team itself is a collaboration between Button and childhood friend Chris Buncombe, whose fathers worked together and also raced.

The pair both karted at the same time; Button supported by his father John Button who became so involved that he set up his own team, Rocket Motorsport.

Buncombe spent some of his karting career with the team and the name continued until 2000, when John wanted to follow his son around the world with F1, and shut down the business.

“Karting is where all this actually started,” Button told Motor Sport. “A lot of drivers of a certain vintage will know Rocket Motorsport from the karting days, because the old saying was that most either had one of the Rocket engines or got beaten by one!

“It’s really nice to be able to bring the Rocket name back – it feels like keeping a bit of family tradition going. A lot of drivers like seeing it back and some have commented to me that it reminds them of their karting days and stirs up old memories, so it’s a nice thing to do.”

When Button’s F1 career was over, the pair raced in the Baja 1000, an adventure that proved to be more testing than they imagined, when they were left stranded for 17 days.

Without any commitments in 2000, they formed their own team, teaming up with Bob Neville or, to use his full name, Robert James Neville.

His initials were already in use by his racing team: the RJN outfit was formed in 2000, running in national and international GT championships. 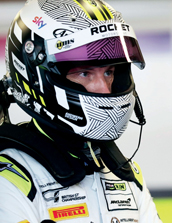 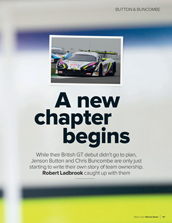 A decade is a long time to wait for a 14th place at Silverstone. Especially if you’re a Formula 1 world champion and have a Le Mans 24 Hours class…

Neville remains in charge of the day-to-day operation of the team, and his initials remain as part of the team name.

“Everything goes through Bob,” says Button. “We’d be nowhere without Bob.”

The team’s first British GT season saw it in championship contention, and there was a final race cameo by Button and Buncombe in a second car.

This year brings a DTM campaign, with more ambitious plans to come. Button reveals more about his plans to carry the Rocket RJN name to success in international racing in the March 2021 issue of Motor Sport.