In the current issue of Motor Sport our editor-in-chief Nigel Roebuck writes about why he considers the 1967 Le Mans 24 Hours the greatest race to take place at La Sarthe. Nigel and the late, great French racing writer Jabby Crombac agreed that the 1967 running of the 24 Hours deserves this title because it featured many top Formula 1 and American USAC drivers plus factory teams from Ferrari, Ford, Chaparral, Lola, Mirage, Porsche and Matra. The ‘67 24 Hours was won – dominated in fact – by the 7-litre Ford Mk IV driven by Dan Gurney and AJ Foyt who led almost all the way and won by three laps over the remaining factory Ferrari P4 driven by Mike Parkes and Ludovico Scarfiotti. 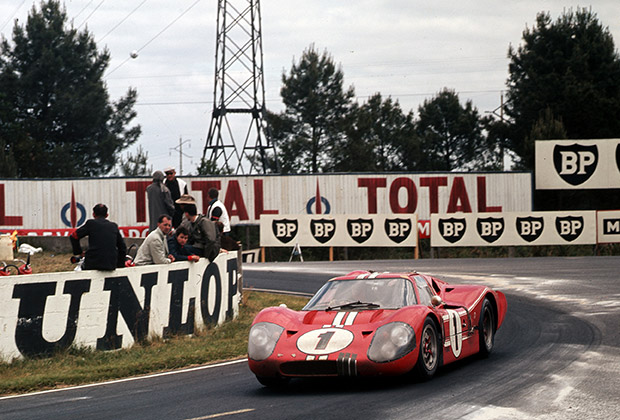 In those days Gurney was a top-ranked F1 and sports car racer and Le Mans ‘67 was his 10th start in the race. Gurney was paired with that year’s Indy 500 winner AJ Foyt in one of the new 7-litre Ford Mk IVs entered by Carroll Shelby and running on Goodyear tyres. Gurney and Foyt were two of the world’s fastest drivers but Foyt was a rookie at Le Mans and despite Dan’s many successes in European sports car racing, which included finishing fourth overall and winning the GT class at Le Mans in 1964 co-driving a Shelby Cobra Coupe with Bob Bondurant, neither was acknowledged by the European press as long-distance experts. In fact many European pundits claimed that Gurney and Foyt were American leadfoots who were incapable of conquering Le Mans.

“The idea that we were voted the least likely to succeed was even more of a reason to develop our strategy,” Gurney remarked. “I actually said, ‘I’m not going to run this car hard.’ The 1967 race was my 10th attempt, and I think for the first time we went at it as though it was an endurance contest as opposed to a race.”

Gurney’s approach was based on gentleman racer Briggs Cunningham’s successful strategy, on the lessons he had learned in Shelby’s Cobra GT cars, and on the characteristics of the Mk IV Ford. “The biggest Achilles Heel was the fact that the car was heavy,” Dan observed. “We were told it was over 3000lbs, although the spec sheet said it weighed 2600lbs. It made almost 500 horsepower and would go over 210mph on the Mulsanne Straight and when you came to the 90 degree turn at the end of the straight it took some serious braking. If you took a qualifying or sprint-type of tactic you’d kill the brakes. They’d be gone in an hour and you’d have to replace them. 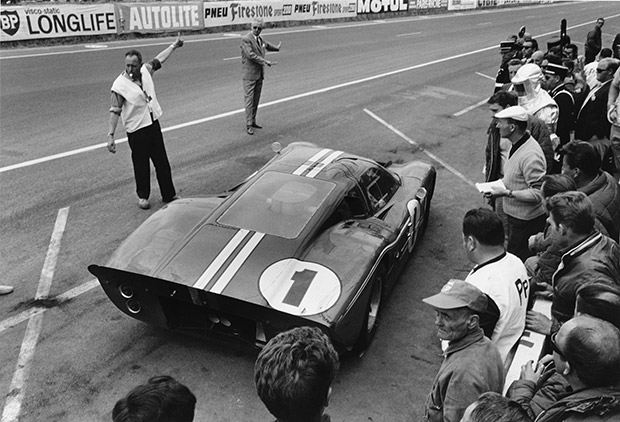 “The only way to help the brakes was to back off, probably more than 50 yards before you should, and let it coast down. I didn’t downshift until the car had scrubbed off maybe 50mph just through air drag. Then I’d put on the brakes and shift normally and go into the turn. That technique was much easier on the brakes.”

Although this was only the second and last time that Gurney shared a car with Foyt he had tremendous respect for the Texan. For all his accomplishments Foyt was a neophyte to long-distance racing, and a rookie at Le Mans, so he freely acceded to Dan’s experience in preparing for the race. “AJ didn’t want to be involved with the set-up,” Gurney said. “He said, ‘You do it.’ So I worked with Ron Butler, our chief mechanic, and the car was fine. I worked on the height of the rear spoiler, which was quite critical. You wanted just enough grip to make it flat through the kink on the straightaway without losing too much straightline speed. Finally, I got it right, just by moving it in smaller and smaller increments.”

Gurney qualified ninth, more than five seconds slower than Bruce McLaren’s Firestone-shod Holman-Moody Mk IV, and finished the opening lap in third place. After the first hour he was up to second behind Australian Paul Hawkins’ Ford. Shortly after handing over to Foyt at the first fuel stop the Texan took the lead. Driving at a pre-determined pace, both of them were running fast but not hard. “The car had a higher top speed than the Ferrari so that even in the draft we would pull away from them a little bit,” Dan said. “We could probably gain 50 feet in the draft. We were running about 212-213mph down the Mulsanne straight. It was pretty good for a race pace in those days.” 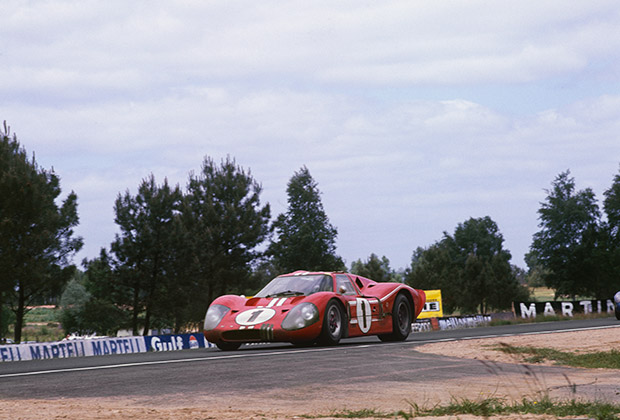 For five hours the high-winged Chaparral 2F driven by Phil Hill/Mike Spence led the chase, running a solid second before problems developed with its automatic transmission. Then Chris Amon’s Ferrari 330P4 blew a tyre and burst into flames, burning to the ground, and the Ford Mk II shared by Denny Hulme and Lloyd Ruby tore a hole in the bottom of its engine.

At half-distance, around four in the morning, disaster struck the Ford team when three of its cars were eliminated in a multi-car accident triggered by Andretti spinning and crashing his Ford after leaving the pits with a new set of incorrectly installed brake pads. Jo Schlesser and Roger McCluskey were following Andretti closely in two more Fords and had to take avoiding action, both of them spinning into the crash barriers. That left Gurney and Foyt with a five-lap cushion over the leading Ferrari P4 driven by Mike Parkes and Ludovico Scarfiotti.

In the middle of Sunday morning there were some worries when the Ford’s roof began to come apart and had to be fixed with duct tape. That aside there were no problems and Foyt finally brought the car home three laps ahead of the Parkes/Scarfiotti Ferrari and 10 laps clear of the third-placed Ferrari P4 driven by Willy Mairesse and Jean ‘Beurlys’ Blaton. The only other surviving Ford, a Mk IV driven by Mark Donohue and Bruce McLaren, finished fourth, 38t laps behind Dan and Foyt.

It was Ford’s second win in a row at Le Mans and the fastest 24 hour race in history. Even today it remains the fourth fastest Le Mans race on record. Gurney and Foyt also managed to win the ‘Index of Thermal Efficiency’, a handicap system designed to favour the smaller-engined French cars. “There was a certain exuberance in realising that after all those attempts I had finally won the thing,” Dan recalls. “It was a special moment because the Ferrari team was very, very strong at that time. So it was a huge success for the Ford Motor Company and for AJ and me. It was the United States against Europe. It was just a terrific feeling and a great moment.” 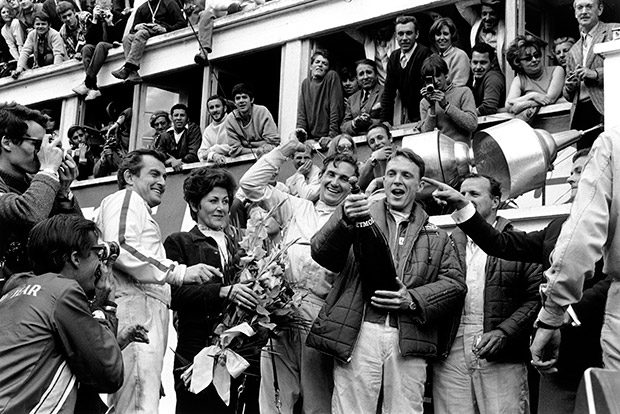 Dan thus started the racing tradition of spraying champagne in victory. “We were up there on the podium and they handed us a magnum of champagne. The photographers down below us were looking expectantly and the whole thing just clicked. I thought, ‘How could they take part in this as well?’ I figured, ‘Why not?’ And I used the champagne like a fire hose to spray the photographers. I think I got Henry and Mrs Ford as well! She didn’t think that was as funny as the rest of us did. It was a spur of the moment thing, one of those things that don’t happen very many times in a lifetime.”

The following weekend Gurney did something no modern Le Mans winner could even think of doing. He won the Belgian Grand Prix at Spa driving his own All American Racers Eagle-Weslake V12. Dan turned some scintillating laps at the end of the race, breaking the track record at more than 148mph and averaging 145.74mph for the 245 mile race. It was the fastest road race in history at the time as he crossed the line more than a minute ahead of Jackie Stewart. Gurney also became the first American driver to win a Grand Prix at the wheel of an American car since Jimmy Murphy won the 1921 French GP with his Duesenberg. In the space of eight days Gurney had carved his name into motor racing’s history books in bold face, achieving a remarkable Le Mans/Formula 1 double that’s unlikely ever to be repeated.