For Mike Conway, the past two Le Mans 24 Hour races have been the case of right team, wrong car.

A three-time runner-up in the endurance classic, overall victory still eludes the Toyota driver who led most of last year’s race before a sensor issue during the 23rd hour cruelly deprived him and his team-mates of a deserved win.

The subsequent pit stop handed the win over to the sister Toyota team of Fernando Alonso, Sébastien Buemi and Kazuki Nakajima.

In this weekend’s final Le Mans appearance for the Toyota TS050 LMP1 car, will this already peculiar year finally be the one in which he secures the elusive victory?

“I thought it was last year!” says Conway. “It’s Le Mans, I’ve done it a few times now and you just have to come in and be as relaxed as you can be, do the best possible job when you’re in the car and the pieces will fall as they may.” 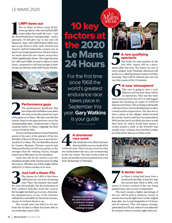 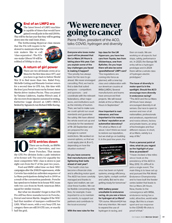 1. LMP1 bows out The Le Mans 24 Hours (Sept 19-20), waves goodbye to the twin-hybrid LMP1 rocket ships that made the race — and the World Endurance Championship —…

This year, he and his Toyota team-mates Kamui Kobayashi and José María López arrive on French soil with a win at the 6 Hours of Spa-Francorchamps under their belts after half a year out of the car.

There were no cobwebs to shake off according to Conway, as the No7 Toyota took the win in Belgium for the first time last month. The team was able to trial new parts ahead of Le Mans and now Conway is hoping that the performance carries over into the penultimate round of the season.

“We feel good,” he told Motor Sport. “I feel like all three of us were straight on it at Spa, no rustiness or anything like that so we all felt good and to get the win there, a little bit unexpected with the penalties we had and so on, to achieve that we did a really good job. Good for the championship, to extend that lead.

“We’ve got a few groups of Toyota fans that follow us around the world. They’ll be with us in spirit but we’ll miss them”

“I’m not really thinking about last year at all, just getting on with it this year and the focus on the championship, not just this race. We know that a good result here could possibly bring you the championship or lose you it.

“[Spa] was our first race with the new low-downforce kit, so we learned a lot from that and we’re still learning with it. I feel like, as this week progresses, we’ll get on top of it a little bit more. It’s always a challenge here and no matter how prepared you are it’s always a tough one.”

A strange one too, with those on the ground having to adapt to the absence of the usual buzz, as grandstands remain empty.

Race organisers, the ACO, had hoped to stage the race with limited fans in attendance but local guidelines and discussions with health authorities ruled that out.

Camps are empty and the hordes of fans are absent. The strange build-up has its pros and cons according to the 37-year-old.

“It’s funny because I was talking to my team-mates earlier, when the campsites are full during the race, you go down the back straight and you smell what’s cooking at the campsite so this year there’s going to be none of that. This year, the atmosphere hasn’t just changed in the paddock but maybe I won’t be getting as hungry at the end of my stint now.

“There’s a few groups of fans, some of the Dutch fans, they come in mobs and they’re normally pretty funny. Then we’ve got a few groups of Toyota fans that follow us around the world. There’s a lady that follows us around and is literally at every event – every single race – I don’t know how she does it and she’s always bringing little toys and gifts for us.

“Those little things you take for granted I guess. They’ll be with us in spirit and hopefully on TV and some of that but we’ll miss them, already coming in today, very quiet paddock and normally it builds as the week goes on but obviously that’s not going to happen.”

Teams arrived on Monday but on-track running only commenced today, with practice time cut down from 12 hours in total to 11. The condensed schedule means fans will have plenty to follow from home throughout the compacted weekend.

“To be here on Monday and not be in the car until Thursday, sometimes you think that you should’ve stayed an extra day at home but I mean, what am I really going to do there? Cut the grass one more time?

“Sometimes you’d like more moments to yourself with this race week, sometimes it feels like you have too much time. It’s never the perfect balance but here I feel like we’ve got too much time to be honest! In the end we’re at the race track and it’s the best place in the end.”

Just 16sec separated the two Toyota cars last year after 24 hours of racing, and the cars will be pushing each other throughout the race once more, says Conway.

This year, the Rebellion cars will also be in the equation with two cars rather than the usual solitary entry by the team throughout the WEC season.

Rebellion team has already taken two wins in Shanghai and Texas, and Conway says that Toyota can’t ignore the challenge, even though there are none of the success handicaps at Le Mans, which hampered Toyota in those defeats.

“We have a bit more weight than we did last year, [Rebellion] had the second-best average speeds, splitting the two Toyotas last year in terms of pace. We can’t count them out, they’re going to be right there. We’ve got to execute on both sides of the garage and see how it goes.”

If all does go to plan, are there plans for a socially-distanced celebration? Not quite.

“Normally we go and celebrate and it’s like we’ll do a spur of the moment thing. We didn’t want to put anything in place. Better not to plan anything. Even last year, I went out with Kamui, had a good night in Paris, had some good dinner and a good laugh after, and it was pretty funny.

“Sometimes the last-minute ones are the best. We’ll see what happens.”

Of course, it won’t just be victory at Le Mans that is at stake this weekend, with the season nearing its end in what will be the last hurrah of the LMP1 cars.

Conway is not only hoping for a first win in La Sarthe, but a WEC title as well, and he and his team have put themselves in the best spot to do so with two races remaining.

With 137 points and the lead of the championship over the sister Toyota, the No7 car is the one with it all to lose over Saturday and Sunday. Victory for either car would secure three wins in a row for the Japanese manufacturer at Le Mans.

“We’d love to do three-in-a-row for the team, it would be quite a special one. It’s never easy to win these things. The double-effect, it’s not just a big race but there’s the championship to think about as well. It makes things different. Obviously we want a good result not just for the race but for the championship.

“It would be a great team effort if we could. Fingers-crossed.”