Le Mans has plenty of incredible tales to tell: Luigi Chinetti’s 23-hour stint en route to victory; Duncan Hamilton staying up all night, taking a bird to the face then winning in 1953, Louis Rosier basically combining both the previous feats in 1950; and Johnny Herbert’s draining stint through searing pain to claim Mazda’s famous triumph in ’91 – these all stand the test of time as true Le Mans heroics.

However, perhaps topping the above was the incredible feat of Frédéric Sausset, who became the first quadruple amputee to finish, entering in the ‘Garage 56’ category for new and innovative cars in an adapted Morgan LMP2 car.

Now, driver-turned-team boss Sausset has a new dream, to finish Le Mans with a team made up of disabled drivers once again in the innovative category. This weekend at Le Mans two of his Association SRT41 drivers will be paraplegic: former Japanese Superbike rider Takuma Aoki and Belgian racer Nigel Bailly.

Bailly made a remarkable return to racing just weeks after a life changing accident, then went from racing Renault Clios to endurance machinery in just two years. 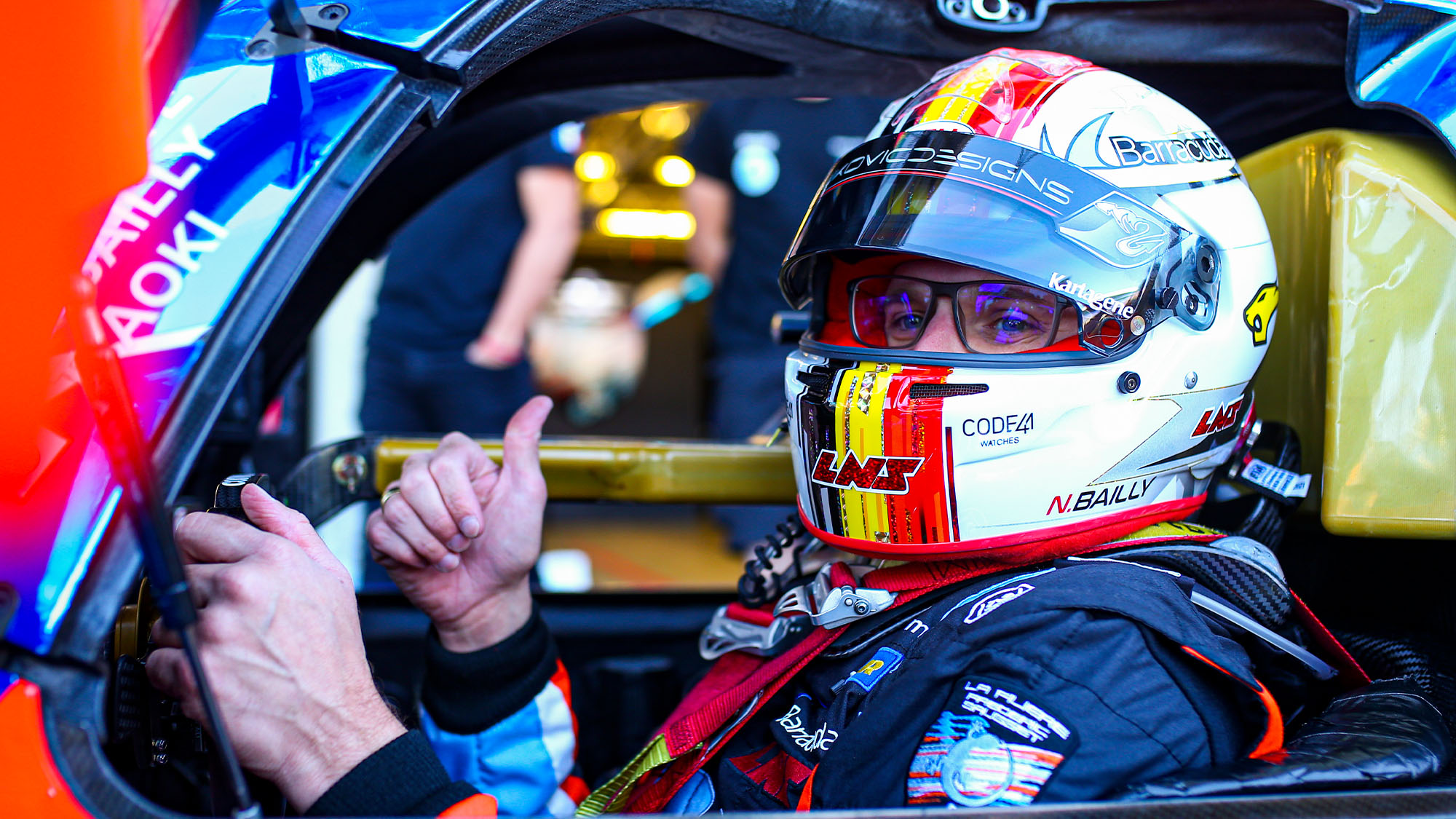 Talking to Motor Sport about the fearsome physical and mental challenge of sports cars biggest race, the Belgian said: “We all have a story to write.”

Bailly started out as a promising off-road bike racer, with dreams of a professional career.

“I started when I was six,” he told us. “So my goal was to go higher in motocross.”

However, he was soon stopped in his tyre tracks. An accident caused devastating damage to his spine, meaning he would never walk again. It looked like his sporting aspirations had been shattered.

This is where the story becomes truly remarkable. Bailly showed almost no hesitation. Within weeks of being told he would forever be bound to a wheelchair, Bailly was racing again.

“I switched over straightaway [to a hand-throttle control kart],” he says. “I knew that it was possible for me to recreate some adventure with an engine.”

The 31-year old didn’t want his disability to define the type of sport he took part in.

“I always wanted to practice sports which didn’t require a wheelchair,” he says. “That was my goal. I never wanted to play basketball, tennis or ping pong. I wanted to compete as an able-bodied guy.”

Bailly’s rise to Le Mans has been meteoric. It’s hard to believe that his first car race was just four years ago in rather more humble beginnings.

“I just started racing 2017 after just doing go-karts and track days before,” he tells us. “My first race was in Spa-Francorchamps in the Clio Cup. Before then, I’d just done a few track days at the same circuit.” 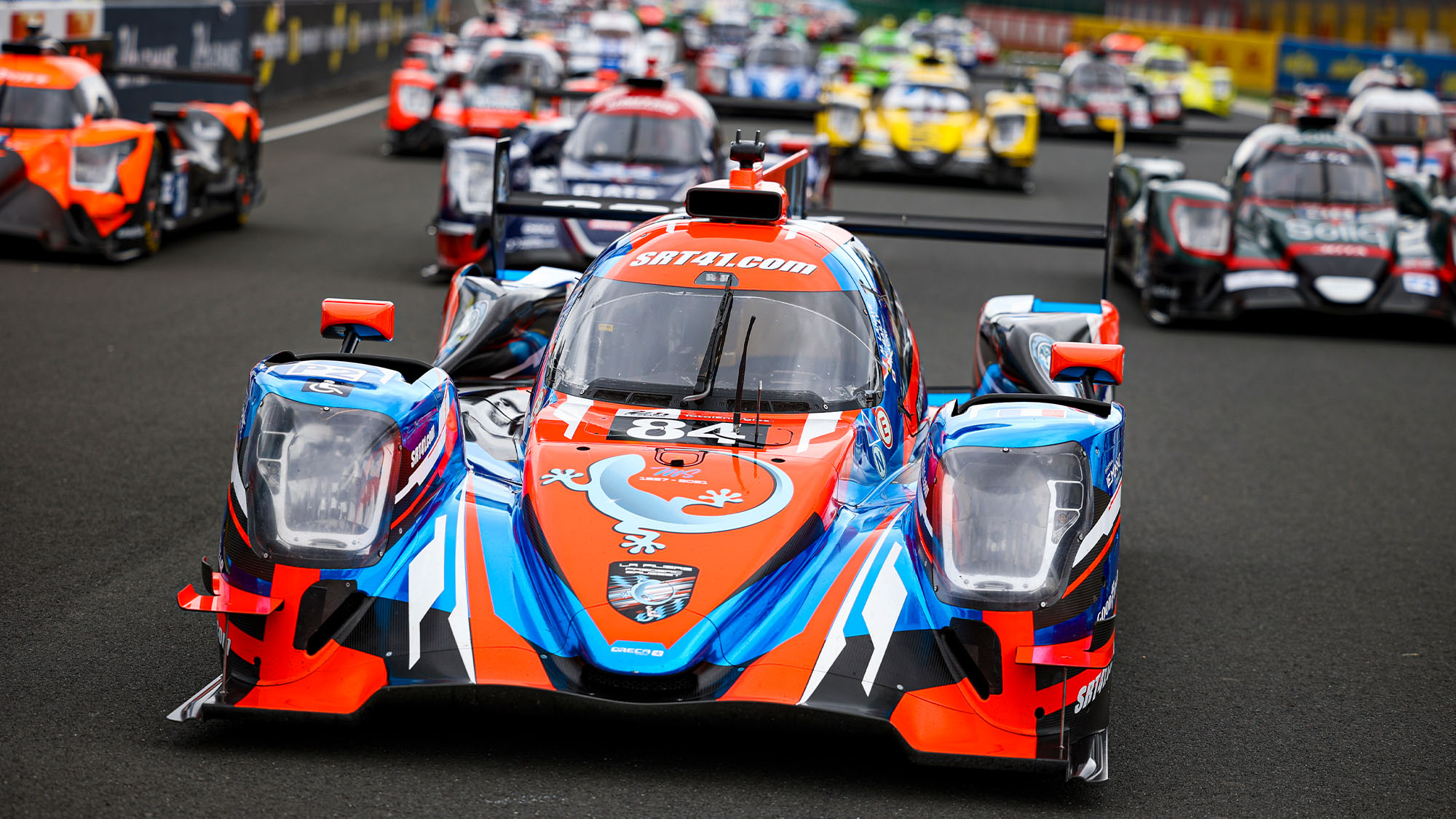 Competing in an adapted hand control car for the Renault hatchback class at the Spa Six Hours, Bailly surprised even himself by finishing fourth in his segment. He’d already surpassed his original goal set when he got back on track.

“My biggest dream was to just race – even at a small level like that, that was OK for me,” he explains. “I didn’t expect to go higher than that. I had no idea what level I was at, or if I could even improve on that.”

Soon though, Bailly was catapulted to a stage that, despite his clear determination, even he couldn’t have even dreamt of.

“Later in 2017, I heard Frédéric Sausset was looking for disabled drivers for a Le Mans team. I thought ‘Why don’t I apply? I’ve got nothing to lose!’

“I attended a test at Paul Ricard, and then in 2018 heard from Frédéric that I was part of the game!

“I was surprised because I was not the best one on the track, but was one of the two guys who was able to apply what they asked of us. Some of the drivers didn’t.”

This ability to take on information meant Bailly would be lining up for the 2020 Le Mans 24 Hours. Joining him were to be the aforementioned Aoki and Snoussi Ben Moussa, in the first all-disabled team to ever enter Le Mans. 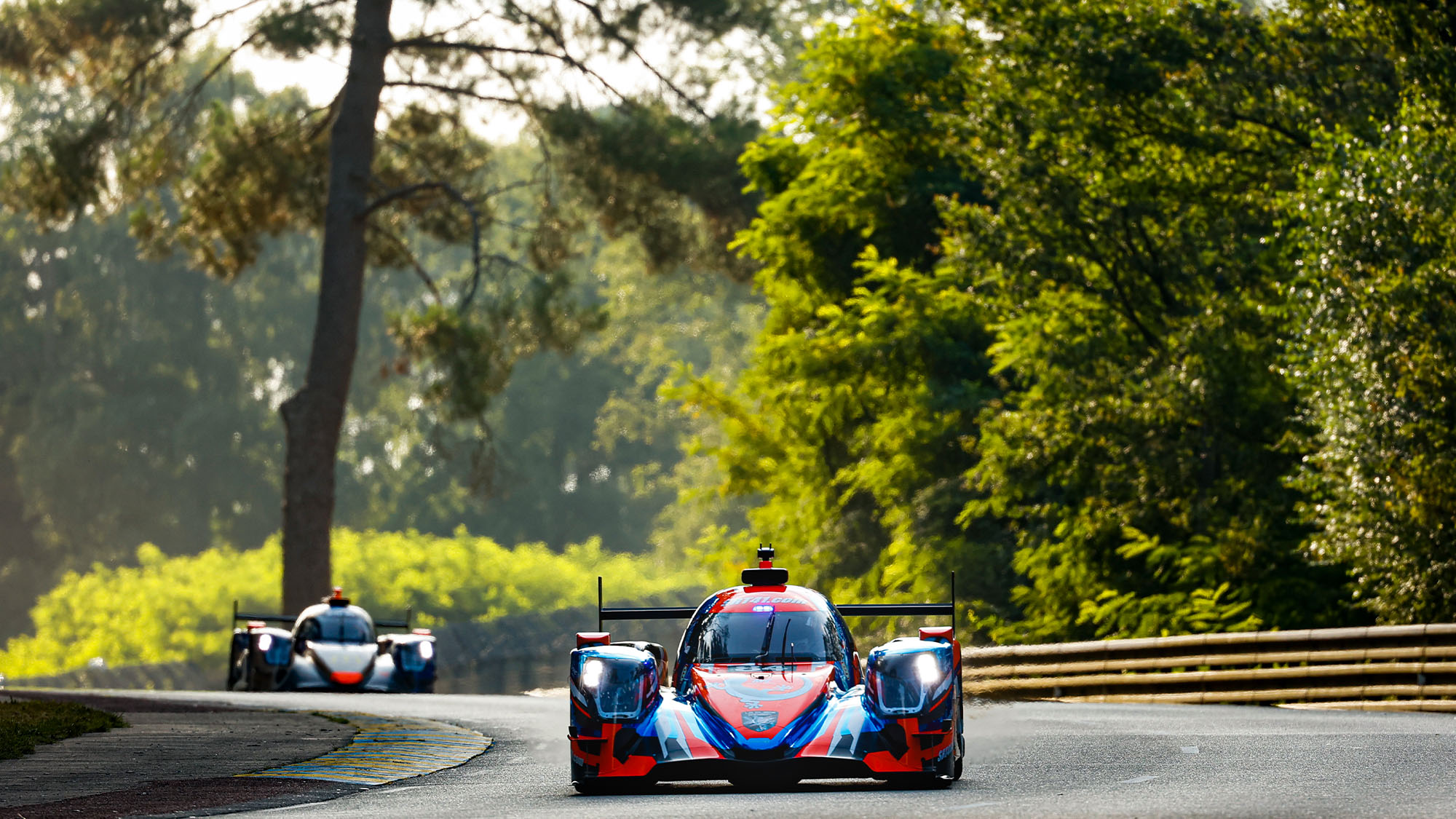 To prepare, the squad dipped its toe in the water first with adapted LMP3 machinery, participating in the V de V Endurance championship, Ultimate Cup series and Michelin Le Mans Cup over the next two seasons.

Such was the daunting task, Bailly had to focus on what was directly ahead of him – as he explains, a Ligier PS J3 is a bit of a step up from a Renault Clio.

“The two seasons with the LMP3 cars were insane!” he exclaims. “The first time it was quite difficult, because the prototype was a perfectly unknown car for us at the beginning.

“But we didn’t crash, we finished all the races, which was the most important thing.

“I never used to think about Le Mans until a month, maybe two months before the race, because in 2018 and 2019 the goal was to learn and improve our skills in LMP3 cars, to go step by step.

“When we went to LMP2 cars, you start to think about Le Mans, because it’s closer than further. From that point, you have to face it. You have to forget about the LMP3, you have to learn again. It’s a big, big change.”

Also competing in the 2019 Road to Le Mans event, the new crew acquitted themselves well on the full La Sarthe circuit, with things looking good for Le Mans 2020.

Then Covid hit, and the team was withdrawn in light of not being able to continue its preparation programme in full.

With the support of the FIA, the team is back, ready and primed with its specially adapted Oreca-07 Gibson in 2021. However the team will have one able bodied driver in the team, Le Mans veteran Mathieu Lahaye.

The machine might seem like beast to someone who was racing hatchbacks but a few years ago, but the manufacturer has done its utmost to make the cars pliable for Bailly and co.

“Oreca are very smart guys,” Bailley enthuses. “They understood what we needed to make a car useable for race drivers with disabilities.

“We have the throttle behind the steering on the left, then on the right side you have a clutch from an LMP1 Rebellion car. Above that you have a paddle which you use for both the up-shifts.” 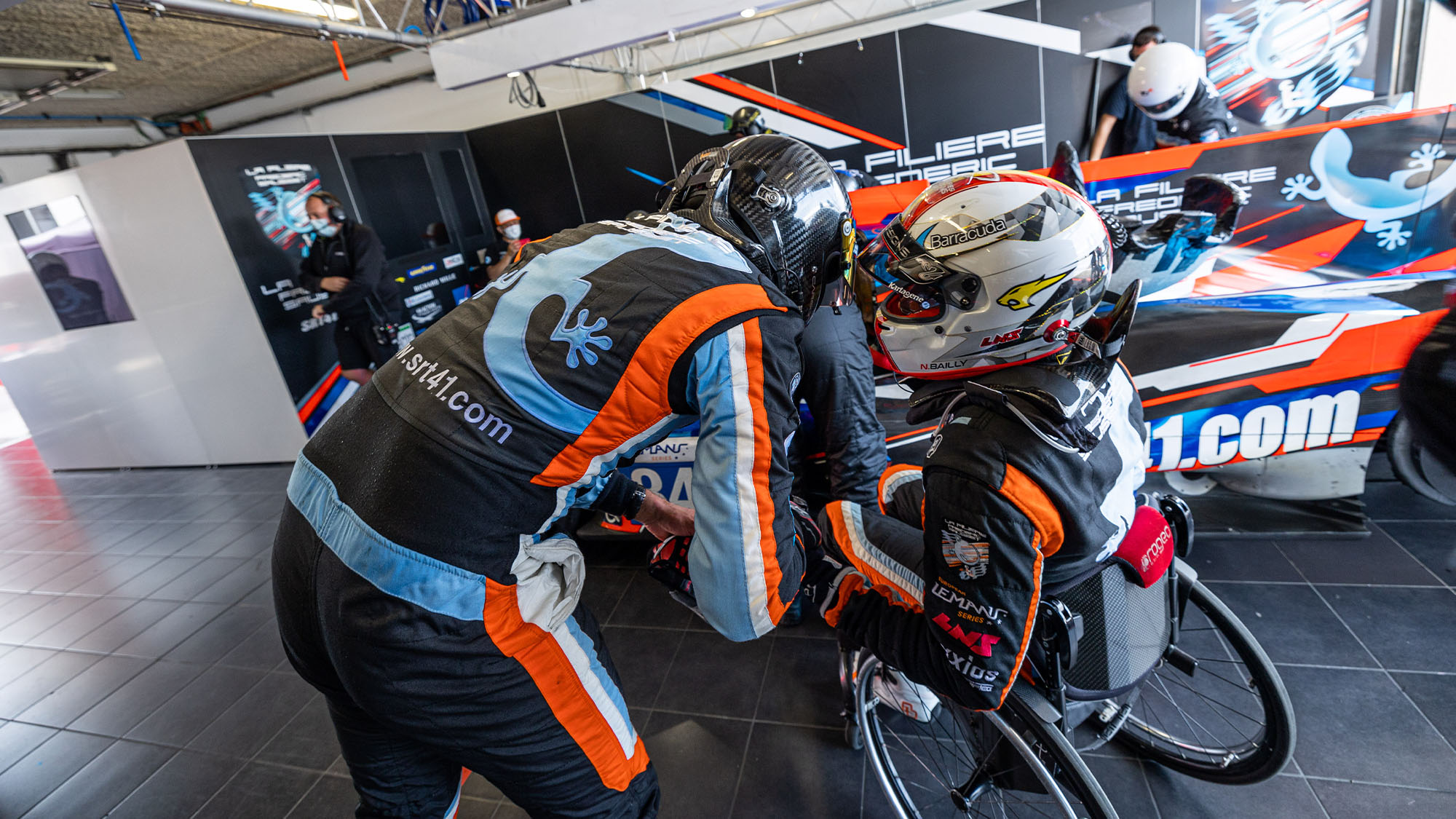 Lahaye, will have a standard pedal arrangement which he can use to brake with, but it’s the stopping system for Bailly and Aoki in which lies the real challenge.

“We have the brake on the right, which is a stick which you push, and also has a downshift button on top of the stick,” he explains.

“Using the wheel with only one hand – that’s our main problem. You have to be very gentle on the throttle to vote, because if the cars oversteers it can very difficult to correct it.

“I’ve been working out for three years now, but would say that we’re still not prepared enough. The car is very demanding. It’s quite difficult to know right now if our bodies are going to last 24 hours.

“But I think it should be OK, because Le Mans isn’t as physical compared to Barcelona where we raced earlier this season. Le Mans is more demanding in terms of mental strength.”

Despite the daunting challenge ahead, the SRT41 team set a more than respectable time in testing, besting three other LMP2 cars, of which there are 25 in total.

Looking at his chances amongst the grid Bailly is realistic, but there’s still a steely resilience to what he says, understanding the significance of his undertaking.

I’m not and will never been the best one – of course,” he admits. “But we all have a story to write, and to tell as well.

“The main goal is to finish race without crashing, without annoying some other drivers, because we know that we’re going to be slower than them.’ 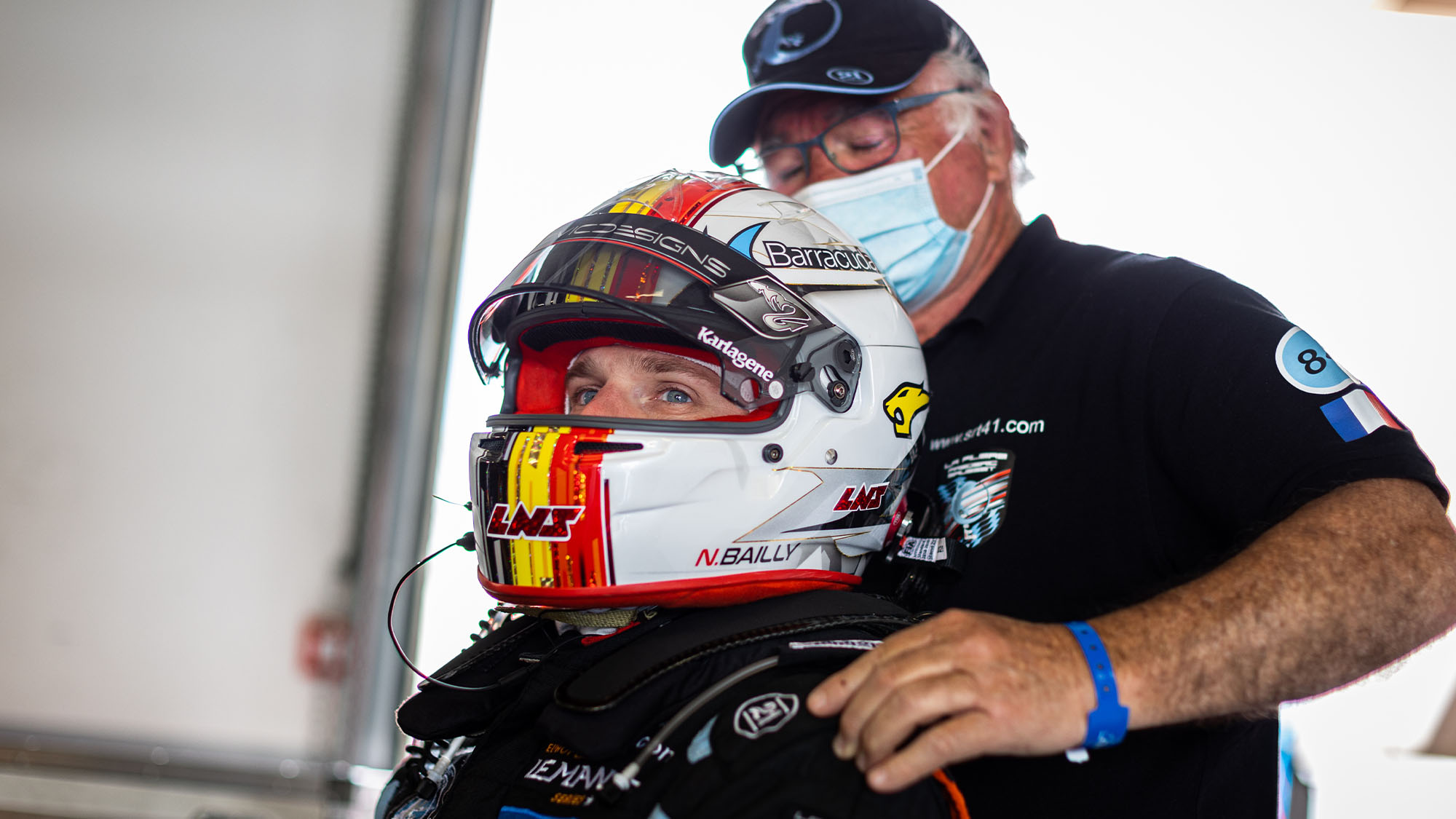 Despite undergoing intensive training, Bailly says he’s still unsure whether his body will be able to withstand a 24-hour race

With less experience of driving the LMP2 car than many of his competitors, and furthermore ones who don’t have to take their hands off the wheel, it’s understandable that the team might be expected to struggle against other fellow category cars. However, it’s not behind the wheel that Bailly believes he and his team-mates might lose speed.

“The pilot changing is going to be way slower for us – that’s our weakness,” he says. “We’re not going to look for the last second per lap, we know that we’re going to be slower than professionals. But we can be as fast as a gentleman driver for example– we know that. With good strategy, we might not be the slowest car out there.”

As a trailblazer in motor sport, Bailly and has a vision for the influence him and his team-mates success might have.

“All we have been trying to do is to remove the stereotype of guys with disabilities racing,” he says. “I’m hoping in the future disabled people can race in the ‘normal’ class, but we’ll have to see how the evolution of the sport goes. Myself and Aoki, we’re the only two disabled drivers in racing. We’re doing this with the help of the FIA, but we have to stay humble.”

Beyond Le Mans this year, Bailly has quite a clear idea of where he sees himself racing in the future.

“I will say everything is possible in future. I hope to race GT3s after prototypes because for us, you can feel the car more, the way the car is set-up is easier to get in and out of. But for now, we’re focusing on 2021.