Toyota’s Hypercars set the pace in the Hyperpole final qualifying session for this year’s Le Mans 24 Hours, locking out the first two places on the grid for this weekend’s race.

Kamui Kobayashi claimed pole in the No7 Toyota, 0.295sec ahead of Brendon Hartley in the No8 car, with the team starting as firm favourites to take a fourth successive victory.

Behind the frontrunners, Alpine and Glickenhaus battled to be best of the Hypercar rest. Just seven hundredths of a second split third-placed Nicolas Lapierre’s Alpine and Olivier Pla in the No708 Glickenhaus.

Daniel Serra was hoping for pole in GTE Pro in his AF Corse Ferrari after initially going fastest of the GT cars but couldn’t beat the Porsche 911 of Dries Vanthoor.

Julien Andlauer will be the first of the GTE Am cars, leading a trio of Porsche 911s in the No88 Dempsey-Proton. His team-mate includes the oldest competitor: 75-year-old Dominique Bastien.

“To get the first Hypercar pole position is great,” said Kobayashi. “We came here with our new GR010 Hybrid for the first time and we have been constantly making adjustments to improve it.

“The team did a fantastic job to prepare a car which can achieve that lap time. I could have gone even quicker but I had a track limits penalty which was a pity. To be fastest on one lap isn’t enough; we have focused on preparing our car to be successful in the race. We’ve had a few pole positions here on our car over the last years and not won the race so we know this is no guarantee. The 24 hours are long and we always need a bit of luck.” 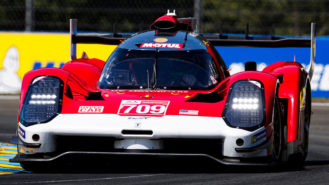 A combination of Le Mans-winning expertise, a car designed for the track and a true indy spirit could take Glickenhaus all the way, says Ryan Briscoe

All five Hypercars and the fastest six from each other category took part in the 30min Hyperpole session to determine the starting order of Saturday’s race.

Kobayashi set the early pace, 1.23sec ahead of the No8 Toyota of Hartley, with the No708 Glickenhaus of Pla trailing by a further 1.342sec. Lapierre’s Alpine was a further 2sec adrift, ahead of Dumas in the No709 Glickenhaus.

But just after the Hypercars set their first times, battle was paused as Kevin Estre went off in his No92 Porsche, ending his hopes of qualifying fastest of the GTE Pro runners.

There were just over 22min left on the clock when the session restarted and Hartley set about chasing the pole time, closing the gap to 0.295 sec. Kobayashi looked to have more in reserve, but dived into the pits as he appeared to be setting a faster lap, after exceeding track limits.

Da Costa moved to the front of the LMP2 class for Jota but found himself trading paces with the rapid Louis Deletraz for class pole.

WEC LMP2 championship leaders, United Autosports were less successful, however. Nicolas Jamin spent several minutes in the pits, while Paul DiResta was another one of many to have a lap deleted for exceeding track limits and stopped in the pits with 9min to go, at the back of the LMP2 pack, later explaining that the car had an issue.

By this time, with Toyotas were also stopped, with a 1.67sec gap over the Alpine, with Pla’s lead Glickenhaus, still pushing out on track but ultimately unable to improve his position. 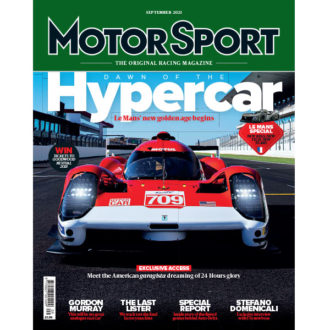