There have been many factory teams that have entered Le Mans and won to much fanfare and publicity; there have also been many independent teams known to take on the enduro and find cult status in doing so, some achieving the greatest success in endurance racing.

However, no team, either big or small, has ever gone about publicising its La Sarthe assault quite like Scuderia Cameron Glickenhaus.

Looking destined to be the only privateer Hypercar at Le Mans in the near future, the team appears to have every intent of shaking up the order against the established manufacturers, and this extends to its publicity.

“The public loves seeing this stuff. What do we have to hide?”

Glickenhaus, on the other hand, is going in quite the opposite direction, showing warts, nuts, bolts, carbon-fibre shards and all to the world via Twitter, as it quite openly documents the development of its SCG007 Hypercar from the ground up.

The team really is taking its fans along for the journey with it, every step of the way.

However, this isn’t some amateur operation run out of a lockup garage – Glickenhaus has signed up some highly capable partners; Italy based Podium Advanced Technology is building the cars (which also constructed the 003 and 004 racecars), with French firm Pipo Moteur developing the engine and Sauber Engineering designing the aerodynamics. Lubricant company Motul is a partner and the operational side of things will be augmented by endurance racing stalwarts Joest.

The idea of showing every intricate detail of a car’s build would have been an anathema to the likes of Audi or Porsche, but Hypercar presents a different landscape as the class is subject to a Balance of Performance (BoP) formula. “The public loves seeing this stuff,” says Glickenhaus. “What do we have to hide? In a BoP race like Hypercar, everyone knows what they have to do, they know the aerodynamic ratio, what the weight has to be and the horsepower.” 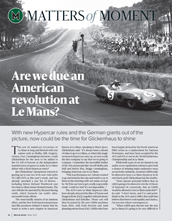 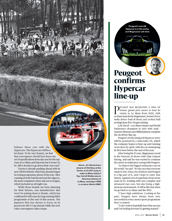 Glickenhaus Hypercar: Are we due an American revolution at Le Mans?

The list of American successes at Le Mans is long and littered with star names such as Shelby, Hill, Gregory, Gurney, Foyt, Cunningham and more. Could Glickenhaus be the next…

This attitude is refreshing in a world so often shrouded in secrecy. Even a crash at testing in Vallelunga earlier this month, which Glickenhaus says was simply down to driver overconfidence on cold tires, was immediately published on various social media channels. Contrast this to Peugeot’s approach back in 2011 when it flat out denied the occurrence of a huge off for Nicolas Minassian during testing at Paul Ricard.

So what has this open approach to development shown us? First, it highlights just how open the aerodynamic regulations – in terms of the features allowed on a car – are compared to LMP1. The point being that the aerodynamic targets set in the BoP are quite easily achievable, Glickenhaus going so far as to say, “from the beginning, I set out to make as beautiful a car as I could. I fought a lot with Sauber to keep the car beautiful, but I’m not stupid, it had to meet the regulations and have the best-allowed aero. But to be honest, it’s about the same as an LMP2, we could have taken an 003C, put a [different] engine in it and call it a Hypercar, it would have been fine.”

“I fought a lot with Sauber to keep the car beautiful”

This freedom is most apparent when one looks at the 007’s rear wing, which features a series of vertical fins, more akin to those seen on WRC machines than sportscars. These are effectively flow-control devices; in the case of a rally car they aid stability at high yaw angles, and their effect is likely similar in this application. The aero regulations specify a degree of yaw stability which Toyota and Glickenhaus hoped they could meet without the need for a dorsal fin. However, both eventually deemed a fin necessary.

007 went off on outlap. Everyone's fine. No issue with car. Major Tom performed perfectly in shearing/shearing damage. We'll continuing improving him and be back testing on schedule. It's only rock and roll but we like it. pic.twitter.com/2tpVIT6t3G

The front underwing, floor sides and rear diffuser also hint at the freedoms available, all being considerably more complex and larger than LMP1 rules would have allowed. That said, the 007 is relatively conventional aerodynamically, relying on the underfloor and upper body surfaces to generate downforce, rather than going down the route of directing flow through tunnels in the body.

Looking at the rear of the car, there is evidently plenty of through-body cooling capacity, with a large central outlet and fully open rear arch exits. The cooling package meanwhile sees the engine radiators placed forward in the sidepods, drawing air from the nose, while the charge coolers for the turbochargers are sited just in front of the rear wheels. The exhausts also exit over the rear deck, which will help energise the flow over the upper body, in turn benefitting the diffuser performance.

One has a storied past at Le Mans as the most successful manufacturer in the race's history. The other is a confident American team that's not afraid to speak its…

SCG’s openness also provided a great insight into the Pipo-produced engine, a company better known for powering WRC cars from the likes of Hyundai and MSport. The cylinder head design of the twin-turbocharged, 3.5 litre V8 draws heavily on its WRC experience, with what are in effect a pair of inline four heads mated to a bespoke block (with the engine being Pipo’s first stressed unit). The regulations place an upper limit on power of 671 bhp, but Glickenhaus says the engine has been designed with plenty of headroom above this in case a power increase is needed for BoP purposes. “We have the flexibility to run at 10% over 670bhp, or 20%, in full endurance trim without any stress, so if they need us to run more power, we can. We are also 100kg under the minimum weight, so we have room to move ballast,” he explains (Toyota have already been given a 10kg weight penalty over the 1030kg minimum).

“We’re in unchartered waters, just trying to do our thing”

While BoP is a contentious subject, there is no denying that it will allow for outfits such as SCG to compete on a more even footing with big manufacturers, and also means that there is no need to add layers of expensive technological bells and whistles. For example, under LMP1 rules, a rear wheel drive only car was at a distinct disadvantage compared to an all-wheel drive hybrid, both in terms of corner exit speed and tire degradation. BoP should account for that disparity, allowing Glickenhaus to build what he calls a “simple, basic sportscar, that we understand with an ICE powertrain and traditional gearbox. Something that a human being can look at and fix. Maybe that will give an advantage?” An added bonus of this approach, and SCG’s early start, is that it is effectively the development mule for Michelin’s RWD specification Hypercar tires, which will have to be run by any other competitors going this route, including the LMDh machines due to arrive in 2023.

So far, the package has proved reliable, beyond some fine tuning of areas such as the gearshift, Glickenhaus stating the test car ran several thousand kilometres hassle free. However, he is adamant the car will not compete until it completes a 30-hour endurance test, the running of which is currently proving problematic due to Covid travel restrictions in Europe. On the flip side, this same issue is also being played to the team’s benefit, as the start of the season is pushed further and further into the year, and with it the point where the car has to be homologated (for five years). This gives the team an opportunity to take final testing and development at a more measured pace and, hopefully, ensure the homologated package is the best it can be.

While it would be foolish to bet against Toyota this year, SCG appears to have many of the pieces in place to mount a credible challenge in La Sarthe this summer (or possibly Autumn). It should also come as no surprise given Glickenhaus’s track record, that he has decided to build 24 road going variants of the 007, the SCG007S. “If we get 24 firm orders, we are going to build them and they will be fully road legal,” he reveals. “You can drive them to the track, off load them, set the suspension, add slicks and you will have full access to the same features as the racecar like traction control and ABS.”

Ultimately, Jim Glickenhaus is going to Le Mans for that greatest of reasons, because it’s there. It is a long while since a true privateer has been in serious contention at the sharp end of the grid, but as he sums up. “We’re in uncharted waters and we’re just trying to do our thing, you know?”