Picture the scene – bright mountain light piercing through your windshield as you make turn after turn at the world’s most demanding race circuit, body dehydrated from the physical exertion and your mind exhausted from the mental challenge.

The two-and-a-half-hour double stint felt like it would never end but you finally pull in – it’s over. You feel the sweet relief as you clamber out the car to get your breath back, blink through the stinging sweat and midday sun and collapse into a seat. But before the adrenalin has had time to wear off, you’re nudged towards another pitbox where there’s a different car coming in. A dream? A nightmare? Either way, you’re roaring back out to the Green Hell.

This is the incredible challenge facing Patrick Pilet this weekend at the Nürburgring 24 Hours, where the endurance veteran will be driving not one but two GT3 911s on the fearsome track at arguably the world’s most demanding endurance race. 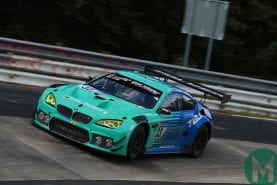 The Nürburgring 24 Hours from the eyes of a driver

“It will be interesting – worst case scenario, I’ll be driving for the 12 hours,” says the Frenchman of his challenge, on a track which he emphasises “Concentration is everything – it’s so demanding.”

The opportunity of taking on this incredible feat came about when Pilet’s Falken Porsche team-mate Lars Kern moved over to Hüber Motorsport.

Falken was left with a free berth, and so simply decided to fill the space with one of its existing drivers – a clear indication of the stock it puts in Pilet.

“It’s pretty nice from them to think about me, to have that confidence,” he says in good humour. “When they asked me I said ‘Okay, why not? Double chance of having a good result!’”

The Frenchman is joined by Jaxon Evans, Sven Müller, and Marco Seefried in the No33 car, whilst the 44 will feature Alessio Picariello, Martin Ragginger and Klaus Bachler.

The latter has completed a similar feat to the one Pilet is attempting last year, giving the enduro veteran confidence he is up to the task. That doesn’t mean the Frenchman is underestimating it though.

“For sure the Nürburgring is very challenging,” he says. “The problem is when it starts to rain and you have mixed conditions, because it asks a lot of your concentration and also your body. It can be really hard.

“Communication will be key. I will speak a lot with my engineer and say, ‘Okay, I can do this, this I cannot,’ just try to be honest with them, because it’s really important here. 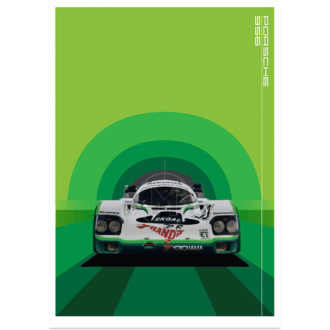 “I will drive for more than 12 hours, but I hope I don’t have to! I did it already in the past at many races like in Spa.

“I don’t know exactly how much I can drive both cars, because for sure there are limits. We might be surprised – if I feel fresh and I feel good, I will drive as much as I can.”

Stints are normally limited to 150min at the Nordschleife, with a minimum two-hour break in between. But with up to four drivers per car, there’s often much more time to recuperate. This year, Pilet knows he’ll be pushed far closer to the limit.

“Normally you have like five hours before you jump back in the car, so you have time to shower to, dinner and rest,” he explains.

“I don’t know exactly how we will manage that [this time]. For sure, I will have less rest. Sleeping will be quite difficult. But there are other races like Le Mans or Spa where you never really sleep – it is really intense. I’m not scared about that. I’ll just try to save my energy until I get to the pitlane.”

Pilet knows that once cocooned inside his 911, his focus must be razor sharp.

“Concentration is everything there – it’s so demanding,” he says.

“Traffic has the biggest speed differential of any race – at Le Mans you have an LMP2 prototype and GT with a difference of about 30km/h, but at the Nürburgring you can have 100km/h, when navigating these car you have to be really aware and address the difference.

“So you have to concentrate on your race with the other GT3 cars, the lapped cars and also focus on the track too – it can change so much. It can be fully dry in some parts, fully wet in other, oil, dirt, many things. 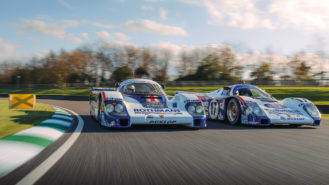 These are none other than the first and last Porsches to win the Le Mans 24 Hours during the legendary Group C era. Not examples of those cars, but the…

“You have to be aware of where the marshals are, all the different flags, it’s very easy to get a penalty.”

In terms of taking on double driving duties though, Pilet doesn’t even believe it’s the physical challenge that’ll be the greatest, as he explains.

“The main difficulty will be jumping from one car to the other, just being able to refresh your mind, that is the worry,” he says.

“Both cars will be very similar, but even if you have exactly the same set-up with the same tyres, there are always small differences – the brakes, the handling, having two different seat positions, even though I have my insert foam.

“Once you’re on track, you have the four kilometres of the GP circuit to get used to it, then it’s time to go.

“We’ll have two race engineers, I know both of them. I think we will do the debriefs a bit more altogether – they’ll need to remind of certain things.”

After winning the event in 2018, Pilet knows what it takes to master the Nürburgring. Now he and his team has the so-called ‘luxury’ of two different approaches.

“You have two cars: one more aggressive, one less, but I think it depends on the [car] performance you have,” he says.

“When you have the performance you don’t have to overly push, but when you are on the limit already [in how much potential has been extracted from the car] then you know you have to give everything every lap.

“Having an ‘easy’ car which works in all conditions is important here, because anything can happen. I won in ’18, but there’s more races I didn’t finish than I did, so I know how it is.

“For sure you cannot run 100 per cent all the time, especially because of the traffic – if you have really tricky conditions there’s a high risk of an incident.

“Our strategy is mainly just to stay with the leading group because if you’re in front at Nürburgring you have a big advantage. If you stay there until the morning, then you can think the win.

“It’s always about judging the right level of aggressivity and the amount of risk you take.”