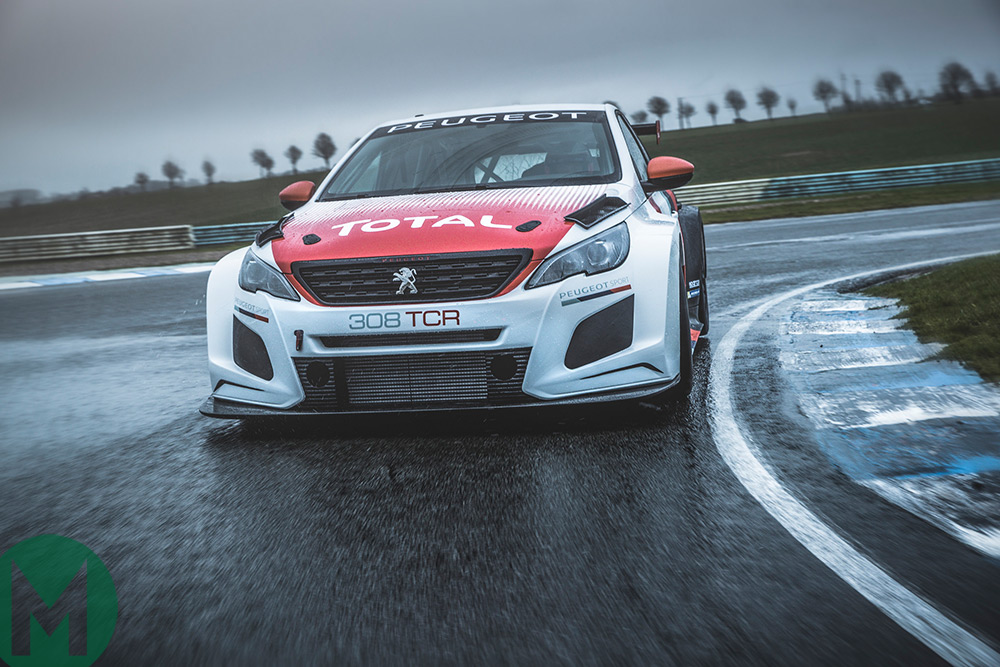 Peugeot has released images of its new 308, derived from the Peugeot 308 GTi, which will enter TCR and the WTCR series in 2018. The car was developed during the one-make Peugeot 308 Racing Cup.

Chassis, engine, gearbox and aerodynamics are built to compete in international touring car categories, such as Germany’s VLN, Spain’s CER, Italy’s CITE, the Belgian BGDC, the 24 Hour Series, and, of course, TCR series and WTCR. Orders open January 3 with the car also featuring at the Geneva Motor Show from March 8-18.

“The Peugeot Sport 308 Racing Cup was already eligible for the TCR, but the rapid development of championships based on TCR regulations inspired us to go further in looking for performance to accompany the ambitions of our customers, all the way up to the very top level – which from 2018 will be represented by the FIA World Touring Car Cup (WTCR),” said Peugeot Sport director Bruno Famin. “So, the arrival of the new Peugeot 308 TCR comes at just the right time, illustrating the deep engagement that Peugeot Sport enjoys with its customers.

“In order to meet [customers’] justified demands, we’ve used our experience and expertise to come up with a car that is competitive, reliable and always increasingly enjoyable to drive.”

Peugeot Citroën Racing shop director Mayeul Tyl added that the car would cost €109,000 pre-tax with a “competitive” cost per kilometre of €4.5.

Touring Car Racing (TCR) began in 2015, its low-cost platform leading to over 600 TCR-spec cars built for 213 races over three years from 16 manufacturers around the world. The TCR International Series itself held 32 events from 2015-17, visiting 20 circuits in 16 countries and attending seven Formula 1 events. After 13 seasons, the World Touring Car Championship adopted TCR regulations as the FIA consolidated the WTCC, TCR International Series and the European Touring Car Cup to form the WTCR Series. Many regional touring car series, such as those in the USA, China, Thailand and Portugal, use TCR regulations, with a UK series – TCR UK – making its debut in 2018.

TCR UK promoter Jonathan Ashman, former FIA Touring Car Commission head, has called the UK series a feeder to the BTCC, not a competitor, while BTCC director Alan Gow brushed off reports of the series’ presence as a threat in 2016 and suggested that TCR UK would not become a support series to the BTCC in the near future.

A few BTCC teams have considered a move to TCR UK, citing the series’ cost-effective business model, while a number of teams will contest both series.