Porsche Motor Sport and Team Penske have announced a deal for the American outfit to run the Stuttgart company’s works LMDh team in both in the World Endurance Championship and IMSA, with the new car making its debut in 2023.

To be known as Porsche Penske Motorsport, the agreement will run for “a number of years” according to a statement from the pair.

The two organisations have long been associated, collaborating previously on the all-conquering Porsche RS Spyder LMP2 car. Penske also ran Porsche’s interests in Can-Am racing, securing back-to-back titles with first George Follmer in a 917/10 in 1972 and then Mark Donohue in the fearsome 917/30 in 1973.

The LMDh car will be based on an LMP2 chassis produced by either Ligier, Oreca, Dallara or Multimatic, but the new partnership is yet to announce which constructor it will use.

Although Penske has had huge amounts of success in IMSA and the American Le Mans series, it has yet to enter the WEC.

Le Mans is the last unconquered frontier for Penske in motorsport, and this announcement signals the realisation of a dream for ‘The Captain’, Roger Penske.

“This is a proud day for our entire Penske organisation,” said Roger Penske in a statement. “We have represented Porsche on the track or in our businesses for more than six decades. The heritage and success we have enjoyed together is unparalleled throughout our history.”

“I can’t wait to get started as we build a global racing program with Porsche that will compete for wins and championships well into the future.” 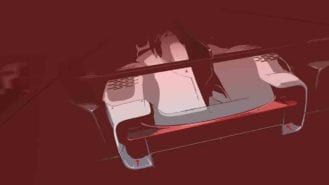 Porsche will be gunning for its 20th victory at La Sarthe, and its head of motor sport Fritz Enzinger emphasised the significance of chasing this milestone with Penske.

“Porsche and Penske share a proven track record of success. This partnership had a lasting impact from 2006 to 2008 on what was then the American Le Mans Series,” he said. “Team Penske has made a name for itself with an almost unparalleled success story in motorsport. In the long list of victories to date, however, the name of ‘Le Mans’ has been missing. I hope that we will finally be able to chalk up this success as of 2023 with Porsche Penske Motorsport. This would then mark Porsche’s 20th overall victory at the Sarthe – a dream come true.”

Porsche also reiterated its commitment to offering its LMDh cars to customers.

Audi has already committed to the LMDh class in both WEC and IMSA. The new LMDh class will run concurrently with the Le Mans Hypercar class, as part of an overall ‘Hypercar’ class. Acura has confirmed its participation in America’s top category, whilst Alpine is also thought to be likely to join the LMDh ranks in WEC eventually, but is running an updated LMP1 chassis this season.