It took four and a half hours of build up, but the fourth round of the World Endurance Championship came to the boil for a thrilling final hour and a half at the Nürburgring.

Porsche’s Mark Webber, Timo Bernhard and Brendon Hartley took a long overdue victory in Porsche number one by the best part of a minute from the Audi R18 of Loïc Duval, the impressive Oliver Jarvis and Lucas di Grassi. The Le Mans podium finishers ran in formation late on with third-placed team-mates André Lotterer and Marcel Fässler, who were without the injured Benoît Tréluyer for the race.

Not only was it the Porsche number one crew’s first win of the season, it was their first meaningful finish, having been battling luck as much as rivals all season. An early slow puncture threw them out of sync in the pit stops, and threatened to knock them out of contention.

Hartley, though, was able to manage it, albeit losing out on the road to the Audis, but a bigger game was in play for him: “I needed to stay out as long as I could with the puncture so we didn’t need to stop again,” he said. Crucially he stayed out long enough, and was able to pit just a few laps earlier than expected.

Toyota’s first outing since that crushing Le Mans will have done nothing to ease the hanging disappointment. Neither trio could keep in touch with Audi and Porsche in the opening stages, falling back so far that Porsche’s Neel Jani could afford a spin and drop no further back than fourth.

Before the race Antony Davidson admitted “we have no idea really about our pace, we haven’t done enough running in these conditions to know.” In the soaking Friday and Saturday they were adrift, in the warm Sunday sunshine they were too. The anticipated bounce-back was more a regression to 2015, finishing laps down on the leaders.

Out front the Audis and Porsches were fantastically well matched and produced a thriller for the 58,000-strong crowd. Gaps stretched and contracted through traffic, but problems appeared to follow the Porsches. First Timo Bernhard ran deep at turn one – an eagle-eyed Wolf Henzler checked his turn in or would have been speared – and early leader Marcel Fässler in the Audi cut back through into the lead.

Jani then spun as the front four came across a close GTE-Pro battle. Dragging alongside the third-placed Jarvis across the start-finish line Jani locked up and tried to slide through a gap between Aston Martin and Ford. Instead he clipped the nose of Harry Tincknell’s Ford GT, the 919 turned around, and was left with ground to make up – yet still some 10 seconds clear of the Toyotas.

Ironically Toyota inadvertently produced what looked for so long to have been a key lead change – scattered TS050 bodywork brought out a full course yellow and Porsche pounced. With the lead changing hands with every stop the number two Porsche of Lieb, Jani and Dumas was able to this time pit and exit without surrendering the lead while everyone crawled round at 80kph.

But then luck deserted the number two. Looking to lap the GTE-Am Porsche of Khalid Al Qubaisi Lieb nosed into a rapidly disappearing gap. Al-Qubaisi spiralled into the gravel, Lieb continued, but the car was soon summoned for a drive-through, albeit with Jani behind the wheel. That just a lap after Mark Webber had played the team game and ceded the lead to his championship-heading team-mate.

Webber retook the lead and so the victory, while Duval in second and Jani in third produced the race’s most intense battle until Lotterer chased them down to occupy Jani and the Porsche’s mirrors. They held nothing back as they tussled for the final place on the podium – Jani’s stern defence matched Lotterer’s strong advances, but he rubbed past into the final chicane and finallly made the move stick with an equally robust pass a few corners later. A clout from behind courtesy of the SMP Racing LMP2 was the salt in Jani’s sore wound – hung out to dry by a defensive Fässler then strong-armed from third a handful of edge-of-the-seat laps later, then summoned to the pits for a new rear end.

Had the number two Porsche enjoyed a trouble-free run there would have been three disgruntled cars behind it, as much of the post-race talk surrounded the full-course yellow procedures. Webber and Lotterer were vocal – “it’s like Russian roulette, there must be a better way” they both said – with Duval agreeing: “the number two didn’t deserve the lead, they were lucky to be out front.”

Thankfully the overriding memory for most will be the WEC’s continued knack of entertaining and relentless racing from some of the world’s best. 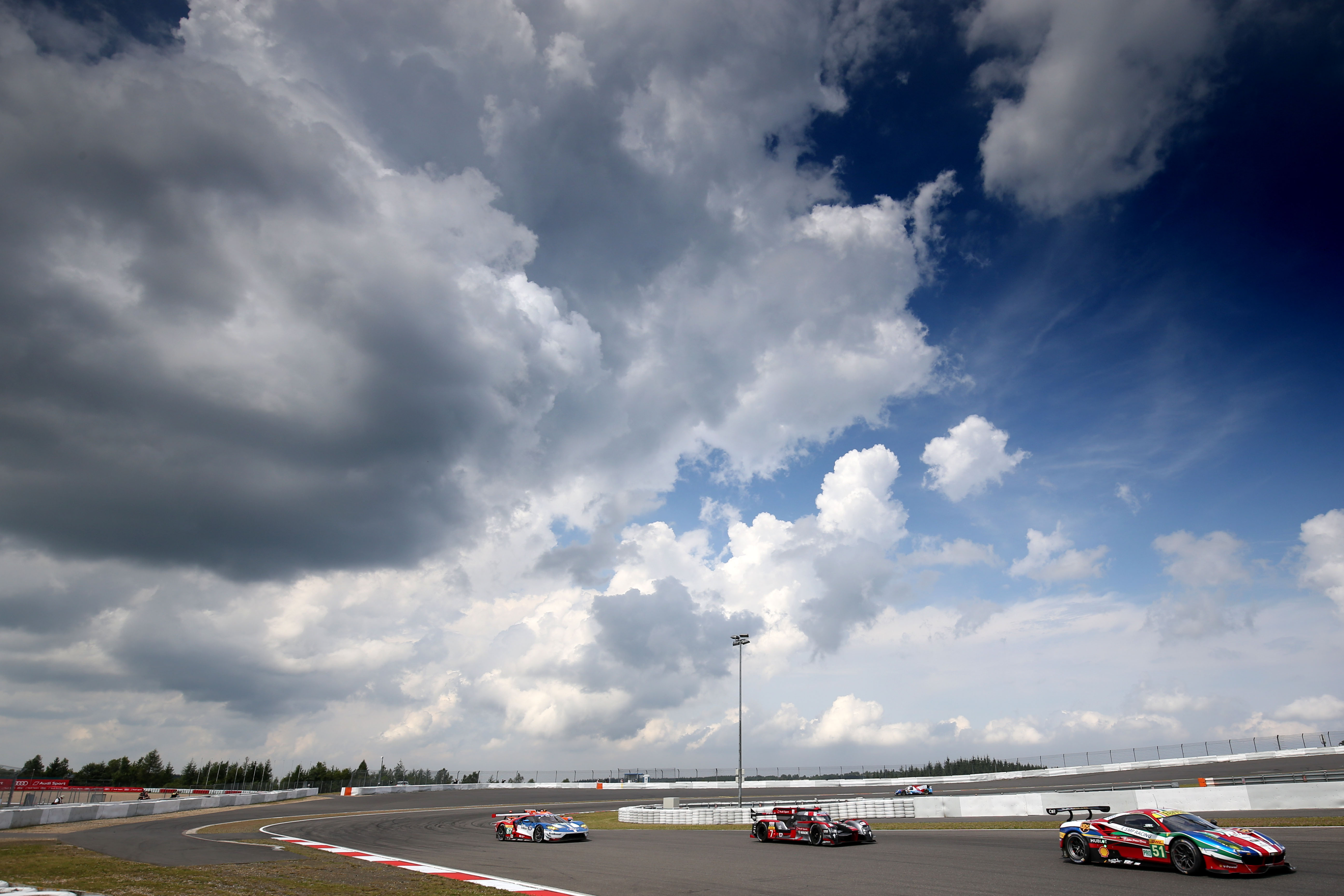 Entertainment was also provided by the LMP2 category, although not if G-Drive had had their way. Top in every session, thanks in no small part to Audi refugee René Rast, a gearbox problem denied them early in the race. But that opened the door for the ever-reliable Signatech Alpine of Nico Lapierre, Gustavo Menezes and the increasingly impressive Stephane Richelmi to take their third win on the bounce. Ricardo Gonzalez’s RGR squad of himself, Bruno Senna, and Felipe Alberquerque took second, while third went down to the wire: just 0.071s covered Extreme Speed’s Ryan Dalziel and Strakka’s Jonny Kane at the flag.

Webber, Lotterer and Duval have a definite anti-full course yellow ally in GTE-Pro for Nicki Thiim and Marco Sørensen lost a dominant lead during one of the three full course yellow periods. Instead it was Ferrari who took the honours courtesy of Gimmi Bruni and James Calado, with team-mates Sam Bird and Davide Rigon second, the latter pairing coming from the penultimate row of the grid, deep in the Am field, having wrongly opted for wets in qualifying. Thiim and Sørensen took third, but only after the Ford of Oliver Pla and Marino Franchitti were handed a drive-through penalty for belts being off while the car was moving on pit road.