Sixty years ago, Graham Hill powered a Jaguar E-type to victory in the car’s debut race, setting the fastest lap in the process.

The car had never been designed for competition, but the Oulton Park Trophy win was yet another accolade for the sleek sports car, which had wowed crowds at its Geneva Motor Show launch a month before. 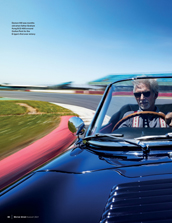 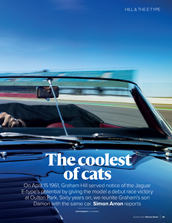 It looked like nothing else on earth and cost a fraction as much as a comparable Ferrari. It wasn’t conceived with competition in mind, yet had scored its maiden race…

Hill’s car, registration number ECD 400, had only driven off the production line a few days previously with mild modifications for track use. But despite the early racing promise of the E-type, it would only compete significantly for that season.

It meant that Damon Hill, just seven months old at the time of his Dad’s victory, would never see him compete in the car.

To mark the anniversary of the maiden victory, Motor Sport brought together Damon and the very same E-type for an evocative blast around Silverstone, ahead of the car’s appearance at this year’s Silverstone Classic.

“You can read the history books, and you can look at the fabulous pictures from back in the day, but I say the same thing every time I drive a car such as this: these things are time capsules, because they don’t change but we do,” says Damon. “They capture a moment. This is a car of its era and was a gorgeous, ground-breaking creation.”

You can read the full, evocative story in our August 2021 issue and see the car itself at this summer’s Silverstone Classic.

The roadster will be on display on each day of the event, which runs from July 30-August 1.

It will also lead an E-type track parade to celebrate the car’s 60th anniversary, on Saturday 31 July. It marks a return to the circuit where it was raced by Graham Hill in the Empire trophy, a few weeks after the debut Oulton Park win.