The FIA and ACO have revealed where the World Endurance Championship is headed, led by its manufacturers, as Gary Watkins explains 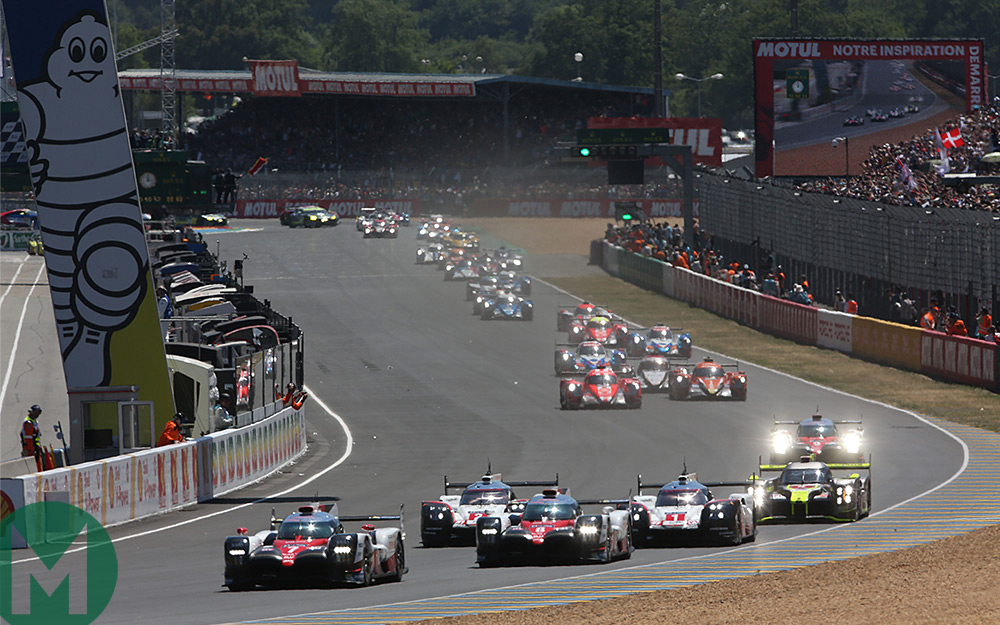 The wraps came off a brave new world of LMP1 prototype racing planned for 2020 and beyond in the week of the Le Mans 24 Hours. What was revealed was one in the eye for those who suggest that it’s time to close a chapter on the hi-tech hybrids that have battled it out around the Circuit de la Sarthe and in the World Endurance Championship since 2012.

Cost reduction was high on agenda during the rule-making process. But so too was giving the manufacturers a technological peg on which to hang their hats. That’s why we’ve ended up with a raft of budget-cutting measures at the same time as an increase in the scope of hybridisation.

Out of the window has gone the idea of increasing the amount of hybrid energy that a modern LMP1 car can deploy over the course of a lap. In its place we will have plug-in hybrid technology and rapid charging, as well as zero-emissions running. That’s racing without recourse to the internal combustion engine to you and me.

The original plan for 2018 was to increase the amount of retrieved energy a modern P1 car could deploy over a lap. There would have been a new, higher class of 10 megajoules – up from the present 8MJ – and three, rather than the present two, energy-retrieval systems would have been allowed.

That was put on ice in the wake of Audi’s withdrawal from the prototype arena after 18 seasons at the end of last season. The need to encourage a new manufacturer to join Porsche and Toyota in the WEC was uppermost in everyone’s mind when that decision was made, because a further escalation in the technology and costs involved was clearly going to be a major hurdle to any newcomer.

So why add a new technological requirement at a time when there is a real attempt to drive costs down? Because that’s what the manufacturers want. The manufacturers – incumbent and prospective – play a major role in the rule-making process, remember. Toyota, Porsche and Peugeot, which has WEC ambitions five years after pulling its entries for the inaugural season of the reborn series, were all sitting around the table with the FIA and WEC promoter the Automobile Club de l’Ouest.

The introduction of plug-in charging and the requirement that each factory P1 car must complete the first kilometre after every fuel stop in full-electric mode will come with a cost implication for the manufacturers. But at the same time it gives them a message to sell.

Plug-in hybrids are very much part of the future of the automotive industry and it makes sense for LMP1 to both promote the technology and drive it forward. An increase in the amount of energy deployed over a lap would just have been more of the same. That all-important message had P1 gone to 10MJ wouldn’t have changed that much.

Engineers involved in the WEC suggest that three retrieval systems would have been required to achieve it, and right now the only viable technology involves recovering energy under braking and from exhaust gases. So Toyota would have had to develop what in Formula 1 terminology is known as an MGU-H (Motor Generator Unit – Heat) and Porsche would have had to add a rear-axle KERS (Kinetic Energy Recovery System). Not much to shout about there. 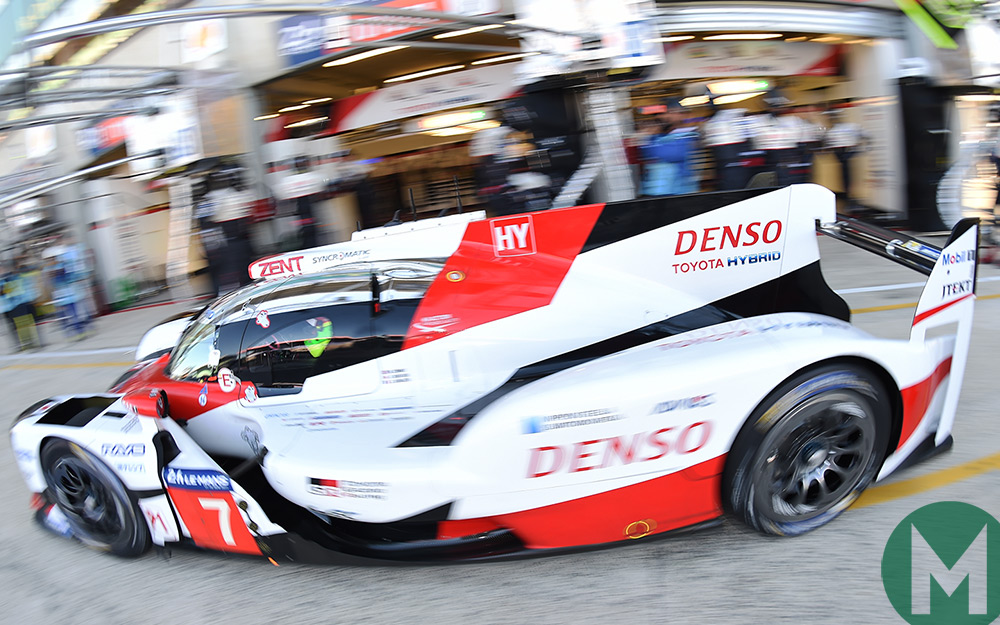 The zero-emissions kilometre makes much more sense for a category that promotes itself as a laboratory for the automotive industry. Before the sports car purists among you get too annoyed, it is worth pointing out that the intention of the rule makers is that the cars will be going no slower under electric power than they would while burning fossil fuel.

They insist that they haven’t plucked the one kilometre figure out of the air. They believe that with a battery capable of storing 8MJ of energy this is the distance that can be covered at proper racing speeds in electric mode.

Don’t forget that the hybrid systems in modern LMP1 cars are as powerful as their internal combustion engines. The manufacturers were quoting total outputs of 1000bhp before the introduction of a new rule limiting electrical power to 300kW or 400bhp. The conventional engines have somewhere north of 500bhp, so the maths back up the contention of the rule makers.

There will also be a requirement for the factory P1 cars to take the chequered flag of WEC each race under electric power. This isn’t the important rule when it comes to promoting zero-emissions technology, but it’s a nice little twist.

All this is going to add cost, but nowhere near as much as a move to 10MJ and three energy-retrieval systems. At the same time, cost is going to be taken out of P1 by a series of familiar measures. There will be a reduction in testing, windtunnel hours, personnel at the track and the number of engines allowed each season.

There’s one new rule planned that doesn’t seem quite so obvious as a tool to reduce costs. Active aerodynamics will be allowed. Elements of the rear wing and the flaps under the nose that have been there in P1 since 2014 will be permitted to move while the car is out on track.

Active aero will go hand in hand with a ban on bodywork development during the year. A rule restricting each manufacturer to three aero packages was introduced for 2016. The limitation is now two for this season and will go down to a single spec of bodywork for 2020.

It’s not easy to explain the logic, so I’m going to leave it to FIA technical director Bernard Niclot: “To manage the compromise between top speed and downforce you have to come up with very complicated solutions with passive aerodynamics that cost a huge amount to develop. With our solution, we believe you can achieve a high level of performance with lower development costs.”

Development of all aspects of the car is going to be limited between seasons from 2020. That’s significant, because the manufacturers are basically developing all-new cars around their existing monocoques every year.

Each part of the car will be ascribed a number of units and then a total number of units allowed to each manufacturer. Developing a high-number item such as the engine will have an affect on the amount of work that can be done elsewhere. That all seems to make sense.

The rules package for 2020 includes a lot of bold initiatives. They are exactly what is required. Budgets clearly need to be reduced, but at the same time the manufacturers need to be able to trumpet their technological credentials.

There are a lot of unknowns surrounding future participation in the P1 class right now. Porsche appears to be looking at Formula E and Toyota boss Akio Toyoda made some strange comments after Le Mans that are not easy to interpret. On the one hand he suggested that hybrid technology might “not be ready for the long distance” of the French enduro, but then went on to describe the race as a “precious laboratory”.

We’ll hopefully know soon whether the manufacturers are ready to sign up for these rules. But the incentive is there for them to shout from the roof tops about the technology they employ in the road cars you or I will end up driving one day.

Why Hypercars will be as big as F1: Richard Mille on the formula of dreams

Sports car looks set for a return to its glory days with the new Hypercar era but Richard Mille, president of the FIA Endurance Commission, has even bigger ambitions to match the success of Formula 1

The full wraps are finally off Ferrari's 499P Le Mans Hypercar – can it put the Scuderia back on La Sarthe's top step after almost 60 years?

'Steve McQueen was a racer. Paul Newman was too calculating'

No movie has captured the intensity of endurance racing like Le Mans, driven by the passion of Steve McQueen and supported by a grid of top racers. Our new special issue goes behind-the-scenes of the eventful film shoot