If he hadn’t been so tightly strapped in, Ash Sutton would have been kicking himself.

In a series as tight as the British Touring Car Championship, you have to capitalise on every possible opportunity, and he’d just seen a glorious one literally go up in smoke.

Colin Turkington isn’t the sort of driver who makes mistakes regularly. Yet at Croft he made a big one. One that looked to have presented Sutton with a chance to open up some genuine daylight in the title chase. But for once Sutton’s usually fantastic all-guns-blazing approach backfired and cost him dear.

He still leads the standings, but only by a mere seven points after a weekend that didn’t favour either of the title rivals but spiced up the championship fight nicely by effectively doubling the number of horses going for gold.

There were twin wins for the superb Josh Cook and BTC Racing, and another for Tom Ingram in the Toyota Gazoo Racing Corolla, which has elevated him squarely back into the championship picture.

For Turkington, however, even his reputation as ‘The King of Croft’ couldn’t save him after two damaging non-scores – one self-inflicted, the other just plain unlucky – dropped him to third in the championship. 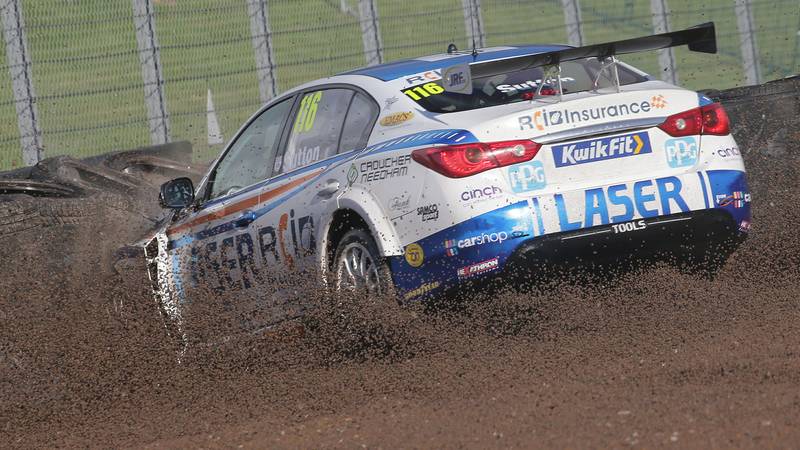 Yet, at the start of the weekend all was going swimmingly for the BMW man, while everything so nearly went south for Sutton right from the start when he skated off the road at Clervaux during the soaking wet qualifying session on Saturday, brought out the red flags and had his fastest qualifying lap deleted as a result. Fortunately for him, he wasn’t the only casualty of a turbulent session.

Tom Ingram had taken pole in the Corolla, but was swiftly dumped to the rear of the grid when the car was found to be below the minimum ride height – something later found to be a legacy of a damaged wishbone.

That handed pole to Senna Proctor’s Hyundai, until that swiftly failed the same test and he joined Ingram at the rear, too.

All the post-session shuffling gave Cook pole, ahead of Jake Hill’s older Honda Civic, with Turkington third, and Sutton elevated back to sixth. He could do something from there. And once again he put in a starring performance, even if things didn’t go quite to plan. 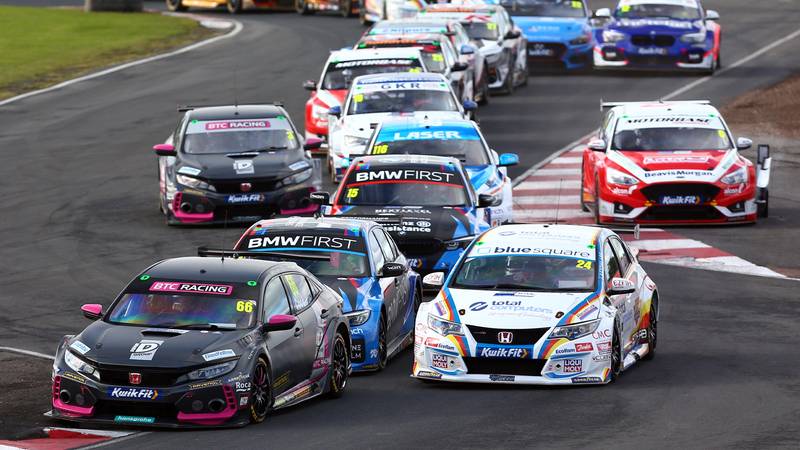 Cook maintained the lead from pole in race one

An adjustment to the turbo boost of rear-wheel-drive cars ahead of Croft brought both the infamous BMW and the Infiniti starts back into play. They still carried an 11.5 per cent reduction in boost in the lower gears against the front-wheel-drive cars, but that restriction now only applied up to 68mph, rather than 78mph as it was before.

Turkington made good use of it, dragging alongside and momentarily past Hill for second before Hill fought back around the outside of Hawthorn Bend to slot back in behind leader Cook.

That established the top three, as things got dramatic behind. Sutton enjoyed a great first lap to run fourth behind Turkington and was just beginning to put some pressure on the BMW when he found himself facing the wrong way entering the Complex. Rory Butcher’s freshly rebuilt Motorbase Ford had made a move up the inside of Tom Oliphant right behind, and inadvertently clipped Sutton’s bumper on his way through, sending the Infiniti spinning.

Sutton got back on the throttle to at least arrest the worst of the spin, but found himself back in 14th, and in trouble. 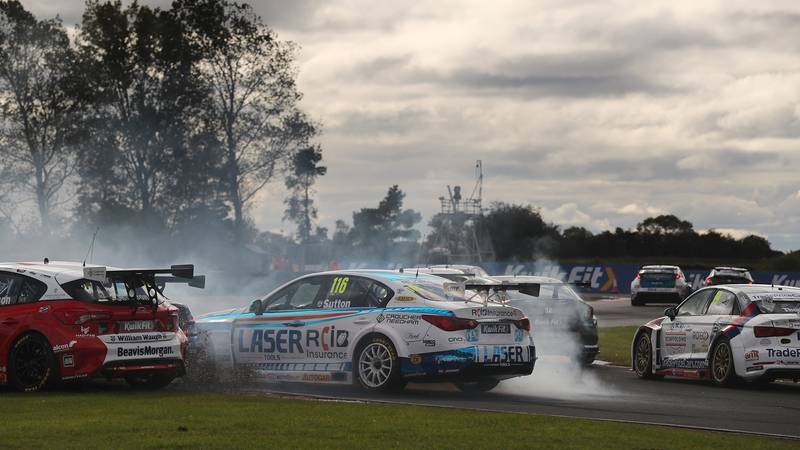 Strong run from Sutton was interrupted by a smoky spin

Yet, in typical Sutton fashion, he got his game face on and began a charge back through the order, repeatedly making late dives to the inside to catch his rivals unaware into the hairpin. He was back into fifth by the flag, right behind Butcher. However, the places were switched post-race after officials looked into the earlier contact, making fourth an amazing result in Sutton’s book. It limited the championship damage nicely, and handed him a two-point lead over Turkington.

Up front, Cook was superb, if a little lairy, as both he and Hill danced around the damper parts of the track on slicks to claim a Honda one-two.

“That race was hard work,” said Cook. “Jake really didn’t make that easy. While the track was mostly dry the fastest bits were the wettest bits, and I was quite brave with setup, which gave me a few eye-opening moments. We might have to tone that down a bit for the second one.”

Tom Chilton was sixth, behind the penalised Butcher, with Matt Neal leading the Dynamics Civics in seventh and team-mate Dan Cammish back in a disappointed 10th, having started way back in 14th after his fastest quali lap was deleted for track limits. At this point, it didn’t look much like being Cammish’s weekend. And then came race two.

The problem with surprises is, they tend to only work once. After Sutton’s heroics during the first outing, his hairpin-diving antics were well known ahead of the second race. And that would cost him dearly. 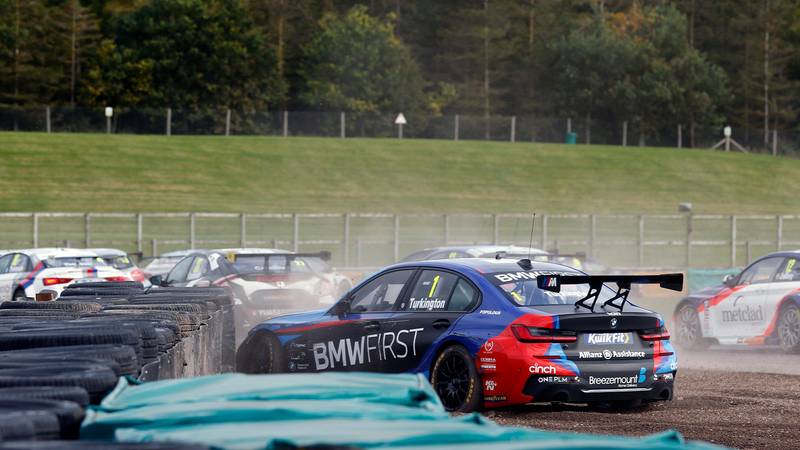 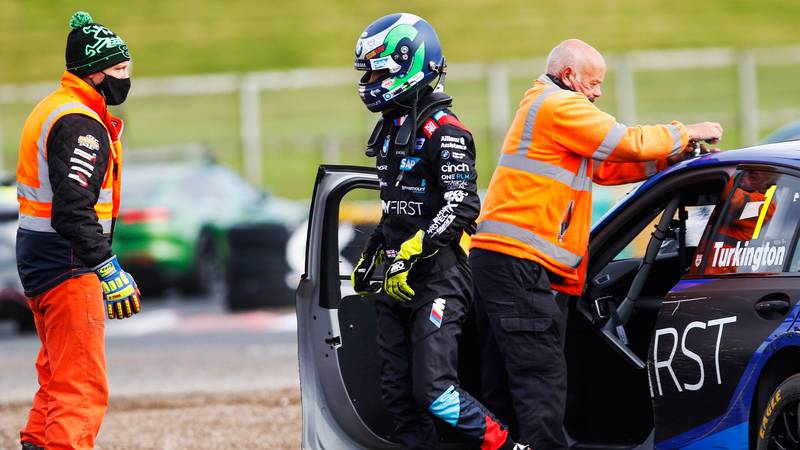 If Sutton loses the BTCC title this year, he’ll look back to lap seven at Croft as one of the big moments a second crown got away. Everything was set up beautifully for him to make huge headway in the championship. Turkington had already got it wrong, locking his ice-cold fronts into Clervaux off the start, slapping into the tyre barrier and out of the race. It was the kind of mistake a driver like Turkington hardly ever makes. Sutton needed to capitalise. But he didn’t.

Instead, running third right behind Hill, Sutton opted to go for glory and made his now all-too-familiar lunge on Hill, except Hill was wise to it, covered the inside… and whack! Sutton’s front-right rammed Hill broadside, the contact puncturing the Infiniti’s Goodyear. 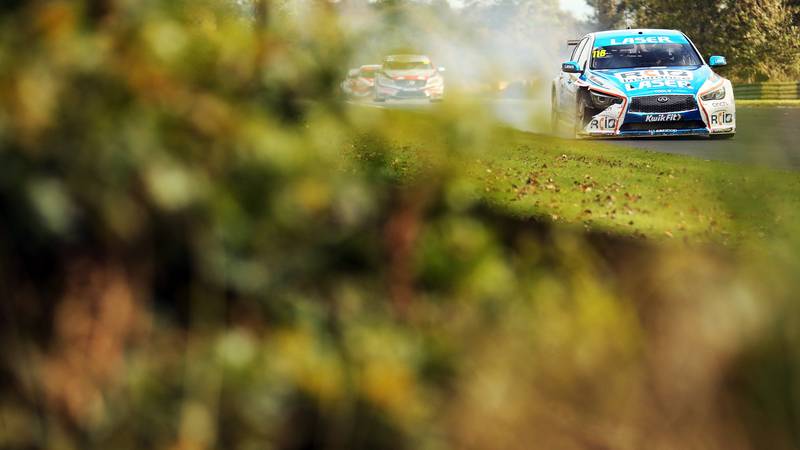 There was a shake of the head as Sutton trailed to the flag in 20th after a stop to change the flailing rubber, and even his attempt to bag a bonus point for fastest lap was ruined when he pushed too hard and locked the new one into Tower before it was up to temperature. This was not his finest moment.

But amid all the drama, there was still a race to be won, and Cook made it a wonderful double, even if he needed a hand from the stewards. 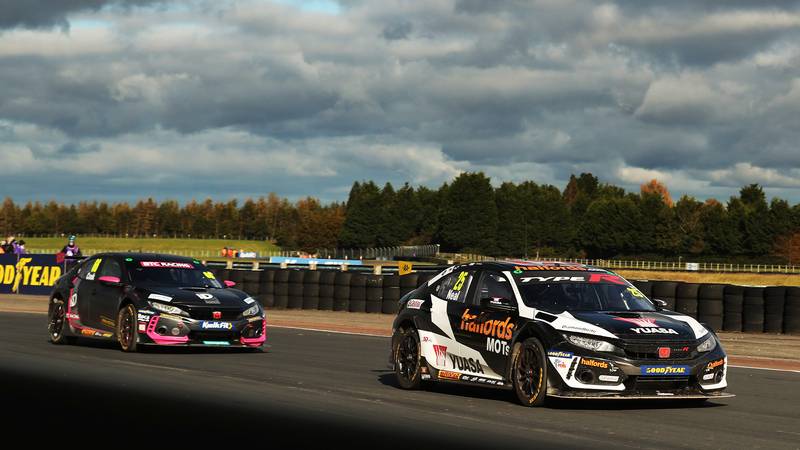 Neal squeezed through past Cook – a little too closely

With the trouble ahead, Neal had picked his way through to run second in the closing laps, and his much-lighter Honda had little trouble hunting down the fully ballasted Cook. Cook kept Neal behind until the final tour, when Neal committed to a move on the brakes entering Sunny-In, clipped the side of Cook sending him sideways, and made his way through to claim what would have been his first win of the year. However, the stewards took a dim view of the move, and put Cook back ahead, with Hill rounding out the podium.

Ingram was fourth, building nicely on his great progress from the back to 13th in the opener. But perhaps the biggest benefactor of the title protagonists hitting trouble was Cammish, whose fifth place moved him to within 13 points of the summit. A three-horse race was now well and truly back on, but about to become four. 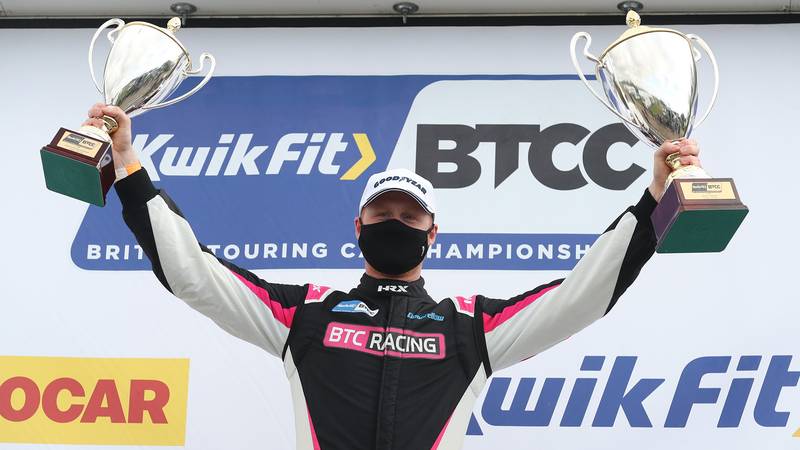 Two from two for Cook after the second Croft race

The final outing was set up to be a thriller. The top two in the championship were starting at the back after their race two issues, and both with ballast-free cars. It would be a straight fight for the championship lead. But we were all denied the chance to see it when Turkington was the innocent victim in a multi-car shemozzle into Hawthorn and received a whack to the side that broke his suspension. Game over.

Sutton made it through the chaos and proceeded to gain huge amounts of ground on his way to fifth at the flag to ensure he would leave Yorkshire still at the head of the table, but not by as much as he’d have liked.

That was largely due to the duo of Ingram and Cammish. Chilton inherited pole for the reversed grid ahead of Cammish and Ingram, but immediately lost out to the flying Ingram, who got a superb launch to draft into the lead through Clervaux. 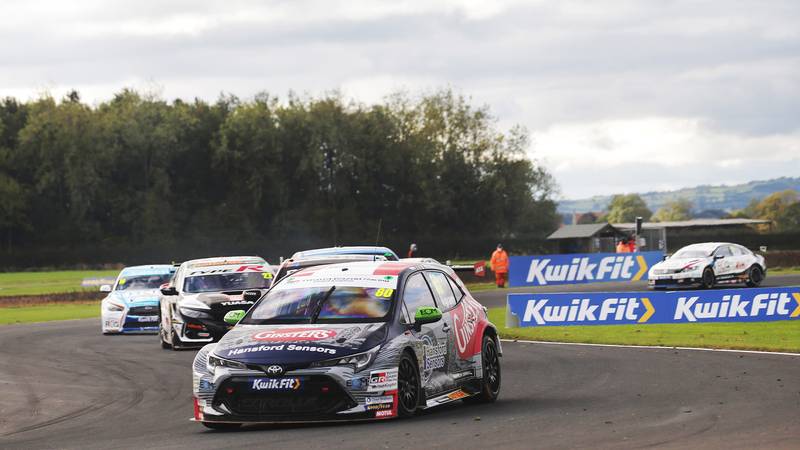 Ingram catapulted to the front at the start of race three

As at Thruxton and Silverstone, Ingram’s setup gets the fronts working early, but has a tendency to fade toward the end. What he needed to do was forge an early gap and maintain it. And he did just that as Chilton frustrated Cammish behind. But then Ingram’s hard work came to naught when the safety car was called following a colossal accident for Bobby Thompson when his Audi was pushed wide at the Jim Clark Esses, dug in and barrel rolled. It was a sad end to a strong weekend for Thompson, and a relief to see him emerge unscathed from the wreck.

But when racing got back underway, Ingram had already taken the best from his tyres, whereas Cammish was just getting started. He pushed hard to find a way past Chilton, eventually grabbing the place with a dive into Tower as both Hondas’ brakes began to feel the strain.

Once through, Cammish hunted down Ingram, but the Toyota held its lines impeccably and just held on to complete a back-to-front comeback.

“This weekend has been a constant surprise, we basically started in a different county this morning so to win now feels amazing,” said Ingram. “It shows just how this championship can turn around so quickly and that you cannot let your head drop.” 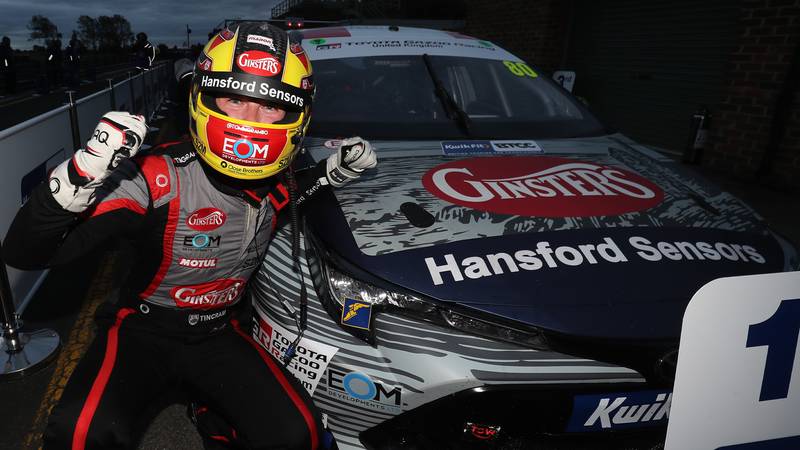 Ingram still in the title race with victory in race three

Cammish’s second place also handed him second in the standings, just seven behind Sutton. Chilton secured third, despite an electrical glitch briefly switching his dashboard off mid-race, while Neal was fourth ahead of Sutton.

For all his entertainment value, this was still a glorious chance missed, and Sutton knew it. “I’m making things so hard for myself,” he rued. “The move in race two had worked so many times before but shot me in the foot on that occasion, and I have nobody to blame but myself. But I have to take the positives. We’re still leading this, even if it could have been a lot more comfortable.”

With just six races left to run this year, the time for mistakes is now officially over.

2020 BTCC Championship points after Round 21