There are two ways to win a championship: the first is the more reserved, tactical approach, being unwilling to take too much risk at the cost of a solid if unspectacular reward. And then there’s the other way, which is to take events by sheer brute force, sledgehammer the results home.

The British Touring Car Championship’s annual trip to Knockhill featured a great display of both methods as the title battle began to narrow to a two-horse race between the wily fox Colin Turkington and the results juggernaut that is Ash Sutton.

While Sutton became the first driver to win two races at the same event this year to close the gap to points leader Turkington, the reigning champion limited the damage as best he could by following Sutton closely in both outings to continue his impressive points-scoring streak. While Turkington had his chances to send one down the inside of Sutton, he never took any of them, preferring to play things safe on what can be a highly damaging circuit should things go wrong.

Rory Butcher kept himself in the title hunt with a home victory in his Motorbase Ford Focus in the reversed-grid finale, but even he couldn’t count on home advantage to help haul in the runaway leaders.

Sutton was the star of the first outing, and of a disrupted qualifying session. So far this year, qualifying hasn’t been the best for the Laser Tools Infiniti Q50, with the team usually facing an uphill battle to find suitable setups during practice, often still refining come qualifying. However, this time around Sutton enjoyed a clean practice, with good progress through each session, so it wasn’t too surprising to see him emerge top from a difficult qualifying session, which was red-flagged after a nasty accident for Matt Neal.

But even with Sutton out front securing the Infiniti’s first-ever BTCC pole, Turkington was still lurking. He did enough to drag his fully ballasted BMW 330i M Sport to third on the grid, with Jake Hill’s Honda Civic separating them. That would be enough for Turkington, as he used the rear-wheel-drive traction advantage to breeze past Hill and chase Sutton when the race got underway.

Hill pushed hard to try and get the place back, but his efforts were stunted when the race was neutralised when Josh Cook endured a hefty accident at the chicane as his BTC Racing Honda swapped ends and put him backwards hard into the barrier. 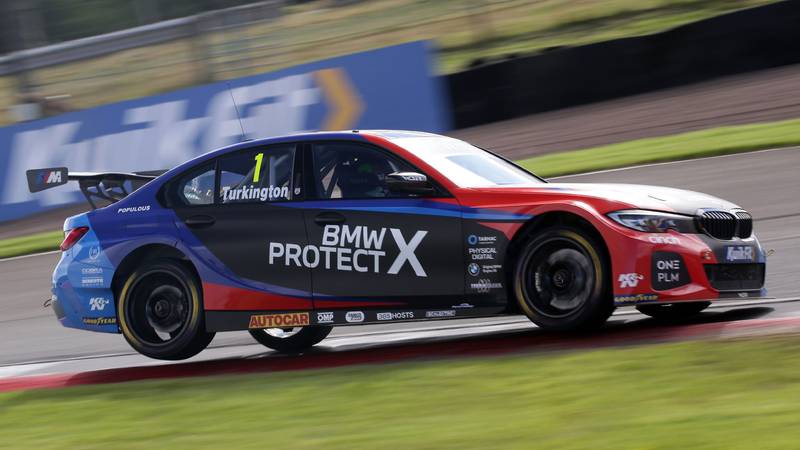 The delay allowed Sutton to preserve his tyres and, when racing resumed, Turkington pressed hard but simply couldn’t find a way past the impeccably driven Infiniti.

“We needed that,” said Sutton. “Pole was a great result for us, as every little point we can claw back on Colin is vital. “Obviously the initial plan was to just break clear and the opening lap was the perfect time to do that while everyone squabbles. But the safety car closed that down, so it was just a case of getting a clean restart, and then managing the gap from that point onwards. Colin applied a little bit of pressure into the hairpin a couple of times, but it was under control.”

Behind Turkington, Hill secured his second podium of the season just ahead of Tom Ingram’s Speedworks Toyota, who so nearly suffered the same fate as Neal during qualifying but managed to escape the worst of his spin.

Butcher managed fifth, ahead of Dan Cammish and Neal as the Team Dynamics Hondas ran in formation to the flag.

The power threatened to shift back in Turkington’s favour for the second race, with he and Sutton swapping ballast after the race one results. But in the end, even the six-kg swing couldn’t make any difference with Sutton again producing an exceptional defensive display.

While the race was by no means a classic, it did serve up a sizable dose of tension with the lead two locked together for the full distance.

Sutton won the drag-race to turn one, and then simply defended for his life from the chasing BMW for the full 27 laps. Turkington gave it his all but was rebuffed with each advance.

“I’m over the moon,” said Sutton. “I think I can say that it’s the best ever touring car I’ve driven. Colin put some huge pressure in at the start and we can never match what the BMW can do off the line, so that was my biggest concern. And from then on it was just a case of managing Colin from there.

“You saw he was constantly there, I was always having to look in my mirrors. I defended probably four or five times more than I did in race one. So it definitely shifted to his favour. He made one slight error three-quarters of the way through the race which just gave me that margin again to bring it home.”

Ingram got himself involved in the lead battle early on but soon had to turn his attentions rearwards to defend the final podium spot from Cammish. After their strong first race, both Hill and Butcher fell back after their own private battle, which ended with Butcher making a lunge at the complex, only to get it wrong and skate through the gravel. That helped Aiden Moffat to sneak through and grab fifth in the second Laser Tools Infiniti, ahead of Tom Oliphant’s BMW, Tom Chilton’s Civic, with Hill eight and Butcher falling back to 10th. 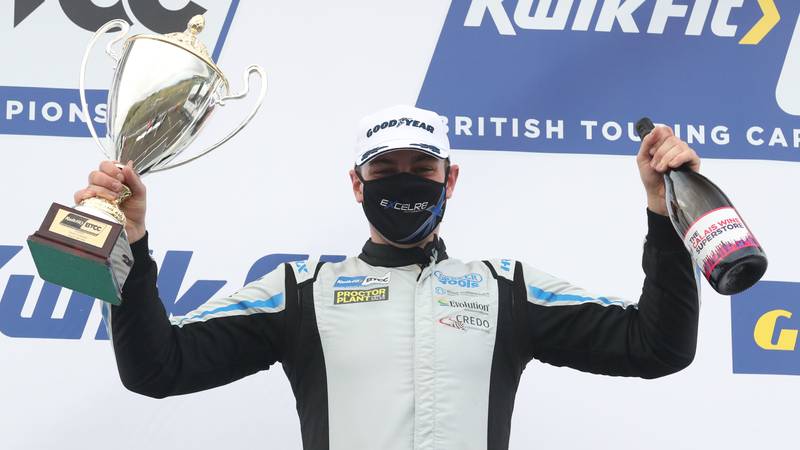 Sutton gave himself a load of work in the final outing when he drew number 11 from the bag for the reversed grid, placing Senna Proctor’s ExcelR8 Motorsport Hyundai on pole, with Butcher alongside.

Butcher initially got the best getaway to lead, but his work was undone by a big accident that caused the race to be red-flagged and restarted. Ollie Jackson suffered a spin at the chicane after his right-rear wheel ceased and ended up broadside across the road, where he received a hefty hit from Mike Bushell’s helpless Vauxhall Astra, and then a second when Sam Osborne’s Honda arrived on the scene. Luckily all escaped largely unscathed, and the stoppage and re-grid gave Proctor a second chance at holding off home-hero Butcher.

But he couldn’t take it. Again, Butcher got the power down better to draft into a lead he’d never lose, racing clear to win by over six seconds to notch his second triumph of the year, even if he counted it more like his first.

“I felt after Oulton, Josh [Cook, who beat Butcher on the road but was then disqualified due to a ride height infringement] drove so well in that race and I got handed the win; I didn’t want to take my first victory in the new car in that way,” said Butcher. “To do what we just did there on home ground has made up for it. I’m so pleased for the team. I’ve had quite a difficult day. I was really pleased with race one, making up one place and getting past Cammish was great, but in race two I wasn’t really proud of my performance there.

“I’ve been getting superb starts this year, doing a lot of studying into how to launch the car best and I was confident going into that race that I could lead going into turn one.”

Proctor ended up a comfortable second to secure the second BTCC podium appearance for the new Hyundai – following Chris Smiley’s second place at the season opener at Donington. Chilton took the final podium spot ahead of Hill and Cammish, while Smiley just held off Moffat for seventh.

Behind them, Turkington ended his weekend with ninth after a dice with Moffat that left a sizable dent in Turkington’s rear bumper. That alone told a story of preservation for the points leader.

Ingram took 10th ahead of Sutton, who could do little when mired in traffic and carrying maximum weight.

The net result is that Sutton has eaten into Turkington’s advantage, whittling the gap down to 10 points. But beyond the top two, you have to look a full 33 points back to find Butcher in third. So, unless either of the top two endure a total nightmare, that two-pronged approach to this season looks likely to win out one way or another.