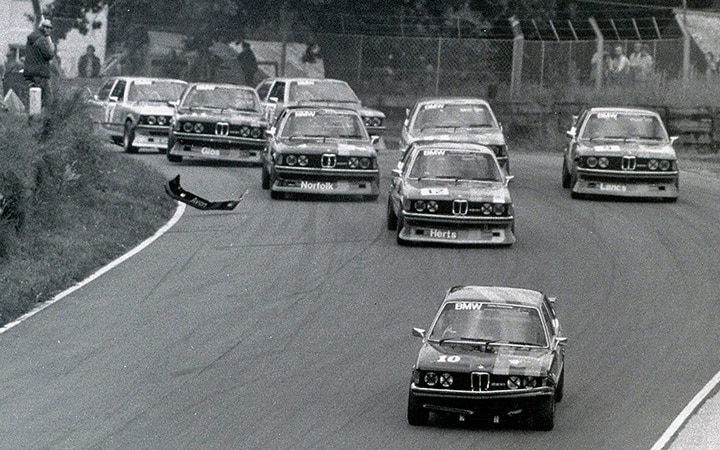 Had modern stewarding techniques been applied, chances are that most of the BMW County Championship field would have been black-flagged by about lap three. For two seasons, though, it was a lively support series at major UK race meetings, featuring a blend of established and rising stars in identical, Tom Walkinshaw Racing-prepared E21 BMW 323is.

This is where highly charged testosterone met stubborn resistance, bright young things wanting to show what they could do while the tin-top establishment tried to prove that, actually, they couldn’t. Such as Martin Brundle, Nigel Mansell and Tiff Needell competed here on their way up the ladder, while the likes of Barrie Williams, Stuart Graham and Brian Muir had been there, done it and polished the trophy.

As the series’ name suggests, each BMW represented a British county and the driver roster varied from meeting to meeting – it was the car that scored points. A few of the tie-ups were wholly logical (Frank Sytner representing Notts, for instance, and Martin Brundle Norfolk), but others were a bit of a stretch. Australian Brian Muir sometimes raced for Kent, Austrian Dieter Quester for Norfolk and Italian Umberto Grano for Gloucestershire, but the amalgamated experience and potential were invariably vast – and some guest drivers were already headline names (Barry Sheene, for instance).

Taken from the spectator bank at Deer Leap, with Pentax K1000 and 250mm lens, the first of these two photographs shows a bunch of trouble hurtling through Lodge Corner, Win Percy leading in the Avon car (freshly detached from its front spoiler, which is about to be demolished by some of the seven cars disputing second place). Behind him, the baying mob includes Needell (Herts), Brundle (Norfolk), Williams (Glos) and John Bright (Lancs).

The gathering accident duly unfolded and shot two shows the partial consequence: on the far side of the track, Barrie Williams is glaring in the general direction of a 323i that’s wedged against the Deer Leap sleepers. (Nigel Mansell was involved too, if memory serves, but pulled off on the pit straight, out of shot). Through all the chaos, Tony Dron – having a stint in the Notts car – emerged victorious.

I showed the second photo to Martin Brundle some time ago and he confirmed the wreckage was his, adding, “I seem to remember it being Tiff’s fault.” If Mr Needell has any thoughts on the matter, they can be posted below.

Update:
Tiff got in touch via Twitter: “Brilliant stuff! I was Herts man. Met my wife Patsy who worked for BMW at the time – and stuck Brundle in the wall!”

Born December 6, 1948 in Stockholm to Finnish parents, Keijo ‘Keke’ Rosberg was a karting champion who moved into car racing and enjoyed success in Formula Vee and Super Vee.…

Jochen Rindt: the man who brought cars to dancing life

Jochen Rindt was super-cool and mega-quick. With the stylish, willowy Nina on his arm and stopwatches, this German-born Austrian epitomised motor racing in the second half of the 1960s. Even…