I’m always wary when I hear somebody anoint a particular era as the Golden Age of Motor Sport.

For me, it was the Cosworth DFV period of Formula 1. For you, it may be the Group B insanity of the 1980s or the Nextel/Sprint Cup decade of NASCAR or the formative years of off-road racing. For my lunch companion, 85-year-old Raoul “Sonny” Balcaen III, it was Southern California during the 1950s. But as he regales me with tales of his youth, all covered in greater detail in a memoir he’s in the process of polishing, I have to confess that I’m starting to think he may be right.

As a teenager, Balcaen was present at the birth of the modern sport of drag racing. A few years later, he was standing in the dyno room when the Scarab Formula 1 engine was fired up for the first time. In between, he was mentored by a who’s who of heroes of West Coast road racing, and this experience gave him the know-how to help launch the career of Jim Hall.

“It was,” he says, with characteristic understatement, “a very exciting time.” 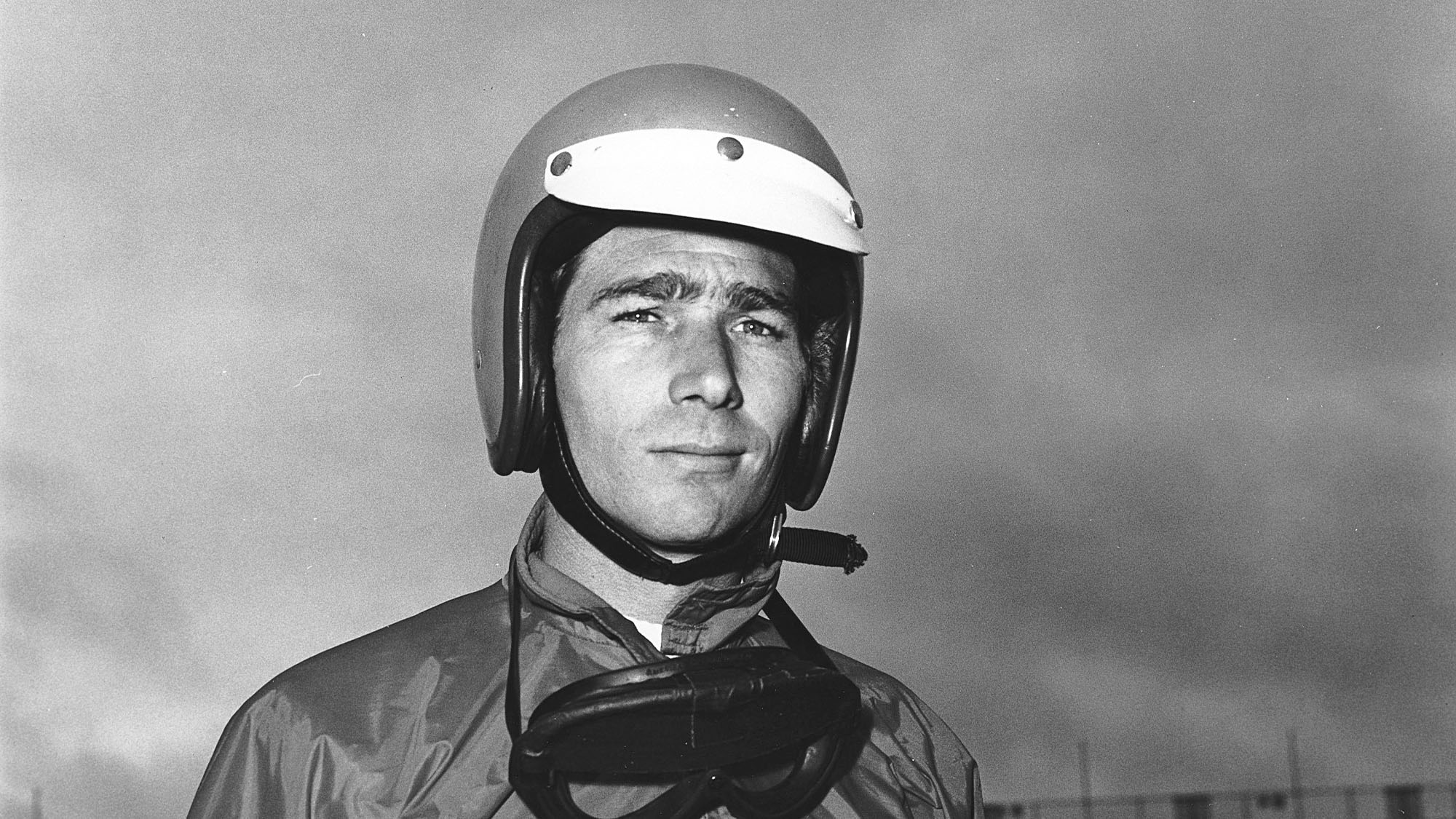 Motor sport has been part of the fabric of Southern California since the inaugural Santa Monica Road Races in 1909. And, of course, the region has been a hotbed of car culture for the better part of a century. But it wasn’t until after World War II that the region emerged as the epicenter of the American racing industry.

Why? For starters, pro racers big and small began flocking here after Harry Miller opened a shop in downtown Los Angeles and started building the jewel-like thoroughbreds that would dominate the Indy 500 during the Roaring Twenties. Southern California was also the cradle of hot-rod civilisation, so there was a vast talent pool of self-taught customisers who understood how to make cars go faster. Another element of the region’s secret sauce was the presence of the aerospace industry, which created a large cadre of skilled craftsman and a treasure trove of surplus-parts stores filled with cutting-edge components and materials.

To this, Balcaen adds one additional factor – the pioneering work of his friend Robert “Pete” Petersen, who founded Hot Rod in 1948 and established the template for the American car-enthusiast magazines, which served as both news services and repositories of how-to knowledge. “The magazines were like the internet,” Balcaen says. “They were the vehicle that reached people. If it hadn’t been for Petersen, the industry wouldn’t have gotten off the ground.”

Balcaen himself absorbed a lot of his early knowledge from reading Hot Rod, which inspired him to start street racing his mother’s Chevy when he was 15. This led to a gig driving a nitro-powered “digger” – a willowy, front-engine, purpose-built dragster – for drag racing legend Ed Donovan. Eventually, Balcaen would build a Top Fuel dragster of his own – dubbed the Bantamweight Bomb because of the drilled chassis rails – and win races everywhere from Lion’s Drag Strip south of L.A. to Half Moon Bay near San Francisco.

But there was no money in drag racing at the time, so Balcaen found a day job as a mechanic at the Beverly Hills sports car shop run by Warren Olson. Besides serving as the local Cooper distributor, Olson catered to a celebrity clientele. One of his best customers was a rich, young wannabe racer named Lance Reventlow, who was the heir to the Woolworth fortune. When he was 19, Balcaen restored Reventlow’s Bugatti Type 57 Stelvio convertible. 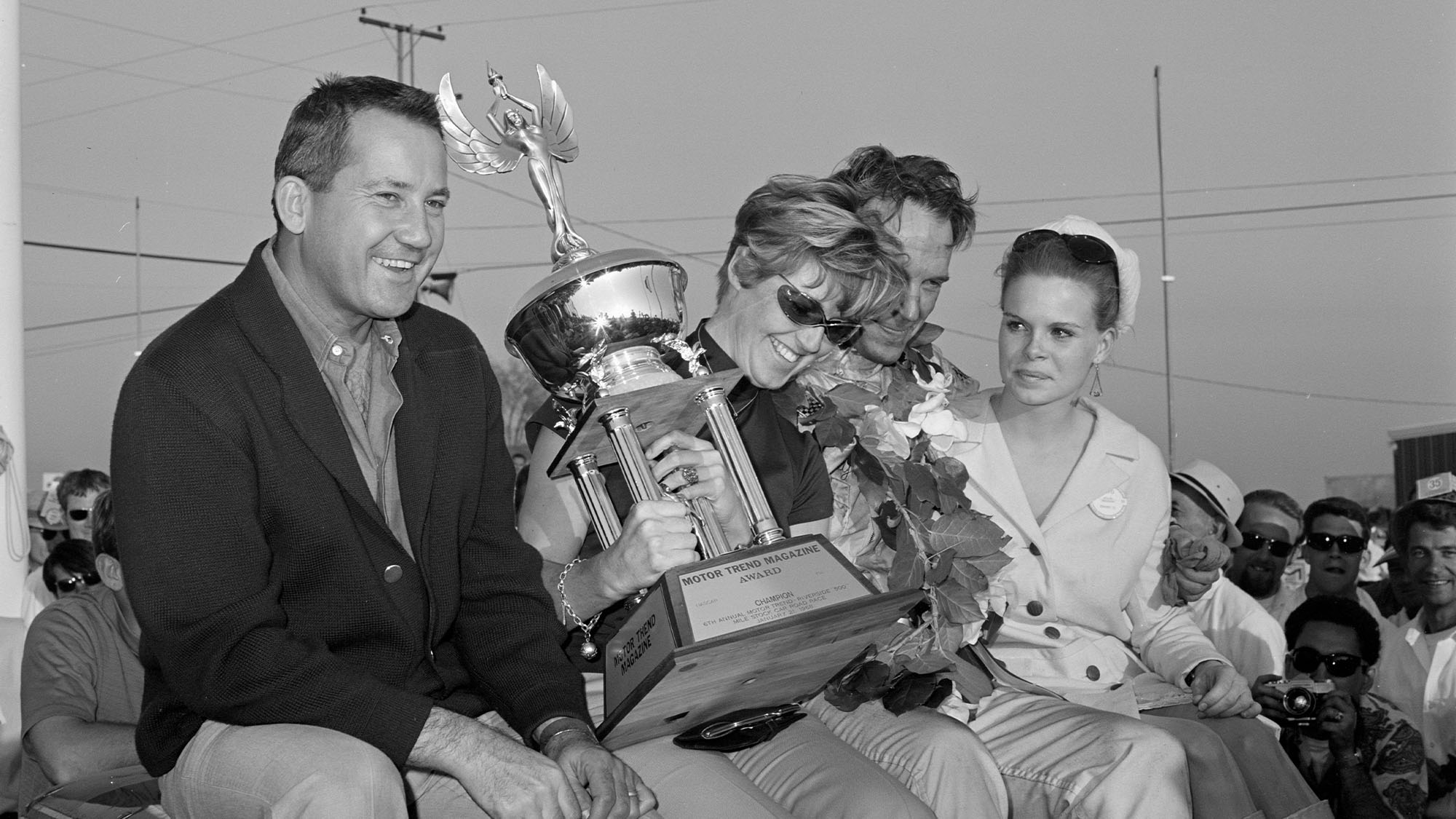 Through Reventlow’s friend Bruce Kessler, Balcaen met Carroll Shelby, who hired him to race-prep and support the sports cars being campaigned by another lanky Texan, Jim Hall, a recent Caltech graduate who was moving up the road-racing ranks. At the time, Hall was running a 2.0-litre Maserati and a Ferrari 750 Monza, with a Lotus Eleven and a Lister-Chevrolet on the way. Balcaen enjoyed his time with Hall but hated working out of a shop in Dallas. “It was hotter than hell in the summer and colder than hell in the winter,” he says.

Balcaen helped develop the desmodromic F1 engine designed by Leo Goossen and was slated to travel to Europe for the Grand Prix season. But a tour in the U.S. Army intervened, and by the time Balcaen was discharged, RAI was imploding. Reventlow’s rear-engine cars had been failures, and the company was hemorrhaging money. “We had all these commercial opportunities,” Balcaen says, “but nobody took advantage of them.” 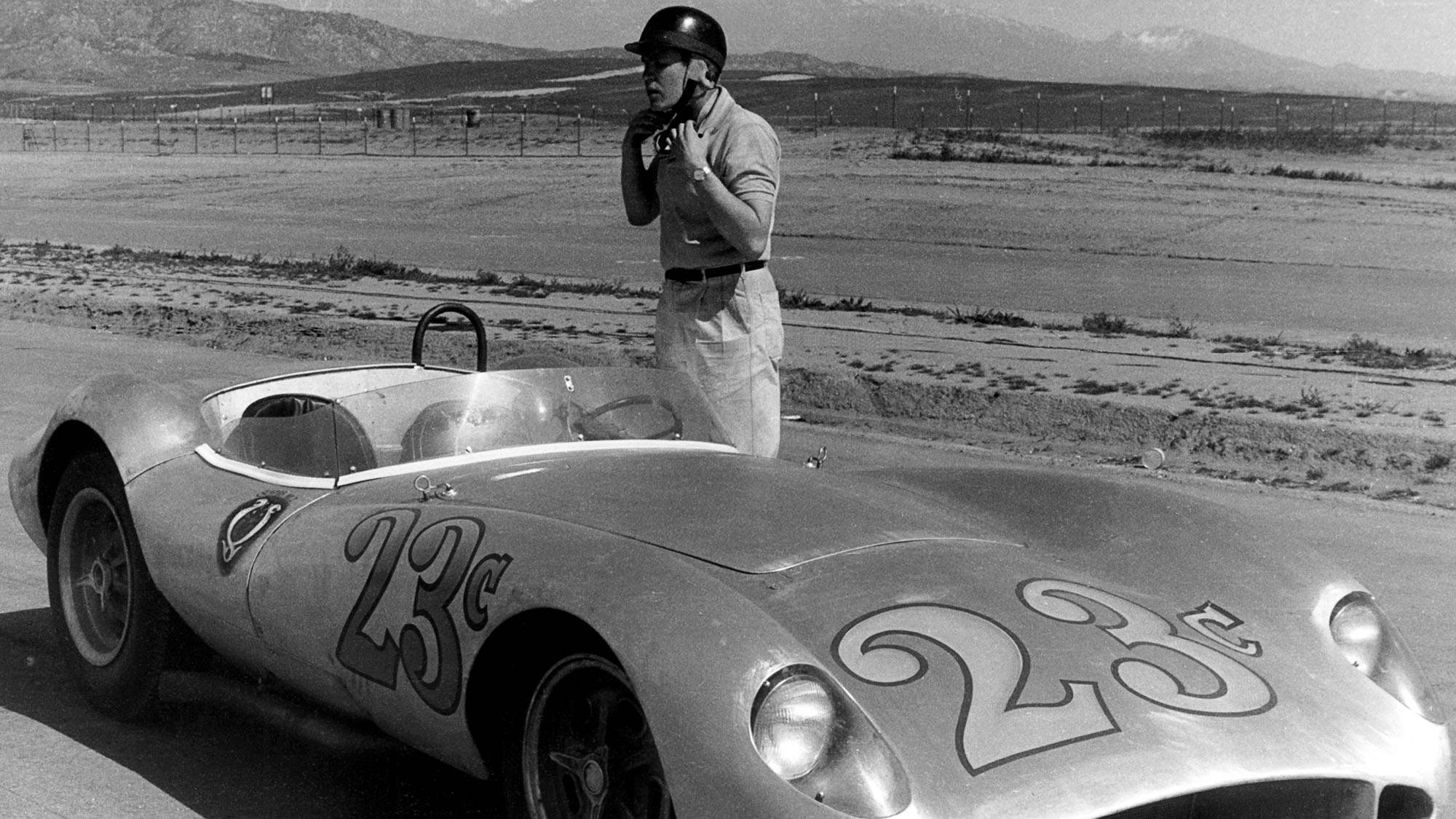 Racing was maturing into an industry, and there was no room for dilettantes like Reventlow. But Shelby, a pro’s pro, understood how the game was played. So did Balcaen. After doing some consulting work for Shelby, Balcaen briefly went into business with designer Peter Brock, then formed his own firm, the Induction Engineering Company, which produced go-fast after-market parts for the Chevrolet Corvair – “the poor man’s Porsche,” as he called it.

Motor sport is bigger and more profitable now than it’s ever been. But at the same time, it’s so technical and corporate that it’s hard to imagine another confluence of racers like the ones in Southern California during the 1950s, when the racing universe seemed more like a family affair than an industry. 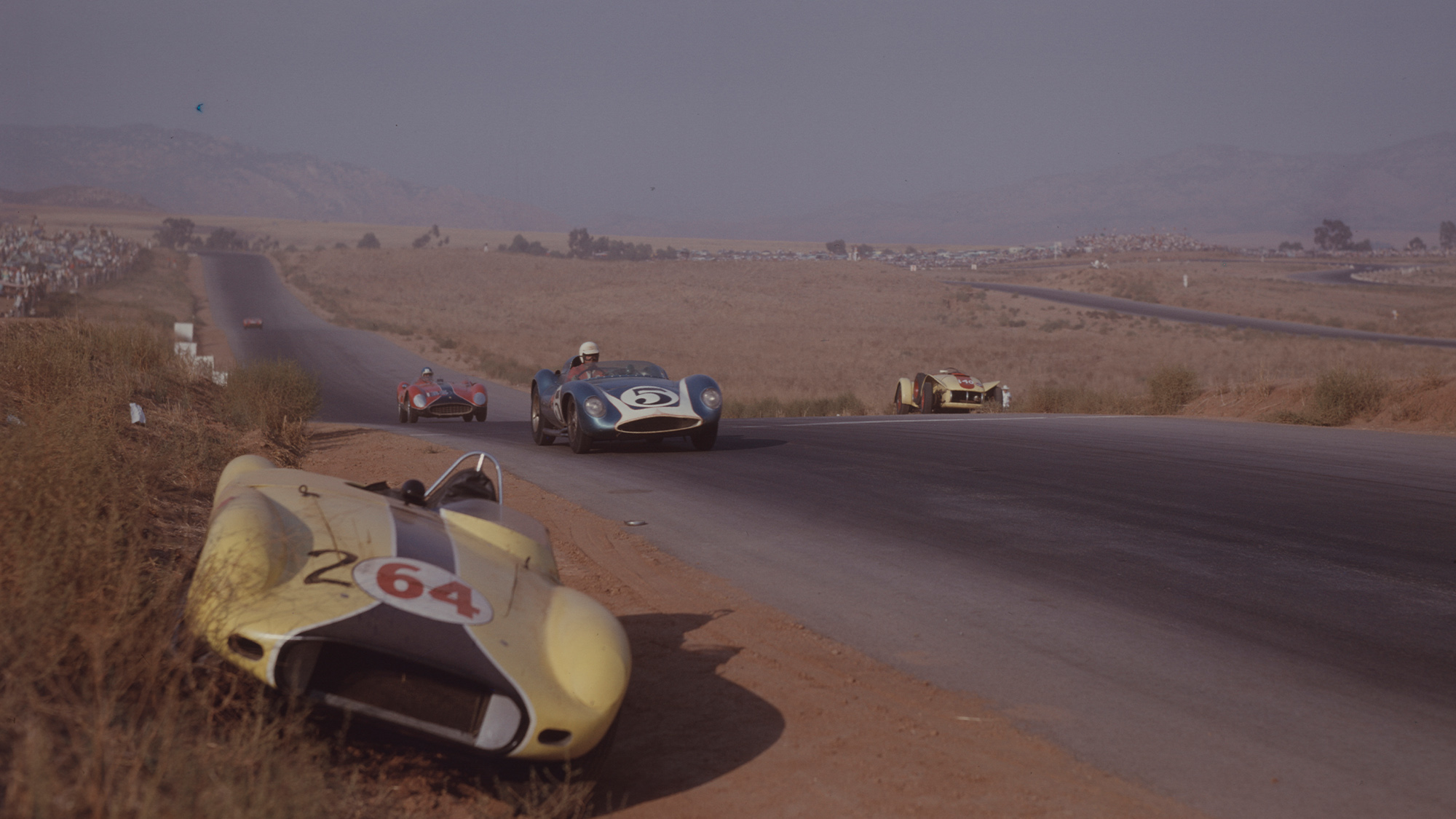 If you’d been at Riverside — an arid, sun-blasted circuit on the edge of Los Angeles — for the US Grand Prix for Sports Cars in 1958, you would have seen local stars such as Daigh, Dan Gurney, Phil Hill, Richie Ginther and Indy 500 winner Troy Ruttman in machinery ranging from a factory Ferrari to a Mercedes-Benz 300 SL packing a small-block Chevy.

This was the heyday of the all-American road-racing specials, not just the Scarab but mongrels like Max Balchowsky’s Ol’ Yeller and Ak Miller’s Caballo de Hiero. But L.A. was also home to the best-known Indy car shops of the era, and the majority of the midgets raced in American came out the Kurtis-Kraft factory in nearby Glendale. Hell, even the lowly go-kart was a product of SoCal ingenuity in the 1950s.

“For me, it really was the Golden Age of racing,” Balcaen says, “and I was right in the thick of it.”