Neither car builder Ken Schmidt nor car owner Tom McIntyre have been to Goodwood before, but they and their 1932 Ford Model A three-window coupe – a stunning modern creation reflecting the uniquely old-school philosophy of the celebrated Rolling Bones Hot Rod Shop in New York – ought to feel right at home at this year’s edition of the Revival.

Later this month, about 70 hot rods are scheduled to be showcased in “Gasoline Alley,” the hot rod-themed section of Goodwood. In honour of the 90th anniversary of the iconic Deuce, the Revival team hopes to have 32 ’32s performing smoky burnouts on a mock dragstrip that’s been dubbed the Earl’s Raceway.

“We think there’s never been this many ’32 Fords together in the U.K.,” says Greg Waters, who’s coordinating the hot rod meet-up. “The noise alone should wake up the sleepy West Sussex countryside.”

The most spectacular sounds will probably emanate from six pugnacious production-based dragsters known as gassers. But the cars generating the most oohs and ahs will more likely be as many as a dozen Rolling Bones built by Schmidt and his partner, Keith Cornell – works of contemporary mechanical art masquerading as relics of a bygone era.

“The cars that they build look like they’ve been driven hundreds of thousands of miles and been raced every chance they got,” McIntyre says. “And they don’t put mufflers on them, so they have the right sound as well as the right look.”

McIntyre owns a sterling collection of vintage cars, including road racers such as the Mickey Thompson Z06 Sting Ray originally fitted with a 427-cubic-inch Mystery Motor and the Donohue-Penske Camaro that won the Trans-Am championship in 1968. (He raced it last month at the Rolex Monterey Motorsports Reunion). But he grew up in Southern California in the 1960s, when, as he puts it, “You couldn’t help but get bitten by the hot rod bug.” 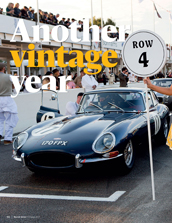 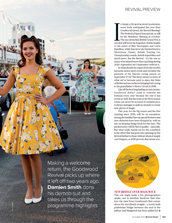 Is there a UK motor sport happening more hotly anticipated this year than Goodwood’s jewel, the Revival Meeting? The Festival of Speed was special, as will be the Members’ Meeting…

About two decades ago, while attending an open house the night before the annual L.A. Roadsters Show, McIntyre’s attention gravitated to a pair of Deuce coupes – built by Cornell and Schmidt, he discovered later – that were throwbacks to the cars that had raced on the dry lakes of the Mojave Desert after World War II.

“There’s something magnetic about the style and substance of their cars, almost beyond description,” McIntyre says. “The changes are very subtle, and a lot of people don’t notice them, but they’re necessary to achieve a certain ride height or a certain rake or a certain proportion of the body to the wheelbase.”

At the turn of the century, the most prominent player in hot rodding was Boyd Coddington, whose name had become synonymous with show car-style street-rods with shiny paint and machined aluminum billet accents. Schmidt and Cornell were in the vanguard of a radical movement to return hot rodding to its roots – using DIY engineering and authentic old parts to transform cheap, prosaic transportation into deeply personal machines that melded speed with style.

“Hot rods had been neutered,” Schmidt says. “You decided which body you wanted, which red, which 350 [cubic inch engine], which wheels. They were all the same. They were all ‘safe.’ We built a couple of ’32 coupes – bare bones, in your face, loud, nasty, obnoxious traditional hot rods. We went to the York Nationals. The entire place was in shock. I had an offer to buy my car before I got out of it. Then it was, ‘Would you build me one?’”

In fact, that’s exactly what McIntyre asked Cornell and Schmidt when he met them – and they refused. They were enthusiasts, they insisted, not professional builders. But McIntyre and fellow collector Dennis Varni persisted, and Schmidt and Cornell eventually relented.
Rolling Bones opened in 2004 in an old cow barn in a rural hamlet in upstate New York.

“It’s a three-man shop,” Schmidt says. “We build two cars a year, and we have a five-year waiting list. We turn down jobs once a week. Most people go to a shop to get their dream car. They come to us to get OUR car.”

McIntyre provided Cornell and Schmidt with a three-window coupe body and a 241-cubic-inch Dodge Red Ram Hemi dating back to 1954, then stepped away from the project. “I didn’t want to have any influence on it,” he says. “I wanted them to build the kind of car they would build for themselves.”

Schmidt and Cornell bobbed and pinched a pair of frame rails they found rusting in a yard. They accessorized the fenderless body with dozens of louvers and a belly pan. The top was chopped, and the windshield – a mere four inches tall – was laid back. Mechanical upgrades included friction shocks and a Halibrand quick-change.

Tying a bow on the package were signature touches such as a patinated finish – with a ghostly “78c” on the doors to reflect the coupe’s racing heritage – and a grinning-skull hood ornament.

Looks and attitude aside, Rolling Bones hot rods are designed to be driven – every day and everywhere. So when McIntyre took possession of his brand-new coupe in 2013, he joined Schmidt and Cornell on their annual cross-country pilgrimage to Bonneville, Utah, where they hammer their cars on the salt flats.

That meant covering 3,300 miles in mid-summer with no air conditioning, no power steering, no sophisticated electronics. No problem. “I almost wanted to pull a trailer behind me with spare parts,” McIntyre admits. “But I didn’t do a darn thing on the trip. Absolutely nothing went wrong. Every time I turned the key, it started right up.”

Because of the pandemic, McIntyre and Schmidt haven’t decided whether they’ll be travelling to Goodwood. But the coupe is already in England, and they’re not worried about it.

“Our cars aren’t show cars,” Schmidt says. “They look just as good dirty as they do clean – maybe even better. I want you to look at one of our cars and say, ‘Man, I want to get into that son of a bitch and go for a ride.’”