Ask a baby boomer about Trans-Am racing, and he’ll talk your ear off about Mark Donohue, Parnelli Jones and production-based Mustang and Camaro pony cars. Ask a Gen Xer,  and he’ll regale you with tales about Willy T. Ribbs, Tommy Kendall and tube-frame chassis with silhouette bodies resembling Corvettes and XR4Tis. Ask a millennial, and –

Wait a sec. Trans-Am is still around?

Hell, yes. Now billing itself as “America’s Road Racing Series,” the Trans Am (sans hyphen these days) championship presented by Pirelli (supplier of the spec tires) offers some of the best racing on the planet. In fact, the top-of-the-line TA cars are the answers to the pleas that fans have been making for decades to the largely unresponsive powers that be.

“The cars are phenomenal,” says Chris Dyson, a second-generation racer who’s won championships in prototypes and who also races hairy-chested sprint cars on dirt tracks. “They’re throwbacks to an age when cars had more power than grip and the driver was the ultimate differentiator. Trans Am represents the essence of racing as I knew it growing up, which is the driver as the central player in taming the beast.”

Another Trans Am proselytizer is former Trans-Am champion Boris Said, whose resume ranges from showroom stock to Daytona prototypes, with some noteworthy forays into hulking NASCAR stock cars. “They’re the best cars I’ve ever raced,” he says. “They’re old school. The one I run has a gated shifter. I don’t have any ABS, and I don’t have any traction control. But they have 860 horsepower, and they weigh only 2600 pounds, so they just fly.”

Trans Am offers a cost-effective alternative to the ultra-expensive factory-built cars marketed through customer-racing programs. Based on tube-frame chassis and honking American pushrod V-8s, the cars will run with much more sophisticated – and far pricier – GT3 thoroughbreds that are sold by manufacturers as turnkey products. But they’re still struggling to find an audience comparable to the ones the series commanded during its glory years.

The first race of what was then known as the Trans-American Sedan Championship, at Sebring in 1966, was won by future Formula 1 World Champion Jochen Rindt, with Over 2.0-litre class honours going to Bob Tullius, of Group 44 fame. But the series quickly became synonymous with factory-backed pony cars. There was also a 2.5-litre championship, famously won by John Morton in a funky BRE Datsun 510.

Trans-Am’s profile rose and fell over the next three decades, depending on the participation – or lack thereof – of car manufacturers ranging from General Motors to Audi. But by 2006, the factories had disappeared, and so had most of the competitors. The entire schedule consisted of two races. At the end of the “season,” the series was euthanized.

Low cost and fiercely competitive TA2 category is the most popular

But ground-pounding V-8-powered door-slammers never went out of style. So in 2009, SCCA Pro Racing revived Trans Am, based on club-racing GT-1 rules. Two years later, a new management team took over under the Trans Am Race Company banner. In 2017, controlling interest in the series was bought by Tony Parella, an enthusiast who already owned the SVRA vintage-racing organization.

It’s gone down as one of the most renowned mano a mano duels in American motor racing history. Parnelli Jones and Mark Donohue battled furiously for Trans-Am supremacy in 1969…

With SCCA Pro Racing continuing to sanction races and provide operational support, the series has grown slowly but steadily. Trans Am now features six classes. The most popular is the second-tier category, TA2, which features a semi-spec rules package for cars making nearly 500 horsepower. Because it’s so affordable, TA2 has attracted a slew of newcomers – including NASCAR tyros looking to hone their road-racing skills – and the action on track has been fierce.

But TA remains the king of the Trans Am jungle. The 358-cubic-inch engines generally come from NASCAR shops that continue to crank out mega-hp carbureted motors. (Fuel injection is permitted only in NASCAR’s top-level Cup series.) The chassis feature live rear axles and bodywork based on current Mustangs, Challengers, Camaros and Corvettes. The cars go from 0 to 60 in 3 seconds and max out around 190 miles per hour.

“They’re staggeringly powerful but incredibly well balanced with good mechanical grip and not overly reliant on downforce,” Dyson says. “Managing the torque is probably my biggest assignment every time I get in the car. It’s very much the old school mentality of driving: If you’re not fast enough, you’ve got to get better.” 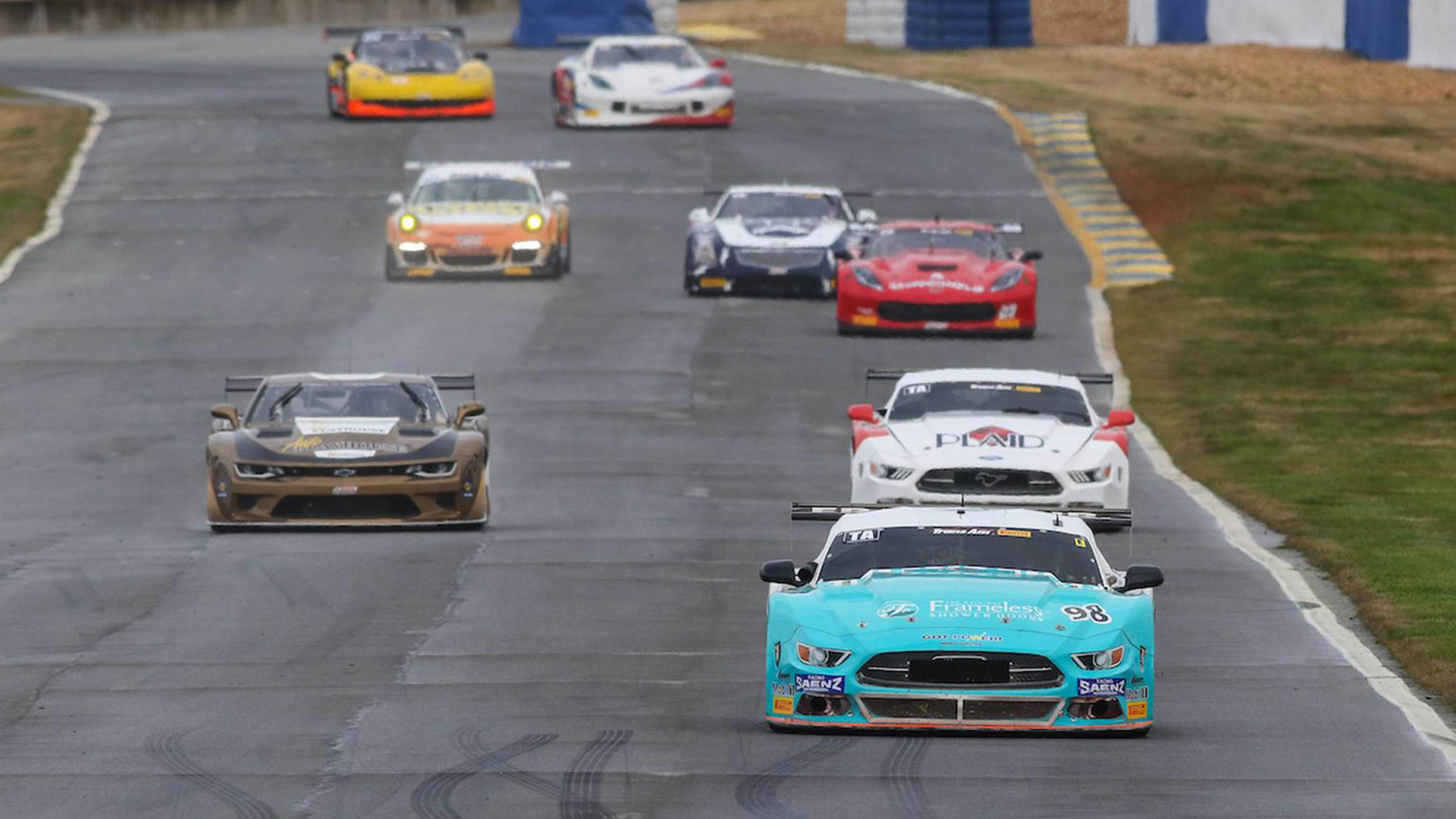 The outrageous grunt coupled with last-gen technology might lead you to believe that the cars require a heavy hand (and foot). Quite the opposite, according to Said.

“They take a lot of finesse,” he says. “They’re not nimble, like a GT3 car. But when I’m driving a GT3 car, I feel like a butcher. There’s no heel and toe. There’s not enough horsepower to really get into trouble. You just go as deep as you can in the brake zone and push on the pedal as hard as you can to get in the ABS, then you just slam on the gas pedal and let the traction control do all the work. If I drove a GT3 car like I drive a Trans Am car, I’d be a second slower.”

This year, the championship looks likely to be a shootout between Dyson, who won the season-opener at Sebring, and defending champion Ernie Francis Jr., who’s seeking his eighth (!) consecutive title. Alas, the series doesn’t have a TV deal, even in the States, but races are streamed live and broadcasts can be viewed after the fact on YouTube. Not always easy to find, but worth the effort if you want to see road racing stripped down to its essentials.