Regular readers of the Racer website probably noticed that “Miller’s Mailbag” – the weekly column wherein longtime IndyCar scribe Robin Miller answers readers’ burning questions – has been missing for more than a month. A few days ago, Miller himself explained his absence in “A letter to the Racer nation.”

“I almost died two weeks ago with a nasty infection and fever, but my little sister, her best friend and a neighbour saved my life, and rushed me to the hospital,” he wrote. “Facing your mortality isn’t something to think about every day or dwell on, because you’re alive and death isn’t in your daily mindset. But when cancer and leukaemia decide to gang up on you, then everything changes, and you are suddenly lining up in a heat race with The Grim Reaper.”

At 71, Miller is the dean of American open-wheel-racing journalists. But more than that, he’s probably the best-known – and, without question, the most polarising – motor sport writer in the country. He’s reported countless scoops, written for publications ranging from Car and Driver to Motor Sport, and worked as a TV broadcaster and pundit.

“I quit caring if anybody likes me when I was 21”

What sets him apart from his colleagues is his willingness to speak truth to power. His vitriolic columns about Tony George and the Indy Racing League were – in his telling, at least – a major factor in his getting fired by The Indianapolis Star after 33 years as a sportswriter. Proving that he could piss off people on both sides of the Split, his media credentials were yanked by Champ Car, then IRL’s rival, after he wrote an unflattering but prescient doom-and-gloom piece about the future of the series.

“A lot of people say, ‘I’ve got a wife and a couple of kids, and I’m going to ride the gravy train and write the same pabulum every week,’” Miller once told me. “Whereas me, I’ve never married. I’m a degenerate gambler. I don’t care if anybody likes me. I quit caring about that when I was 21 years old.”

In the defining incident of his career, during the run-up to the Indy 500 in 1981, Miller accused A.J. Foyt – in print – of employing several long-rumoured race-car cheats during his career. An enraged Foyt slapped Miller upside the head, and the Star printed a retraction after a libel suit was settled out of court. Yet today, Foyt is among Miller’s biggest boosters.

How Jim Clark won round Indy

He was the face of the radical movement that changed open-wheel racing in the USA forever, and yet he did it with a style and a grace that disarmed his…

May 2008 Issue
By Robin Miller

“We got to be really good friends over the years because we respect each other,” says Foyt, who plans to have dinner with Miller next week. “Like a lot of people, I didn’t like what Robin wrote at first. But after awhile, I realized that 99 percent of what he wrote was true. I don’t know where in the hell he finds out all the crap he finds. He had a knack for figuring it out or guessing it, and when he guessed, he usually guessed right.”

As a fellow journalist, I’ve been wowed by Miller’s ability to ferret out information from his wide-ranging sources and his willingness to tell the truth no matter how ugly or unpopular it might be. But what I appreciate most about him is that he is, at heart, a fan himself, and he serves, if only unconsciously, as an advocate for the sport he loves so fervently.

Miller is a home-grown Indiana boy who has lived the racing life rather than merely observing it from the media centre. He attended his first Indy 500 when he was 8, and after flunking out of college, he worked briefly at the Speedway for his hero, Jim Hurtubise.

While he was covering the IndyCar beat, Miller bought a midget from Merle Bettenhausen and campaigned it on the Midwestern circuit. He wasn’t a badass – his highest accolade – but he was quick enough to run third in the Hut Hundred before his engine puked, and in his last start, he beat midget hall-of-famer Stan Fox in a heat race.

“First and foremost, he’s a fan… He always said it the way he saw it.”

Along the way, Miller traveled with other racers from track to track. He ate with them, roomed with them, partied with them. Inevitably, he absorbed the ethos of racing, learned the lingo and cataloged the lore. Although his career behind the wheel didn’t last long, his experience has informed everything he’s written about the sport.

At the same time, Miller has never lost his passion for racing, especially the blue-collar variety featured at the bullrings dotting the Midwest. About a decade ago, I accompanied him to Eldora Speedway for a sprint car/midget/Silver Crown car show. Because of all the wrecks, the action didn’t end until 1 in the morning, and it was 2 a.m. by the time Miller finished filming his post-race TV stand-up. But he was still buzzing about the races when we straggled back to Indianapolis, shortly before dawn. 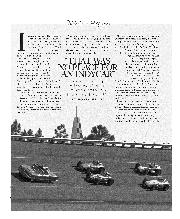 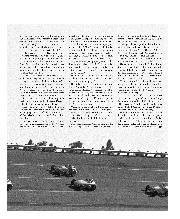 Indycars haven’t run on Daytona’s fearsome banking since their sole ill-fated race there in 1959 Indycars at Daytona. That suggestion today would bring a volley of laughter from drivers, mechanics,…

“First and foremost, he’s a fan of the sport, and, secondly, he reports on it,” says his old friend Mario Andretti. “More than any other journalist, he was persistently THERE. He was not only a conduit from the inside of the sport to the fans, but he was a racer himself. He always had an opinion, and we didn’t always agree. But he always said it the way he saw it.”

The last time I got together with Miller was shortly before the pandemic lockdown, during breakfast at Charlie Brown’s, a famous greasy spoon in Indianapolis whose walls are festooned with racing photos and motor sport paraphernalia. We were sitting with Indy 500 veteran Johnny Parsons, and there was a constant stream of visitors to our table – other retired drivers and mechanics, current race engineers and crew men, plus a never-ending supply of Robin Miller fan. After a half-century in the business, he’s better known than most of the people he covers.

His good bud, publicist extraordinaire Steve Shunck, reports that Miller’s health has been improving since his brush with death. Miller himself says he’s planning to attend the ceremony for his induction into the Motorsports Hall of Fame of America at the end of September.

“I don’t know what the future holds,” he wrote, “but I’m at peace with whatever happens, be it in a year or six months or six weeks or six hours.”