Many of the Monterey Car Week’s main attractions are static. Many, but not all… Laguna Seca hosts racing to suit every taste 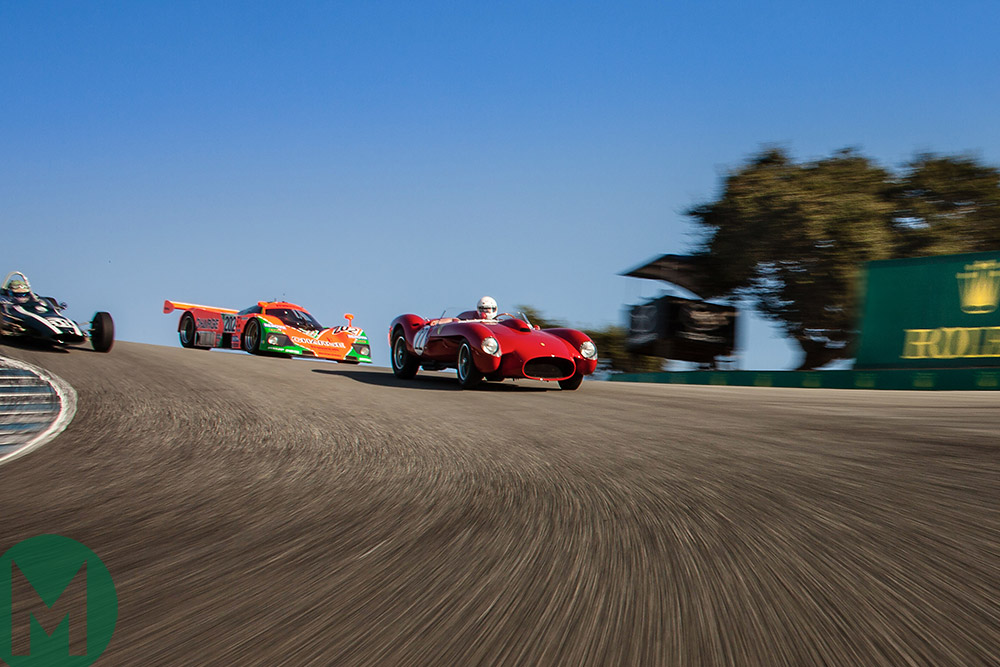 For some, seeing an unparalleled line-up of the world’s greatest collectible cars on the lawn of the Pebble Beach golf club is undoubtedly the highlight of Monterey Car Week – but for others, the real cornerstone of the event is found a short distance away at the Laguna Seca circuit, where a remarkable 550 racing cars gather each year to compete in 15 different groups during four days of high-octane competition.

Called WeatherTech Raceway Laguna Seca since April this year, when the auto accessories giant became headline sponsor, the track was built from scratch in just 60 days in 1957 on the site of a dry lake bed (hence its name).

For the six years prior to that, cars battled it out on a narrow, twisty, forest-flanked circuit adapted from the metalled and unmetalled town streets that served as the Pebble Beach road race course.

It initially proved safe as a venue for the Del Monte Trophy, but in 1956 car customiser and hot rod racer Ernie McAfee was killed when his Ferrari slammed into a tree, prompting the decision to create a purpose-built raceway nearby.

During the past six decades, Laguna Seca (which is managed by the Sports Car Racing Association of the Monterey Peninsula, otherwise known as SCRAMP) has hosted everything from the American Le Mans Series to Formula 5000, MotoGP and the World Superbike Championship, with the track coming to be known the world over for its famous ‘corkscrew’ turn that starts with a blind crest and challenges drivers and riders with an 18-metre elevation drop.

The undisputed highlight of the year, however, is the Rolex Monterey Motorsports Reunion that can trace its roots back to 1974, when historic racing enthusiast Steve Earle organised the inaugural Monterey Historic Automobile Races at Laguna Seca to coincide with the Pebble Beach Concours (which in those days took place in November)

Since day one, Earle made the event open to enthusiasts from across America so long as they could turn up in an interesting, authentic, race proven and period-correct car – parameters that still prevail today.

For European historic racing fans, the event is perhaps best summed up as the Goodwood Festival of Speed, the Goodwood Revival and Le Mans Classic rolled into one, since it combines all-out competition with numerous interesting side events, an open-to-all paddock, chances to meet motorsport legends and, of course, endless car-based retail opportunities.

This year, for example, 1998 and ’99 F1 world champion Mika Häkkinen will drive a series of demonstration laps in a McLaren F1 GTR , while the half-century of Nissan’s official involvement in motor sport is celebrated by its selection as featured marque – making for a golden opportunity to recall the fact that Hollywood star Paul Newman cut his motor sport teeth driving Datsuns and Nissans with the Bob Sharp Racing Team during the early 1970s.

For anyone attending Monterey Classic Week, the Rolex Motorsport Reunion really is a must – as evinced by the fact that the event was recently recognised by the FIA with the award to SCRAMP of the FIA Founding Members Heritage Cup, marking the first time the honour has been bestowed on a US-based motorsport organisation.

If you’re not going to be there to soak up the nostalgia, however, the Raceway souvenir store is offering a limited-edition reproduction of the programme produced for the inaugural 1957 event. Packed with entertaining stories, advertisements and period images of drivers and cars, it will certainly take you back in time – and at a mere $10 it costs little more than a gallon of petrol (a British one, at any rate)

The Rolex Monterey Motorsports Reunion takes place at the WeatherTech Raceway Laguna Seca from Aug 23-Aug 26. Tickets range in price from $60 for a single day if booked in advance to $170 for a four-day pass, with VIP hospitality packages starting at $225. Children aged 15 and under go free if accompanied by an adult. Click here for more.