Six months ago the IndyCar Series had loaded into St Petersburg, Florida, in preparation for its 2020 season opener. Drivers’ motorhomes were parked up, the track markings freshly painted and typical pre-race promotional events were in full swing.

Then, on the Friday of the race weekend, it all came to a juddering halt. Covid restrictions hit and St Pete. was cancelled, along with the next three rounds. IndyCar was off for the foreseeable.

Fast-forward to October and some of the paddock might be forgiven for feeling like it’s all a bit groundhog day. The series has regrouped with a rescheduled championship and now has arrived for ‘St. Pete Take 2’, swapped to the end of the year to become the 2020 season finale. The championship fight is between Ganassi’s seemingly evergreen Scott Dixon and Penske’s all-American racing hero Josef Newgarden.

“I feel like we were definitely prepped and ready to rock for the weekend.”

Dixon is going for his sixth IndyCar title. Already second in the all-time Championship winners list, the New Zealander will be just one title behind seven-time winner AJ Foyt if he wins this weekend. Newgarden is gunning for his third series crown.

As is almost de rigueur in IndyCar, the title battle has come down to the very last race. If there’s one series that knows how to do a final round showdown, this is it. The champion has been crowned at the after the final race for the last 15 years consecutively, the zenith perhaps being in 2015 when six drivers had a shot at title glory. That time it was Dixon who emerged victorious, coming from ninth on the grid to win at Sonoma, tying with long-time championship leader Juan Pablo Montoya on points, but taking the crown by virtue of him having more race wins. 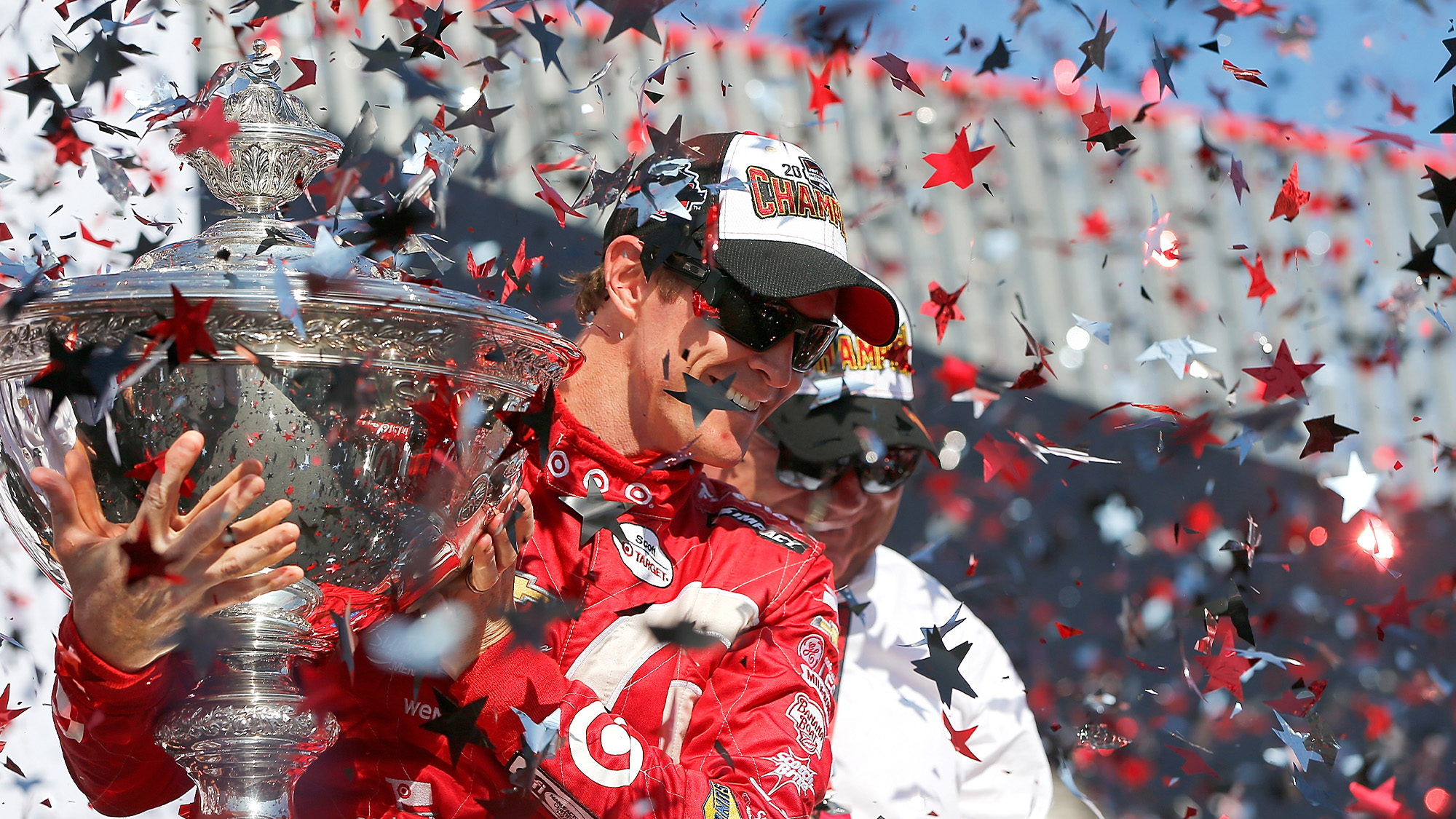 Dixon emerged victorious from the 2015 title-decider

This time, Dixon’s the one in control. To say he has a decent advantage going into the final round would be an understatement. There are 19,872 scoring scenarios for both IndyCar title contenders this weekend, yet only 1 per cent of these result in a Josef Newgarden title win.

Even if Newgarden gets the bonus points for pole, fastest lap and wins the race, a ninth place finish would still be good enough for Dixon to win the driver’s title. However, the ever-optimistic Nashville native isn’t letting it get him down.

“So you’re saying there’s a chance, and that’s all we need!” said Newgarden in the pre-race IndyCar press conference.

“Just go in there and try and win the race – that’s really all I can do. I feel like we were definitely prepped and ready to rock for the weekend.”

It was a startling early season consistency that allowed Dixon to cement his place at the top of the standings. He won the first three races in a row, at Texas, Indianapolis Road Course and Road America before notching up a win and two runner-up places in the next five rounds.

However, one stray right-rear wheel sent Dixon’s season into a tailspin.

“I made a pretty big mistake Mid-Ohio,” says Dixon, “Had I not spun I think it would have been a different scenario going into the last race.” 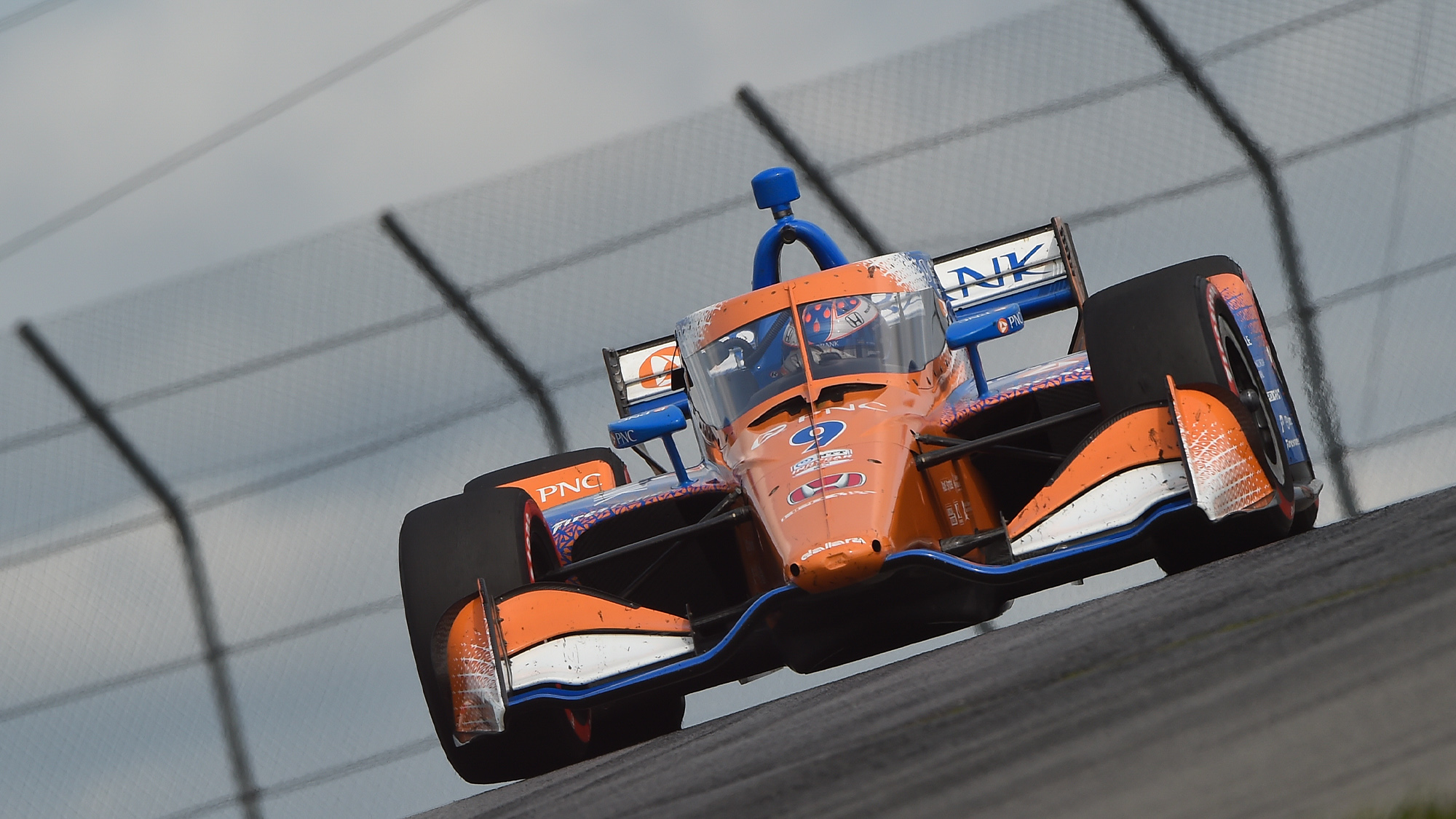 After already finishing 10th at the first round of Mid-Ohio double-header, Dixon’s spin dropped him from fourth to another 10th place finish. A ninth and an eighth in subsequent races haven’t done a great deal to help his cause, whilst a revived Newgarden has taken a first, second, fourth and an eighth in the intervening period.

Penkse’s contender admits that his late-season resurgence in form leaves himself and the team wondering what could have been.

“I’m surprised we’re here to be honest,” the Penske driver observed, “It almost makes it more disappointing looking at the year, now that we’ve caught back to this point. We were in such a deficit, and there was such a hill. We’ve reduced the hill, without a doubt, but it’s still a mountain to climb.”

In discussing his late season dip, Dixon made a salient point on a typically exciting conclusion to the premier US single-seater category.

“I think these adversities, obviously the ups and downs through the season, it’s what makes IndyCar racing. You see these runaways, and then you see them get caught. The situations always come down to the wire which is typical and great to see for the sport, for the fans, for everybody involved.” 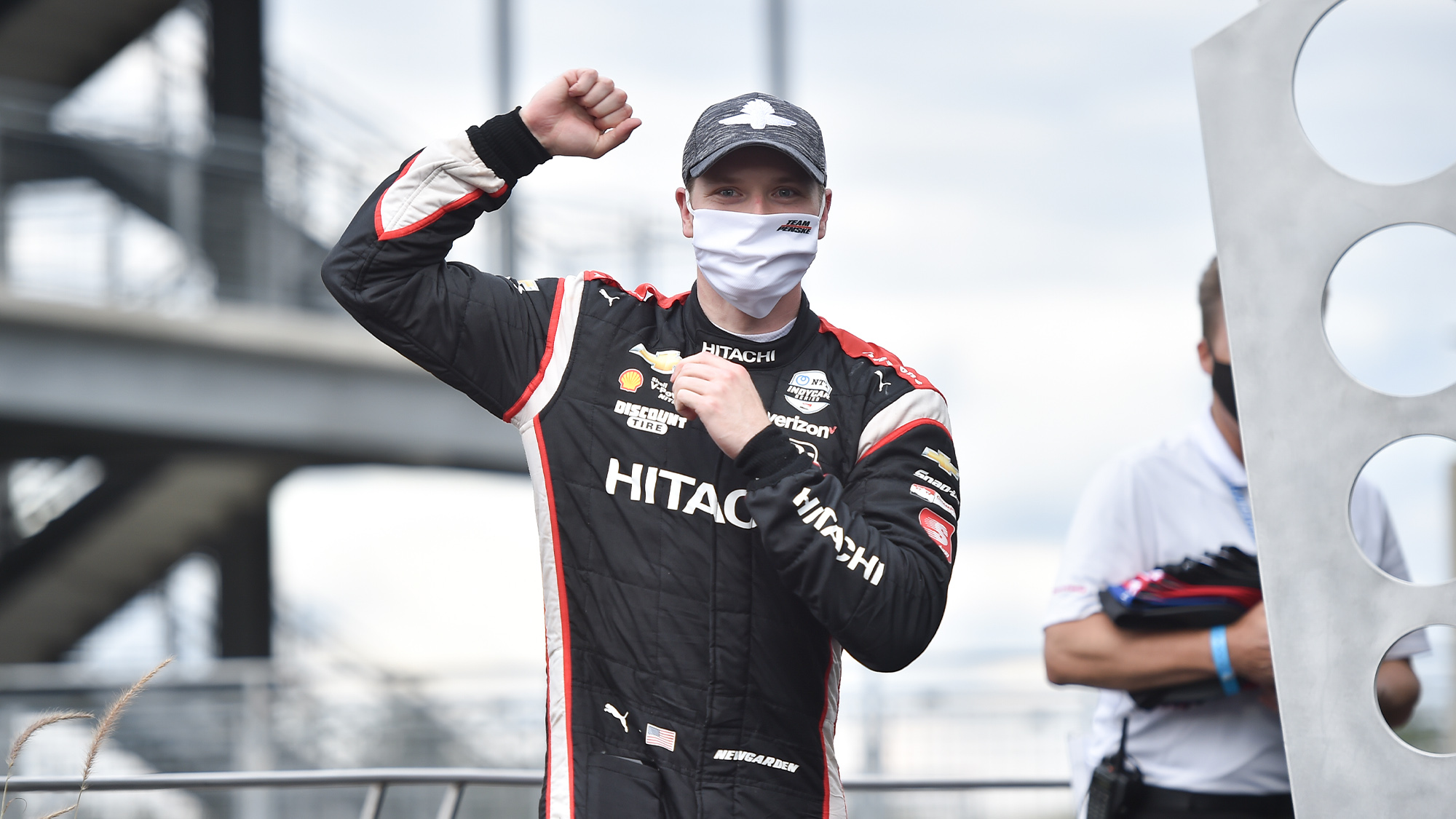 Both drivers highlighted how this St. Petersburg race is a step into the unknown, being the first street circuit race of the season on a schedule which would normally feature four. Set-ups are yet to be refined and the Aeroscreen, deemed to be a success thus far this season, has never been run on a street circuit. One result could be sizeable variations in tyre wear for the series’ two compounds and differing approach to race strategy.

“The 2020 street course tyre seemed to have a tonne more grip (than last year’s)” notes Dixon, “Does that actually alter the difference between the black (primary compound) and the red (softer alternative)? We only got to test the black.

“I think everybody would be pretty interested to see how that plays out. Tyre deg[radation] could be a real thing for both. Last year [at St. Pete] that black tyre was definitely preferred because the red didn’t last. If it’s going to be closer, it might not be a tight (on fuel) two stopper; everybody may have to jump to a three stopper. 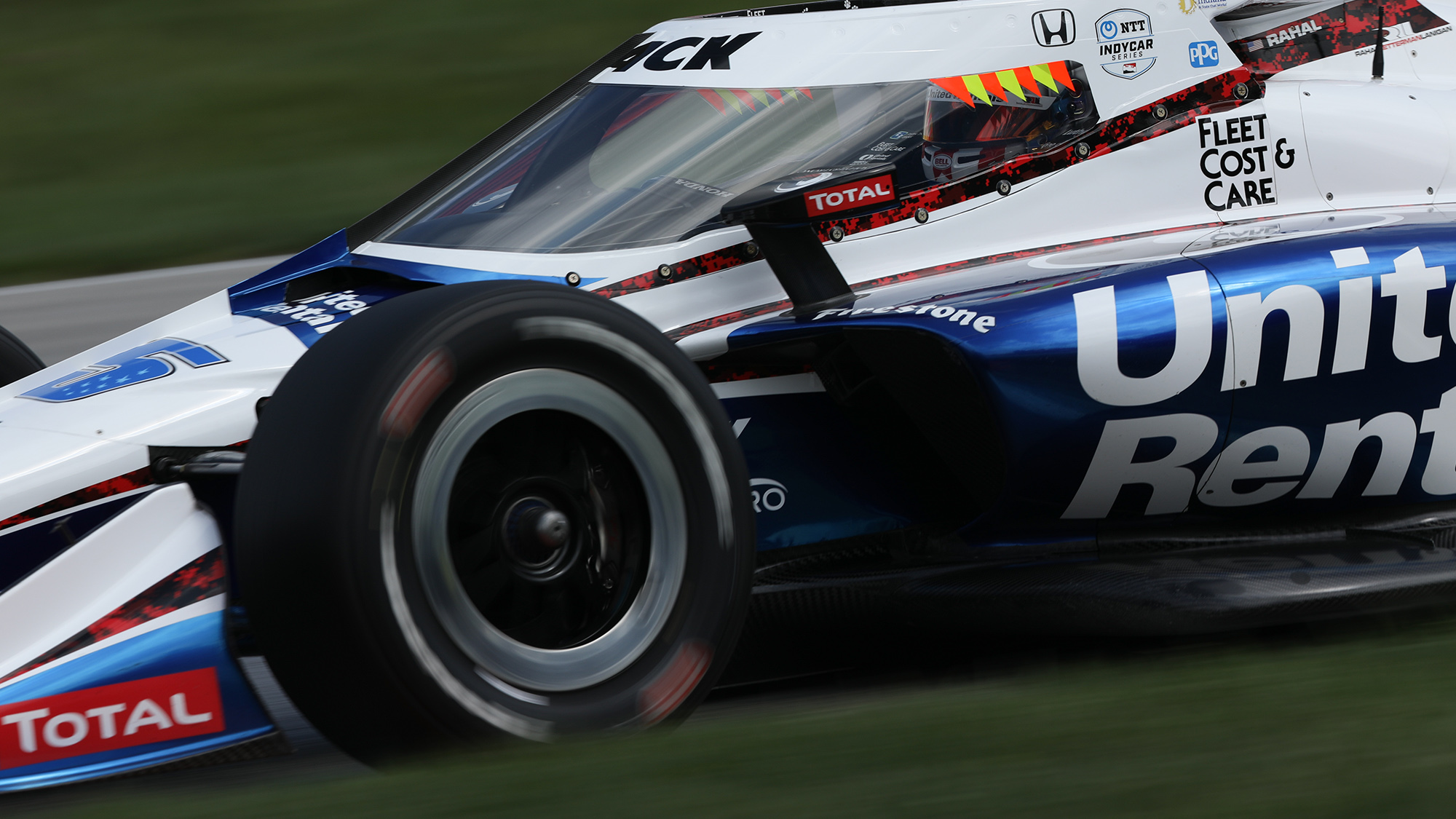 IndyCar teams usually test their street course tyres and set-ups at Sebring. Dixon and Ganassi had a strong test there in February and March in preparation for that cancelled season opener, but so long ago was that and so different were the conditions, the New Zealander feels that information may now be irrelevant.

“There’s always so many unknowns, I think sometimes Sebring can give you a false sense of security going into St. Pete, as we find every year. The only time we ever really found Sebring to be meaningful is when we used to test there in July or August – it’s really hot. You get into the run of the later street course races throughout the year.”

“It’s so compact now on race weekends, with one practice session, there’s a lot to get through. Sometimes you just can’t even get through it you’ve just got to hope that you roll off in any good situation.”

While five-time champion Dixon said he still aims to win the event, the typically calculated Kiwi just needs to bring home a solid finish to take the title.

“You honestly just try to keep that any other race weekend,” notes Dixon, “They all pay the same points, apart from [the] Indy [500].

“I think that’s the constant situation when you’re in any race – analysing the situation that you’re in, who you’re passing. This weekend maybe [it’s] a little more prominent, cars that you maybe are having the opportunity to pass or not, or that you’re racing hard, depending even which team they’re from. That could alter things.”

On the other hand, Newgarden finds himself in the unusual position of chasing the points lead. His previous two championship victories have been won from a position of strength, him defending his points lead as opposed to attacking as the underdog. Whilst feeling more relaxed than usual, he said he won’t change his driving style.

“I don’t feel the pressure so much on our end, as you normally don’t when you’re pursuing versus trying to hold someone off,” says Newgarden.

“I’m just really proud of what we’ve come back from this year and some of the adversities we’ve had to work through. But I’ve never really changed my approach, that’s when you do start to get yourself in a tough situation is when you start trying to compensate.

“It’s all about calculated risk, and just getting the most out of the weekend possible. Of course, that needs to be a win. But if it’s not there, I’m not going to take a sixth-placed car (on pace) and try and overforce (it and) pass five guys in front of me. I’ll probably end up in the wall doing that.”

In spite of his insistences, Newgarden does have form for do-or-die dives and (sometimes botched) last lap overtakes.

Whilst leading the championship at Detroit last season, an over-optimistic overtake on James Hinchcliffe saw Newgarden initiate a three-car pile-up with Alexander Rossi.

If Dixon is the safe pair of hands, then Newgarden seems almost certain to guarantee excitement in his bid for a third IndyCar crown this weekend.