I have to say I was shocked when I read last week’s list of the sport’s greatest drivers. Missing from the list were three of America’s greatest racers of all-time – Tommy Milton, Jimmy Murphy and Frank Lockhart – giants of American national championship racing during the great board-track era of the ‘roaring ‘20s’. 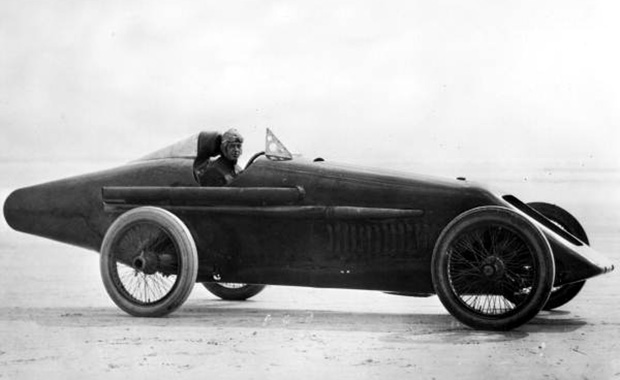 I’ve written about these early legends of American racing before, but allow me to cover some of that ground again so you can properly appreciate why this trio belong at the apogee of motor racing’s pantheon.

Milton and Murphy were Duesenberg team-mates and fierce competitors who dominated the Indy 500 and AAA national championship racing from 1919-25. Blind in one eye from birth, Milton won the 500 in 1921 and ‘23 as well as 21 other AAA championship races between 1917-25. He also won the AAA championship in 1920 and ‘21.

Murphy was Milton’s protégé who began his career as a riding mechanic and won the 1922 Indy 500 plus 18 other AAA races between 1920-24. Murphy also posthumously won the 1924 AAA title and of course led the factory Duesenberg team to a historic victory in the 1921 French GP, beating Ralph de Palma’s Ballott by 15 minutes.

Murphy’s win was the first all-American victory in Grand Prix racing, a feat that would be repeated only once more when Dan Gurney won the 1967 Belgian GP aboard his own AAR Eagle-Weslake F1 car. 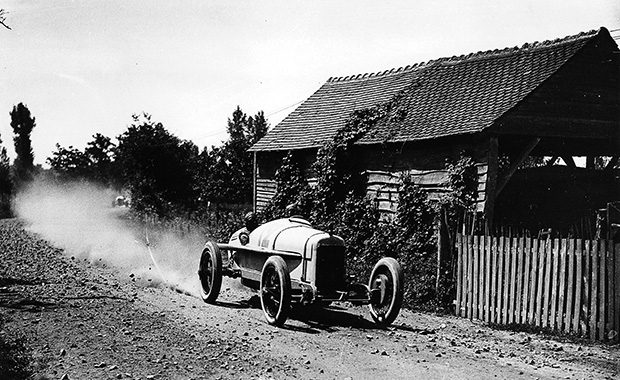 Murphy during the 1921 French Grand Prix at Le Mans

Lockhart arrived on the scene a little later, immediately establishing himself as the man to beat as he won the 1926 Indy 500 in his rookie start and added nine more AAA championship wins over the following two years before crashing to his death on Daytona Beach while trying to set a land speed record in his remarkable little Stutz Black Hawk.

Like most of the great drivers from that era, Milton, Murphy and Lockhart were first-rate mechanics and self-taught engineers. At Daytona Beach in April of 1920 Milton and Murphy drove a twin-engined Duesenberg designed by Milton to break the land speed record. They became the first men to break the 150mph barrier on land.

Meanwhile, the 1920 Indy 500 was won by Gaston Chevrolet’s Monroe/Frontenac. Chevrolet also won that year’s AAA championship despite his death in an accident during the season-closer in November at the 1.25-mile Beverly Hills board track. Seven years later the AAA revised the historic record, adding five races to the 1920 series and declaring Milton that year’s champion. The AAA’s revised rankings made Murphy the championship runner-up and dropped Chevrolet to third.

Milton was enraged that the Duesenberg brothers had allowed Murphy to drive his twin-engine land speed record car at Daytona before Milton could arrive to test his creation. Murphy stole Milton’s thunder by breaking the 150mph barrier before his team-mate had his chance and as a result Milton joined the Frontenac team for the 1921 season. 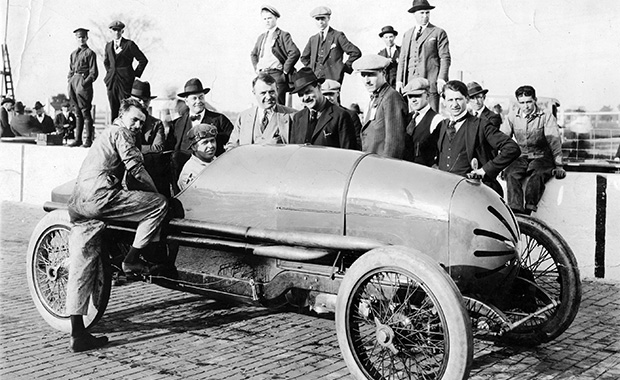 Milton in his Frontenac before the start of the 1921 Indy 500. Credit: Indianapolis Motor Speedway

Milton took over the deceased Chevrolet’s seat and comfortably won the 1921 Indy 500 after Ralph De Palma’s Ballot blew its engine. Murphy crashed in the 500 but the following month the Duesenberg team sailed to France to compete in the French Grand Prix where Murphy scored his historic victory.

Murphy and the Duesenberg team missed three AAA races because of their trip to Europe so that Milton built an insurmountable championship lead. Milton won that year’s AAA title with Murphy finishing fourth in points. Milton won the 1921 title aboard a variety of cars, driving his own Durant with both Duesenberg and Miller engines as well as a factory Frontenac.

Milton’s results prompted Murphy to buy a Miller engine and install it in his Duesenberg, creating the Murphy Special. In this car he dominated the ‘22 Indy 500, qualifying on the pole and leading most of the race to win at record speed. Murphy easily beat Milton to the championship, winning seven races to Milton’s four wins.

In 1923 Milton was on the pole at Indianapolis and led most of the way to win with Murphy finishing third, but neither enjoyed very good seasons. Murphy won two early-season races but his challenge for the championship was blunted by another foray to Europe in the fall to compete in the Italian GP at Monza where he finished third. Murphy was beaten to that year’s AAA title by Eddie Hearne while Milton failed to win another race after Indy and finished fifth in the championship. 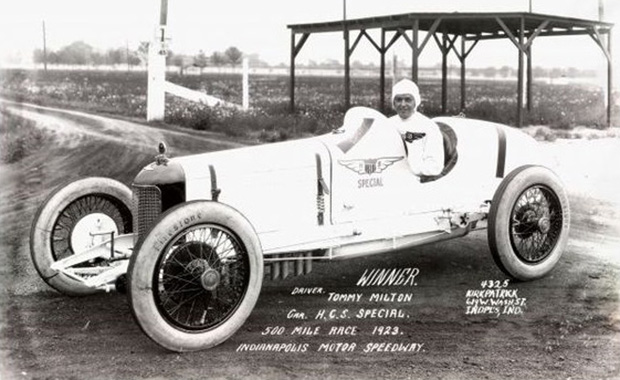 The following year Murphy qualified on the pole at Indianapolis and led the race before he was overwhelmed by Joe Boyer in one of the new supercharged Duesenbergs. Veteran Earl Cooper finished second as Murphy fell to third because of tyre troubles but after the Indy 500 he won three races in a row and took control of the year’s championship before he was killed in a dirt track race at Syracuse, New York in September. So dominant was Murphy that year that he still won the championship even though there were still three races left to run after his death.

Milton continued to race through 1927. He won the season-opener in 1925 and finished second to Pete DePaolo in that year’s championship but wasn’t a serious factor in the following two years before retiring at the end of 1927. Milton was chief steward at Indianapolis for many years but died from self-inflicted gunshot wounds in 1962 at 68 years of age after suffering in his later years from burns received in a 1919 accident.

Frank Lockhart became the youngest winner of the Indy 500 at the time in his first try at just 24 in 1926. Lockhart started racing in 1923 when he was 20 years old driving his own modified Model T Ford. Running on dirt tracks in Southern California he immediately showed his talent and in 1925 Harry Miller gave Lockhart a 3-litre Miller dirt racer with which young Frank scorched the west coast’s dirt tracks. Miller hired Lockhart as a back-up or relief driver for the 1926 Indy 500 but before qualifying Lockhart replaced independent Miller driver Pete Kreis who was sick with the flu. 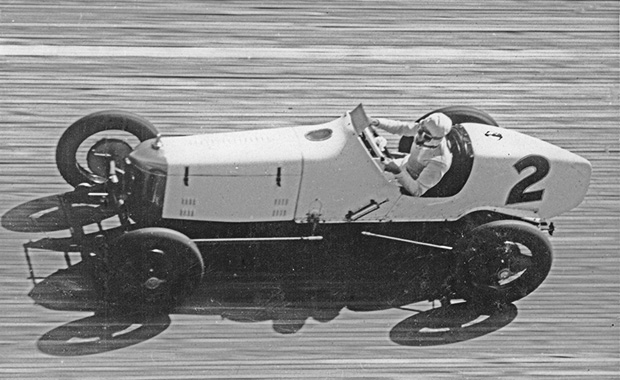 On race day Lockhart quickly moved up the field, taking the lead before the race was interrupted by rain. After a restart Lockhart battled with Harry Hartz who would go on to win that’s year’s AAA championship but Hartz flubbed a pitstop, leaving his ignition turned off. It was Lockhart’s opportunity to run away and he was leading by two laps when the race was cut short by a second bout of rain after 400 miles.

With his Indy prize money Lockhart bought his own cars and started modifying them in ways that upset Harry Miller, but Lockhart pushed on making his own improvements to engines and superchargers. Among other things Lockhart devised an intercooler for his supercharger which gave more power than the conventional Miller system and he went on to win nine more AAA Championship races over the next 17 months, establishing himself as the most feared driver of the times.

He also won another 10 non-championship races on dirt tracks during this time and in May of 1927 on the 1.5-mile Atlantic City board track, Lockhart set a qualifying record of 147.729 mph with his supercharged 1.5 litre Miller. Thirty-three years would pass before any driver turned a faster lap on an American superspeedway.

At Indianapolis in 1927 Lockhart qualified on the pole at a record-setting 120.1mph, the first man to break the 120mph mark at the giant 2.5 mile oval. In the race he ran away on his own, leading 109 laps before his engine threw a connecting rod. During the second half of the season Lockhart won five of six races in a row but was beaten to the AAA title by Pete DePaolo. 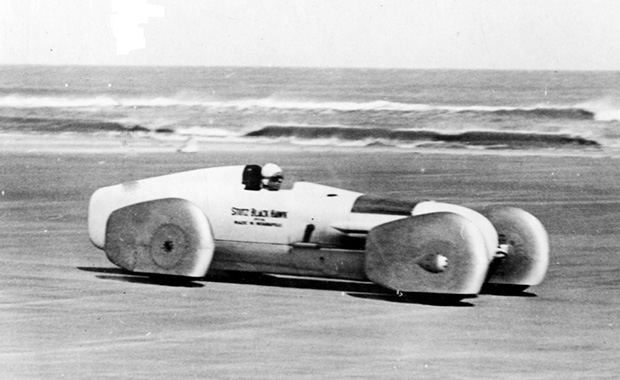 But Lockhart didn’t make it to the 1928 Indy 500, crashing to his death on April 25 while trying to set the land speed record on Daytona Beach aboard the remarkable twin-supercharged V16 Stutz Black Hawk which he himself had designed and built. The elegantly streamlined, 2700lb car represented a revolution in size compared to the lumbering behemoths which dominated the record runs of those days in the hands of Englishmen Henry Segrave and Sir Malcolm Campbell and American Ray Keech.

Lockhart first ran the Black Hawk on the sands of Daytona in adverse weather on February 28, 1928, only to crash into the sea. Two months later he was back for another try but a rear tyre exploded while he was doing an estimated 225mph. The Black Hawk snapped sideways then tumbled into a lurid series of roll-overs. This time there was no escape. The great Lockhart’s life was over at a mere 26 years of age.

It can be argued that no other American driver achieved more in such a short space of time and there’s no question of the high ground Milton, Murphy and Lockhart occupy in motor racing’s history.