Carl Haas has passed away aged 86 after a long struggle with Alzheimer’s disease. Chicago-based Haas was one of the major figures in American racing over the past half century. He was one of the USA’s most successful team owners, co-owning Newman/Haas Racing from 1983 to 2011 and prior to that running his own cars in the Can-Am and Formula 5000 series.

Newman/Haas is ranked second only to Team Penske in IndyCar history with a record of 107 wins and 109 poles. Haas’s cars also won 39 Can-Am and F5000 races as well as nine championships. He also ran a NASCAR team, promoted races at Milwaukee and was for many years the chairman of the SCCA’s board of governors. Haas was also one of America’s most prolific racing car salesmen, selling all types of Lolas from the late ’60s through the turn of the century. 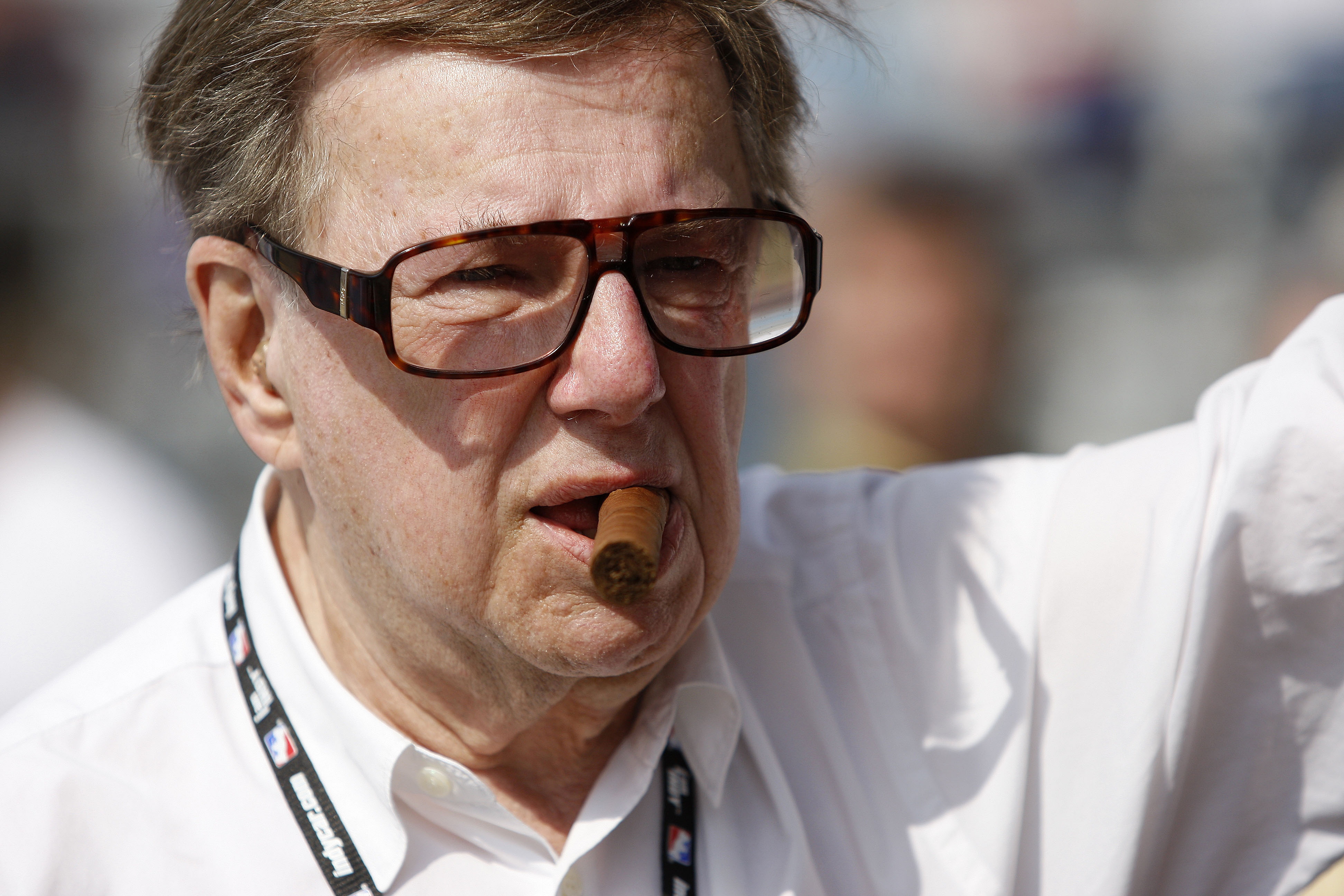 Mario Andretti spent the final 12 years of his career at Newman/Haas and was the team’s only driver from 1983 to 1988. Andretti won the last of his four IndyCar championships with Newman/Haas in 1984.

“I felt very much a part of Newman/Haas,” Mario says. “I felt like I could make suggestions and they would be heard and that’s not a statement that I could have possibly made driving for anyone else. Whenever I would make suggestions about what we needed they were listened to and often adopted. With Carl, it seemed there was a feeling of oneness and I felt I contributed more than just as a driver.

“I really found a home to finish my career at Newman/Haas. I was always treated with the utmost respect and there was a great feeling among the team. We surrounded ourselves with a bunch of racers and there’s nothing better than that. We all recognized the importance of that and that’s what gave me life. In the twilight of my career I was as excited as I was at the beginning of my career. There were certain limitations that were obvious, but that environment gave me longevity, no question about it.

“They gave me the opportunity to stay competitive and to feel like I was still contributing and not just riding along. I always felt I had that going for me with Newman/Haas.

“Paul (Newman) was a great support system. He was a real strong shoulder to lean on at any time and a security blanket for the entire team. Paul was so sensitive to the psychological needs of the team and everyone in the team, especially the key members, felt so supportive of him, and they showed that.

“All these things worked in a very positive way. Everybody had a function and contributed in one way or another to something that was very positive. You don’t get results by luck only. You might get some sporadic results, but consistent performance comes from the effort of everyone over a long period of time. Carl was the leader and everyone contributed.” 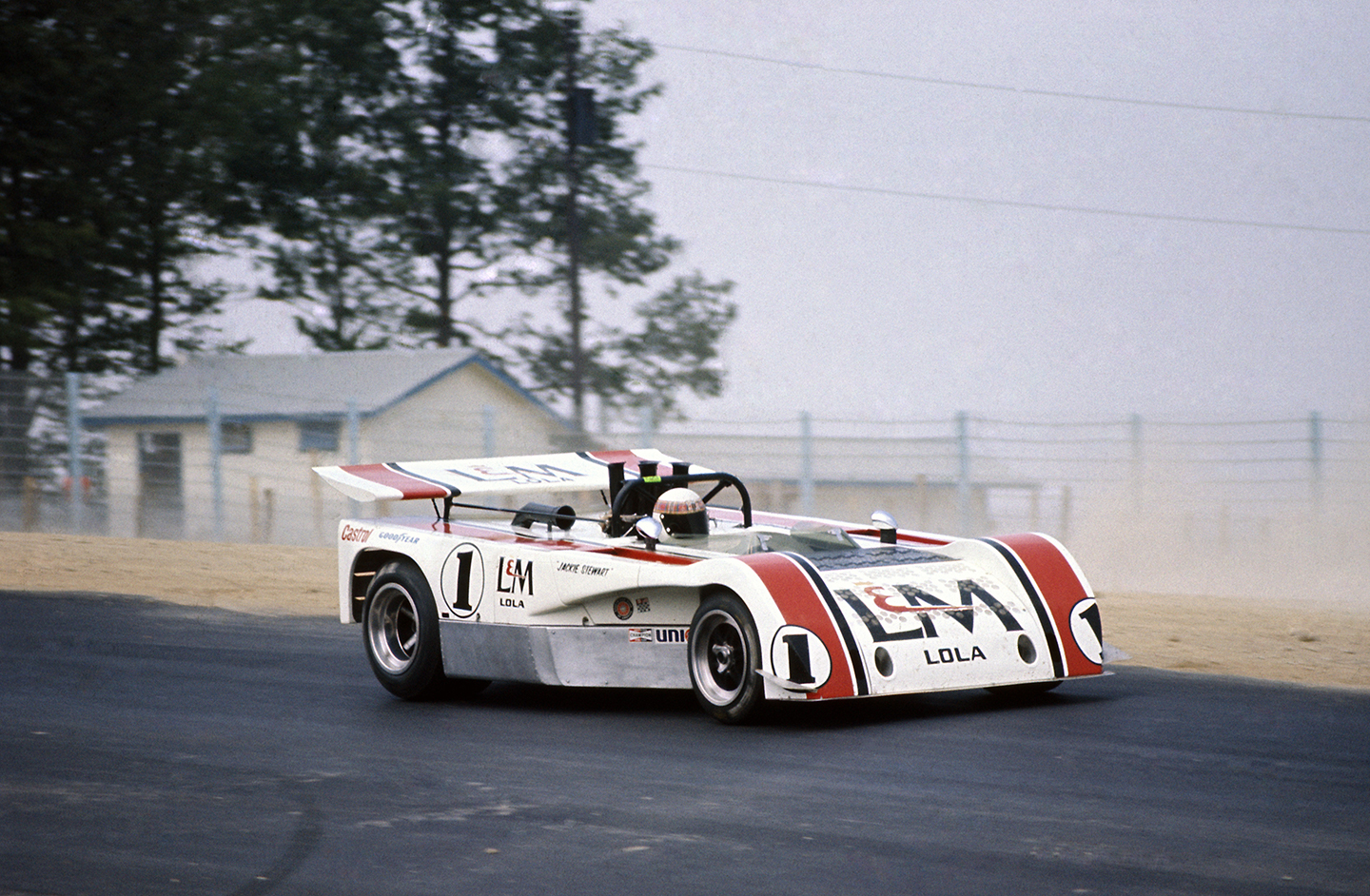 Jackie Stewart drove Haas’s Lola T260 Can-Am car in 1971. Stewart won at St. Jovite and Mid-Ohio. “Berni and Carl ran their team like a family,” Stewart said. “They really cared about their drivers and the people who worked for them. We were always together socially and regularly had dinners together. They had one of those streamline motorhomes of that era, it was very robust but not as opulent as the McLaren motorhome.

“I was flying to the States from Geneva and there was a Davidov shop in Geneva. In those days they didn’t allow you to bring Cuban cigars into the United States, so I would occasionally bring him some cigars which he absolutely adored.”

Stewart was touched by Carl’s deep emotional commitment to his race team and offered him the finest compliment of all by drawing comparisons to Tyrrell, with whom he won three Formula 1 World Championships. “Some people in the team called Carl ‘Shakey’ because he really did shake at times. He would get very, very nervous before and during the races and, of course, he went through the whole procedure of blessing the car before the race. It was almost superstitious as well as being spiritual, perhaps.

“I loved driving for Carl and Berni,” Stewart added. “It was like Ken and Norah. It was the same kind of relationship. Carl and Berni had a great team of mechanics. There was a great spirit in the team and despite the problems with the car it was a very nice experience.

“The team was a very keen winner. Most of Carl’s life, whether it was Can-Am or Formula 5000 or Indy cars, he always had winning drivers and teams. And he’s been a tremendous stalwart of motor sports and particularly road racing in America. To many people in Europe Carl Haas represents American road racing more than any other man.”

Jacky Ickx drove Haas’s Lola T333CS Can-Am car in 1979, winning five of 10 races to take the championship. “Frankly, Carl and Berni are like the fingers of your hand,” Ickx said. “They did the job together and it was a beautiful partnership. It was a pleasure I had to be with them because it was very exceptional. It was really nice. It was like Ken and Norah Tyrrell in a way with a very similar attitude. They were very charming people. I would say maybe they don’t belong to the modern world. 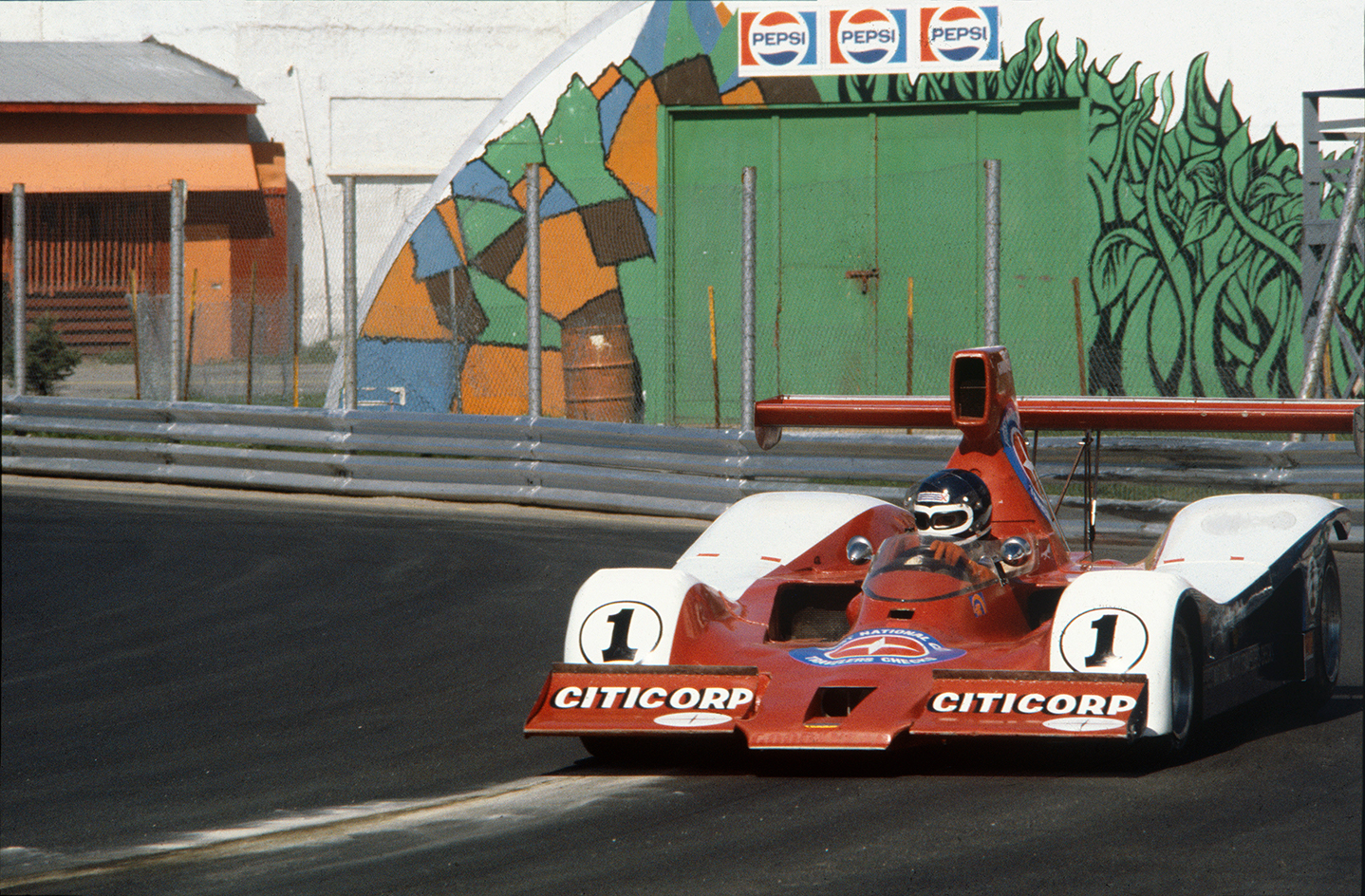 “I was maybe 19 when I was tested by Ken Tyrrell. I used to go to their home and it was really a family spirit. The Tyrrell team at the time was very small but Ken and Norah and their boys made my career in a way. It was the the sort of corner you turn in your life that changes everything. You meet people in life who have such an influence on your life and you realise later on if they wouldn’t have been there everything would have been probably totally different. So I’m very sensitive to that aspect of life.

“And Carl and Berni were pure joy. I drove the Can-Am with them in a period of time when I had many questions about where you come from, where you are going and who you are. It came exactly at the right moment to restore some confidence in myself and they did it with so much tenderness. I regret that when the page was turned in 1980 and as very often happens in the world you separate and you don’t see your friends as much as you want. I saw Carl in Goodwood some years ago and it was fantastic!

“Carl and Berni were so sweet and kind in a world that was already beginning to change. There was a lot of support and tenderness from them and from the mechanics. They were patient and dedicated. Carl gave me every opportunity and chance to have the best engine, the best setup and the best testing. It was very professional but made the difference was Carl was a great coach.

“It wasn’t easy because I raced the last half of the season in F1 so I was traveling in and out all the time. But the Can-Am races were a pure joy. The only reward in racing or any kind of sport is when you fill up your contract by winning and that’s what we did with Carl. I have only good memories of that time of Carl and the team but also the racing world at that time and the openness to the public and to the other teams.

“It was really a beautiful time and the goal was to win and that’s what we did,” Ickx added. “At the time I would have said, ‘I have won the Can-Am championship.’ But today I say, ‘We have won.’ In sport, it’s only the ‘we’ who counts to make the success and the spirit and professionalism given to the team by Carl and Berni was the best. Carl and Berni were really nice, sweet people. To me, it was outstanding to know them and drive for them. It’s more important maybe than the result.”

Carl is survived by his devoted wife Berni. He was a difficult man to get to know, but once you became his friend you discovered a lovely, warm-hearted man. As Ickx says, he was a man from another time. RIP Carl. 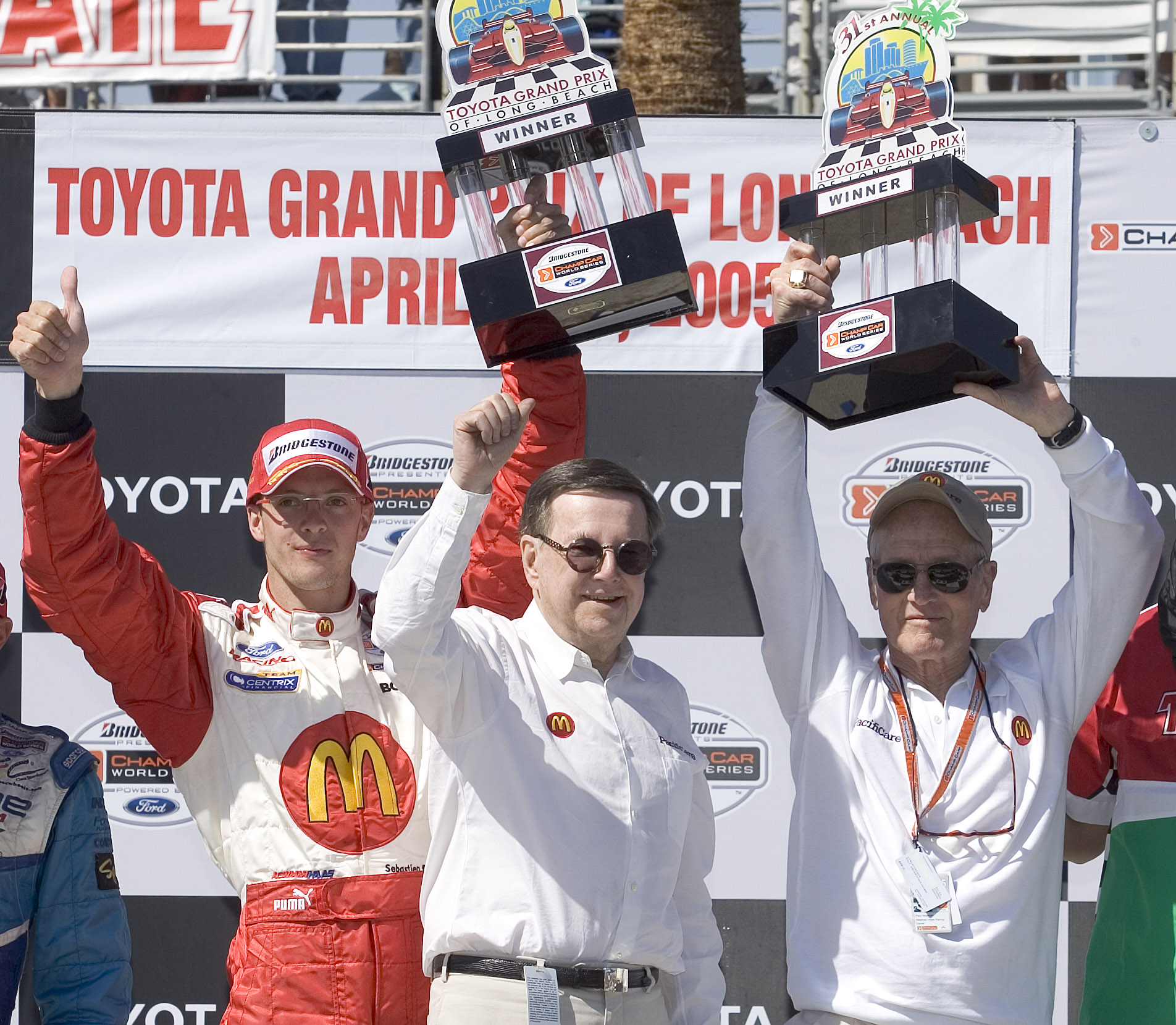