Fifty years ago next month, Graham Hill scored a surprise win in the 50th Indianapolis 500. Driving one of John Mecom’s Lola-Fords prepared by master Indy car chief mechanic George Bignotti, the race was Hill’s first start at Indianapolis and he qualified in the middle of the field then drove a steady but unspectacular race – emerging in the lead with just ten laps to go. 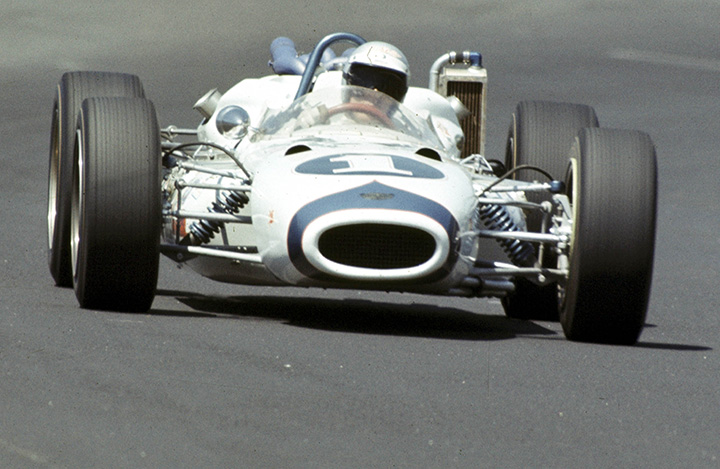 The 1966 Indy 500 got off to a bad start when Billy Foster’s car lost its nose cone as the green flag weaved. Foster spun and the ensuing melée involved half the field, eliminating eleven of the 33 starters, resulting in a red flag for an hour and a half. Favourites A.J. Foyt, Dan Gurney and Don Branson were out but fortunately, nobody was hurt.

Once the race finally got underway it featured a great battle between 1965 winner Jim Clark’s Lotus and Lloyd Ruby’s Eagle. But Clark uncharacteristically spun, not once but twice! He avoided hitting the wall both times and carried on, leading 66 of the 200 laps. Meanwhile, Ruby ran into refuelling problems before dropping out with engine trouble in the closing stages.

Jackie Stewart – also an Indy 500 rookie in 1966 – then led the race for 40 laps aboard Mecom’s other Lola-Ford, but his engine failed with ten laps to go, handing victory to team-mate Hill. Many people, Colin Chapman included, believed Clark had actually won the race for the second year in a row. Chapman was sure the officials had missed scoring one of Clark’s laps, but his protest was denied and Hill was declared the official winner with Clark listed in second. It was the only time two active F1 drivers and World Champions finished one-two at Indianapolis.

Meanwhile, the rest of the 1966 USAC Championship was all about Mario Andretti. USAC’s season opened at Phoenix in March and Andretti qualified his Brawner/Hawk-Ford on the pole, setting a new track record. In the race, he came under intense pressure from arch-rival A.J. Foyt.

After a ferocious duel they side-swiped each other while lapping a slower car on either side. The collision brought an end to the race for both of them, although Foyt was able to limp along a little further. “I guess both of us were a little stupid,” Andretti says. “It was one of those racing accidents that happen when you’re running hard like that. Nobody was to blame.”

At Trenton for the next race, Andretti was again on the pole with a new track record, and led more than half the race before cutting a tyre on some debris. A pitstop to change the damaged tyre dropped him down the field and he worked his way back to fourth before the race was stopped by rain.

The series then travelled to Indianapolis for the month of May where Andretti dominated practice and qualifying, taking his third straight pole of the year, setting a new record of 165.899 mph. He was challenged only by Jim Clark who was almost two mph slower, nobody else was even close. Foyt and Dan Gurney were the fastest second-day qualifiers, so they were back on the seventh row.

The month seemed too good to be true for Andretti and, sure enough, things turned sour on raceday. When the race was restarted after the opening lap multi-car crash, Andretti knew from the moment he stood on the gas that he was in trouble – his engine was running on only seven cylinders. He was able to stay ahead of Clark and the rest for a handful of laps, but then the engine started smoking and he was soon into the pits to retire from the race.

Andretti’s luck began to turn around at Milwaukee the next weekend. He took his fourth pole and track record in a row, but unlike the first three championship races of that year, he motored to the finish without any trouble to score his first win of 1966. He went on to win seven more races that year dominating the season taking nine poles and leading 1,142 of the year’s 2,083 laps. Andretti handily beat Jim McElreath to the USAC title with 3,070 points to McElreath’s 2,430.

Mario wrapped-up his second USAC title in October on the one-mile dirt oval at Sacramento even though he didn’t finish the race. Driving Clint Brawner’s Offy-powered dirt car he led most of the way only to have his transmission fail with just four laps to go. He was classified in tenth place, earning enough points to make it impossible with only one race remaining for either McElreath or Gordon Johncock to beat him.

The year finished for Andretti with a pair of wins in Phoenix. At the end of November he drove the Brawner/Hawk to victory in the season’s final USAC Championship race at Phoenix International Raceway after a serious duel with Parnelli Jones. Seven days later he won the season-closing USAC sprint race on the half-mile Manzanita dirt track with Wally Meskowski’s Chevy-powered sprinter. He was USAC Champion for the second year in a row and finished second to Roger McCluskey in USAC’s Sprint car series.

The following year Andretti won NASCAR’s crown jewel Daytona 500, scored his first of three wins in the Sebring 12 hours and beat the likes of Foyt and Richard Petty to the USA’s ‘Driver of the Year’ award. In 1968 he qualified a Lotus 49 on the pole for his first F1 race, the United States GP at Watkins Glen, and in 1969 he won his third USAC Championship and his first and only Indy 500 as one of the richest, most diverse careers in the history of the sport took shape.