When I wrote a few weeks ago about Mario Andretti and other drivers who achieved success across a wide variety of motor racing categories driving I neglected to properly credit Parnelli Jones who was a great all-rounder like Andretti, Dan Gurney, Mark Donohue, Jim Clark and Stirling Moss. Jones was also a rare bird, like Gurney, who was a successful team owner and car builder. Back in the ’70s Vel’s Parnelli Jones Racing in Torrance, California was a cross-town rival of All American Racers, building beautiful and fast race-winning Indycars. 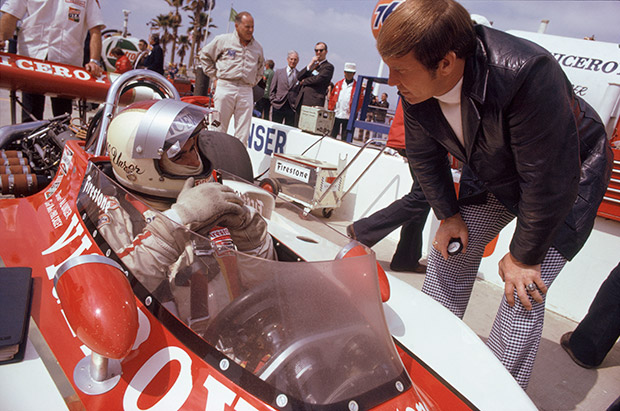 Parnelli started his career driving jalopies at the Orange Show Speedway in San Bernardino and won the IMCA and USAC sprint car championships in 1961 and ’62. In his jalopy days in particular Parnelli earned a reputation for settling arguments with his fists and his sharp features and eagle-eyed stare added to his tough guy reputation.

Jones set the pace at Indianapolis in his first two starts in 1961 and ’62 and finally came through to win the 500 in 1963. That was the famous race where Parnelli beat Jim Clark who was making his and the rear-engined Lotus-Ford’s Indy debut and there was some wrangling that Jones should have been black-flagged for an oil leak. During a lunch for the winner the day after the 500 Parnelli engaged in a scuffle with Eddie Sachs. Sachs and PJ were pals but Sachs decided to debate the matter.

Sachs loved to talk and was known as the ‘Clown Prince of Racing’ but he was also a very competitive driver who was on the pole at Indianapolis in 1961 and ’62. In the ’63 500 Sachs lost a wheel near the end after slithering around on a slick track from oil dropped by a few cars, not just Jones’s machine. 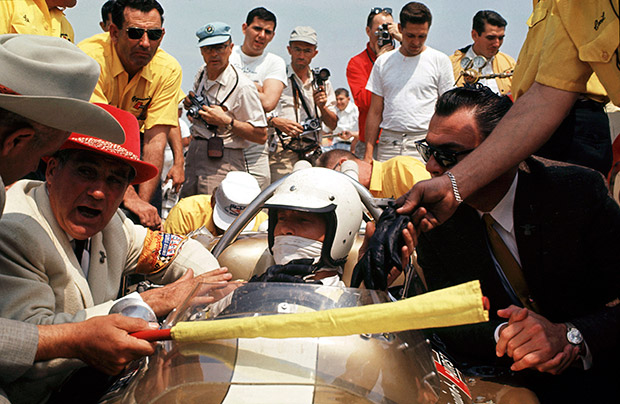 “The next day before the banquet we went to an Autolite luncheon at the old Holiday Inn across the street from the Speedway,” Parnelli recalls. “Sachs came over and said he wanted to congratulate me for winning, but he said they should have black-flagged me. I said, ‘Let me tell you something Eddie. First of all, the track was oily all day and I think you spun because your wheel was loose.’ ‘No, I spun in your oil,’ he said.

“I said, ‘No you didn’t Eddie. The track was oily all day long from a bunch of cars, not just mine.’ I said something like, ‘I think you’re full of shit.’ And he said the same back to me and we started arguing. I said, ‘I oughta bust you in the mouth.’ And he said, ‘Go ahead.’ So I let him have it.

“Eddie was such a great guy and the funny part about it was he had blood coming out of his mouth and a black flag in his hand and a guy took a picture of it. Eddie didn’t show up at the banquet that night but a picture of him was in the newspaper the next day.”

Neither man allowed the squabble to affect their friendship. “Eddie was the Muhammed Ali of racing.” Parnelli remarks. “When you got Sachs on a microphone you couldn’t get him off. But he was good for racing and we overcame our argument and were friends again after that.” 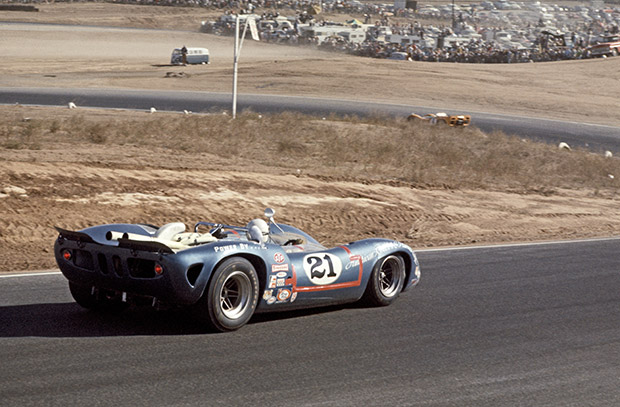 The following year Sachs and Dave MacDonald were killed in a fiery multi-car conflagration on the opening lap of the 500. After a restart, Jones led the race but had to bail out of his car when it caught fire during a pitstop.

Until 1964, Jones was known only as an oval tracker but in the fall of that year he drove one of Carroll Shelby’s Ford V-8-powered ‘King Cobra’ Cooper Monacos in the pair of fall sports car races at Laguna Seca and Riverside. At Riverside in October of ‘64 a crowd of more than 80,000 gathered to watch a field of 40 cars race in the LA Times GP.

Included in the field that day were Bruce McLaren in the original McLaren-Oldsmobile M1A Can-Am-type car, Jim Clark in a factory Lotus 30, Dan Gurney is his own Ford-powered Lotus 19, AJ Foyt in John Mecom’s Hussein-Chevy, Jim Hall and Roger Penske aboard a pair of Chaparral-Chevys, Bobby Unser in a Lotus 19-Chevy and Richie Ginther driving another Shelby ‘King Cobra’. McLaren led for a few laps but hit trouble and Parnelli took over, running away to a memorable victory as he handily beat Penske’s Chaparral and Clark’s Lotus.

Clearly, Parnelli had no trouble adapting to road courses but he famously turned down an offer from Colin Chapman to drive for the Lotus F1 team because he wasn’t interested in being number two to Jim Clark. Parnelli also ran four of the six inaugural Can-Am races in the fall of ‘66, driving a Ford-powered Lola T70 owned by John Mecom and prepared by George Bignotti. The car and engine were notoriously unreliable but Parnelli showed everyone what he could do at Laguna Seca when he came from the back of the grid to win the second of two 100 mile heats. 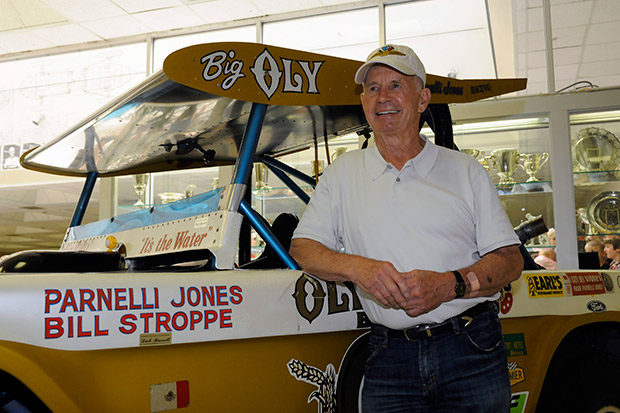 After leading most of the 1967 Indy 500 in Andy Granatelli’s STP turbine car, Parnelli retired from racing Indycars. But he continued to race in the SCCA’s Trans-Am series and also in off-road trucks. He beat Mark Donohue to the Trans-Am championship in 1970 aboard one of Bud Moore’s factory Ford Mustangs and won the Baja 1000 in 1971 and ’72, driving a Ford truck built by Bill Stroppe and setting a record that remains to this day. Parnelli’s last race was the Baja 1000 in 1974. Jones never raced F1, but he stands out as one of the sport’s greatest racers.

At the end of last year Parnelli published his biography As a matter of fact, I am Parnelli Jones written with Bones Bourcier. It’s an essential read for any fan of the sport.

Click here for more on IndyCar from Gordon Kirby