The Long Beach Grand Prix is the most influential street race in the world.

Wait a sec, you say, what about Monaco? Well, yeah, the Monaco GP is older and more glamorous, but it’s also sui generis – a glorified parade around the impossibly narrow streets of a tiny principality best known for being a tax haven for the super wealthy.

Long Beach, not Monaco, is the venue that established the template for the modern street race. It was Long Beach that served as the proof of a concept that’s now considered commonplace – nestling a temporary circuit within a city centre and focusing not merely on a single headline race, no matter how exalted, but on providing a full-service motor sport bazaar.

“You need to make sure that there’s something to interest everyone,” Jim Michaelian says. “It could be going into the Lifestyle Expo and playing with simulators. It could be grabbing little battery-powered go-karts at the Family Fun Zone. Maybe it’s Indycars. Maybe it’s watching Robby Gordon’s Super Trucks flying through the air. Maybe it’s drifting, which attracts a whole different demographic. If somebody says, ‘I had a good time. My family had a good time. My friends had a good time,” chances are that person is going to be back the next year.” 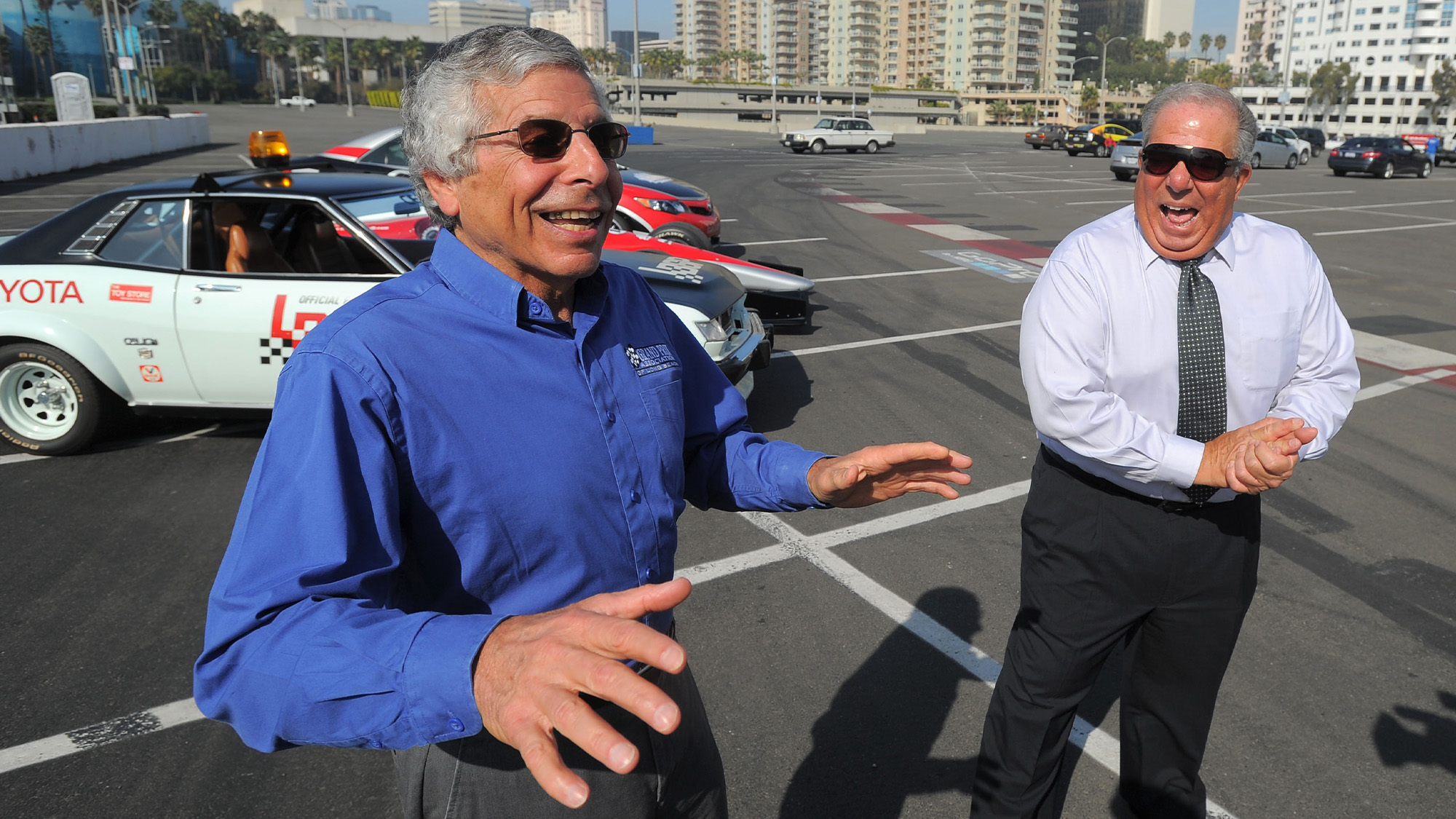 Michaelian is the president and CEO of the Grand Prix Association of Long Beach, the entity that puts on the annual Southern California extravaganza. (This year’s race, officially known as the Acura Grand Prix of Long Beach, is being held next week rather than its usual date in April due to the pandemic.) Now 78 but still spry and energetic, he’s the last of the major players who was around when the race debuted in 1975.

But despite being the longtime face of the race, he prefers to avoid the spotlight. “I don’t want to turn this into a Jim Michaelian story,” he tells me as soon as we connect via Zoom. “I want to focus on the success of the event more than my singular contribution to it. This has been a collective effort, and there are a myriad of people who’ve made significant contributions.”

The association employs 16 permanent employees. Come race week, the head count is closer to 1,000. It takes 53 days to transform the streets of Long Beach – a booming city with nearly half-a-million residents – into a proper race circuit and then another 20 to break it down. So a lot of people are involved.

Still, I inevitably cross paths with Michaelian every year I attend the race. Partly, this is because he often visits the room where drivers are herded for press conferences and media interviews. But I’ve also seen him working as a one-man security detail, forcefully shooing people out of a restricted area during a support race. I’ve also run into him at the front gate, where he’d ridden a scooter to check on ticket sales.

“On a temporary circuit, you have to absorb as much as you can,” he says. “By that, I mean everything from the operations side to the facility side to the customer-amenities side to the racing side. It’s not a permanent circuit. On Sunday night, it’s done with. There are no after-day sales. My staff knows not to schedule any long meeting for me over the weekend – 30 minutes at the most. I’ve got to get around. I’ve got to see what’s going on.” 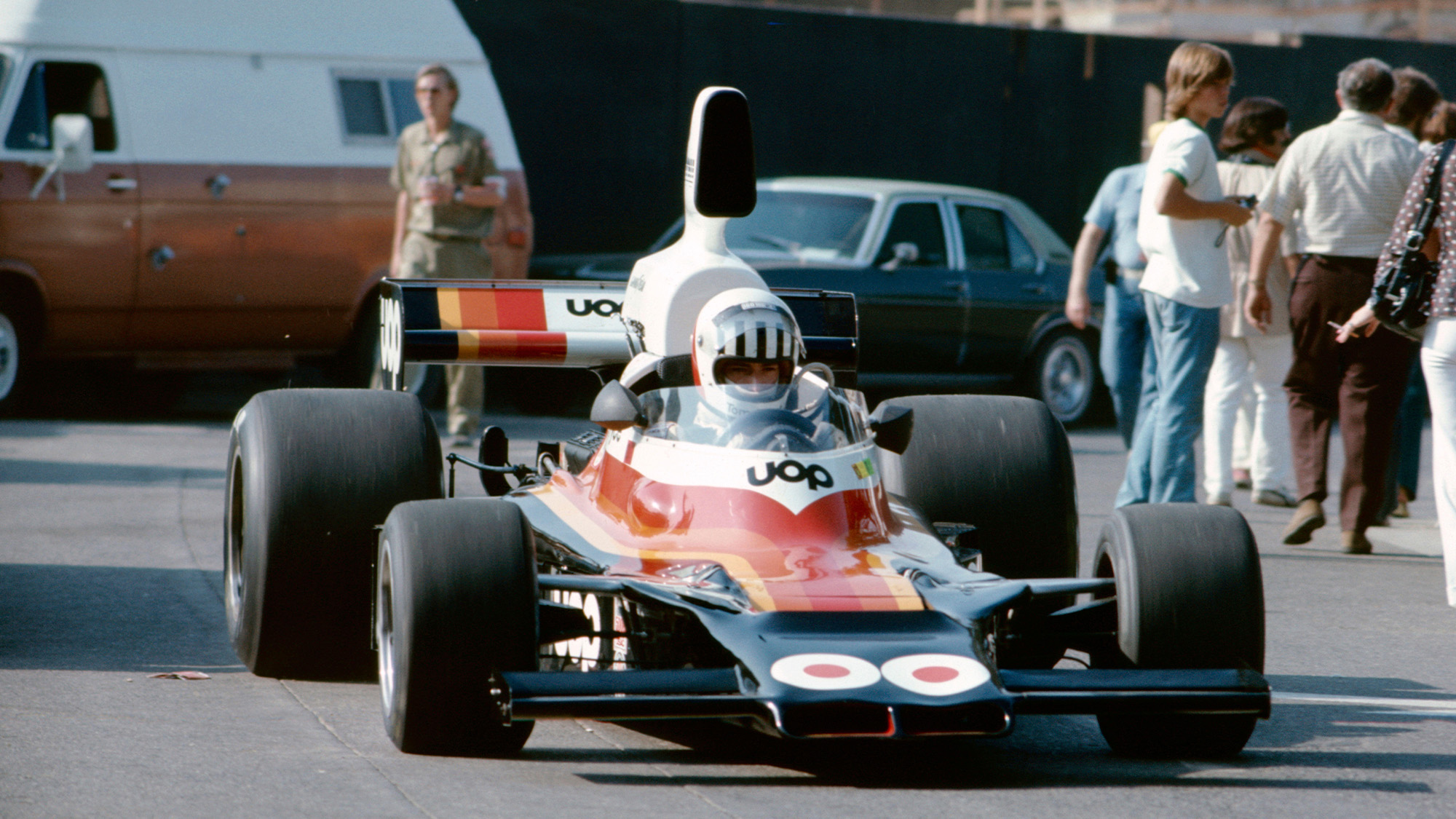 Michaelian has always been a details-oriented numbers guy. The visionary behind the race was expatriate British real estate agent Chris Pook, who was convinced that Long Beach’s seamy waterfront district, then rife with dive bars and X-rated movie theatres, was ripe for revitalisation. The vehicle for this transformation, he believed, against all odds and rational analysis, was transplanting the Monaco Grand Prix to sunny Southern California.

Michaelian, a diehard race fan with a business degree and entrepreneurial experience, applied for a job as soon as he heard buzz about the race, and he helped Pook sell local civic leaders on the event. To secure a Formula 1 date, Pook was required to stage a Formula 5000 race first. In 1975 more than 60,000 fans filled every seat at the inaugural Long Beach Grand Prix.

Now the bad news: Because Pook and company hadn’t secured the perimeter of the racetrack properly, only 37,909 actually paid, and the Grand Prix Association lost a small fortune. F1 showed up the next year amid much fanfare, and the race was an even bigger success – except that this time the association lost a LARGE fortune.

Salvation arrived in 1977 in the form of a providential puncture in the right-front tire of Jody Scheckter’s Wolf. With two laps to go, Mario Andretti slipped past to score an immensely popular victory in his Lotus 78. “If there was one pivotal moment in the history of the race,” Michaelian says, “it was when Mario flashed across the finish line and Colin Chapman threw his hat in the air.” 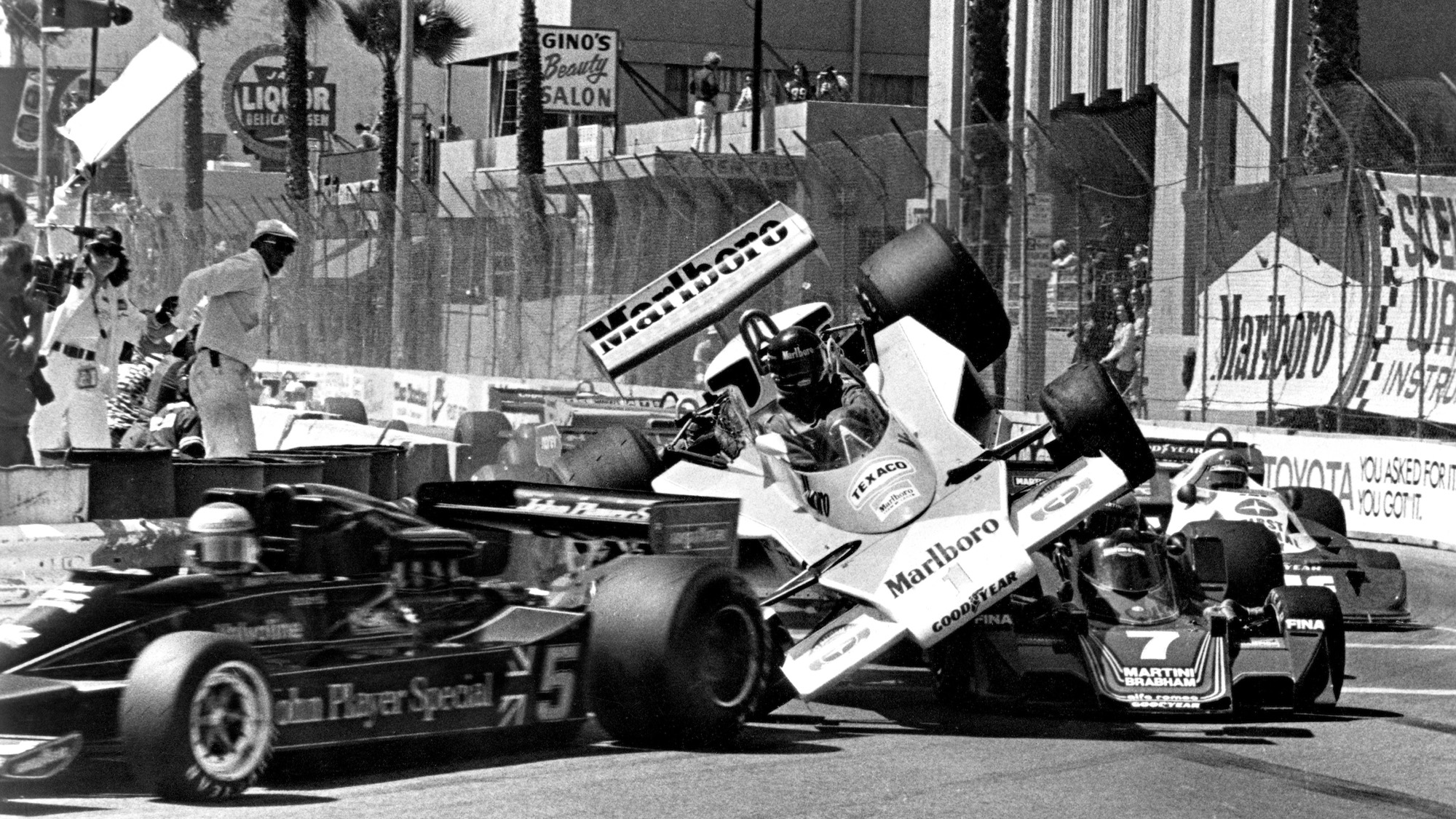 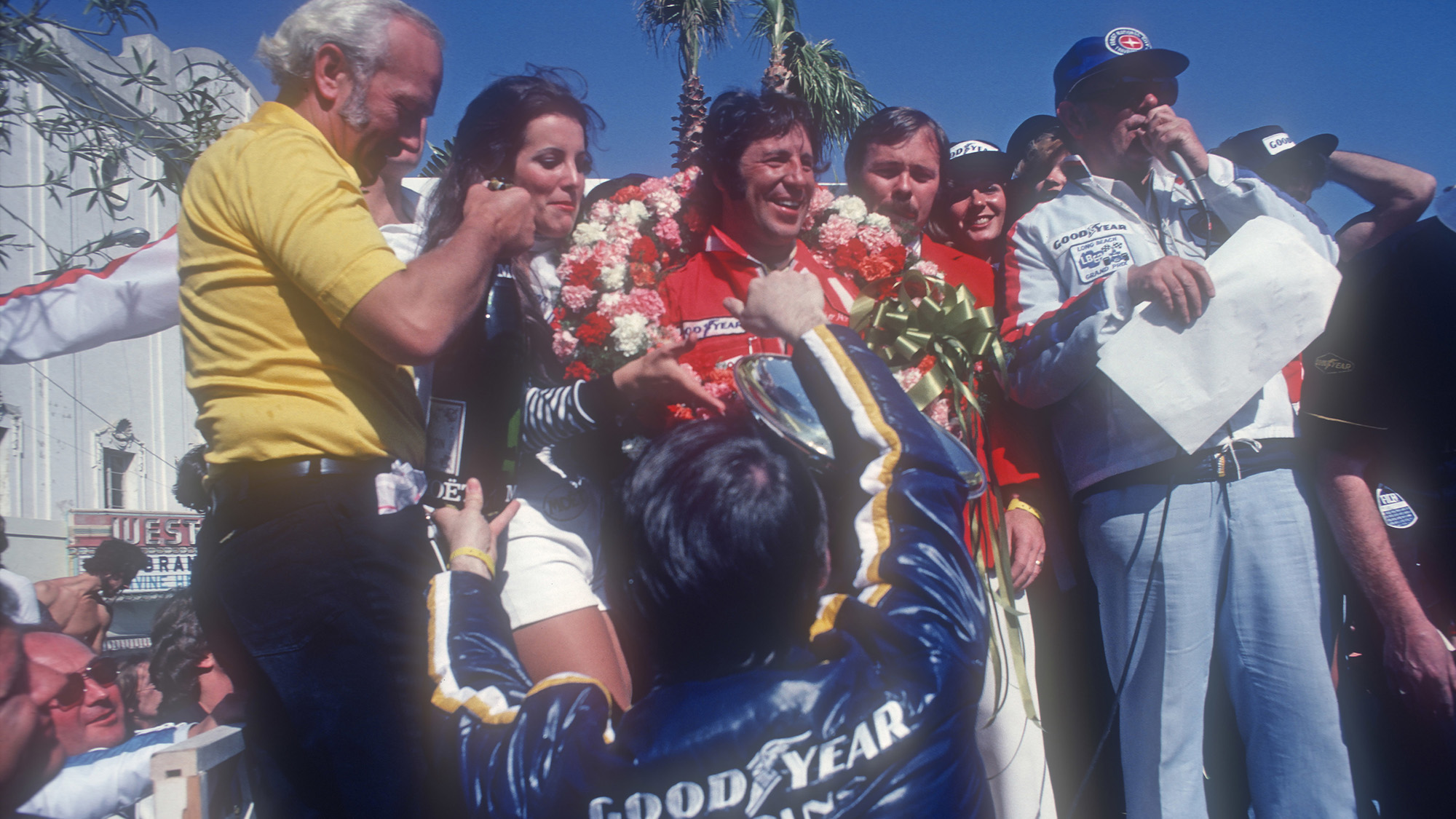 ...and celebrated victory on the podium with Colin Chapman (left)

In 1980, Toyota came on board as a title sponsor, which stabilised the association’s finances. Four years later, Pook balked at paying the F1 sanctioning fee and transferred his allegiance to Indycar. Long Beach quickly emerged as the biggest race on the calendar other than the Indy 500. Before long, it was routinely attracting more than 180,000 spectators a year to an event featuring a full slate of support races, a convention center filled with vendors and concerts.

The success of the Long Beach Grand Prix spawned dozens of copycats. Most of them failed because their promoters failed to understand the most important lesson that Michaelian has learned over the past 46 years. “People who go to street races aren’t necessarily race fans,” he says. “They’re interested in the spectacle. They want to be entertained. If we ever get away from that formula, we’re going to lose our audience.”

Michaelian, it should be noted, is a racer himself who’s competed in enduros at Spa, the Nurburgring and all over the United States. But he’s a businessman first and foremost. As he puts it: “I love endurance racing. But we’re not here to provide for our own satisfaction. We’re here to satisfy our customers.”

What a concept. I wonder if Liberty Media is listening.