One of the highlights of April’s Long Beach race weekend is the Road Racing Drivers’ Club (RRDC) dinner. Last year the guest of honour was Dan Gurney and proceeds from the event went to the Team USA scholarship programme. This year the honour fell to Parnelli Jones, and after dinner RRDC president Bobby Rahal and Dario Franchitti spoke to him about his career. Jones told us many stories, including how he made his name racing jalopy stock cars at the Orange Show Speedway in Southern California. 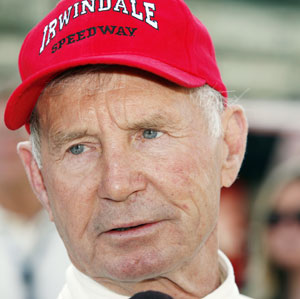 “As most people know my first name is Rufus,” said Parnelli. “My middle name is Parnell and when I first started racing I was only 17 years old. At that time you had to be 21 to race, so my buddy Billy Calder who was very artistic lettered my jalopy. He also made me a phoney identification saying I was 21. There was a little girl at school and her name was Nellie, so Billy used to call me ‘Parnellie’ just to tease me. When he lettered my car he put ‘Parnellie’ on it and pretty soon everyone was calling me ‘Parnelli’.”

Jones won in everything he raced – jalopies, midgets, sprint cars, Indycars, NASCAR stock cars and Can-Ams, plus at Pikes Peak, in Trans-Am and in off-road cars and trucks. “I’m the kind of guy who likes to see what’s on the other side of the hill,” said Parnelli. “I like driving different kinds of cars. I also like different challenges such as Pikes Peak, which is probably the most dangerous course I’ve ever driven, and I’ve been fortunate enough to win it a couple of times in a stock car.

“Ford called and wanted me to do Pikes Peak, but when I got there and saw the course and how far down the mountain you could go if you made a mistake I had some doubts. So I drove real hard and made sure I got to the top.”

Franchitti asked Parnelli if he had a favourite race car. “I never thought about it,” he said. “When I drove my roadster ‘Calhoun’ I thought that was the ultimate. But then you drive something like the Lotus or the STP turbine car and when you go back to the roadster you can’t believe how antiquated it is. So you learn as you go along.

“I think one of the problems with racing today is the fact that they keep putting more emphasis on the cars than the drivers. With all the computers and electronic stuff and the cars being identical, it makes it hard to distinguish who the good drivers are.”

Jones closed the evening with a story about the Riverside NASCAR race in 1967, when he won in a Bill Stroppe/Wood Brothers Ford on Firestone tyres. Parnelli was a Firestone dealer at the time and was one of only three drivers in the field on its rubber. After Jones beat Dan Gurney to pole NASCAR demanded that Firestone freight 400 tyres to the track to be available to the entire field. Parnelli got on the phone and made it happen, but NASCAR then insisted that an additional 100 tyres were needed. “Man, I was furious,” he recalled. “I had to go buy a bunch of older tyres to make NASCAR happy and then they made me start dead last!”

His dander up, Parnelli drove through the field and went on to win the 500-mile race by two laps from Paul Goldsmith. “When I took the lead I rolled down the window as I went across the start/finish line and gave Bill France the one-finger salute.” 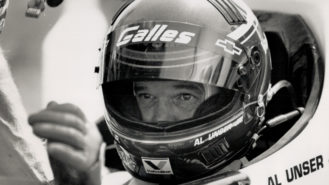