From last-corner denials to around-the-outside heroics, we’ve seen it all at the Brickyard over the years 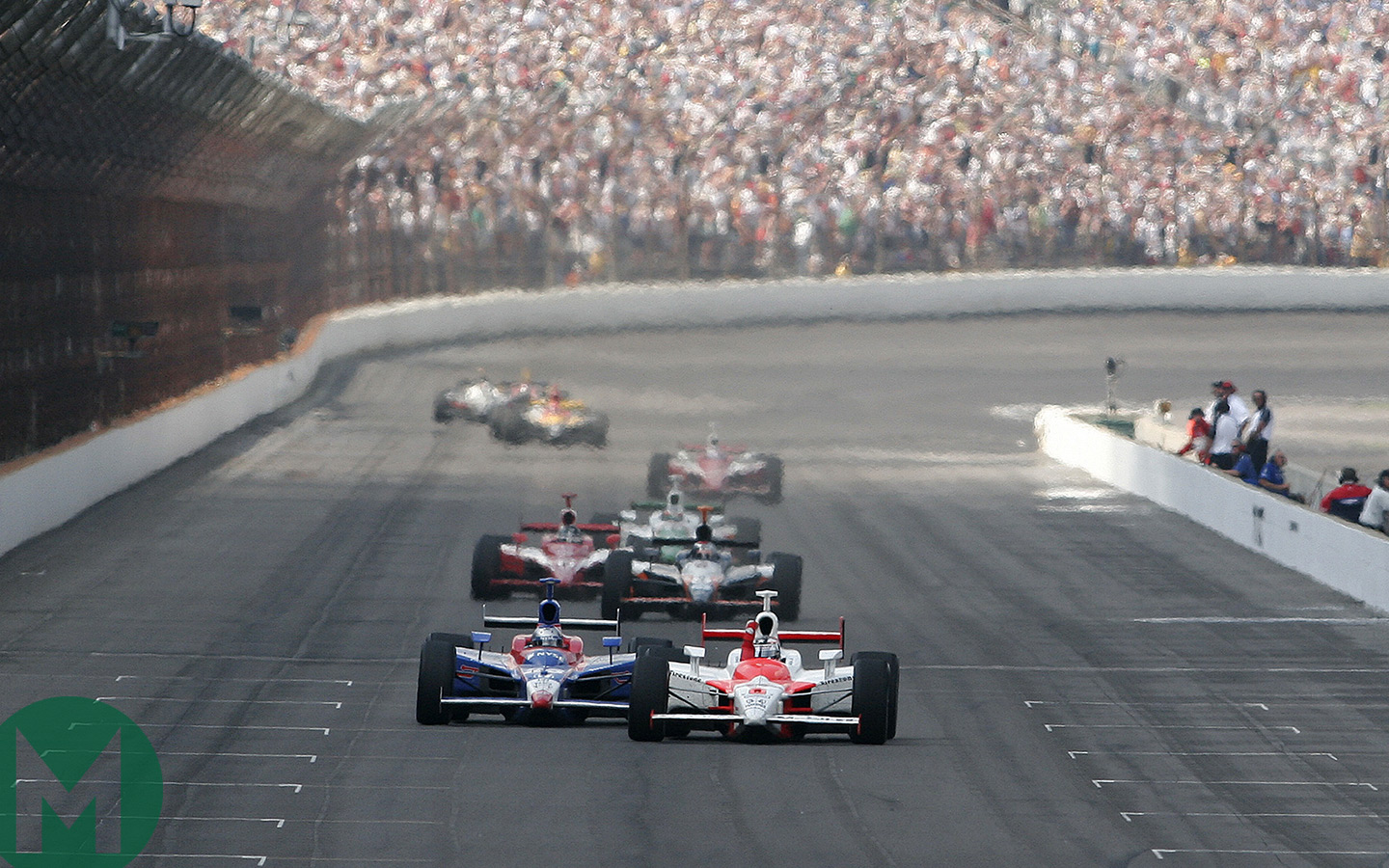 Having been denied in a thriller the year before, Ryan Hunter-Reay arrived at the Brickyard in 2014 with a record to set straight. Hélio Castroneves led the proceedings early on, but when Townsend Bell smashed into the wall with just 10 laps to run, the red flags were brought out and everything changed.

A seven-lap sprint to the flag would decide the race and as the white flags flew, it was Castroneves who held the lead – just – over Hunter-Reay, but then the American made a decisive move. Sweeping around the outside on the run into Turn 1, the American wrested the lead and forced the Brazilian to give chase through the last three turns. His pursuit fell just short and Hunter-Reay scored America’s first Indy 500 win in eight years by just 0.06sec in the race’s second-closest finish.

The 97th running of America’s great race tore up the record book – every page of it. Tony Kanaan’s victory may have seemed straightforward, all over in a rapid two hours and 40 minutes, but it was anything but a saunter. When the Brazilian wrested the lead from Ryan Hunter-Reay with three laps to run, he made the 68th lead change of the race – double the previous record of 34 set the year prior.

Kanaan’s average race speed of 187.433mph was a record too and he was one of 14 different drivers to lead the race – guess what, a record. And to cap it all off, 27 cars made it to the chequered flag, breaking a record as old as the race itself, dating back to 1911 when 26 cars finished. It was an indisputably great Indy 500, soured only by the fact that it all ended under caution.

Marking a century since the Brickyard’s first 500, the 2011 race was a historic one to win. Every winning car still in existence was present at the track and every driver to win the 500 still alive was in attendance. As the laps rolled on, the capacity crowd looked set to witness a fitting home victory at Indy’s centennial race on Memorial Day weekend. In an Army National Guard-sponsored car, JR Hildebrand was sitting comfortable out front – but it wasn’t to be.

Lapping a slower car as he exited the final corner on the very last lap, Hildebrand was forced off-line and on ragged tyres he smashed into the Turn 4 wall. Still pointing straight, his car set out on the trajectory of the finish flag, but Dan Wheldon was in position to snatch a famous win in what was tragically his final Indy 500. Hildebrand finished second, just two seconds behind.

It was as if the stars had aligned. Michael Andretti had come out of retirement to race alongside his son Marco at the 2006 Indy 500 in Andretti-prepared cars. Against all odds, with just four laps to run they led the race with an incredible one-two. Pre-race, few would have backed the Andrettis for victory, Michael having been absent from the sport for three years.

At the restart Michael led with Marco in tow, but soon Marco swept past his father to claim the race lead. With his own prospects of victory now gone, Michael did his utmost to hold back a charging Sam Hornish Jr., but he was soon through and in the clear in second. Charging hard on the push to the flag on the very last lap, Hornish Jr snatched the lead and victory from Marco Andretti by a margin of just 0.060sec, one of the closest finishes in the race’s history. The ‘Andretti Curse’ in action? Marco and Michael probably think so.

“Gonna run out of fuel…” They were the words that Team Menard was dreading to hear, but they came as no real surprise. Robby Gordon, running his fifth Indy 500, looked set to wrap up victory at the Brickyard in 1999, but pushing on harder than any other driver after his final pitstop, he was running his fuel down as close-as-a-dare to the finish. With the white flag in sight Gordon was still pushing on hard, but then the dreadful words were spoken.

“He’s out of fuel! He’s out of fuel!” screamed the ABC commentators, as a deflated Gordon rolled into the pits with just one lap to go. Concluding a 220mph game of hare and tortoise, it was Kenny Bräck of Sweden who swept through to claim the win.

A three-way fight became an epic duel in 1992, when fuel pump failure on lap 189 cruelly denied Michael Andretti after a race-long scrap with Al Unser Jr. and Scott Goodyear. Having led for 160 laps and building up a lead of almost half a minute, it appeared that the ‘Andretti curse’ had struck Michael again.

When the race restarted on lap seven, Unser and Goodyear continued to scrap. Unser led onto the last lap, but a wobble in the final corner and a good tow out of Turn 4 gave Goodyear a run. Running neck-and-neck to the line, it was Unser’s by a whisker, holding off Goodyear by 0.043sec in the 500’s closest ever finish.

It was a last-gasp, around-the-outside, Days of Thunder-style overtake that nobody – not even Rick Mears himself – could believe. Especially given that the 1991 race was not going Mears’ way. After rapidly losing touch with the leaders in the early stages, a flat tyre seemed to have sealed his fate. As so often is the way at Indy however, a caution shook the race order.

Michael Andretti was commanding the race out front, but Mears was quickly closing the gap. Then, seemingly from nowhere, Mears shot to the outside of Andretti and pulled off a stunning overtake to steal the lead. The victory, his fourth, levelled Mears with AJ Foyt on the all-time winners list – but this one may just have tasted the sweetest.

A tense encounter with an infamous outcome. With just two laps to run, Al Unser Jr. and Emerson Fittipaldi were dealing the final blows in an unrelenting scrap and, running past lapped traffic, Unser and Fittipaldi ran just inches apart down the back straight. Neither willing to yield ground, the two duelled into turn three – and then it happened.

The two touched and Unser was fired backwards into the wall, his heavy crash bringing out the yellow flags under which Fittipaldi wrapped up the first foreign win at the 500 in over 20 years. Deliberate contact or the result of a duel on the very edge? The jury is still out.

It was the most improbable of wins, or perhaps just the luck of the Irish. On lap 120, Danny Sullivan dived down the inside of Mario Andretti into turn one and pulled off an exceptional move for the lead but then, carrying too much speed, he lost control and spun at over 200 mph right in front of Andretti.

It was miraculous that Sullivan did not hit the wall, let alone collect Andretti’s car which had sneaked past the spinning Sullivan on the inside. Then, just to cap it all off, Sullivan reeled in Andretti and passed him to claim an incredulous ‘spin and win’ in one of Indy’s most memorable races.

At the time, it was the closest finish in Indy 500 history, but a large crash halted proceedings before the race had even begun. Once the race finally got away, Mears, Sneva and Johncock engaged in one of the most thrilling scraps the Brickyard had ever seen and after the final stops, it was Mears versus Johncock for the win.

Running side-by-side past the white flag, then wheel-to-wheel through Turn 1, it was anyone’s guess and as Mears slingshot off Turn 4 in Johncock’s tow, breaths were held around the Brickyard. Mears closed right in, but Johncock was ultimately denied by 0.16sec in a thriller.

Another record-breaking Indy encounter and another race of firsts. By qualifying for the race, Janet Guthrie became the first woman ever to qualify for the Indy 500. As a result, “In the company of the first lady ever to qualify at Indianapolis,” was added to the famous start command “Gentlemen start your engines!” Running just 27 laps, a mechanical issue ultimately cut her race short, but she finished an impressive ninth the following year.

Polesitter Tom Sneva eclipsed 200mph for the first time ever in qualifying, but come race-day AJ Foyt Jr wrapped up perhaps the most enviably piece of history by securing his fourth 500 victory at the Brickyard. The record has been matched, but never beaten.